The new president-elect has the authority to do so. It’s unclear whether he’ll use it. 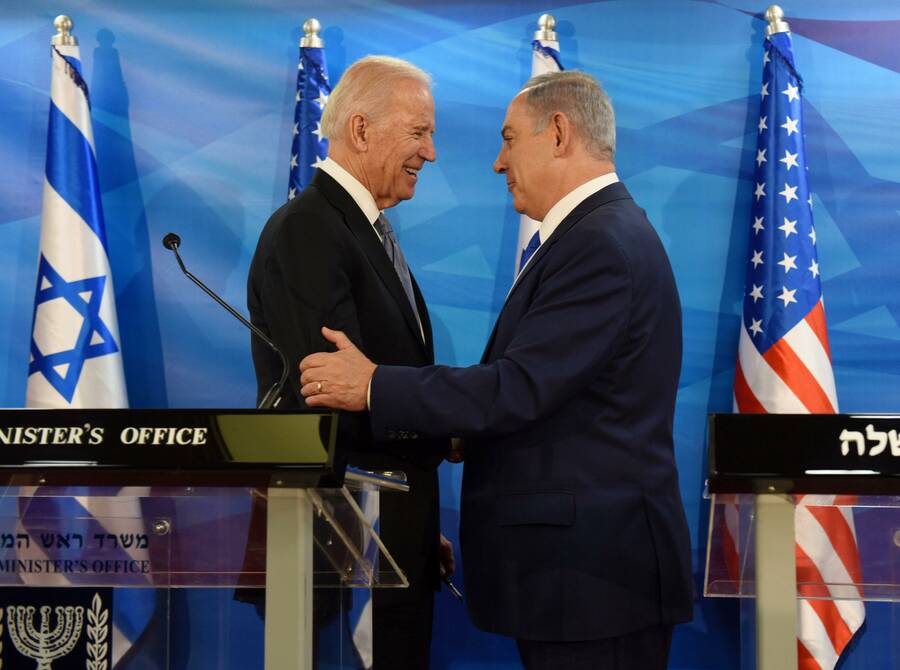 IN ITS FINAL WEEKS, the Trump administration appears to be shoring up its legacy of support for Israeli territorial-maximalist ambitions. Last Thursday, Mike Pompeo visited Israeli settlements in occupied East Jerusalem, the Golan Heights, and the West Bank—a first for a US secretary of state. Just one year ago, Pompeo reversed decades of US policy by announcing that the Trump administration would no longer consider Israeli settlements to be in violation of international law. During last week’s visit, he made two new declarations further entrenching Israel’s occupation and shielding it from criticism. First, he outlined a new customs guideline that designates goods manufactured in Area C of the West Bank—the portion of the territory under full Israeli control—as Israeli products, regardless of whether they were made by Israelis or Palestinians, effectively recognizing Israeli sovereignty there and further blurring the line between Israel and the territories it occupied in the 1967 War. Second, he announced that he had directed the Office of the Special Envoy to Monitor and Combat Anti-Semitism to “identify oranizations that engage in, or otherwise support” the Boycott, Divestment and Sanctions (BDS) movement,which he called a “cancer” and labeled “a manifestation of anti-Semitism.” “[A]nti-Zionism is anti-Semitism,” Pompeo declared.

These are only the latest items on a long list of policies implemented by the Trump administration to bolster Israel’s perpetual control of the occupied territories while stifling criticism of Israel and delegitimizing Palestine solidarity activism. That list includes: moving the US Embassy to Jerusalem; recognizing Israeli sovereignty over the Golan Heights; shuttering the Palestine Liberation Organization (PLO) mission in Washington, DC; ending US support for the United Nations Relief and Works Agency (UNRWA) and all assistance from the US Agency for International Development (USAID) to the West Bank and Gaza; greenlighting Israeli annexation of large parts of the West Bank; extending US–Israel scientific cooperation to include Israeli institutions in the West Bank; signing an executive order on antisemitism that conflates it with anti-Zionism and criticism of Israel; brokering normalization deals between Israel and several Gulf states; and shredding the Iran nuclear deal.

President-elect Joe Biden will inherit a Middle East policy that upended international norms and all but buried the two-state solution model. The question now is: What will Biden—whose record on the issue has been guided by the imperative that there be “no daylight” between the US and Israel—do to undo the damage wrought by Donald Trump?

“Almost all of this can be easily undone early on in a Biden administration by executive action,” said Dylan Williams, head of policy at J Street. Williams said a Biden administration could immediately repudiate Trump’s “Deal of the Century” peace plan and reiterate its opposition to unilateral annexation of territory. “It could and should revoke the ‘Pompeo Doctrine’”—open US support for Israeli annexation of the West Bank—“and reinstate the longstanding State Department legal opinion that settlements are illegal under international law.”

Williams added that Biden’s State Department could also reinstate the previous US customs guidelines on labeling of products from the West Bank, refuse to fund joint scientific research projects in settlements, and once again refer to Israel’s “occupation” in their reports. (The 2020 Democratic National Convention’s platform does not mention the word “occupation,” though it states a commitment to stopping settlement expansion.)

When asked what J Street’s top priority will be after January 20, Williams replied that it would be “restoring and building on the Iran deal,” which Biden has made clear he wants to rejoin, and which Israeli Prime Minister Benjamin Netanyahu is already lobbying against. Prior to its initial adoption, Netanyahu went to battle with Barack Obama over the deal, addressing Congress directly in 2015 with the hope of torpedoing it. Netanyahu insists that he opposes the US reentering the deal because Iran must not be allowed a nuclear weapon, but in the period since Trump withdrew from it, Iran has acquired more than 12 times the amount of enriched uranium permitted under the deal.

Biden has the authority to reverse much of the Trump administration’s policies on Israel/Palestine. But whether he will use this authority, and what it might cost him politically, is unclear. Williams believes there is “a tremendous policy gain to be made by reversing Trump’s steps quickly and without much fanfare.”

Diana Buttu, a Haifa-based lawyer and former adviser to the PLO negotiating team, is not so optimistic. She anticipates that Biden will restore funding to UNRWA and the Palestinian Authority and take “symbolic” steps like reopening a US consulate in East Jerusalem and reopening the PLO mission in Washington. But she doesn’t expect much else. “On bigger picture issues of statehood, independence and [Israeli] colonization, they won’t get anywhere near that,” Butto said. She does not believe that Biden will move the US Embassy back to Tel Aviv, rescind US recognition of Israel’s sovereignty over Golan Heights, or undo the labeling of settlements goods as Israeli products. “He won’t undo it because it means he will have to take a position on something he doesn’t want to take a position on,” Butto said, referring to the longstanding US position, enshrined in the Oslo Accords, that the final status of the settlements is to be resolved by the parties through direct negotiations.

Even if Biden does intend to reverse Trump’s policies, he will likely face strong Republican opposition. “This administration is coming in already on the defensive,” said Lara Friedman, president of the Foundation for Middle East Peace and a Jewish Currents contributing writer. “There’s a resilient narrative that Democrats have an antisemitism problem because some of them support BDS. To the extent that Biden tries to roll back things that happened under Trump, he and the Democratic Party will face accusations of being anti-Israel and antisemitic at every turn.” Friedman added. “Until they can own their policies and defend the spectrum of opinion on Israel that exists within progressive grassroots of the Democratic party, they will continue to hemorrhage political capital on all of these issues.”

The issue of BDS and the boundaries of acceptable discourse on Israel are likely to be thorns in the Biden administration’s side. Pompeo’s desigination of BDS as antisemitic has already put many pro-Israel Democrats in a difficult position, Friedman pointed out. Most Congressional Democrats, like Republicans, oppose BDS and have not taken issue with the International Holocaust Remembrance Alliance (IHRA) definition of antisemitism—which has been adopted by the State Department, and which defines anti-Zionism and certain criticisms of Israel as forms of anti-Jewish bigotry. Yet now Republicans are attacking Democrats in terms legitimized by the IHRA definition’s conflation of antisemitism and criticism of Israel—for instance, in the Georgia Senate run-off elections. Republicans have attacked Reverend Raphael Warnock, one of the two Democratic Senate candidates, for comparing Israeli policies in the West Bank to apartheid. To parry these accusations, he has renounced his own prior views and affirmed his opposition to BDS, which he said has “anti-Semitic underpinnings,” while stressing the right to protest and emphasizing his support for Israel’s right to exist and for a two-state solution.

Williams said he expects the Biden administration to ignore the Trump administration’s equation of BDS with antisemitism. The Biden team, he said, "has made clear its opposition to BDS and will continue to oppose it on its own terms.” Biden’s campaign platform condemned BDS, but did not refer to it as antisemitic, and stated that Biden “does not support efforts by any democracy to criminalize free speech and expression.”

Kenneth Stern—director of the Bard Center for Study of Hate and an expert on antisemitism who drafted the IHRA definition—said Biden could stake out a moderate position on BDS and criticism of Israeli policies. “One of the themes Biden has been striking is that people with different points of views have to communicate across divides,” Stern told me. “It’s possible for him to strike that theme on this issue: that he opposes antisemitism and BDS, but silencing is beyond what we do in a democracy.”

Refusing to designate BDS as beyond the pale would reflect the positions of the Democratic Party’s base. In a January 2020 poll conducted by Brookings fellow Shibley Telhami, 48% of Democrats who had heard at least “a little” about BDS said they supported the movement, while only 15% said they opposed it. In a 2019 Data For Progress poll, 53% of Democratic voters said BDS is a legitimate tactic, while 12% disagree, and 35% are not sure.

Biden’s record on Israel has long been marked by a refusal to criticize the Israeli government in public. As if to test this, the Israeli government recently announced plans for constructing new homes in Givat Hamatos, a settlement in East Jerusalem that cuts Palestinians off from the neighboring city of Bethlehem. Netanyahu made a similar move in a different East Jerusalem settlement in 2010, while Biden was visiting Israel. At the time, Biden refused to issue a sharp rebuke of the new settlement construction and, against the advice of other Obama administration officials, opted to dine privately with Netanyahu that night. In 2016, when the US abstained from UN Resolution 2334 condemning Israeli settlements, allowing it to pass, Biden was one of just two officials that opposed the move, arguing that the US should not publicly confront Israel.

Biden has stated his opposition to Israel’s annexation of the West Bank, and Tony Blinken, Biden’s nominee for secretary of state, also recently reiterated the need to ensure that “neither side takes additional unilateral steps that make the prospect of two states even more distant or closing it entirely.” Yet the Israeli government continues to take unilateral steps of all kinds. Earlier this month, Israeli authorities demolished an entire Palestinian community in the Jordan Valley. The Israeli government is also planning to restart construction in the West Bank corridor known as E1, which both the Bush and Obama administrations warned would split the West Bank in two, rendering a geographically contiguous Palestinian state impossible.

“If Biden wants to restart a peace process and restore constructive relations with the Palestinians,” Friedman said, “there is no way he can do that with 60% of the West Bank off the table.”

Despite Biden’s ironclad “pro-Israel” credentials, the Trump administration has moved the baseline so far to the right that even Biden would likely draw criticism from Israel-advocacy groups were he to undo Trump’s policies. “Biden’s got years of public service as a well-established AIPAC loyalist. So that helps him, but once he’s in office that won’t matter,” Friedman said. “If he deviates from AIPAC policy, he will face scorn.”

Report
Vaccination Under Occupation
Israel has a legal responsibility to ensure that Palestinians in the occupied West Bank and Gaza are vaccinated. The question is one of execution on the ground.
Mairav Zonszein
Report
Searching for a Strategy
As Arab states normalize relations with Israel, Palestinians are struggling to build consensus around a new way forward.
Mairav Zonszein
Sign up for our email newsletter, featuring exclusive original content