Israel has a legal responsibility to ensure that Palestinians in the occupied West Bank and Gaza are vaccinated. The question is one of execution on the ground. 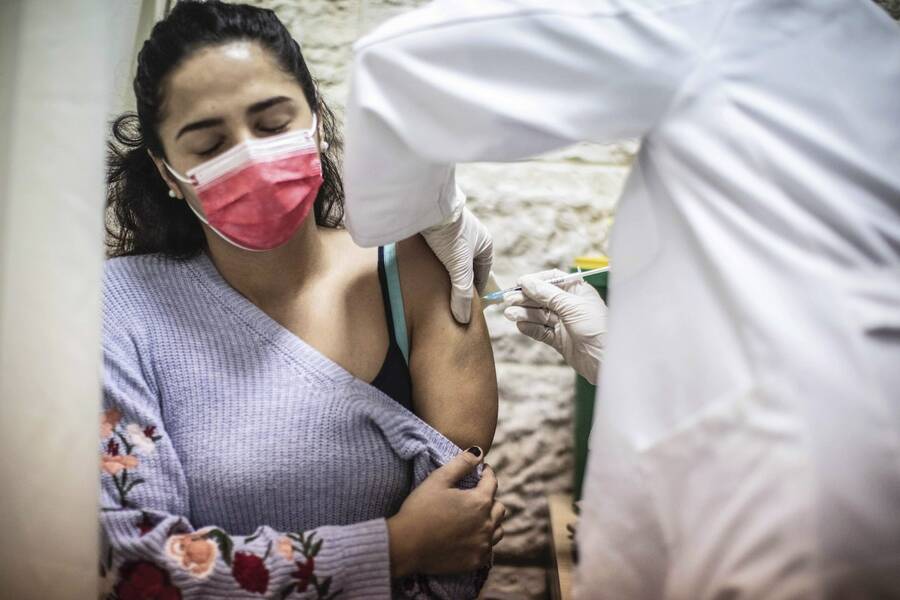 ON DECEMBER 19TH, Israel launched its ambitious Covid-19 inoculation program. In the weeks since, the country’s healthcare workers have already vaccinated over 1.9 million citizens, or 22% of its population, with the first dose of the Pfizer-BioNTech vaccine, taking the lead as top per capita vaccinator in the world. Over 70% of people aged 60 and older have already received the first shot, according to Health Minister Yuli Edelstein. Last week, Prime Minister Benjamin Netanyahu announced his government’s intention to inoculate all Israeli citizens over the age of 16 by the end of March—a goal that, if met, would also likely make Israel the first country to vaccinate its entire population.

Israeli officials and professional Israel-advocates alike have been quick to boast of Israel’s vaccination successes. When human rights groups warned that Israel was neglecting its obligations to the nearly five million Palestinians living under its ultimate control, some Israeli journalists and pro-Israel commentators created a discursive fog around the issue of Israeli responsibility, accusing news outlets like The Guardian of spreading falsehoods for reporting Israel’s exclusion of Palestinians in the occupied territories from its vaccination program, and smearing those who shared the coverage, like Canadian MP Charles Angus, as promoting antisemitism.

For Israel’s defenders, the argument hinges on the assertion that Israel and the Palestinian Authority (PA) are two separate, autonomous entities, individually responsible for their own populations; this argument is being reinforced by the PA’s insistence that it is going to carry out its own inoculation program. But international law is clear that Israel has significant legal obligations to the health and well-being of Palestinians in the occupied West Bank and Gaza, especially during a pandemic. The question then is not one of responsibility, but of execution on the ground.

“Israel is responsible for the millions of lives of those under occupation—it is as simple as that,” said Michael Sfard, a leading Israeli human rights lawyer. Article 56 of the Fourth Geneva Convention—one of the pillars of international humanitarian law—stipulates that an occupying power is responsible for “ensuring and maintaining” public health in the occupied territories, which includes “the adoption and application of the prophylactic and preventative measures necessary to combat the spread of contagious diseases and epidemics.” But that doesn’t mean the Israeli government must directly vaccinate Palestinians in the West Bank and Gaza or provide them the same care as it does for Israeli citizens living within the Green Line. “The relationship between a state and its citizens is not the same as the relationship between an occupying power and its subjects,” Sfard told me. “[The] laws of occupation allow the occupying power to use local authorities and institutions in order to maintain the services the population needs.”

In the case of the West Bank, the most significant local institution is the PA, which reportedly expects to begin its own vaccination initiative in February or March. And while Israel is not necessarily expected to implement the inoculation program in the West Bank itself, under international law, Israel is responsible for its overall success. Article 55 of the Fourth Geneva Convention requires an occupying power to ensure medical supplies are provided “if the resources of the occupied territory are inadequate.” Israel is expected not only to enable the Palestinian Authority to vaccinate the Palestinian population in the West Bank and Gaza, but also to step in when necessary. “If the PA fails, or if the PA is unable to perform those tasks,” Sfard said, “then this would be a violation by Israel” of international law.

Israel’s provision of vaccines solely to settlers in the occupied West Bank contravenes other aspects of international law. On December 30th, Health Minister Edelstein tweeted a photo of himself visiting an Israeli health clinic in the West Bank settlement of Kiryat Arba, stating, “Settlements in Judea and Samaria are the backbone of the State of Israel. We are currently vaccinating the backbone of the country.” But while the settlers in Kiryat Arba, located on the outskirts of Hebron, are being vaccinated, their Palestinian neighbors are not. “That is a clear manifestation of apartheid,” Sfard told me. “While Israel may have differing programs in Israel and the occupied territories, it cannot make a distinction between residents of the occupied territories based on nationality.” Differential treatment of populations in occupied territories is not just a violation of international law; it also violates Israeli legal precedent. During the 1991 Gulf War, when Iraqi scud missiles hit Israeli cities, Israel’s High Court ruled that Israel had to provide gas masks to all Palestinians in the West Bank, due to fears of a chemical attack. If settlers are getting vaccinated, their Palestinian neighbors need to as well, Sfard explained.

Israeli and international human rights organizations are in agreement on this point. Amnesty International issued a statement denouncing the vaccination of settlers but not Palestinians, saying it “highlights the institutionalized discrimination that defines the Israeli government’s policy towards Palestinians.” Two hundred rabbis have signed a petition organized by the Israeli group Rabbis for Human Rights, calling on Israel to proactively expedite distribution of the vaccine to Palestinians, especially in Gaza, on moral grounds. “Judaism teaches a moral imperative not to show indifference as our neighbor suffers, but rather to mobilize and offer help in times of need,” the petition reads.

Israeli officials and some Israel advocates have implied that Israel bears no responsibility for vaccinating Palestinians. They assert that Palestinians have not requested or refused help (a claim that has no legal bearing on Israeli responsibility), or that the Oslo Accords absolved Israel of its obligations to the Palestinians by delegating matters of public health to the PA. In fact, Article 17 of the 1995 Interim Agreement specifically calls for cooperation in all matters of health, specifically during a pandemic: “Israel and the Palestinian side shall exchange information regarding epidemics and contagious diseases, shall cooperate in combating them and shall develop methods for exchange of medical files and documents.”

The idea of the PA handling the rollout entirely on its own belies the reality of its dependence on the Israeli government. “Israel’s occupation has left the Palestinian healthcare system undersupplied and with insufficient medical facilities,” Dr. Yara Hawari, a senior policy analyst  at Al-Shabaka, wrote in Al Jazeera. Just as the PA depends on Israel for its electricity, access to water, and even the salaries of its own officials, it is likewise hard to imagine a response to the pandemic independent of Israel. “The responsibility to ensure vaccination in some ways is even larger when you have an occupied people who has no civil rights or political power to impact their fate,” Sfard said.

Nonetheless, the PA’s lack of sovereignty has not stopped its officials from attempting to conduct public health policy as if it were an independent state. The PA applied for and received financial support for immunizing up to 20% of its population through the Gavi COVAX Facility, a global initiative recently established to support developing countries with vaccine rollout. According to the World Health Organization (WHO) and the Palestinian Ministry of Health, the PA also plans to procure vaccines for an additional 40% of its population through various other measures, including purchasing 2 million doses of the AstraZeneca vaccine directly from the drug company. This plan would provide coverage for all Palestinian adults. Yet the first vaccines won’t come in for at least another month, creating a huge discrepancy between the rate of inoculation of two populations living side by side. (As of January 6th, the WHO recorded over 162,000 cases in the occupied Palestinian territories; 1,663 people have died.)

“We are not requesting anything from Israel,” said Dr. Yasser Bozyeh, director general of public health in the PA Health Ministry. “Nor are there bilateral negotiations [involving Israel] with any company because we are a state as mentioned by UN resolutions,” he added, referring to the United Nations’ 2012 recognition of the State of Palestine. Asked if Israel had covertly transferred several dozen vaccines to the PA, as Israeli journalist Gal Berger reported for Israel Public Broadcasting last week, Bozyeh replied, “We did not receive any vaccine from Israel nor asked to provide us with them. Israelis themselves don’t have enough vaccines for their people.” Bozyeh added that while Israel is obligated under international law to provide a vaccine, “it can be done by our politicians and human rights organizations.”

Middle East Institute analyst Khaled Elgindy has pointed out that, “setting aside Israeli legal obligations,” the arrangement between Israel and the PA works for both sides. “Israel doesn’t have to spend resources on Palestinians & the PA can keep pretending to be a state,” Elgindy tweeted. “But what looks like a political win-win is actually a lose-lose because the virus doesn’t discriminate.”

While neither side may have an investment in publicizing their cooperation, experts say cooperation is surely taking place, as it was when the pandemic first broke out last March and Israel briefed foreign ambassadors on its assistance to the PA in both the West Bank and Gaza. Dr. Gerald Rockenshaub, head of the WHO’s office in the occupied territories, painted a nuanced picture of what is happening on the ground. According to Rockenshaub, the Palestinians have asked Israel to consider providing vaccines to protect frontline health workers. “We have tried to advocate in that direction,” he said, adding that “regular exchanges continue to occur at a technical level between the Israeli and Palestinian ministries of health.” The WHO and UNICEF are handling the negotiations with Israel regarding the shipment of the vaccine across its borders as well as other essential logistics, and Rockenshaub said that Israel sent signals that it would not create obstacles to the PA’s vaccine implementation. Israeli health minister Edelstein recently told The New York Times that while Israel is prioritizing its own citizens, it is “in Israel’s interest to contain the virus on the Palestinian side.” (Several officials in the Israeli Health Ministry could not be reached or declined to comment.)

“It would make sense for the Israeli side to consider putting in an effort to support vaccination efforts on the Palestinian side,” said Rockenshraub, when asked whether the segregated rollout of the vaccine might hamper Israel’s ability to reach herd immunity. “The connectedness of both economies is clear. There are more than 140,000 Palestinian workers commuting daily to Israel,” he continued. “No one is safe until everyone is safe.”

Report
Will Biden Undo Trump’s Disastrous Legacy on Israel/Palestine?
The new president-elect has the authority to do so. It’s unclear whether he’ll use it.
Mairav Zonszein
Report
Searching for a Strategy
As Arab states normalize relations with Israel, Palestinians are struggling to build consensus around a new way forward.
Mairav Zonszein
Sign up for our email newsletter, featuring exclusive original content
Want original reporting and analysis on Israel/Palestine?
Sign up for the Tuesday News Bulletin.