The new season of Fauda takes the denigration of Palestinians to new depths. 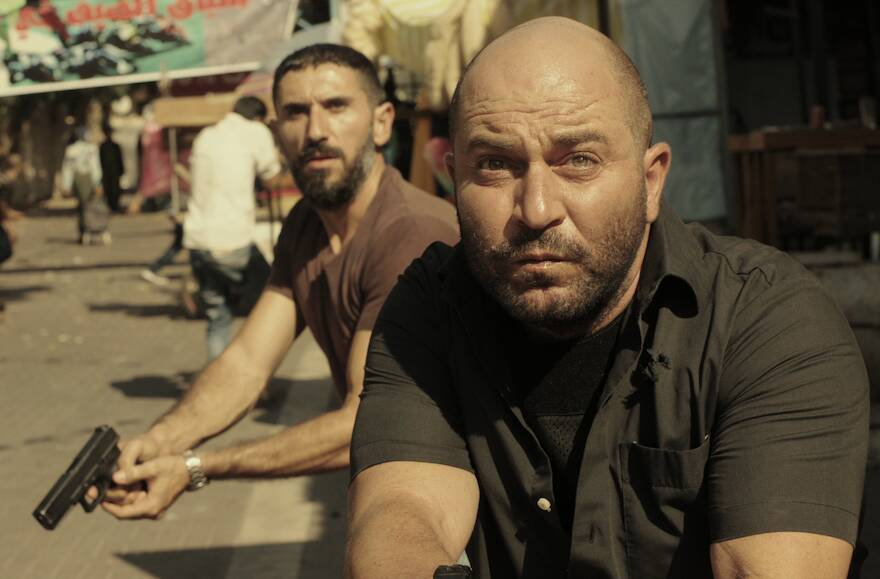 THE CREATORS OF FAUDA—the popular Israeli series about an elite anti-terrorist unit whose job is to battle, kill, or capture the Palestinian fighters they consider the most murderous—have sought praise for the distinction of treating the Palestinians on the show as human beings. The claim has never stood up to scrutiny: The show has always portrayed the Palestinian population of the West Bank, where Fauda has mostly been set, as a backdrop of scurrying, faceless creatures. In the new season, however, the denigration is taken to new depths.

Season three introduces Bashar Hamdan, the son of Jihad Hamdan, a Palestinian hero on the West Bank recently released after having spent 20 years in an Israeli prison. Desperate for male guidance and approval in Jihad’s absence, Bashar finds a substitute father in Abu Fadi, a boxer who becomes his coach. Abu Fadi, however, is really Fauda’s central character Doron Kavillio, a former member of the Israeli anti-terrorist unit who returns to action when special missions call for it; he has adopted this ruse in order to gain access to Bashar’s cousin Fauzi, a Hamas leader. The coach leads his charge to believe he has a great future in the sport, driving the young man to dream not of liberating his homeland, but of participating in a tournament in Amman. Over the course of the season’s 12 episodes, Bashar devolves from a decent if lost young man to an odious, murderous one. Though we are supposed to believe he has transformed from aspiring boxer to brutal terrorist because he was used by Doron, the change is so radical, so horrific, that it’s difficult to understand without recourse to some supposed native Palestinian pathology.

In this season, as in the previous ones, politics as such plays no part in the show’s understanding of Israel/Palestine. Though it presents itself as a portrait of the reality of the Middle East conflict, Fauda is really a police procedural with more firepower. While the show’s lack of interest in politics has always been a problem, it’s more striking in the wake of the excellent and chilling American-Israeli HBO series Our Boys, which demonstrates how politics can be integrated into a police procedural. In Fauda, neither Israelis nor Palestinians ever speak about the politics of occupation and expropriation, and not a single Israeli roadblock appears to remind us of the daily grind of Palestinian life. One house is blown up, and the unsafe water and blackouts in Gaza are passing parts of the series, but the fact of occupation—the daily injustices and indignities—are elided.

Though we never saw Israelis blocking passage in the West Bank, when the show shifts to Gaza in the final and climactic episodes, a Hamas roadblock seems to appear every 20 feet. Staffed by uniformed, masked, armed toughs, these roadblocks—which the Israelis almost always manage to bluff their way through—serve as occasions for the show to exhibit Palestinian incompetence and Israeli mastery. To an almost comical extent, the Palestinians here are for the most part presented as the most incompetent gunmen imaginable. In the world of the show, four Israelis can, with unlikely ease and consummate skill, take out dozens of Palestinians in even the most fortified locations.

While earlier seasons disguised these political problems in gripping narratives, in the third season, the show is far less aesthetically convincing. Each of the first two seasons can be viewed as retellings of Moby Dick: the elite unit is the crew of the Pequod, Doron is Ahab, and some particularly unpleasant foe is the white whale. This gave the series a structure and a direction that made it compelling (if repellent) viewing. But in the new season, the sea seems to be filled with Moby Dicks. Over the course of the series, the Israelis are on the trail of two different (though organizationally connected) Hamas fighters, as well as two kidnapped Israelis and their kidnappers. There are so many targets that, though I watched all 12 episodes over just four days, by the third day I couldn’t remember whom they’d originally been hunting. It all becomes exhausting and—as the body count mounts—tiresome.

One element of the third season does stand out as more fully developed than the earlier seasons: its depiction of family. The show is subtly attentive to how the struggle on both sides can destroy families or strengthen them. The members of the elite unit make up for rifts in their family lives—Doron has split up with his wife and become estranged from his son, largely because of his obsession with his work—by treating their small group of six as a family. (At one point, the widow of a slain member explicitly refers to them this way.) Members call each other “bro” in the subtitles, but the original Hebrew is a clear and unambiguous “ahi”: my brother. Every loss and injury is thus magnified.

On the Palestinian side, the complexities of family life come to the fore as Bashar’s family, despite their pride in the pater familias, question the impact of a life in the struggle on those left at home. The representation of the wrenching push and pull between the Hamdans’ desires to overthrow the occupation and keep their family intact is perhaps the one way in this season of Fauda follows through on its promise to depict Palestinians as human. And yet even this success is offset by the show’s obsessive focus on Palestinian collaboration and treason, as when Hamas shoots a family man in the face for working with the Israelis—a form of collaboration that the show has told us is the only way for his family to escape the hell of Gaza for the good life in Israel. The viewer can’t help but wonder: What kind of people would do this?

It’s true that Hamas’s definition of collaboration is an expansive, often vicious one. In April, a young Gazan was arrested when his video chats with Israeli leftists opposed to the occupation were discovered. But the show’s portrayal of Hamas assassinations as irrational acts of savagery betrays an ignorance and arrogance that speaks volumes. In fact, no resistance movement has ever acted otherwise, and however ruthless Hamas is, its members are fighting an occupying army. Their conduct in this regard is no different from that of the French Resistance during World War II, which killed many collaborators and informants. But because Fauda puts the viewer in the shoes of the occupiers, those fighting them are in a sense fighting us. One need feel no affection for Hamas to be repelled at being put in an implied position of support for a decades-long criminal occupation. As the third season progresses, Doron realizes that his betrayals of Bashar have turned his former charge into a monster. The oversimplifications and absence of politics in Fauda obscure the way in which this points to a larger point: that Israel has created a monster it will never slay. In the show, the Shin Bet’s Gaza desk chief says the Israeli agency always hopes that “this is the piece of shit whose killing will end it all.” No killing will, and Fauda serves to reinforce the monstrous image against which Israel will forever fight.