“Our Solidarity Will Defeat White Nationalism”

Stosh Cotler, CEO of Bend the Arc, describes getting arrested protesting Trump in Pittsburgh a year after the massacre. 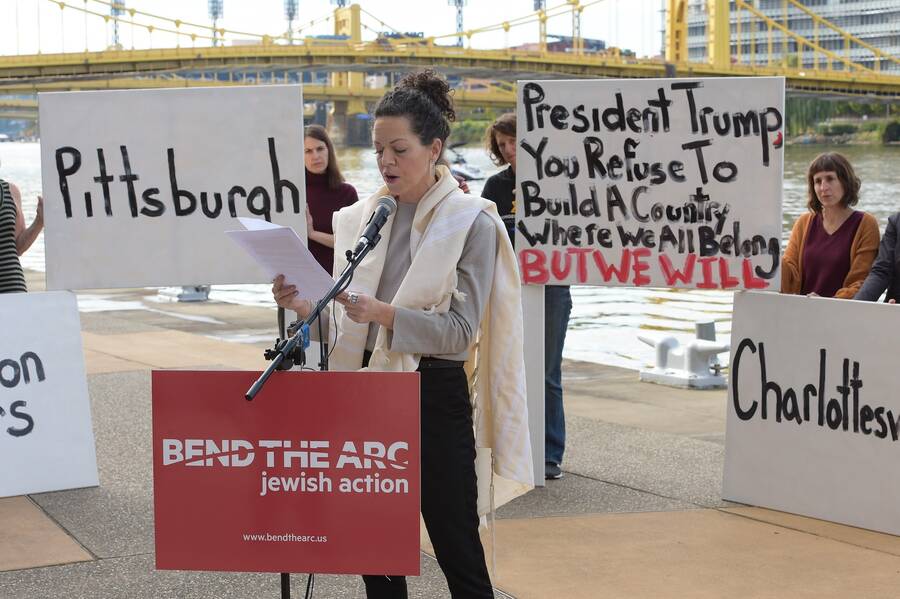 Last week, just days before the one-year mark of the massacre at the Tree of Life synagogue, Donald Trump visited Pittsburgh to promote fracking and rally his base at the 9th annual Shale Insight Conference. On the morning of October 23rd, a group of 14 Jewish protesters was arrested for blocking access to a street near the convention center where the president spoke; they were released that evening, and will appear in court in Pittsburgh on November 6th. The action, along with a subsequent one disrupting a speech the president gave later that afternoon, was organized by Bend the Arc, a progressive Jewish nonprofit formed in 2011.

Stosh Cotler, the CEO of Bend the Arc, was one of the demonstrators who was arrested. This week, Jewish Currents News Editor David Klion sat down with Cotler at Bend the Arc’s headquarters in Manhattan. They discussed the white nationalist threat Trump has helped incite, and what the Jewish left is doing to fight back. This interview has been edited and condensed.

David Klion: Tell me about Bend the Arc’s actions in Pittsburgh last week.

Stosh Cotler: Last year, after the deadliest attack against Jews in the history of the United States, Bend the Arc was on the ground in Pittsburgh to tell President Trump he was not welcome there until he denounced white nationalism. We blamed Trump, at least in part, for inciting that type of vigilante violence and for lending credence to the rhetoric that inspired the gunman.

We knew that Bend the Arc had to do something to commemorate the victims. So when we learned that Trump would be in Pittsburgh again, activists with Bend the Arc on the ground there felt it was very important to repeat the message we sent last year. He has done nothing over the past year to denounce white nationalism or to demonstrate a commitment to reducing violence against Jews, immigrants, people of color, Muslims.

We did a press conference on the Sunday before the actions to get the message out. Then on Wednesday, October 23rd, the day that he came, we did two actions: in the morning we nonviolently blocked a street near the convention center, and then in the afternoon we disrupted one of his events.

The first action started with a lovely gathering at a park a few blocks away from the conference. We sang and we talked about why we felt it was important to mark this day and to get a message to Trump and his enablers—and the general public—that white nationalism, which has gone from being on the margins to very much into the mainstream, is not acceptable, that it’s dangerous.

We then moved to an off-ramp from one of the iconic bridges in Pittsburgh. We had a really beautiful banner that said, “Our solidarity will defeat white nationalism.” I was one of the people who was sitting down, blocking the street. We continued to sing. We made it very clear to anyone watching that we were peaceful, that we were acting out of love. We were there because we believe that we have the right not to feel like we could be murdered when we’re praying or when we go out. We have the right to live our lives.

DK: So you and other protestors were then arrested?

SC: Yeah. After not very long, the Pittsburgh police showed up in full riot gear. They came out with their helmets with the shields on and with their extendable batons, holding them in a way that was unnecessarily aggressive. After they warned us that we would be arrested if we continued to protest, they moved toward us and did a set of highly militaristic maneuvers that I had actually never seen before, even though I’ve participated in many demonstrations. They surrounded each person in groups of six, and then they walked us backwards about 50-100 yards to the police van.

We were taken to the county jail, where we were held for 10 hours. This is by no means the same experience as being in jail against one’s will for what are ultimately crimes stemming from racism and poverty—which were the crimes of every single person I met in the jail. That said, the officers who we encountered, with very few exceptions, were, I would say . . . I found them menacing. It felt connected to why we were protesting in the first place—there have been links across the country between police officers and white nationalists.

One of the people who was arrested with us was wearing a tallis, and during the processing, her tallis was thrown into the garbage. And when she said to the officer, “That’s my tallis. That’s a prayer shawl. It’s a ritual object,” the officer said, “Yeah, and it’s in the trash.”

SC: There were moments when I was separated from our group in a way that I do not believe was necessary. I don’t want to speculate, but I felt like it was not a neutral experience. It felt significant to be a group of Jews in that jail, one year after Tree of Life.

DK: Did you get the sense that these officers were pro-Trump?

SC: One of the officers did say, “Make America Great Again.” Also, after I had been searched, I was led to another area to get a wristband for identification before being led to the cell, and the woman at the desk said, “How much did you get paid to be here?” I took that as a potential nod to the antisemitic conspiracy theory that George Soros pays activists to protest Trump’s policies.

DK: That’s unsettling to think that you’re at the mercy of police officers who are openly sympathetic to the president and his agenda. It really does speak to this alliance between law enforcement, white nationalists, and the president.

SC: Right. And at the second action that Bend the Arc organized in the afternoon, when some of our folks went into the event where Trump was speaking, one of our staff members was hauled out pretty physically by a Secret Service agent who also said something that aligned with this president’s agenda. [UPDATE: After this interview was published, Max Socol, Bend the Arc’s campaigns manager, tweeted: “I am the unnamed staffer who had the secret service encounter. What he said, in response to my incessant chanting of ‘Trump endangers Jews!’, was: ‘How can you say that?! Jews love Trump!‘”]

DK: I assume you’ve organized actions like this many times and you’ve been arrested before in circumstances like this. But it sounds like you were particularly jarred by this experience. Have you had other experiences where you felt this similar level of menace from the police?

SC: I have had many, many decades of experience doing political work, being at demonstrations, being at actions where there are police in riot gear, on horses. But it feels like a different moment when the police are responding in a highly militarized way within a context where our president is acting like an authoritarian dictator.

DK: Because, in this case, the specific injustice you’re protesting is right-wing violence visited on Jews, and you’re protesting the president and his role in that, and the police are literally jailing Jews who speak up about that.

SC: Right. And there’s a bitter irony, to be protesting violence that we believe was incited and encouraged on so many levels by this president a year ago, and then to be arrested by the police who are, themselves, acting as extensions of that political viewpoint. It’s chilling.

DK: This sounds very familiar to me from having witnessed a similar demonstration that several Jewish Currents staffers took part in last year outside the Metropolitan Republican Club on the Upper East Side, where they blocked the door and were arrested. They were being completely peaceful. It was a similar demand: that the club, which had just hosted Gavin McInnes and the Proud Boys, denounce white nationalism, which, of course, they did not do.

One prominent advocate of this position is the New York Times opinion editor and writer Bari Weiss, whose new book, How to Fight Anti-Semitism, devotes equal attention to the antisemitism of the right and the antisemitism of the left. It’s worth noting that she’s a Pittsburgh native who was bat mitzvah’d at Tree of Life, and who has made that central to her writings on the subject.

How would you respond to that framing, and how do you account for why Jews don’t universally perceive Trump and white nationalism as a threat?

At Bend the Arc, we believe that it is our moral responsibility and political imperative to oppose those on the right who are espousing antisemitism and who are actively seeking to promote a white nationalist ideology and creating the conditions for a gunman to go into the Tree of Life synagogue and murder 11 Jews during a morning prayer service.

For us, that means looking at how we are organizing ourselves and doing that work in solidarity with other communities who are also targeted. And we know that those on the right are not interested in changing. They actually rely on antisemitism in order to accomplish their political agenda.

We want to help those who are doing movement work on the left to learn about antisemitism. We do political education so that people know when they’re accidentally stepping into an antisemitic trope or perpetuating an antisemitic idea. What we’re finding is that in so many cases, people don’t know. And when they learn, they want to rectify the behavior and stand up in support of Jews.

DK: Central to the worldview of pro-Trump and right-wing Jews is this perception that the Republican party is an ally of Israel, and that the Democratic party, largely because of its emerging left wing and figures like Rep. Ilhan Omar, is a less reliable partner. How do the politics of Israel/Palestine relate to or complicate the work of Bend the Arc?

SC: Bend the Arc is an organization that works exclusively on domestic issues. So we do not have any position on Israel/Palestine, and it’s not a set of issues that we even comment on. I would say that we want to ensure that antisemitism is not being defined by the right. We are focused on fighting white nationalism, which, for us, always includes fighting antisemitism.

DK: What’s your takeaway from the past week? And where do you go from here?

SC: Last year, when the Bend the Arc activists in Pittsburgh organized a march a couple of days after the shooting where 5,000 people came out to say that white nationalism is not welcome in Pittsburgh—that was important. And something that was evident then is the value of the relationship between Jews and non-Jewish communities that have been under attack since long before Trump. It was also part of what made this last week feel important, and like a move toward the future we want to be building.

We see so clearly the possibility of building a country that we have never seen in practice: a truly inclusive multiracial democracy where the economy and our structures of government, the way we interact as communities, and power have been transformed. In these moments when things are so devastating and bleak, we continue to see glimpses of that future.

Art Reportage
Faces of Flight
Ukrainian refugees in Israel cannot be reduced to any single narrative.
Anna Lukashevsky
Newsletter
Not Quite a Green New Deal
The Inflation Reduction Act is only a fraction of what climate activists demanded—but it’s a start.
David Klion
Sign up for our email newsletter, featuring exclusive original content
Short on time?
Sign up for our weekly Monday roundup of everything you missed in Jewish Currents last week.