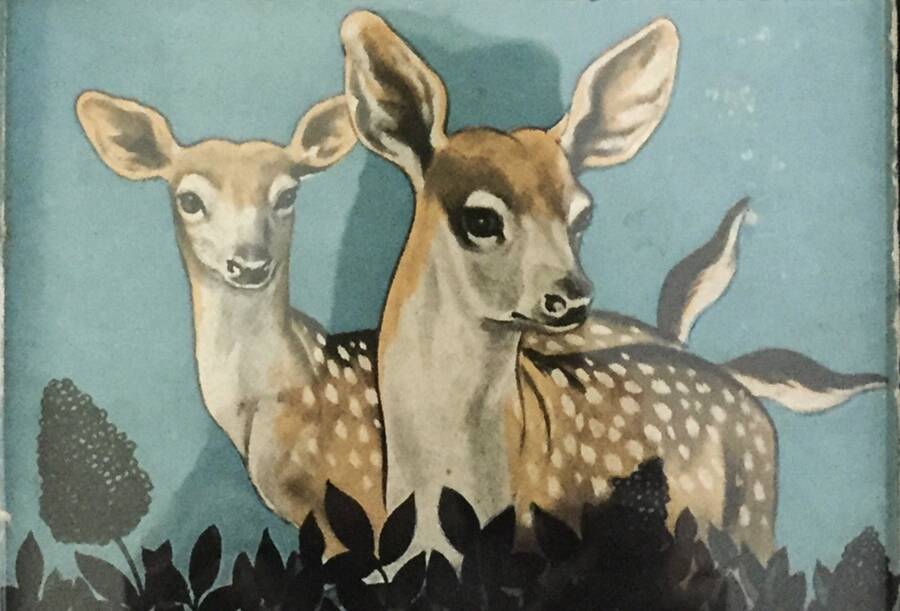 Detail from a 1929 cover of Felix Salten’s Bambi.

In “Matrilineage,” Susannah Sharpless makes clear that inheritance is not linear. Trauma propels anxiety unevenly across generation and circumstance. This is manifest in the line breaks, where meaning shifts sharply, an expression of both precarity and possibility. “I learned that not only birth could name,” Sharpless writes. Her forked statement registers harm’s indelible marks, even as it testifies to the ways that destruction and creation can share a root.

I was in New York that week, in a lobby,
waiting to speak to someone
about one day being paid for what I was willing to do for free.
Behind the front desk was a book about Bambi’s Jewish roots.
I knew just from the font that meant the Holocaust,
the letters red against a black background.
Later, mid-sentence, in the middle of the interview,
something gray began worrying my left eye:
panic, that birthright.

I had thought I was full up with fear
but I guess I will always have to make room for the ancestral
or it will make itself a room in me,
like my grandmother insisting that I was hungry
when she saw me, pulling from the freezer
tubs of chicken soup choked with spikes of golden ice.
If my grandmother had seen me in that room
she would have thought I was so skinny,
would have thrown up her hands in despair.

Afterwards I googled the book and learned
the author says what makes Bambi essentially Jewish
is persecution at the hands of strangers.
I thought then of the time a friend’s father
offered us the meat of a deer he’d killed and called venison
and I learned not only birth could name.

I’ve never seen Bambi but I know hunters shoot the mother
and I can feel the spasm of the dark wood,
the watchful yellow eyes of the spared.
I once expressed an adolescent spiritual indecision
between the faith of my mother and the faith of my father
and my grandfather said, “The Nazis didn’t let your cousins choose.”
When I finally moved from Indiana to New York,
I wasn’t half-and-half anymore: the devout told me
I was Jewish, everyone else heard
I was nothing. They all knew too much
about inheritance.

Susannah Sharpless is a writer from Indianapolis, Indiana.