I Need My Blood

Itzik Feffer Translated from the Yiddish by Moriel Rothman-Zecher
February 25, 2022 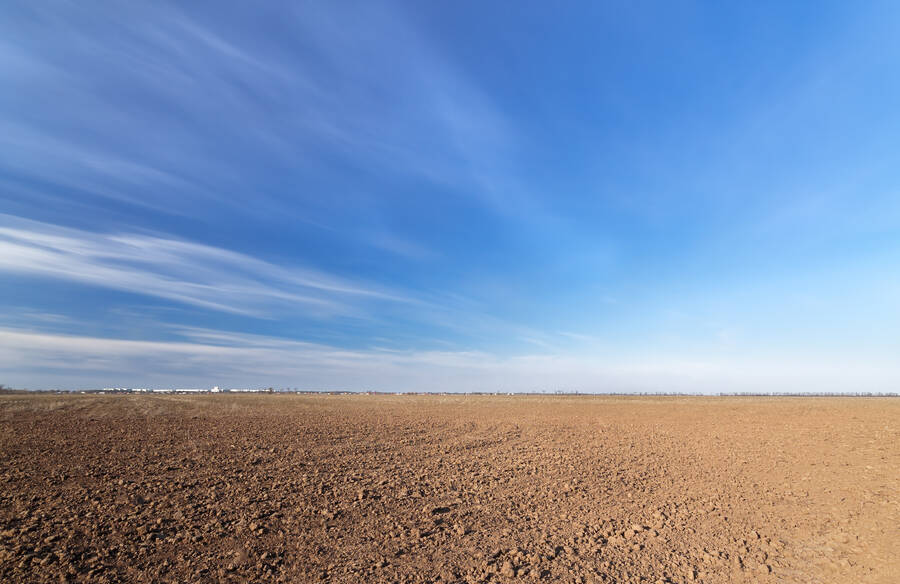 The Soviet Yiddish poet Itzik Feffer, born to a poor Jewish family in the Ukrainian city of Shpola in 1900, spent most of his life in pursuit of revolutionary ideals. At age 17, he joined the Jewish Labour Bund, a secular, socialist party that sought to unite Jewish workers in alliance with the wider movement for a socialist and democratic Russia. At 19, Feffer enlisted in the Red Army. That same year, two separate anti-Bolshevik factions—the White Army led by General Anton Denikin and a Ukrainian nationalist militia led by Nikifor Grigoriyev—carried out brutal pogroms in his hometown.

During the Russian Civil War, between 1919 and 1923, as many as 200,000 Jews were murdered in pogroms. Perhaps it is these antisemitic massacres that Feffer’s speaker references in “ikh darf mayn blit” (“I Need My Blood”), written around 1925, when he proclaims, “I will not spill my blood for naught.” It is not the bloodshed but the threat of meaninglessness that haunts Feffer’s speaker. Indeed, awakened by the “hot bell”—the call of the Soviet dream—he is willing to die for the Soviet future.

Over the next two decades, Feffer, a prolific, prominent figure in the world of Soviet Yiddish poetry, advocated both for the Soviet cause and for Jewish safety. He served as vice chairman of the Jewish Anti-Fascist Committee, formed during World War II to galvanize global support for the Soviet Union’s fight against Hitler. For Feffer, solidarity with the Jewish people and allegiance to the Soviet Union were synonymous. In his well-known 1941 poem “ikh bin a yid” (“I am a Jew”), Feffer wrote: “ikh bin a yid vos hot getrunken / fun Stalins vunder-kos fun glik (“I am a Jew who has drunk up / joy from Stalin’s wonder-cup”). But his loyalty was not reciprocated. In 1948, Feffer, along with other leading members of the Jewish Anti-Fascist Committee, was arrested and falsely charged with “counterrevolutionary crimes,” including treason and espionage; “ikh bin a yid” was used as evidence against him. He and 12 other Soviet Jewish cultural leaders—poets, novelists, translators, editors, scientists—were executed on August 12th, 1952. This date, which came to be known as “the Night of the Murdered Poets,” has loomed large in Jewish memory; it was commemorated annually by activists in the movement for Soviet Jewry. As a result, in the English-speaking world the facts of Feffer’s murder are far better known than the facets of his poetry. Reading “ikh darf mayn blit” now allows us to spend time in the texture of Feffer’s Soviet idealism and Yiddish revolutionary fervor, inviting us to be present with a past in which a multiplicity of futures is still possible.

Listen to Moriel Rothman-Zecher read "I Need My Blood."

(English follows the Yiddish, below.) 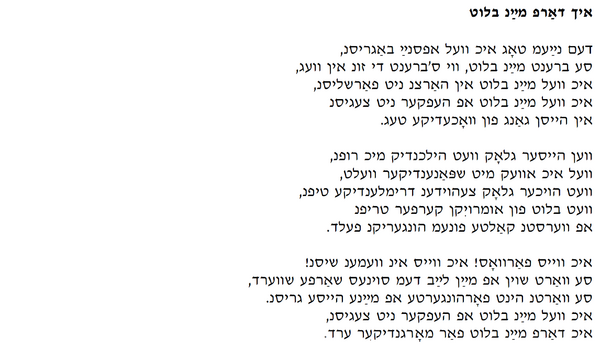 I Need My Blood

I send my greetings anew unto this day, my blood is burning, as the sun burns on the way, I will not lock my blood inside my heart, neither will I shed my blood for naught in the hot going of the common day. When I am summoned by the hot bell’s peal, I will be done with this world, its strident zeal, the high bell will quake the dozing depths, blood will drip from restless bodies yet upon cold miles of the hungry field. I know why! I know to shoot a man! My enemy awaits my body, sharpened blade in hand, My hot greetings are awaited by ravenous mutts. I will not shed my blood for naught, I need my blood for tomorrow’s land.

Itzik Feffer (1900–1952) was a prominent Soviet Yiddish poet who served as vice chairman of the Jewish Anti-Fascist Committee. His books include Vunderland (Wonderland) and Shayn un opshayn (Light and Reflection). He was executed for “counterrevolutionary crimes” on what came to be known as the “Night of the Murdered Poets.”

Moriel Rothman-Zecher is the author of the novels Sadness Is a White Bird, for which he received the National Book Foundation’s “5 Under 35” honor, and Before All the World, which will be published by Farrar, Straus and Giroux in November. His poetry has been published or is forthcoming in Zyzzyva, Barrelhouse, The Common, Paper Brigade, Colorado Review, and elsewhere.