Far Away, Deep Inside

Devra Freelander’s climate conscious works ask: What does it mean to love what you destroy, and to destroy what you love? 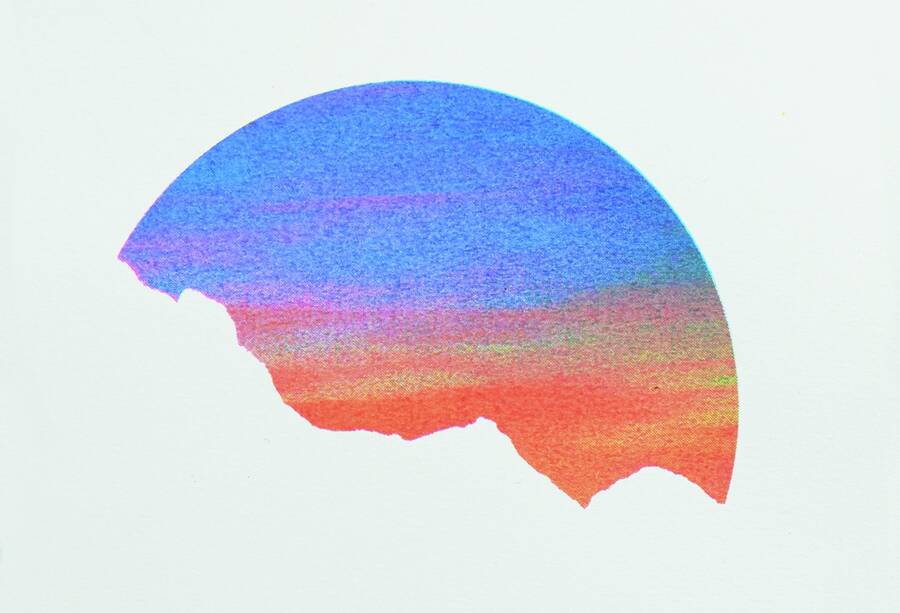 Our Fall issue cover image comes from artist Devra Freelander (1990-2019). Her work is introduced here by Claire Lachow, a fellow member of the feminist artist collective MATERIAL GIRLS, which Freelander founded in 2016.

DEVRA FREELANDER’S WORK is a love letter to a cold and remote object of affection: the earth, particularly at its most inhospitable—polar landscapes of ice and rock, and terminating vistas where jagged mountaintops meet a vast color-changing sky. In her ecstatic vision, these frozen places became charming and warm; indeed, their tenderness reminds us of the vulnerability of these landscapes to human touch. Like the 19th-century artists who responded to industrialization with sublime images of nature’s raw power (the blazing sunset in J.M.W. Turner’s The Slave Ship comes to mind), Devra reacted to the most consequential issues of the 21st century—technology, consumption, and climate change—by attending to nature, emotionality, and subjectivity. She also engaged with the visual legacy of 1970s minimalism, playfully subverting its austere machismo. In her work, there is no escape into the purely aesthetic experience sought by the romantics and minimalists; it emerges, rather, from a perspective fully mediated by digital technology, and staunchly, in her words, “ecofeminist & millennial.”

Devra often explained that she was drawn to the sublime quality of polar landscapes and geological formations in reaction to the “vapid plasticity” of her suburban New Jersey upbringing. While she was inspired by these far-flung landscapes, her visual references stemmed from her more immediate environment. Devra’s masterful applications of color in plastic resin invoke both the unnatural vibrancy of a backlit screen and the fluorescent sunsets that have ironically become more brilliant, and arguably more beautiful, with the increasing levels of pollution particulate in our skies. In these works, the complexities of sunsets are abstracted to a neat mathematical equation in the form of the gradient, referencing the web 1.0 graphics that characterized her childhood explorations of arctic terrains online.

In Devra’s work, circles and semicircles take on a metaphysical character, summoning the image of the sun while simultaneously describing the act of looking itself. Circles are a common motif that manifest in many forms: in luminous resin discs, shaped steel wire, still life photographs, and in silkscreen prints such as CMYK Solar Silhouette 01D, which is featured on the cover of Jewish Currents’s Fall 2019 issue. These forms circumscribe an area that is projected onto the world by the looker’s eye—a representation of solipsistic tunnel vision. Oftentimes the circles are bisected by the silhouette of a mountain range; the resulting circular forms appear broken—a visibly incomplete whole.

In 2018, Devra created a new body of work, Fluorescent Fragments, from the broken remnants of her first public sculpture: a 25-foot resin disc implanted on the Queens waterfront titled Fluorescent Sunrise. The fragments memorialize both the painstaking process of this massive undertaking, made in collaboration with other members of her artistic community, and its subsequent destruction at the end of the exhibition. In the time between its creation and destruction, she visited the Arctic, where she filmed a performance piece, far away, deep inside, in which she placed her exposed body against glaciers in an intimate embrace—both an act of love and an acceleration of the inevitable melting caused by global climate change. A conflict between individual intent and collective impact is unearthed in her work, as is a meditation on the closeness of love and loss. It’s this characteristically irresolvable tension that complicates the formal beauty of the work Devra was committed to bringing into the world: Can sublimity be captured, consumed, or possessed? What does it mean to love what you destroy, or to destroy what you love? What does it mean to love what you cannot hold, for fear that it might be lost?

Devra Freelander (1990-2019) made sculptures and videos exploring climate change and geology through an ecofeminist and millennial lens.