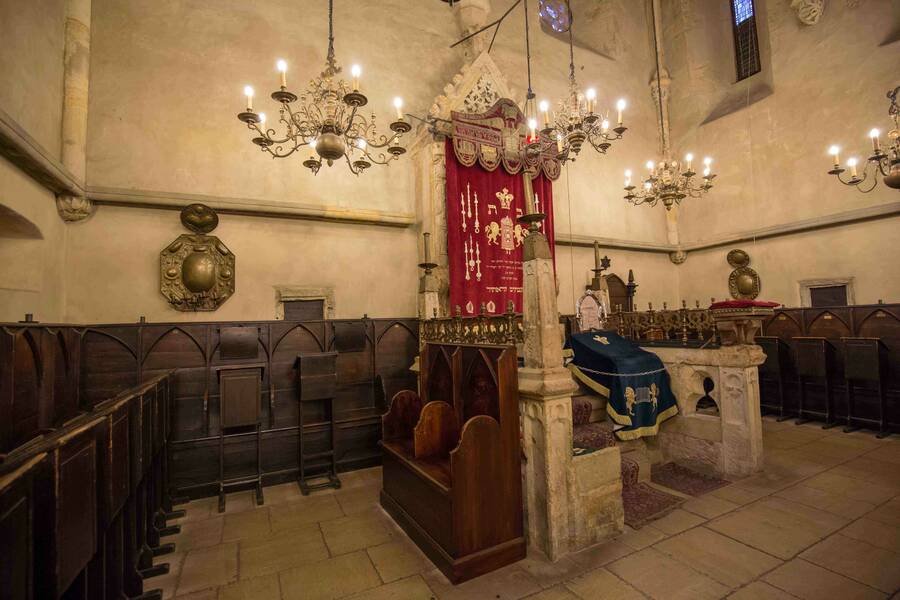 I don’t remember exactly how old I was when I learned about dybbukim—six? seven?—but I remember exactly where I was: in my grandparents’ musty basement, under my older cousin’s serious gaze. My cousin, 16 or so, informed me soberly that the dislocated souls of the dead can take residence in your body and make you do bad things. I pushed aside a stack of dusty Yiddish magazines so that I could nestle more comfortably against the wall and shrugged, unimpressed. Wasn’t it obvious that most adults we knew were at least occasionally overtaken by something that had to do more with the past than the present?

Reading Ruth Madievsky’s “Dybbuk,” I felt a kind of homecoming to that shared Jewish cultural territory: the sense that much has gone wrong before you, and that this wrongness continues to matter in ways that aren’t entirely clear. Madievsky’s poem begins with an unusual dybbuk, who inhabits not a person but a building: the synagogue. The structure that deliberately hosts the community is also the unwilling host to a demon; something is polluted at the source. From this uncanny beginning unfurls a series of minorly botched rites of passage and other fumbled thresholds, passed down the generations like an heirloom. For much of the poem, what transpires is not catastrophe—a statue with miscalculated proportions, a husband’s unseemly bragging—but the accrual of mishaps seems to touch catastrophe’s hem so that when catastrophe enters, it feels predestined. Yet, when changes to the physical world are the the only way to apprehend movement in the spirit world, what, really, is the difference between being cursed and believing oneself to be?

The synagogue has a dybbuk.
The equestrian monument to Red Army commander Kotovsky
in Kishinev is famous
for the horse’s giant balls.
My great-great-aunt’s husband was famous
for bragging about all the women he’d impregnated.
He was that desperate not to appear infertile,
even to his wife.
My father’s fortieth birthday party
was at the synagogue. After his party,
my father didn’t sleep for a year.
After my brother’s bar mitzvah at the synagogue,
bilateral pneumonia unspooled inside me
like cotton candy.
Imagine spending four years on a career-making sculpture,
and all anyone talks about is the horse’s junk.
Imagine staying with someone
because A fire poker for a husband is better than no husband,
as the Russian proverb goes. When I was nine,
I took gymnastics at the synagogue. Imagine watching
your classmates do flips on the trampoline
while you had a panic attack,
peed yourself in public again.
Imagine learning in the newspaper
that the director of the school attached to the synagogue
took bribes to forge SAT scores.
I’ve been in one major car accident—
a left turn on yellow in front of the synagogue.
They say a dislocated dead soul pumps out curses
like a t-shirt cannon.
I don’t know if I believe that.
I don’t know if I believe
suffering is a fishhook.
It’s true I prefer not having certain suspicions confirmed,
as when I waited almost twenty years from the first panic attack
to get tested for HIV. I had to become
an HIV pharmacist to convince myself
the virus wasn’t transmitted
the way I was assaulted.
I was that desperate to believe
what happened to me was unremarkable.