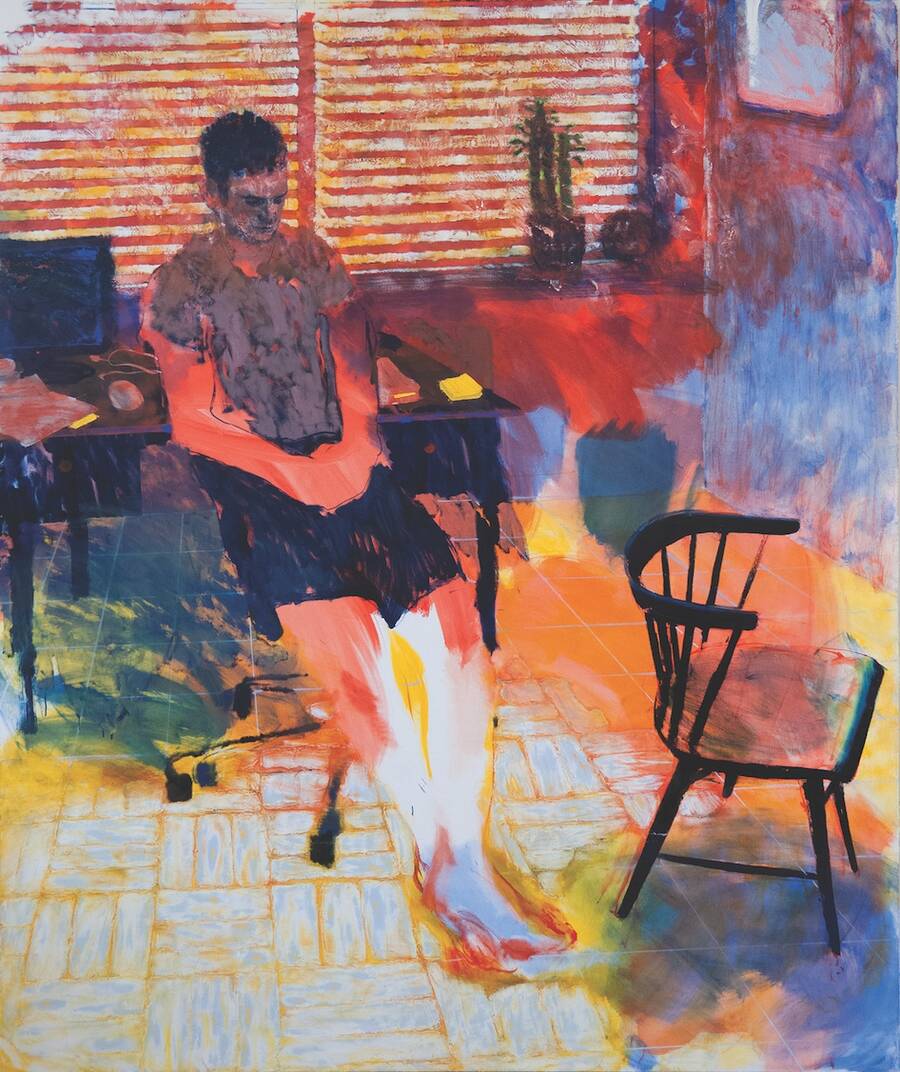 IN THE LOWER RIGHT HAND CORNER of Doron Langberg’s painting By the Window, a Windsor chair sits empty. It’s ghostly, barely there—parts of it so faint that it almost blends into the tile floor. Yet we do see the chair in the paint; we recognize its materiality; we can imagine the possibility of sitting on it if we were figures in this scene.

Elsewhere in the same painting—featured in “Likeness,” Langberg’s recent exhibition at Yossi Milo Gallery in New York City—splotches of color and quick brushstrokes make other objects less apparent, more hints of substance than concrete realities. Matter here is indeterminate, elusive, impressionistic—it phases in and out. Much of the rest of the painting is taken up by the figure of a man sitting alone in the room. His hands are clasped together on his lap, blurred into one another, a single solid form. It isn’t clear where his feet end and the floor begins. His eyes are aimed downward, deep in thought or dream. The interiors of his mind color the interiors of the room. We dwell in his intimate sensations as much as in this physical space by the window.

“The spaces should feel like emotional spaces,” Langberg tells me. “Obviously they exist as inhabitable spaces—I want the viewer to feel that it’s a real space that they could enter into—but also something that’s more of a continuation of the figure’s interior life.”

This imbrication of interior and exterior is apparent in much of Langberg’s work. The invisible screen separating us from the world is porous—much gets through. Like the spider who feels the reverberations of the tiniest of movements on the threads of his web, we are tethered to our surroundings, and they to us, in ways felt if not exactly known. Langberg’s work inherits this understanding of our permeability from Intimism, an oft-overlooked aesthetic movement from the late 19th and early 20th centuries.

Intimism grew out of Impressionism, in the work of some members of a French artist collective called Les Nabis, including Édouard Vuillard and Pierre Bonnard. The movement emerged from the Impressionists’ interest in subjectivity and their desire to catch fleeting moments, bathed in light and suffused with the slush of memory. But instead of the landscapes the Impressionists reproduced en plein air, the Intimists found cloistered corners to paint—often peopled with relatives, friends, and lovers, sitting on chairs, leaning against walls, lounging in beds. They set out to capture the numinous beauty that can erupt from the mundane. Color, line, and texture were no longer used merely to recreate the material world, but to embody the mood of a particular space in a specific moment—to seize the psyche of a domestic scene.

Over a century later, Langberg is making a name for himself as part of a loosely affiliated group of young LGBTQ painters articulating—to varying degrees and in a diverse range of styles—a New Queer Intimism. These painters—Louis Fratino, Salman Toor, Kyle Coniglio, and Anthony Cudahy could all fit under this banner—explore the intimate inner worlds of the queer lives they portray. Like the Intimists of the Belle Époque, they suggest revelations of the soul through the mysterious interplay between human figures and the spaces they inhabit.

From Bonnard, Langberg says that he learned to “create a certain kind of reality in a painting that feels parallel to our reality—certain light situations, late afternoon or chilly morning—but the colors themselves have nothing to do with the colors we would actually see in the real world.” In Vuillard’s work, Langberg admires how “each brushstroke constructs the image but also deteriorates it—keeping it from becoming fully coherent.” Much as Vuillard’s sister disappears into a pattern on a wall in his painting Interior, Mother and Sister of the Artist, the figures in Langberg’s paintings often merge with the decor. The man in Morning 1, for instance, blurs into his bed and blanket. In Mark and Aubrey, the lower half of one of the figures completely disappears under a table. In Daniel Reading, a woman’s legs merge into a mess of strokes that may be furniture, may be floor, may be raw feeling. As in the work of these Intimists, Langberg’s paintings offer a harmony between the animate and the inanimate, not only in the continuum between dwellers and their dwelling places, but also in the continuum between the materiality of the brushstrokes and that of the depicted world. The viewer isn’t always immediately confronted with the figure in Langberg’s paintings and must sometimes find it in the confusion of swirls and marks, amidst phantasmagoric color and light. Langberg says he hopes this “creates a different relationship between the viewer and the figure, perhaps a more empathic relationship, having encountered the color, the form, and the materiality first.”

The beauty of Intimism is that it offers a way to depict not only the reciprocal intimacy of figure and space, but also the reciprocal intimacy of painter and subject. As much as the paintings of Langberg and the other New Queer Intimists—as well as the original Intimists—offer a glimpse into the inner lives of the people they depict, they also offer a glimpse into the inner lives of those doing the depicting. These paintings are the confluence where the streams of multiple consciousnesses rendezvous.

The title of Langberg’s exhibition last year at 1969 Gallery—Nothing Personal—speaks to this idea. The title came from an essay by James Baldwin, whom Langberg cites as a strong influence for crafting characters. “There’s so much love and tenderness and empathy that he is communicating,” Langberg says. “The level of care that he puts in makes his characters real human beings but also makes him a real human being through their narrative. It’s an access point not only to the characters but to himself. It’s a model for how I want to paint.”

Indeed, looking at Langberg’s art, I am reminded of what André Gide felt of Vuillard: “I know few works where one is brought more directly in communion with the painter.” In a piece like Morning 1, Langberg paints in whispers, ushering us into his confidences. He explains that this crucial element of “imbuing subjects with psychological meaning” is something he gleaned not only from the Intimists, but also from Vincent Van Gogh, another of his artistic forefathers.

All the painters of the New Queer Intimism dissolve the borders between the figures and their surroundings, between the brushwork and the depicted world, between painter and subject, as a way of offering the viewer an intimacy with both the painter and the painted figures—even if their major influences are less explicitly Intimist than Langberg’s. Fratino, for example, probably owes more to Pablo Picasso and Max Beckmann than to Vuillard and Bonnard, but the Intimist emphasis on the rhythm generated between subjective consciousnesses and the worlds in which they exist is as central to his work as it is to Langberg’s. Toor, too, has his own touchstones, but the way he uses color to enliven the psychology of a scene borrows from Intimism (as in the green-tinted nightlife depicted in The Bar on East 13th, which echoes Vuillard’s own verdant tableau, The Flowered Dress).

“We each were doing our thing for years, and suddenly there’s a context and an opportunity to have a broader dialogue about queer intimacy,” Langberg says of the burgeoning scene. “To me it’s a huge privilege. I feel like having a more populated field allows each of us to formulate our own language.”

The work of these artists feels subversive not because it depicts what might have previously been called a “transgressive” sexuality, nor because it employs an aesthetic that earlier critics might have denigrated as “pornographic.” Yes, the paintings do sometimes feature erect penises and dilated anuses. (“I’m very committed to the idea that every one of my shows will have a rimming painting,” Langberg tells me, chuckling.) But the truly radical aspect of these artists’ paintings is their tender depiction of quotidian queer life—until recently, largely verboten as a “worthy” artistic subject or a site for the exploration of deep, existential truths. Whereas heterosexuality has long been the canvas on which artists have explored, complicated, and symbolized a whole host of thematic preoccupations outside the immediate domain of the bedroom, queer sexuality in art has long been saddled to its queerness, its sexuality, and its corporeality.

Langberg and the other New Queer Intimists are breaking down the traditional barriers that denied queer existence a chance to embody the universal. They expose the absurdity of such barriers by exploring the whole spectrum of life, letting LGBTQ representations conjure up broad emotional states that all people can see themselves in. “I want even the most explicit of my paintings to feel very everyday, because that’s the role they have in my life,” Langberg explains. “I see what I’m doing as an act of humanizing queerness—not making it sensational or ‘other,’ but making it casual, and making queerness a nexus for other meanings as well.”

Though Langberg—who grew up in Israel, the son of a Holocaust survivor—admits his Jewishness might be less explicit in his art than his queerness, he sees this desire to “assert the humanity of the paintings’ subjects” as part of a broader Jewish project. This humanist aesthetic is linked to a certain quality of Jewish memory, what a mentor once described to him as “the knowledge that everything can be taken away from you at any second.” In the wake of such precarity, Langberg’s paintings conjure up the mutability of memory—its soft focus and refulgent colors, its uncanny subjectivity, its already-lost-ness. This ephemerality, though melancholic, is also a site of empathy, joy, defiance.

Tyler Malone is a writer based in Southern California. His writing has appeared in the Los Angeles Times, Lapham’s Quarterly, Artforum, and elsewhere.