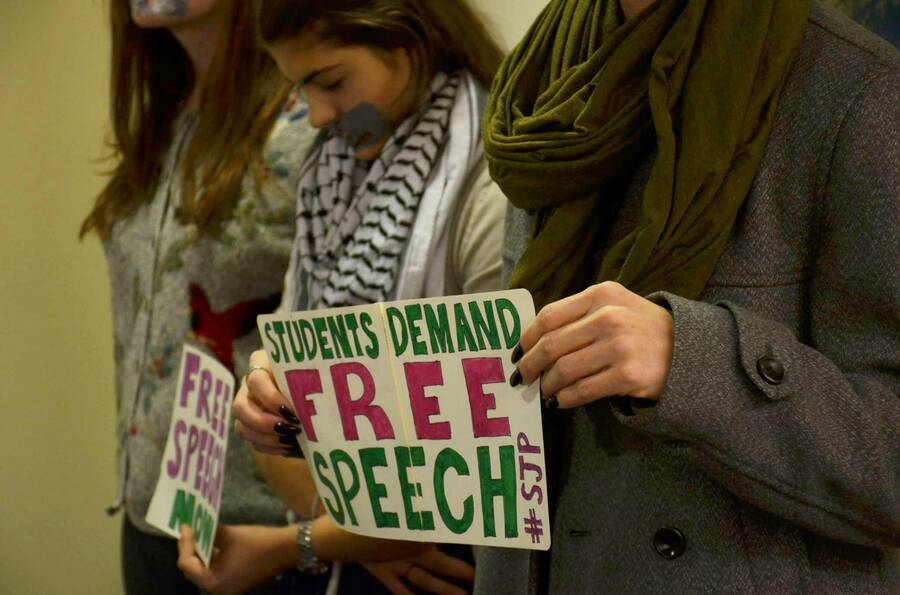 THE JEWISH FEDERATIONS OF NORTH AMERICA (JFNA) is lobbying the incoming Biden administration to “broadly apply” the controversial International Holocaust Remembrance Alliance (IHRA) “working definition” of antisemitism across the federal government, according to the group’s memo listing its recommendations for Biden.

Last December, Donald Trump signed an executive order mandating that federal agencies use the IHRA definition of antisemitism in assessing civil rights complaints about programs receiving federal government aid, with the chief aim of having the definition used to consider discrimination complaints on college campuses. Many Israel-advocacy groups applauded the order as a tool for fighting antisemitism on college campuses, but critics (including the definition’s original author) raised concerns that the definition—and, in particular, the examples of antisemitism that categorize certain criticisms of Israel as antisemitism—could be used to suppress pro-Palestinian speech. Now, the JFNA wants the definition, which the US State Department also uses, to continue to be applied across the federal government. The JFNA is also asking the Biden administration to support legislation “that will formally adopt” the definition “as official policy of the United States.”

“JFNA has actively advocated for the U.S. adoption of the International Holocaust Remembrance Alliance (IHRA) ‘working definition’ of antisemitism since it was crafted in 2016,” said Stephanie Hausner, interim director of JFNA’s Israel Action Network, in a statement to Jewish Currents. “We would like to see it continue to be applied within the federal government so that patterns of harassment or a hostile environment facing Jews can be assessed in a review of potential discrimination.”

When asked about the free speech concerns associated with the definition, Hausner said, “We understand that there is criticism out there, but we agree with the US State Department, the European Union, 28 countries and the more than 200 organizations, universities, states, and municipalities who all agree it is wrong to, among other things, accuse Jews of being more loyal to Israel or Jewish peoplehood than to their own nations or communities simply because of their faith or ethnicity.”

The IHRA working definition was originally drafted in 2005 by Kenneth Stern, currently director of the Bard Center for the Study of Hate, in his capacity as antisemitism expert for the American Jewish Committee. The definition describes antisemitism as “a certain perception of Jews, which may be expressed as hatred toward Jews,” and then goes on to list several examples of how antisemitism may manifest. The most controversial examples include “Denying the Jewish people their right to self-determination, e.g., by claiming that the existence of a State of Israel is a racist endeavor” and “Applying double standards by requiring of [Israel] a behavior not expected or demanded of any other democratic nation.” (The definition does, however, note that “criticism of Israel similar to that leveled against any other country cannot be regarded as antisemitic.”)

The IHRA, an intergovernmental organization that collaborates on Holocaust remembrance, adopted a version of Stern’s text in 2016. Stern said in an interview that when he drafted the definition in response to concerns about worsening antisemitism in Europe, he intended for it to be used as a uniform standard to catalogue antisemitic incidents and, potentially, as a tool for heads-of-state to evaluate whether foreign leaders were making antisemitic statements. But, Stern said, he never intended for it to be used as a governmental hate speech code because he believes such usage raises serious concerns about free speech.

In November, 122 Palestinian and Arab academics and journalists published a letter in The Guardian expressing concerns that the IHRA definition can be used to deligitimize Palestinian activism. “To level the charge of antisemitism against anyone who regards the existing state of Israel as racist, notwithstanding the actual institutional and constitutional discrimination upon which it is based, amounts to granting Israel absolute impunity,” they wrote. “Israel can thus deport its Palestinian citizens, or revoke their citizenship or deny them the right to vote, and still be immune from the accusation of racism.”

Indeed, Israel-advocacy groups have spent the past several years campaigning to have state governments, universities, and tech companies adopt the IHRA definition precisely to regulate speech and to neutralize Boycott, Divestment, and Sanctions (BDS) campaigns. In Arizona and Iowa, legislators have introduced bills that would codify the IHRA definition as hate speech, meaning that the type of criticism of Israel highlighted in the definition’s examples could be considered an “aggravating factor” in hate speech prosecutions. South Carolina and Florida have passed bills requiring state universities to use the IHRA definition to regulate campus discrimination complaints. And groups associated with the right-wing philanthropist Adam Milstein are lobbying Facebook to adopt the full IHRA definition, including the examples involving Israel, to define hate speech on the platform.

As an example of what the JFNA sees as the successful use of the definition, Stephanie Hausner cited a case at the University of Illinois at Urbana-Champaign (UIUC), in which students filed a federal Title VI civil rights complaint alleging antisemitic discrimination. “Thanks to the 2019 Executive Order, we saw the critical role that this definition played in helping to stem years of harassment intimidating Jewish students,” she said. In their complaint, the UIUC students described various grievances ranging from overt antisemitic vandalism—including swastikas drawn on campus property—to Israel-related political acts, like a BDS resolution passed by the student government. In November, the Department of Education announced it would investigate the case, and in response, UIUC declared its intention to create a special advisory council to address antisemitism. Hausner’s statement described this as a victory for the IHRA definition. The university did not specifically mention the IHRA definition in its statement about the advisory council, though it did discuss anti-Zionism in addition to antisemitism, noting that “for many Jewish students, Zionism is an integral part of their identity and their ethnic and ancestral heritage.”

The UIUC incident fits within a larger nationwide pattern, in which Israel-advocacy groups file complaints of antisemitism in response to anti-Zionist activism on college campuses, creating public controversy and winning concessions from universities, even before the cases have been legally adjudicated. As Natasha Roth-Rowland reported for Jewish Currents this spring, Trump’s executive order on antisemitism has helped embolden such strategies, allowing Israel-advocacy groups to push universities to act by threatening Title VI litigation.

Hausner did not elaborate on how, specifically, the JFNA would want to see the IHRA definition applied in the federal government in addition to the existing executive order. “Maintaining the use of the definition where it is currently used such as the Department of Education is an important first step,” she said.

Stern speculated that broader use of the definition could lead to the federal government curtailing its support of human rights groups or even cultural festivals based on their stance on Israel/Palestine. He said it is possible that use of the definition could lead to litigation on constitutional grounds for impeding free speech or assembly. Last year, after Trump signed the executive order, the ACLU wrote in a statement, “Speech criticizing the Israeli government, or any government, is political speech protected under the First Amendment, and cannot be suppressed. Agencies are permitted to consider such speech as evidence of discriminatory intent—but not to prohibit it. . . If the administration attempts to undermine [freedom of speech] using this order, we will see it in court.”

A representative for the Biden transition team did not respond to requests for comment on the JFNA’s recommendations.