Democrats Fail the Left, Once Again

Trump’s racist attacks on Ilhan Omar have been enabled by her own party. 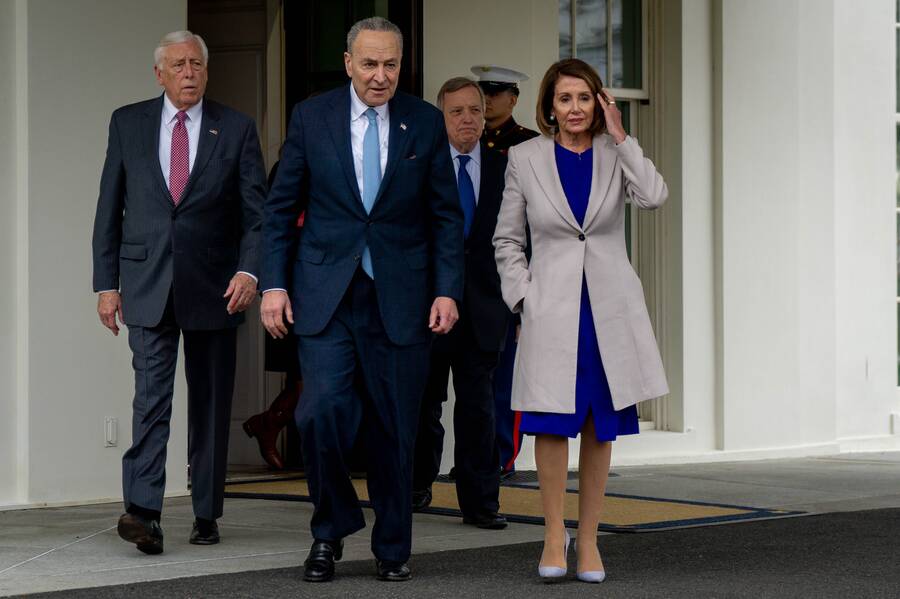 TRUMP SUPPORTERS starting a racist chant is nothing new, and it should be taken for granted that what follows these chants is violence. At various 2016 rallies, Trump rally attendees assaulted primarily black anti-Trump protesters in the crowd, and as the New York Times described the phenomenon in a big-picture August 2016 article on Trump rallies, “these displays have become inextricably bound with the Trump show itself.” No matter how Trump advisers dissemble about it to the press, racist sentiment and right-wing mob violence have long been essential to Trump’s promise to “Make America Great Again.”

What has changed since 2016, however, is that Donald Trump is now the president, and his present enemies include newly elected members of Congress. At a Wednesday evening rally in Greenville, North Carolina, Trump reiterated what he said earlier in the week in a Twitter thread, suggesting that if Reps. Alexandria Ocasio-Cortez, Ayanna Pressley, Rashida Tlaib, and Ilhan Omar didn’t like America, they could “leave.” Although Kellyanne Conway and others insisted that Trump didn’t really mean what he had tweeted, Trump’s own supporters got the message loud and clear; in response to Trump’s remarks about Omar, who came to the US as a teenage refugee from Somalia, in particular, they replied, “SEND HER BACK!”

This was bound to happen. Faced with a new group of congresswomen to the left of the Democratic mainstream—one of whom is Hispanic, two of whom are Muslim, and two of whom are black—Trump was going to respond to them with racism. One can theorize endlessly about some supposed strategy behind Trump’s comments, as many in the media have, contorting themselves to avoid simple truths about what right-wing populists do in power, and why “sensible” conservatives do nothing to stop them. But Trump got himself elected by consolidating the Republican base around nativist anti-establishment sentiment, and then eking out an Electoral College win. There is no good reason why he would try any other sort of approach—even if most Americans think what he’s said on Twitter is repugnant—given that he won the presidency on these principles the last time around.

What deserves far more scrutiny is how Omar’s name ended up in Trump’s mouth in the first place. The culprits, as usual, are the centrist wing and leadership of the Democratic Party. In the days leading up to Trump’s weekend tirade against the four left-wing congresswomen, all four had spoken out against the $4.5 billion so-called border “aid” package passed by the Democratic-controlled House at the end of June. The four did not vote for the measure, which passed through the Republican-led Senate, after rightfully identifying it as an unacceptable half-measure that House Democrats did not negotiate on; the passed bill is not a guarantee of humanitarian aid (it is largely composed of funding for ICE), and it includes virtually no measures of accountability for the funding.

In response to the vociferousness of her congressional critics on the left, Pelosi gave an interview to New York Times columnist Maureen Dowd the following week in which she knocked them for not having “any following,” insisting that “we have to have a solution, not just a Twitter fight.” What happened next was precisely what Pelosi claimed not to want, as the official House Democrats Twitter account directly attacked Ocasio-Cortez’s chief of staff Saikat Chakrabati, accusing him of “explicitly singling out a Native American woman of color” (newly elected centrist Democrat Sharice Davids) in a mildly critical tweet sent weeks earlier. When asked about the tweet, House Democratic Caucus Chair Rep. Hakeem Jeffries, whose staff controls the account, simply said it “speaks for itself.”

After weeks of this Democratic backbiting, Trump himself once again decided that going after Pressley, Ocasio-Cortez, Tlaib, and Omar might be a useful line of attack. On Sunday morning, Trump sent off a series of tweets attacking the four congresswomen, urging them to “go back and help fix the totally broken and crime infested places from which they came.” Although Pelosi sent a Monday morning letter to House Democrats deriding Trump’s “xenophobic” tweets, the fight with “the Squad” (as the media insist on calling them) continued right up until Trump’s rally in North Carolina this week.

On Monday, Axios’s Mike Allen published an anonymously sourced poll that he claimed was being circulated by “top Democrats,” which purportedly showed that Ocasio-Cortez and Omar were hurting Democrats’ 2020 chances in swing states. A Twitter thread from CNN anchor Jake Tapper followed on Wednesday, which reported that four anonymous House Democrats were upset about having to defend Ocasio-Cortez, Omar, Pressley, and Tlaib, with one telling Tapper, "I can't tell you the number of Members who are angry and annoyed about them criticizing us.” Just a few hours later, Trump took the stage in Greenville.

The Democratic leadership tolerates and encourages this mess because for them, every election cycle must be treated as if we were still living in 1992, and Democratic electoral chances depended on a lurch to the center. Pelosi’s cold feet about letting the party drift leftward to where its base is, and her willingness to kowtow to the very same moderates who attempted to dethrone her earlier this term, are rooted in the fear that a meaningfully left-wing Democratic Party is one that can never seize national power. Thomas Friedman, speaking for this crowd of Democrats in his Times column this week, put it as succinctly as Thomas Friedman can manage: “Just nominate a decent, sane person, one committed to reunifying the country and creating more good jobs, a person who can gain the support of the independents, moderate Republicans and suburban women who abandoned Donald Trump in the midterms and thus swung the House of Representatives to the Democrats and could do the same for the presidency.”

Unfortunately for Friedman, Pelosi, and others praying for “sanity” (read: centrism) to reignite the Democratic Party, you can’t wind time backward. Progressive 2020 contenders like Bernie Sanders and Elizabeth Warren, alongside the Democratic Party’s ascendant left wing, cannot be cast out as the party’s ersatz cousins. Their agenda is broadly popular, and primarying them out of power is a pipe dream, especially considering the energized, youthful ground game that inspired their victories in the first place. But rather than acceding to the will of its base or at least bargaining over how much good the Democratic Party can aspire to do, its leadership prefers to offer up its left wing to Trump.

By this point, hanging the party’s left wing out to dry has become the standard operating procedure of the Demcoratic leadership and its allies. Omar was left twisting in the wind earlier this year after facing spurious charges of antisemitism, a display of Democratic cowardice co-signed by Chelsea Clinton, Chuck Schumer, and most every other Democrat with a congressional leadership position. These are accusations that Donald Trump—and Lindsey Graham, and Marco Rubio, and so on—glibly and happily repeats.

After the Tree of Life mass shooting in Pittsburgh last year, I wrote in Jewish Currents that the only way forward was a “commitment to solidarity” as exemplified by a joint Jewish-Muslim vigil held in New York’s Union Square in the wake of the attack. Though at the time I was primarily addressing the grassroots, the lesson holds doubly true on Capitol Hill—the only adequate response to chants of “send her back!” is for Democratic moderates to defend their party’s left flank with the same level of support that progressives show for the leadership (despite Pelosi’s whining, Pressley, Ocasio-Cortez, Tlaib, and Omar have only broken with the speaker on two major votes). In a situation where showing solidarity in the face of relentless right-wing pressure is the straightforward and correct choice, Democratic leaders time and again fail their colleagues on the left. There is little reason to expect they’ll start acting any differently.