After a Jewish man was attacked for wearing an IDF hoodie, demonstrators responded with calls for more cops. 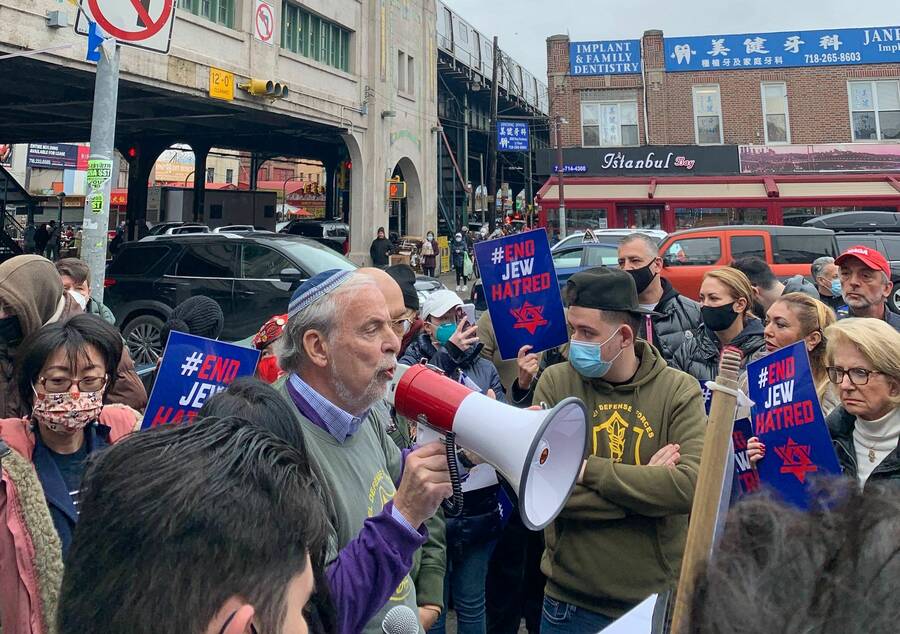 Former New York State Assemblyman Dov Hikind, head of the group Americans Against Antisemitism, speaks at a rally responding to an incident in which a man was attacked for wearing an IDF hoodie, Brooklyn, January 2nd, 2022.
Alex Kane
Tweet Copy Link Email Print

ON SUNDAY AFTERNOON, about 100 people gathered in Brooklyn’s Bensonhurst neighborhood to protest antisemitism. Organized by newly-elected Councilwoman Inna Vernikov, the first Republican to represent the 48th district—or any Brooklyn district—since 2003, the rally was called as a response to a December 26th incident in nearby Bay Ridge, in which two people outside a Foot Locker allegedly attacked 21-year-old Blake Zavadsky for wearing an IDF hoodie. Many rally attendees donned similar sweatshirts, to show solidarity with Zavadsky. A small group of counter-protesters, most them of them members of the anti-Zionist Haredi group Neturei Karta, showed up to denounce the rally, though the Palestinian group Al-Awda counseled their supporters not to counter-protest or respond because any reaction “will be taken out of context and used to hurt our members.”

According to Zavadsky, the attackers called him and his friend “dirty Jews,” demanded he take his sweatshirt off, and asked what they were doing in Bay Ridge, a neighborhood home to many Arab immigrants and in particular Palestinians. Then the attackers punched him in the face and threw iced coffee on him, said Zavadsky, whose black eye was still visible at the rally. Speakers at the rally framed the alleged attack on Zavadsky as just the latest in a spate of anti-Jewish attacks in the city in the past few years. But in this incident, Zavadsky seems to have been attacked because his clothing identified him with the state of Israel, unlike recent attacks throughout the tri-state area that targeted Hasidic Jews because they are recognizable as Jewish.

While Vernikov was the first politician to comment on the incident (Zavadsky spoke to Vernikov before it was publicized) it quickly drew attention from across the political spectrum. New York Gov. Kathy Hochul, a Democrat, condemned the attack as “abhorrent and unacceptable.” The Anti-Defamation League offered a $5,000 reward for help in locating the alleged attackers. As of this writing, nobody has been arrested in connection with the incident.

Both liberal and conservative Jewish communal leaders have increased their focus on anti-Jewish bias as incidents of antisemitism increased over the past five years. But even when the right and left do manage to unite during one rally, political divisions nevertheless come to the fore. As Joshua Leifer noted in his dispatch for Jewish Currents from the January 5th, 2020 “No Hate. No Fear” march against antisemitism, the event attracted both “anti-Trump liberals sporting signs calling for impeachment along with MAGA hat-clad Trump supporters.”

By contrast, the tenor of Sunday’s rally was distinctly right-wing. One attendee wore a MAGA hat; another carried a small Trump flag. While Vernikov organized the rally, its leader was Dov Hikind, the former assemblyman who now heads a group called Americans Against Antisemitism. Hikind, a former member of the extremist Jewish Defense League, was first elected in 1983 to the New York State Assembly as a Democrat, but he endorsed the last four GOP presidential nominees. He’s repeatedly called for security personnel to be allowed to racially profile people from the Middle East. “Ladies and gentlemen, Jewish blood is not cheap anymore,” Hikind told the crowd at the rally. “You are going to beat up a Jew, you are going to pay a price.”

The solutions that Hikind and Vernikov pushed to clamp down on antisemitism centered on expanding incarceration. After complaining that the alleged perpetrators of antisemitic attacks are often let out of jail soon after being booked because of New York’s new bail reform law, Hikind led the crowd in chants of “keep them in jail.” The claim that bail reform allows those accused of anti-Jewish hate crimes to leave jail soon after being arrested is false. Writing for The New York Jewish Week in January 2020, David Bernstein, who heads the Jewish Council on Public Affairs, and Zachary Katznelson, policy director for the Independent Commission on New York City Criminal Justice and Incarceration Reform, noted that “of the people charged with violence against Jews in New York City in recent weeks, not a single one is free without restraint. Instead, judges have assigned these people money bail, jailed them without any bail at all, locked them in mental health wards, or placed them under community supervision.” Jewish leaders’ rhetoric against bail reform contributed to a larger backlash against criminal justice reform in New York, leading to the partial rollback of a 2019 law meant to lessen the state’s reliance on bail, which often keeps poor people in prison because they lack the ability to make bail payments.

As the rally petered out, I asked Councilwoman Vernikov what policy responses she supported to reduce antisemitic attacks. “We have to refund the police, because if we don’t have the police, we don’t have safety on the streets,” she told me. (The NYPD has not been defunded; last year’s budget increased police funding by $200 million, and the promised caps on overtime for police that former Mayor Bill de Blasio promised in 2020 didn’t fully materialize.) “Number two, we have to make sure that criminals, such as the criminal in this incident, get caught, get arrested and stay in jail.” It was a perfectly on-message response to my question, though exactly how those policies would solve the problem of antisemitic attacks is unclear. The NYPD is the largest police force in the country, yet antisemitic attacks increased by 50% over the last year, according to police statistics. If the solution to antisemitism were as simple as locking people up and increasing the police presence, New York, and the United States, would have solved the problem a long time ago.