New York’s march against antisemitism, meant as a show of unity, instead highlighted the deep fissures between the different American Jewish communities. 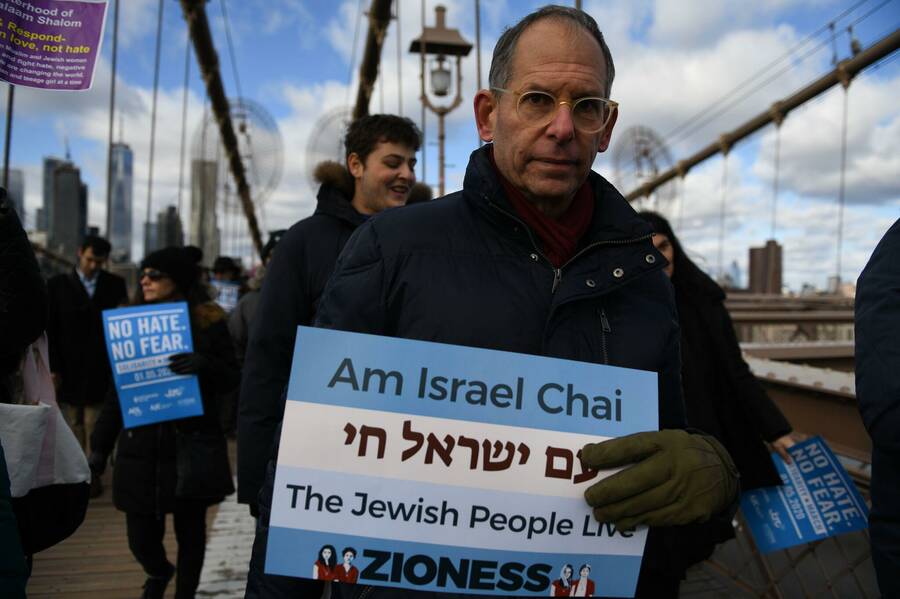 SUNDAY’S “NO HATE. NO FEAR.” SOLIDARITY MARCH, planned by a coalition of Jewish establishment organizations in response to recent antisemitic attacks on Orthodox Jews in Brooklyn, Jersey City, and Monsey, New York, began in Lower Manhattan and ended in Brooklyn’s Cadman Plaza. Tens of thousands of people braved the cold to traverse the Brooklyn Bridge and then gathered to hear speeches by the leaders of various Jewish groups, interfaith leaders, and community activists, interspersed with musical performances.

Meant as a show of Jewish unity, the event inadvertently highlighted the deep ideological and religious fissures between the different American Jewish communities, brought together less by shared values than by the shared experience of antisemitism—albeit without any consensus on where it comes from or how to fight it. It was, as New York City Councilman Brad Lander, a progressive Jew representing a swath of brownstone Brooklyn, told me, “a unity rally for people who disagree on the things that are most important to us.”

The attendees included a range of synagogue groups from Reform to Modern Orthodox; anti-Trump liberals sporting signs calling for impeachment along with MAGA hat-clad Trump supporters; members of the left-wing Jewish group Jews for Racial and Economic Justice as well as followers of the right-wing Jewish terrorist Meir Kahane.

The divisions were felt not only in the presence of the different groups, but also in the conspicuous absence of members of the Hasidic communities most affected by the recent violence. The night before the march, Jewish Insider reporter Jacob Kornbluh tweeted: “Lots of chatter in the Orthodox and Hasidic community whether to attend tomorrow’s solidarity march. They claim there was was [sic] no outreach and no organized effort to get members of the community — who are the victims of most antisemitic attacks — to attend or speak at rally.” Several groups that had been approached, including the Orthodox Union and Agudath Israel, declined to join the event, Kornbluh later reported.

Aron Wieder, a prominent Hasidic county legislator who represents a heavily Orthodox district bordering Monsey, announced that he could not “join a solidarity march while Nicholas Moster, who has been inciting against frum Jews in the state of NY is a co-sponsor of this event.” (Moster, whose first name is actually Naftuli, is the executive director of YAFFED, a group that advocates for improving secular education in Orthodox and Hasidic yeshivas, and which was listed as a participating organization on the march’s website.)

Left-wing Jewish activists also expressed frustration with how the march was planned. Some felt that the lack of clear guidelines or principles for groups identifying as co-sponors of the march enabled far-right actors to join a march ostensibly organized to oppose hate, thus sending the message that such views were not beyond the pale. Examples of far-right groups and leaders who promoted and joined the event included the Zionist Organization of America, whose president, Mort Klein, has a long history of racist remarks, and Dov Hikind, the former New York State Assemblyman and member of the Jewish Defense League, designated a right-wing terrorist group by the FBI.

On the stage in Cadman Plaza, however, there was little reckoning with the divergent views among different Jewish communities. Instead, the speakers mainly offered strident pledges to fight antisemitism, boilerplate pro-Israel talking points, and bromides about the importance of Jewish pride. “We must commit to living more Jewish lives, to filling our shuls, to filling our community centers,” said UJA-Federation CEO Eric Goldstein, who opened the proceedings, in characteristic remarks.

Many of the speakers also devoted parts of their speeches to instances of antisemitism unrelated to the attacks in the communities in support of whom the rally was ostensibly called. “As someone who worked in the Obama White House, I can tell you that, yes, we have a problem with antisemitism from some elements of the left,” said Anti-Defamation League CEO Jonathan Greenblatt, adding, “The casual demonization of the Jewish state leads to the demonization of the Jewish people.” Greenblatt reiterated his organization’s conflation of anti-Zionism and antisemitism—going as far as saying that “those who deny that anti-Zionism is antisemitism are contributing to the problem”—and asserted that refusing to call out antisemitism “coming from some minority communities” was, borrowing a phrase from George W. Bush, “the bigotry of low expectations.”

“Antisemitism is not a Jewish problem for Jews to solve,” said American Jewish Committee CEO David Harris, who spoke after Greenblatt. “Antisemitism is a non-Jewish problem for non-Jews to solve.” After calling for harsher prosecution of hate crimes, Harris condemned the “ten million British voters who cast their ballots last month for a party infested with antisemitism and anti-Zionism” and denounced “those high schools and colleges, right here in New York, that have allowed antisemitism, however disguised, to infest the classroom and the quad. ”

A notable exception to this combative tenor was the speech by Ma Nishtana, a black Jewish writer and rabbi, who challenged the attendees to extend their solidarity not simply to other Jews but to “the non-Jewish communities with whom we share our neighborhoods, our streets, our subways.” His was a rare voice willing to tell the crowd that the work of fighting hate would require “difficult conversations” and to warn against letting those conversations “become apologetics for terror or devolve into racist tirades.”

Many of these speakers highlighted the damaging effects of social media—political polarization, disinformation, and the proliferation of hate speech. Nearly all of the Jewish speakers also stressed the need to combat anti-Israel activism on campus, though perhaps none more vehemently than Weiss. In her forceful speech, structured as a long list of reasons why Weiss is proud to be Jewish, one in particular stood out: “I am a Jew because of students across this country who refuse to be smeared and denigrated because of who they are, who are standing up against humiliation, pressure, and abuse to affirm the justness of Zionism.”

If the rally had been intended as a show of solidarity with the Orthodox and Hasidic communities bearing the brunt of the recent antisemitic attacks, these communities’ actual views and concerns were hardly foregrounded. In practice, it seemed the rally was primarily intended to promote other agendas: perhaps to put the spotlight back on the establishment institutions; or perhaps to raise funds, to stoke fears about the political climate for Jewish students on college campuses, or to attack the left, even though none of the recent antisemitic attacks have had any clear relationship to left-wing politics.

Even as many of the speakers insisted on American Jews’ vulnerability, weakness, and isolation, the rally exemplified these organizations’ political strength—an irony that seemed to be lost on many of those who spoke. Numerous elected officials joined the march, including New York’s governor, both its US senators, and the mayor. Both Governor Andrew Cuomo and Mayor Bill de Blasio have announced swift measures—mainly increases in police deployments to neighborhoods with large Orthodox communities—to counter the attacks.

The description of the event as a “solidarity march” notwithstanding, any sense of real solidarity was lost in the shouts of “Am Yisrael Chai” (“The people of Israel live,” which has become a Zionist rallying cry), the declarations of Jewish pride, and the calls to defend Israel on college campuses. This all raised the question: solidarity with whom? Not, it seemed, between non-Orthodox and Orthodox Jews. Despite UJA CEO Goldstein’s remarks that the march was meant as a show of concern for the Orthodox and Hasidic communities, this was clearly not the right format; there were very few visible members of Haredi or Hasidic communities in attendance, reflecting these communities’ disinclination to participate in political rallies, as well as the reportedly insufficient outreach to them. And not between Jews and non-Jews, who, with the exception of a few non-Jewish speakers, mainly figured as antagonists in the various speeches. Too often, the rally showcased how fear and victimhood can lead to a narrowing of moral vision, to suspicion of the other, and to the dismissal of real solidarity as naive.

In another, better world, this march might have grappled honestly with the complexities of Jewish unity instead of using the suffering of New York’s Haredi and Hasidic communities as a pretext for pushing other agendas. It could have stressed the obligations that Jews have not only to our fellow Jews but to our neighbors—to the communities, Jewish and non-Jewish, to which we do not belong, as well as those to which we do. It could have more prominently featured the language of compassion and understanding instead of calls for militancy and the glorification of state violence. It could have asked something of its participants instead of telling them to continue doing what they were already doing, only more fervently.