Universities Must Reckon With Their Role in the Occupation

A University of Michigan instructor explains why she declined to recommend a student for a study abroad program in Israel. 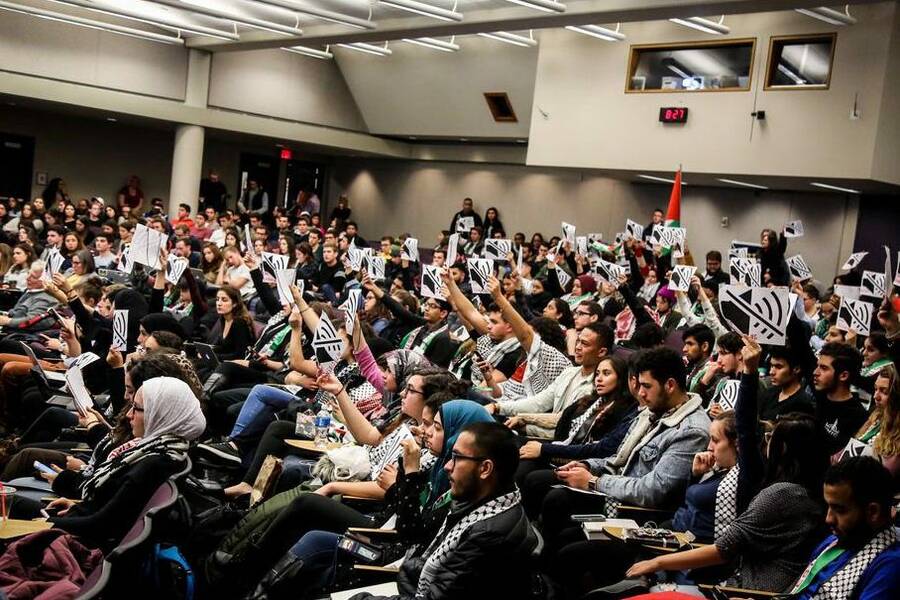 ON THURSDAY, OCTOBER 4TH, Israeli soldiers blocked the perimeter of Al-Quds University, barring Palestinian students from attending their classes. From a vastly different place in the world, I was just getting home from my evening commute when I checked my email on my phone. In my inbox was a message from Rosario Ceballo, Associate Dean of Social Sciences at the University of Michigan, calling me into a meeting with her and the chair of my department.

This email was intimidating but not entirely unexpected. The day before I had replied to a former student who had asked for a letter of recommendation to study abroad at a university in Israel. I explained to them that my participation in a boycott of Israel would bar me from writing on their behalf for this particular program.

This past March, the US Campaign for the Academic and Cultural Boycott of Israel (USACBI) publicized the importance of applying the boycott specifically to study abroad programs, arguing that “to enroll, or participate in any way, in a Study Abroad program at an Israeli institution means ignoring if not perpetuating the ongoing violation of the academic—and, indeed, human—freedoms of Palestinians.” Additionally, undergraduate students in UM’s chapter of Students for Justice in Palestine, called Students Allied for Freedom and Equality (SAFE), has been asking the administration to protect them from the discrimination they face as a result of standing up for Palestinians, with no response. They wrote in a recent statement: “For years, students at the University of Michigan have been consistently targeted on international political blacklists . . . This blacklist is just one of several tangible barriers for students that will prevent them from engaging in not just study abroad programs, but academic programs, jobs, and admittance into Palestine/Israel.” The disproportionate attention paid to securing some students’ opportunities and not others’ illuminates the importance of the boycott not only for Palestinians living in Palestine, but also for their American student advocates, some of whom are Palestinian themselves.

The exchange with my student occurred shortly after a similar episode at UM which drew national attention. University of Michigan American Culture professor John Cheney-Lippold told a student who wanted to study abroad in Israel that he could not write on their behalf because he is a participant in the BDS movement. This choice is unsurprising coming from an American Culture professor, since the American Studies Association collectively endorsed the boycott of Israel in 2013. Although I didn’t know it when I declined my student’s request, Dr. Cheney-Lippold faced serious consequences from the university for his choice; he has since been punished with a one-year salary freeze and barred from going on sabbatical for the next few years. He has also been threatened with termination if his support for BDS leads to “interfering with a student’s academic aspirations” in the future.

Before deciding not to write the recommendation, I weighed my options with careful consideration, as I have been doing with respect to my involvement in BDS for many years now. Was I justified in invoking the boycott in this particular scenario? How would I explain myself? As a student of politics, I knew well that public universities hold a great deal of political power and that each of us are agents of that power, albeit to different extents. As a participant in BDS, I knew that my actions would necessarily entail an exercise of power that would have implications not only for UM students beyond the particular student in question, but also for Palestinians.

As of now, it remains to be seen how or if I will be punished with respect to my job as a graduate student instructor or my status as a graduate student at UM, upon both of which I am financially dependent. However, the University’s president and provost issued a statement on Tuesday, October 9th condemning both my and Professor Cheney-Lippold’s actions as unsupportive of our students, contrary to the university’s mission, and unfairly lacking separation between our personal beliefs and professional responsibilities. They promised that I, like Dr. Cheney-Lippold, will face “serious consequences.”

These events have brought BDS activism into ongoing discussions in universities about what is owed to students. Some have emphasized that instructors have a fiduciary responsibility to students such that we must do our best to help them fulfill their academic and career goals. But how are we supposed to balance the corporatization of public universities, which turns students into consumers and teachers into goods and services providers, with the very real political power universities wield? Are all of us—faculty, student instructors, administrators, and students —supposed to passively embrace the imperatives of the corporate model? And, at any rate, does the corporate model somehow override the constitutionally secured right to boycott? Finally and most importantly: what is the responsibility of public universities to step in against injustices against Palestinians? It is my belief that my university and others need to be held accountable for answering this question, without hiding behind corporate imperatives or misplaced accusations of religious discrimination.

In addition to promising to punish me, in their letter to the UM community the president and the provost allude to religious discrimination. Although the word antisemitism only appears in the letter’s title and first sentence, the association they made between participating in BDS and antisemitism was unmistakable. The letter claims that “the incidents have caused hurt and made some members of our community feel that their religious identity and academic aspirations are not valued.” As a Jewish woman, I am deeply troubled by the implied connection that President Schlissel and Provost Philbert make between criticism of Israel and antisemitism. Moreover, neither one spoke with me personally before expressing their certainty around this very complex political and psychic terrain. Had they done so, they would know that I am very concerned about antisemitism in its abundant and distressing manifestations, both historically and contemporarily. I would have liked the chance to explain to them that, as a teacher and student of politics, I believe it to be of the utmost importance that our students be able to think critically about Israel, especially as it relates to their religious, cultural or national identities.

In this particular instance, I tried to be very explicit about putting the state of Israel on the one hand and the student’s identity, religious and otherwise, on the other. From where I stand, these are separable and, in fact, need to be separated. The fact that it was interpreted as religious discrimination by numerous members of the UM community and beyond, and that this interpretation was then shockingly legitimized by the most powerful university administrators, attests to colossal work ahead of us—as educators, as students, as American Jews—to be able to discuss bravely and with sincere disagreement what Israel means to each of us.

I have since met with Associate Dean Ceballo, who wrote me the October 4th email, to talk about what happened. At the time of the meeting, on October 9th, I had not yet read the president and provost’s letter to the University of Michigan community. While the rest of the campus was reading their perspective on the situation, I sat in a room at a small conference table with Associate Dean Ceballo, the chair of the political science department, my union representative (thankfully), and a university HR official. In addition to asking whether I would be willing to write a generic letter of recommendation that would go in the student’s file, the Dean asked me to detail all the different ways I had considered responding to the student before sending the email that I did: Did you direct the student to another professor who could write on their behalf? Did you offer to meet with the student?

What if we posed some of the questions asked of me back to the university administration? Did an administrator direct the student to another one of their instructors so they could complete their application? The Washington Post reported that Associate Dean Ceballo had already offered to write the student’s recommendation letter by the time she spoke to me, so she, for her part, would have to answer for offering to write a letter of recommendation on behalf of a student whom she presumably does not know in any meaningful capacity. Did the administration consider facilitating a meeting between the student and me to help both of us understand the thoughts and feelings of the other? What individual harm could have been undone if someone, anyone, had taken this route?

The failure to encourage open and honest communication between instructors and students by the university administration in this instance demonstrates at least two grave failures: a failure to model for our students that we are all members of an academic community of respected equals, and a failure to accept and confront the presence of high-stakes politics in this line of work, which made it impossible for the administration to respond gracefully in the moment.

More important than how my situation was handled, however, is that these recent events have raised questions about the global political impact of public universities. University of Michigan should be held accountable for the way that institutional ties between UM and Israeli universities certifies and strengthens the occupation, especially seeing as UM students and researchers are for the most part prohibited from studying in Gaza, nor are there any study abroad partnerships with Palestinian universities for UM undergraduates to attend. Regardless of whether or not the University changes its relationship to Israel/Palestine, at the very least, individuals who hold positions within the university must nevertheless be free to engage in critical discourse and disagreement about the university’s purpose. It also means that no single individual, not even the university president, should have the last word on what it means to act in the best interest of the students. Scaring faculty and students into hiding their allegiances to BDS, or any other movement for justice, is simply not in the community’s best interest.

Lucy Peterson is a graduate student in the Political Science Department at the University of Michigan.