Trump’s “Disloyalty” Comments Are What the Jewish Right Believes

The idea that Jews must be loyal to Israel doesn’t originate with the president. 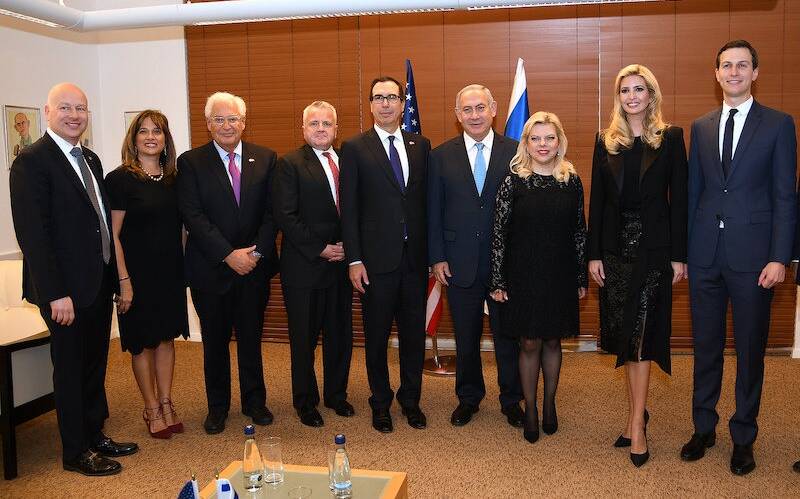 ON TUESDAY, Donald Trump told White House reporters that any Jew who votes for a Democrat is showing “either a total lack of knowledge or great disloyalty.” In the outcry that followed, many Jews across the political spectrum rightly pointed out that “disloyalty” is a trope that has been deployed again and again against Jews, from The Protocols of the Elders of Zion to Mein Kampf to the McCarthy era. According to this antisemitic canard, Jews are inherently disloyal to the governments of the nations we inhabit; our true loyalty lies elsewhere—perhaps with Bolshevism, or with a transnational conspiracy to control the global financial system.

But while Trump’s most overtly white supremacist supporters may well have heard his remarks this way, his doubling down over the following days made clear that his point was slightly different. Trump wasn’t precisely accusing American Jews of being disloyal to the United States, as past antisemites—for instance, Henry Ford, whose wisdom the president cited in a separate context yesterday—have done. Rather, he was arguing that American Jews are being disloyal to Israel, a state where most of us have never lived and whose policies many of us fervently oppose.

Jewish Currents readers don’t need to be persuaded that the president is a bigot, and don’t require a list of examples of his antisemitic comments over many years. The question, as always, is who is influencing his thinking. It’s become a commonplace observation that Trump always says the quiet part loud, but who is saying it quietly?

The answer lies with the Jewish right, by which I mean the institutions and individuals who broadly represent the 24% of American Jews who voted for Trump in 2016 (the 71% who voted for Hillary Clinton are the ones allegedly displaying “either a total lack of knowledge or great disloyalty”). Trump is surrounded by such figures, from his son-in-law Jared Kushner to his ambassador to Israel, the vehemently Islamophobic bankruptcy lawyer David Friedman, to the Orthodox Jewish political operative Jeff Ballabon. The worldview of the Jewish right is indistinguishable from what Trump told reporters, but it consistently receives far less media attention. They believe that Jews in the US owe our loyalty to Israel, and that supporting the uncompromisingly pro-Israel Republican Party over the more tepidly pro-Israel Democratic Party is necessary to express that loyalty. To them, Trump’s warm friendship with Benjamin Netanyahu and his pro-Israel policies like moving the US embassy to Jerusalem outweigh and excuse his relationship with the antisemitic far right. In short, they prefer the company of Trump, and of his white supremacist supporters, to that of the vast majority of their fellow American Jews.

Consider the Republican Jewish Committee (RJC), which yesterday tweeted: “We take the President seriously, not literally. President Trump is pointing out the obvious: for those who care about Israel, the position of many elected Democrats has become anti-Israel.” In a follow-up tweet, they added: “When Tlaib and Omar talk loyalty, they’re questioning American Jews’ loyalty to the United States. President Trump is talking about caring about the survival of the Jewish state.” This attack on Rashida Tlaib and Ilhan Omar, the only two Muslim women in Congress, made clear that the RJC has a very specific definition of antisemitism: it refers to criticism of Israel and its occupation of the West Bank, and it does not refer to direct attacks on the loyalty of Jews. Similar sentiments have been expressed this week by RJC’s executive director Matt Brooks, by the Jewish Republican congressman Lee Zeldin, and by the conservative Jewish writer David Harsanyi, among many others.

Unfortunately, the position of the Jewish right holds significant weight with the centrist institutions and pundits who tend to define the conventional wisdom on antisemitism. The Anti-Defamation League’s CEO Jonathan Greenblatt condemned the president’s remarks, but took another day to describe them as antisemitic after facing significant criticism—a courtesy he did not extend to Omar’s infamous comments about the Israel lobby (which never mentioned Jews at all), which he responded to with an op-ed in USA Today entitled “Ilhan Omar's comments were anti-Semitic rhetoric, let's not beat around the bush.” Similarly, Batya Ungar-Sargon, the opinion editor of the Forward, went on MSNBC to argue that while Trump’s comments were antisemitic, the Democrats likewise need to call out antisemitism on their side—a reference to Tlaib and Omar, the latter of whom Ungar-Sargon has previously compared to David Duke. By deflecting the blame to them, Ungar-Sargon effectively reinforced the point Trump was making about Jewish disloyalty in the first place.

New York Times opinion editor Bari Weiss—who will be spending September promoting her new book, How to Fight Anti-Semitism, in a series of elite Jewish institutional venues—released an op-ed on Wednesday in which she argued that the real issue with Trump’s comments is that he can’t be trusted to stand by Israel. “I have zero doubt that if the prime minister of Israel criticized Mr. Trump on the wrong day or in the wrong way, the president would dump Israel at that very moment,” she writes.

Vote for a party whose base seems increasingly in thrall with newbie politicians who are unapologetic supporters of the B.D.S. movement, a new face of old anti-Semitism, even as the party’s leadership remains pro-Israel. Or vote for the party led by a man who is loyal to nothing but himself, who actively sets Americans against one other [sic], and, more, genuinely seems to thrill at creating a disunited state of America.

What’s notable here is that it’s Tlaib, Omar, and the BDS movement that get described as the new face of antisemitism; the president’s flaws are more characterological, and Weiss’s issue with the Jewish right is that it stands with a dishonorable man, not that its support for Israeli territorial maximalism is morally abhorrent.

Sadly, this view is not limited to Weiss; it is the implicit perspective of a wide array of mainstream Jewish institutions, which have spent decades conflating unquestioning support for Israel with Jewish identity in the diaspora. For the past few years, donor-advised funds affiliated with Jewish federations have blocked donations to Jewish groups like IfNotNow that challenge the occupation directly. Earlier this year, the Jewish Community Relations Council expelled the Boston Workman’s Circle for being willing to partner with organizations that support BDS or identify as anti-Zionist, like Jewish Voice for Peace. Hillel International, the home for Jewish life on college campuses, has established similar red lines around partnerships and events. Those currently counting themselves among Trump’s “disloyal” should also take note of the status quo expectations of loyalty that underlie Jewish institutional life.

Of course, the Jewish right fully embraces those expectations, and for that reason it sees Trump more clearly than these centrist institutions and pundits do. The right’s goal is the seizure of Palestinian land and the erasure of the Palestinian people at any cost, and they accurately understand Trump as the politician most inclined to carry it out. Trump has done exactly what they want, and in turn they are willing to support him no matter what he says about Jews. His contempt for the large majority of American Jews is their contempt, expressed verbatim. It’s a contempt they share with the Israeli government, and with the strain of the white supremacist far right that sees Israel as the proper ethnonationalist homeland for all Jews and as a bulwark against Muslims.

For many of us in the “disloyal” majority, this has been an especially trying week. Trump’s manifest racism, sexism, and xenophobia are troubling to progressive Jews even when they’re not directed at Jews, because they offend core pluralistic and humanistic values. But his latest comments aren’t just a reminder that bigots always eventually come for the Jews; they’re also a reminder that, if it means Israel’s far-right government gets its way, a large minority of Jews are willing to be complicit when it happens.