The Two Paths of Palestinian Islamism 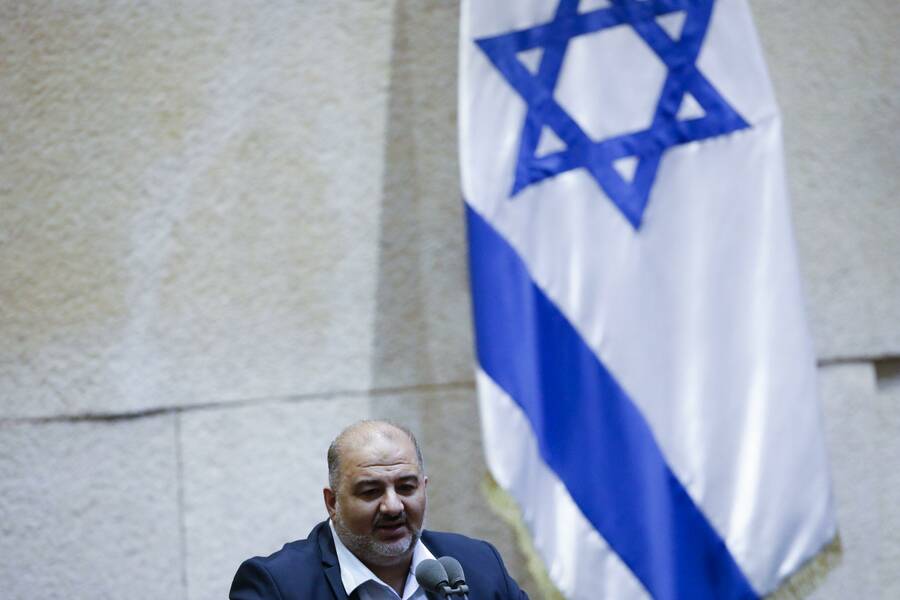 For the first time ever, Israel’s newly formed governing coalition includes one Palestinian Islamist Party, Mansour Abbas’s Ra’am. Meanwhile, the very same government has only recently agreed to a cease-fire with another Palestinian Islamist organization, Hamas. While Ra’am and Hamas are very different entities, they have some common origins, and understanding the divergence between them is crucial to making sense of the politics of Israel/Palestine right now.

For background on this divide, I talked about the history and development of Palestinian Islamism with Khaled Al Hroub, a professor in residence at Northwestern University in Qatar and the author of the books Hamas: A Beginner’s Guide and Hamas: Political Thought and Practice. Our conversation below has been edited and condensed. It originally appeared in yesterday’s email newsletter, to which you can subscribe here.

Khaled Al Hroub: As with Christianity or Judaism, Islam has many interpretations. Within the Palestinian context, there have been maybe a dozen Islamist movements since the British Mandate period of the 1920s, all of them drawing different conclusions from the same sacred texts.

Hamas is a militant resistance movement—they believe that Israel is a colonial power and that the only way to get rid of Israel and the occupation is resistance, and they offer a religious justification to support this approach. But within Israel, there’s a different Islamist viewpoint that says that the reality is that Palestinians live within this state and are forced to deal with its racist policies, but maybe they can change certain aspects of it—and they provide religious justification behind this approach. So diverse interpretations of the same source can be used in support of whatever politics you are following.

PB: Do both Hamas and the Palestinian Islamist branches inside Israel proper have roots in the Muslim Brotherhood?

KAH: Yes, in terms of their intellectual outlook and general school of thought. The Muslim Brotherhood is the mother of all Islamist organizations in the region. It started in Egypt in 1928, then spread to neighboring countries like Palestine, Syria, Jordan, and Iraq. The Palestinian Muslim Brotherhood, specifically the official branch in Jerusalem, was founded in 1946, two years before the creation of Israel. Hamas can trace its roots to that. For roughly the next 40 years, they were on the margins of the Palestinian politics. But they started to rise in the 1980s, as a Palestinian reflection of the Islamist phenomenon in the wider Middle East and beyond—the regional context intersected with the local context of the Israeli occupation, transforming what had been the Palestinian Muslim Brotherhood in the West Bank and Gaza Strip into Hamas in 1987.

The defining difference between these two phases is the strategy of resistance. Before Hamas, the Brotherhood didn’t prioritize resistance or confrontation with Israel. Instead, they focused on institution-building—on mosques, clinics, schools, social networks, and charities, which they saw as a prerequisite stage for whatever followed, even if it was resistance. They saw the need to strengthen the foundation of Islamism, and then they could build something strong upon that. By the first Intifada in 1987, they decided they had become strong enough to engage in resistance and confrontation.

The Palestinian Islamist movement inside Israel was shaped by more or less the same influences from abroad—by the rise of the Islamism in the wider region in 1980s and ’90s as well as in the West Bank and Gaza, and from within in response to the weakening of national and leftist parties among the Palestinians inside Israel. The defeat of the Palestine Liberation Organization (PLO) in Lebanon in 1982 was a turning point. They ended up exiled to Tunisia, far away from Palestine geographically, but also undermined politically, militarily, and ideologically. So by the end of 1980s you have two curves intersecting: the decline of the PLO and the nationalist/leftist Palestinian movement, and the rise of the Palestinian Islamist movement to replace it.

PB: Inside Israel proper there are two branches, called the northern and the southern branches. How did that division come about, and does it extend to a division on whether to join the Israeli government?

KAH: In the mid-1980s, there was a heated debate on whether or not participating in Israeli politics means implicitly recognizing Israel and its political system as legitimate. This resulted in a split between two groups. One supported political participation in the Knesset; it was led by people like Abdullah Nemer Darwish, a pragmatist who was the spiritual founder of the entire Islamist movement inside Israel. The other group opposed the idea and was led by Sheikh Raed Salah, who is now in an Israeli prison, and who saw this as a slippery slope and called for remaining disengaged with Israeli politics and focusing energy elsewhere. The pragmatist or “southern” branch has continued to take part in these elections in order to try to influence Israeli politics. So now we have two arguments, anchored in the same religious background but offering different interpretations, and reflected in a split that continues to this day.

PB: Ra’am is now in a government that is blockading Hamas-controlled Gaza. How do Hamas and Ra’am—two different Palestinian Islamist movements, with one now engaged in a constant intermittent military conflict against Israel, while the other is part of the Israeli government—talk about one another?

KAH: Hamas has a negative if ambivalent view of Ra’am and its leader, Mansour Abbas. I’ve read statements from some Hamas figures describing Abbas as becoming part of the Israeli apartheid system. However, others in Hamas argue for making some allowances for the context that Abbas functions within—they disagree with his politics, but they don’t dismiss him entirely and they mute their criticisms. Recently, Musa Abu Marzouk, who used to be the head of Hamas’s political bureau, tweeted a harsh statement about Ra’am and Abbas for joining this right-wing Israeli government, which is opposed to Palestinian rights, and later he deleted the tweet. Maybe he had second thoughts, or some of his colleagues advised him to do so. Generally, Hamas is closer to the other Islamist branch within Israel, the one led by Sheikh Raed Salah. But I think they’re keeping the door open for both. They regard Ra’am as having a controversial political approach and a different interpretation of Islamic teaching that they disagree with but that still has its own legitimacy.

PB: One thing a lot of Jews know about Hamas is that its first charter was clearly antisemitic, that this is not a movement that seemed to accept a Jewish presence in Israel-Palestine. But in 2017, Hamas rewrote its charter; it still clearly rejects the existence of a Jewish state, but the charter doesn’t have these explicit antisemitic elements anymore. Can you explain why this changed?

KAH: To be fair, in 1990, just two years after the publication of the first charter, Sheikh Ahmed Yassin—the founder and spiritual leader of Hamas—made some clear public statements differentiating between Jews and Zionists and saying that Hamas’s battle was not against the Jews. The charter of 1988 was written by one single highly revered leader, Abdul Fattah Dukhan. He wrote the draft without proper internal consultation within Hamas. There was a rush to publish the document during the heat of the first Intifada. Soon after its publication, it proved to be a burden, and because of its unrepresentative nature, other Hamas leaders tried early on to fix it by issuing statements that diverged from the views presented in the charter. At the same time, they felt it would give the wrong message if they changed their charter just a few years after its publication.

In the early 1990s, they issued what they called the Abu Marzouk initiative. Basically, they accepted the idea of a Palestinian state within the 1967 borders, but with very ambiguous language, which was a huge shift. They kept making pronouncements to differentiate between Jews and Zionists, but the charter, with its antisemitic language, remained a nightmare for them. But at the same time, they felt very awkward about canceling the charter; it would have been like the PLO renouncing the Palestinian national charter, and they wanted to demonstrate that they were more steadfast than the PLO and not making similar concessions. Finally, in 2017, they issued a totally new charter with none of the old language, after years of critics pointing out that individual statements by Hamas leaders differentiating Jews from Zionists weren’t reflected in the charter. This version made clear that the religion and ethnicity of the occupier was irrelevant; even if Palestine were occupied by Arabs or Muslims, Hamas would still resist.

PB: But Hamas still believes that Palestine should be an Islamic state, right? Most Jews would probably ask how Jews could possibly live as equal citizens in an Islamic state, so what does Hamas mean by that and how would you respond to such concerns?

KAH: I think what Hamas had in mind when they used to talk about the Islamic state in Palestine—which, by the way, is no longer talked about after the new 2017 charter—is the historical example of Muslim empires in which Jews, Christians, and other religious minorities lived relatively peacefully. It wasn’t always perfect, but compared to medieval Europe—and certainly compared to modern Europe during the Holocaust—Jews were treated better in Muslim Andalusia or North Africa or the Ottoman Empire. Nowadays, the term “Islamic state” has come to refer to an entity led by a terrorist group, all anchored in the Islamophobic Western imagination. Many Muslims, not just Hamas, have in mind this reference to a golden age when all Muslims, Christians, and Jews coexisted peacefully together under the Muslim state and where Jews occupied high ministerial positions in Muslim Spain, for instance.

What makes that model complicated to follow in our times is that we no longer live in big empires, but in a system of nation-states, which would potentially include an independent Palestine. Hamas has tried to keep things ambiguous, with vague statements about coexistence. But the final decision shouldn’t be reduced to what Hamas wants. Hamas is a significant political organization, but there are millions of Palestinians both in and out of Palestine, and I doubt that most of them want to live in an Islamic state. That’s why Hamas’s latest charter, from 2017, has mitigated all the religious language.

At the end of the day, Hamas’s behavior is dictated by political reality. We can say that the movement functions with two constituting elements: religious and political. The first is deployed in mobilization and recruiting, the other in daily politics. Sometimes these two components function well together, while other times there’s tension. Religion is still very powerful, but right now I would say politics is in the driver’s seat.

Newsletter
The Hijacking of Atonement
In Germany, the legacy of the Holocaust is used to silence critics of Israel.
Peter Beinart
Report
How a Defender of Palestinian Rights Lost His Way
As the Washington director of Human Rights Watch, Tom Malinowski fought for justice in Israel-Palestine. All that changed once he got to Congress.
Peter Beinart
Sign up for our email newsletter, featuring exclusive original content