The Right’s War on “Wokeness” in Virginia 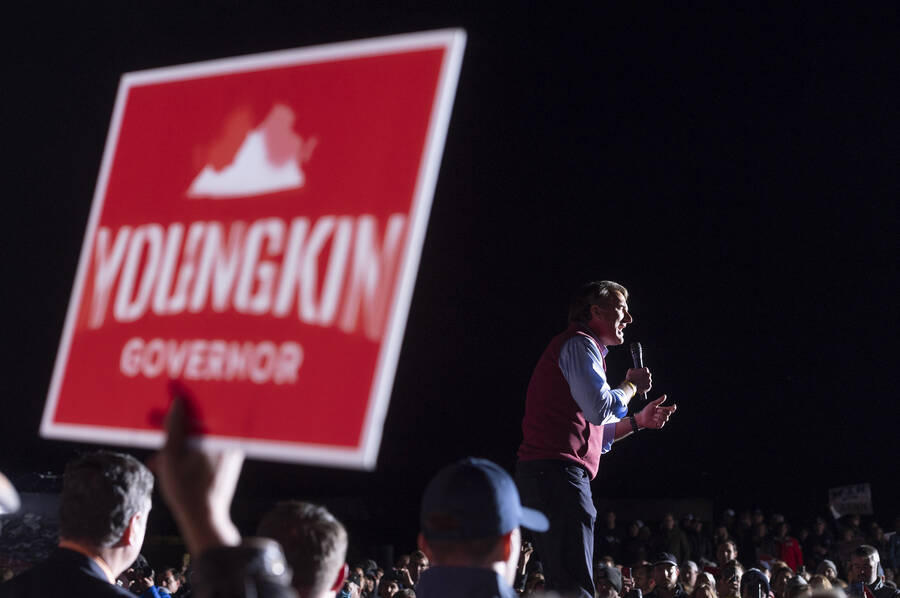 HOW DO WE PROCESS the terrible political news across the country this past Tuesday? In Virginia, one of the few states that has been trending solidly blue over the past few cycles, the centrist former Democratic Gov. Terry McAuliffe lost by a clear margin to Republican Glenn Youngkin, who ran on a moral panic around the Critical Race Theory (CRT) supposedly being taught in the Commonwealth’s public schools. In Buffalo, India Walton, the democratic socialist who secured the Democratic Party nomination for mayor, lost to a write-in campaign by the 16-year incumbent mayor Byron Brown, who retained support from many establishment Democrats both in New York and nationally. In Minneapolis, the ballot referendum to replace the police department with a Department of Public Safety that would employ public health workers alongside cops—which Jewish Currents Managing Editor Nathan Goldman wrote about in last week’s newsletter—was rejected by an overwhelmingly Democratic electorate. In New York City, where the former cop and left-punching Democrat Eric Adams predictably defeated his Republican rival Curtis Sliwa in the mayoral race, voters rejected ballot initiatives that would have expanded voting rights. In New Jersey, Democratic Gov. Phil Murphy, generally seen as one of the more accomplished progressive executives in the country, only narrowly held on against a Republican challenger. And in Washington, the outlook for President Biden’s proposed Build Back Better package—which is championed by progressives like Bernie Sanders and which, even after significant scalebacks and compromises, would represent meaningful progress on issues from climate to healthcare to child care—is looking shakier than ever.

Notwithstanding a scattered handful of local victories, the overall picture this week is grim. As inevitably happens after a rough election night, establishment-friendly Democrats are insisting that the party has moved too far left and needs to moderate to appeal to the white suburban and exurban voters who defected to Youngkin in Virginia; meanwhile, many on the left counter that Joe Biden and Terry McAuliffe are hardly radical socialists, and that Democrats might be doing better if they had moved more aggressively to deliver meaningful results to voters over the past nine months. Still others are pointing out, plausibly, that the entire political system is structurally biased against Democrats in a way that ongoing Republican assaults on voting rights will only exacerbate, and that a progressive agenda at the national level might be doomed regardless of what Democrats do.

No matter what strategy makes the most sense for Democrats, all progressives ought to be concerned about the right’s emerging war on wokeness, which was on display in Virginia and by all accounts is likely to be deployed nationally going forward. However the left proceeds in terms of organizing priorities, we will have to face the arguments our opponents are making and their very real potential to resonate with large numbers of voters.

Culture wars have been central to American politics for decades, but the culture wars many of us are familiar with—over abortion, gay rights, guns, and prayer in schools—are no longer the ones conservatives are emphasizing the loudest, even though they remain very much in play in terms of actual policymaking. Over the past year or so, Republicans have drafted a new culture war script, and now they’re employing it to great effect in places like affluent Northern Virginia, where progressives will need to find a way to counter it to have any hope of winning power.

For a representative example of the new script, consider two pieces that Batya Ungar-Sargon—the former opinion editor of the Forward, who is now deputy opinion editor for the increasingly right-wing Newsweek—wrote this week for the extremely lucrative Substack of fellow culture warrior Bari Weiss. Ungar-Sargon, who as recently as three years ago presented herself as a progressive and a supporter of the Black Lives Matter movement, has reinvented herself as a right-winger; days before the election, she spoke at the National Conservatism Conference in Florida, which represents an emerging strain of right-wing thought pioneered by figures like Yoram Hazony. The conference’s website describes national conservatism as “the best path forward for a democratic world confronted by a rising China abroad and a powerful new Marxism at home. We see the rich tradition of national conservative thought as an intellectually serious alternative to the excesses of purist libertarianism, and in stark opposition to political theories grounded in race.”

In her pieces for Weiss, as well as in a forthcoming book, Ungar-Sargon lays out the core worldview that arguably powered Youngkin’s victory in Virginia: the left, in her telling, has become an insular, college-educated ruling class that is forcing its radical ideology onto working-class Americans through its control of public health and educational institutions, as well as elite universities and the mainstream media. Politicians and pundits who adopt this worldview have made their central enemy Critical Race Theory—which is not literally what is being taught in Virginia public schools, but which has quickly become the right’s shorthand for any attempt to teach students about the history of slavery and segregation, and for the broader cultural and political legacy of last year’s mass uprisings on behalf of racial justice. Ungar-Sargon is just one of a new breed of culture warriors peddling versions of this narrative, including, prominently, Christopher Rufo, a senior fellow at the Manhattan Institute who is widely credited or blamed with advancing the narrative around the threat of CRT, and who Weiss hailed on Tuesday night as “the most important and effective conservative advocate in the country.”

The right’s horror at what it calls CRT goes hand-in-hand with its panic over basic recognition of trans rights; backlash against efforts to defund the police; the growing resentment of overburdened parents toward public health agencies mandating masks and vaccines and delaying the reopenings of public schools; and a general sense that progressives are condescending to regular voters and forcing the language of social justice on an electorate exhausted by the pandemic and demanding material relief.

There are many holes to poke in the right’s triumphant new narrative. For one thing, the Biden administration has been trying to deliver material relief to working Americans through its stimulus and infrastructure bills, which the most left-wing members of Congress are squarely behind; the Republicans are the ones who unanimously oppose benefits that would help their constituents, and the Senate’s two moderate Democrats, Joe Manchin and Kyrsten Sinema, are responsible for watering down their colleagues’ bills. For another, Loudoun County, Virginia—the Washington suburb which became the center of the Youngkin campaign’s demagoguery against CRT, and the state’s pivotal battleground—has the highest median income of any county in the United States, making its residents’ concerns a dubious stand-in for the anxieties of the working class. And while this last point can easily descend into pedantry, it’s only fair to point out that what is being taught in Virginia’s public schools can’t reasonably be described as CRT—a graduate-level body of theory—and more importantly, that teaching students about the history of structural racism in this country is not a form of brainwashing, as conservatives imply.

Instead of contesting this narrative, mainstream Democratic media voices like James Carville are urging the party to abandon “wokeness” after Tuesday’s results (and ahead of next year’s midterms, which recent history suggests are likely to go poorly). Despite this pressure, the left should not compromise on our bedrock principles in support of universal rights to healthcare, education, housing, and an inhabitable environment, and against all forms of bigotry and carceral violence. That progressive ideas provoke backlash doesn’t mean that they’re wrong, much less that they should be withdrawn rather than vigorously defended.

At the same time, whatever we’re doing clearly isn’t working, either at defeating the right or at winning over Democratic primary voters—including quite a lot of working-class voters of color. We have to acknowledge that we are no longer operating against the backdrop of a historically unpopular Trump administration; much of the electorate has quickly moved on from the past four years, and will hold Democrats responsible for all of the ongoing suffering and anxiety in the wake of a traumatizing pandemic. The new conservative critique of wokeness may be entirely in bad faith and a cover for myriad bigotries, but there is a kernel of truth to its contention that the left’s discourse has become insular, self-congratulatory, and disconnected from the needs of working people. If we are to avoid more nights like Tuesday, we are going to have to find a way to take up arms in the culture war and communicate our own compelling vision, rather than defining ourselves as simply “not Trump.” Finding a narrative capable of countering the right’s new script is the work that awaits us—a daunting task, but one we can’t afford to avoid.