The Past Is Not Past

The Romanian filmmaker Radu Jude interrogates his country’s antisemitic history and its echoes in the present. 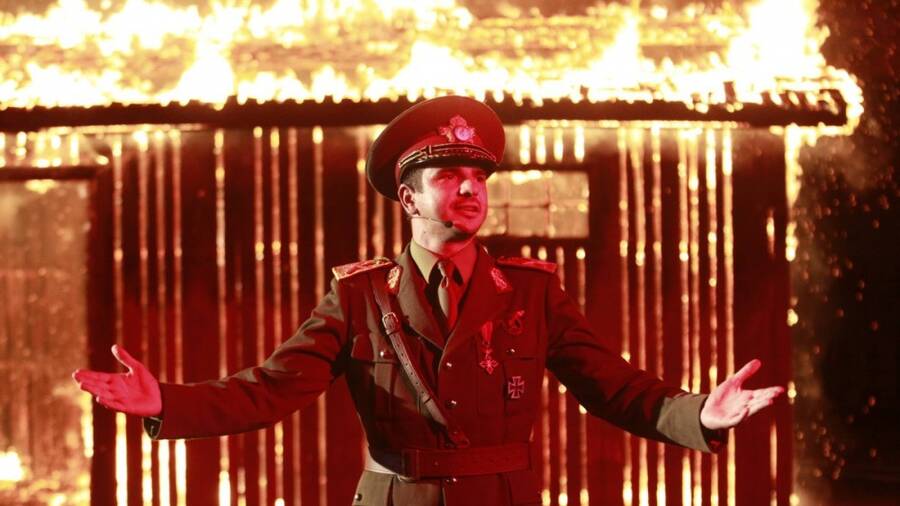 ROMANIAN DIRECTOR RADU JUDE’S films have not been shy about confronting his country’s historic antisemitism. The subject was an almost offhanded undercurrent in the first film to gain him wide attention, Aferim!, became a consistent bass note in his moving adaptation of the works and life of the Romanian-Jewish writer Max Blecher in Scarred Hearts (now out on DVD through Big World Pictures), and moved to center stage in his documentary Dead Nation. It is again at the heart of his latest film, the brilliant “I Do Not Care if We Go Down in History as Barbarians,” Romania’s candidate for an Academy Award nomination.

Dead Nation was a bold film, the visuals made up of banal photographs taken by a village photographer from the mid-1930s until the mid-1940’s—that is, from the rise of the fascist Iron Guard to the establishment of People’s Romania. In counterpoint to the mostly inoffensive images, the text was constructed from the diary entries of Emil Dorian, a Jewish physician in Bucharest, recounting the repression and killings of Jews at the hands of the Romanian government and the Iron Guard, along with radio broadcasts and voice tracks of newsreels on the activities of the fascists, the kings, and the nation’s Conducator (Romanian for führer) Ion Antonescu. The film was a brutal reminder of a past that today’s Romanians prefer to ignore, excuse, or gild.

If Jude’s insistence on the reality of Romania’s brutal antisemitic history has been accepted by those who govern Romania—if only, as the filmmaker has said in interviews, as a prerequisite for acceptance into the EU—it has been attacked by the broader public, which insists on viewing Romania as a victim and not a perpetrator nation. Jude returns to Romania’s historic crimes and, in an equal measure, its refusal to accept them, in “I Do Not Care if We Go Down in History as Barbarians.” The title is a quote from Antonescu at a Council of Ministers meeting, referring to any possible future actions by his troops in the coming attack on the USSR—an attitude which led to the October 1941 massacre of 18,500 Jews in Odessa by Romanian fascist auxiliaries of the Germans under Antonescu’s leadership.

In the film, Jude transposes his experiences as a filmmaker onto a fictional theater director, Maria Marin, played with a perfect mix of anger and exasperation by Iona Iacob, who is staging a reenactment of the Odessa massacre. The film follows the rehearsals for the reenactment and its performance in a main square of Bucharest. Throughout, Maria must respond to her countrymen’s criticisms of her historical knowledge, her political point of view, and her motives in making such a film. What is the good of stirring up these old issues?, they ask. Why show the brutality? Weren’t Romanians the victims of the Nazis? Wasn’t it the Nazis who were responsible for the deportations to the camps and the Odessa massacre, not the Romanian fascists?

Facts at the ready, Maria can recite chapter and verse from the standard works of Holocaust historiography, proving Romania’s role in the mass murder, which earns her little credit from those who oppose her. Accused of being anti-Romanian, Maria insists instead that her show is about “facing our own history.”

Facing their own history is apparently something the Romanians have done poorly. At one point, Maria stumbles across a TV screening of a 1993 hagiography of Antonescu by Sergiu Nicolaescu called The Mirror, part of post-communist trend of rehabilitating the wartime leader and mass murderer, a trend that also saw streets and squares named for him.

Maria engages in two lengthy arguments with Movila, a bureaucrat involved in the reenactment, who insists that she tone down the show, that “never again” is a hollow slogan, and that in any case, massacres are selectively remembered. Who remembers, for example, an obscure massacre in Africa carried out by Germans in the early 20th century?, he asks. Isn’t there a Darwinism of massacres, with concern for some driving out that for others that were no less serious? The public doesn’t want its face rubbed in its past sins, says Movila, “Let’s do something nice to please the rabble.”

This rabble, in the form of the audience for the reenactment, is cause for much queasiness. With swastikas projected onto a building overhead, reenactors in Wehrmacht uniforms march onto the square, singing a German marching song as the crowd happily claps to the beat. The Red Army soldiers are greeted with boos and catcalls, while the Romanian soldiers, standing beneath Antonescu’s projected image, are loudly cheered.

A priest’s inspirational speech to the troops, quoting the antisemitism of figures throughout modern Romanian history, receives applause, and when one of the mock- Jews attempts to escape the impending murders, he is captured by the crowd and turned over to the killers. Finally, when the building into which the Jews have been herded is set aflame, killing all those within, the crowd can do no better than take selfies.

In interviews, Jude has said the audience within the film  is not cheering the mass murder, but is perhaps just getting into the spirit of things. Perhaps. But Jude has made clear, in this and his other films, that racism is a persistent part of the Romanian character. In the film, cast members of the staged reenactment tell the director that they refuse to participate alongside gypsies, and some praise and defend Antonescu, who the film reminds us was described by Goebbels as “more extreme than us.”

The best of Romanian cinema—films like The Death of Mr. Lazarescu or 12:08 East of Bucharest or Police, Adjective—is the equal of any cinema in the world, and has given us an unflinching portrait of a grim present, rife with indifference and hypocrisy. Radu Jude’s “I Do Not Care if We Go Down in History as Barbarians” is a fearless, brilliant, and necessary film, a rejection of the nationalism sweeping so much of the world.