“The One Issue That Matters”

Time and again, Michael Bloomberg’s unquestioning devotion to Israel has led him to defend immoral and disastrous policies. 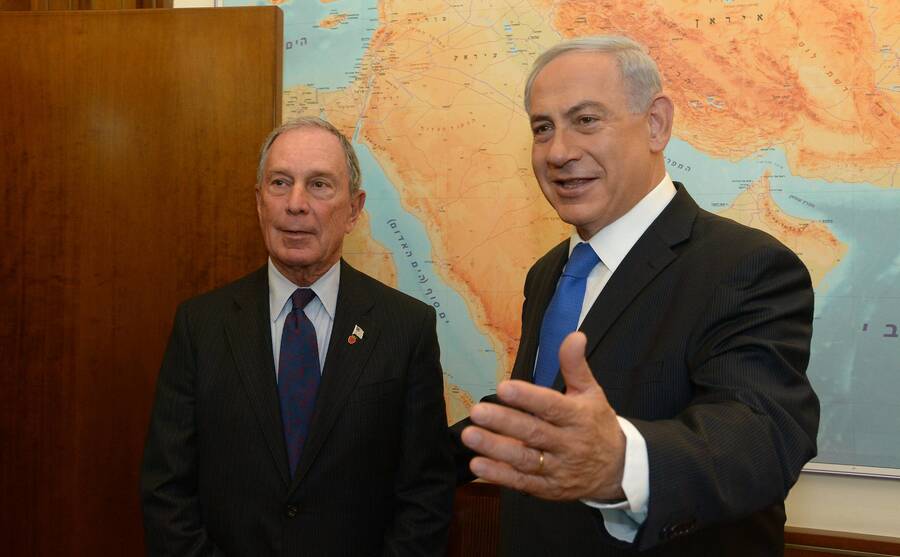 THE CRITICS who think Bernie Sanders isn’t Jewish enough—or isn’t Jewish in the right way—now have a clear alternative in the Democratic presidential race: Michael Bloomberg. Not only is the former New York mayor rising in the polls; he’s also contrasting his Jewish identity with that of the senator from Vermont. Late last month, Bloomberg sprinkled a speech at the Aventura Turnberry Jewish Center in South Florida with the kind of religious references (the Ten Plagues, Moses descending from Mount Sinai) and cultural schmaltz (the pickles at Wolfie’s Deli) that Sanders generally eschews. “I’m not the only Jewish candidate running for president,” Bloomberg added. “But I am the only one who doesn’t want to turn America into a kibbutz.”

Politically, however, the most significant difference between Sanders and Bloomberg’s Jewish identities concerns Israel. Sanders has tried to reconcile his support for the Jewish state with his concern for regional peace and human rights; Bloomberg has not. And while Sanders has aligned himself with a generation of young, progressive Jews, Bloomberg is aligned with the hawkish Jewish establishment. He already boasts a Jewish “Leadership Council” brimming with former officers of Jewish Federations, the American Jewish Committee, the Conference of Presidents of American Jewish Organizations, and at least eight past or present donors to AIPAC. This alignment, together with Bloomberg’s history of remarks about Israel, suggests that as president he would halt the Democratic Party’s tentative shift toward a more progressive perspective on Israel/Palestine and the entire Middle East.

Time and again, Bloomberg’s unquestioning devotion to Israel has led him to defend immoral and disastrous policies. In 2004, he told an AIPAC reception that on “the one issue that matters . . .  standing up for Israel, which I think is like standing up for America, George Bush has been there.” In fact, Bush’s invasion of Iraq—which Bloomberg supported—damaged both Israeli and American security by creating a power vacuum that empowered Iran and enabled the rise of the Islamic State.

Bloomberg has also lauded Benjamin Netanyahu; in 2014, he called the Israeli prime minister a “great leader and friend.” And despite Netanyahu’s demonization of his own Palestinian citizens and relentless opposition to a viable Palestinian state, the former mayor repeatedly sided with him over Barack Obama. Michael Oren, who interacted with Bloomberg frequently while serving as Israel’s ambassador in Washington, last year told The Jerusalem Post that Bloomberg “is not a progressive. He has a deep tribal connection to Israel” that made him “very upset about the [Obama] administration’s treatment of us.”

Bloomberg broke with Obama on the 2015 Iran nuclear deal, which he opposed. He also parted ways with Obama on Israel’s 2014 war in Gaza. In July of that year, when the Obama administration called Israel’s bombing of a United Nations school “totally indefensible,” Bloomberg objected. Repeatedly referring to the Israeli government as “us,” the former mayor insisted, “Nobody is attacking schools or hospitals, we’re attacking Hamas,” adding that “if Hamas hides among the innocent, the innocent are going to get killed.” Bloomberg’s claim, while common among elected officials in both parties, appears to have been untrue. A Human Rights Watch investigation found that while Hamas had at times stored weapons in schools while students were out of session, none of the three United Nations schools that Israel attacked in Gaza in July and August 2014 “were being used for military purposes.”

Bloomberg also claimed that since Israel had “pulled out of Gaza”—withdrawing its settlements unilaterally in 2005—rocket fire from the Strip was the equivalent of “contiguous countries . . . firing rockets at America.” But Gaza was not—and is not—an independent country. As the Israeli human rights group Gisha has noted, Israel controls Gaza’s “borders, airspace, territorial waters, population registry, tax system,” and “supply of goods.” Israel even enforces a “buffer zone” inside the Gaza Strip from which it bars Palestinians from entering. But that didn’t stop Bloomberg from declaring that the suffering in Gaza—which endured a blockade so intense that Gaza residents could not import milk or export tomatoes without Israel’s approval—was “not Israel’s fault.”

Since launching his presidential run, Bloomberg has continued to equate supporting Israel with near-blank check support for whatever any Israeli government does. “I will never impose conditions on our military aid, including missile defense—no matter who is prime minister,” he told the Florida crowd last month. While Bloomberg supports the two-state solution in theory, he has expressed a willingness to let Donald Trump and Netanyahu gut the concept of any real meaning. While most Democratic candidates slammed Trump’s recent “peace plan,” Bloomberg’s reaction, as Aiden Pink noted in The Forward, was “more equivocal.” Bloomberg declared it “good that President Trump’s plan affirms” a “negotiated two-state solution”—even though Trump’s plan involved no negotiations whatsoever with the Palestinian leaders, and envisions Israel controlling much of the West Bank land on which Palestinians had hoped to build their state.

Bloomberg now says that the same “commitment to Israel” that led him to oppose the Iran deal has led him to oppose Trump’s 2018 withdrawal from it. But while Bloomberg supports rejoining the agreement, his Iran views remain more hawkish than many of his 2020 opponents. As one aide told BuzzFeed, the former mayor supports “aggressively negotiating to improve” the nuclear deal. That sounds reasonable. But it means the United States—having already brazenly violated the agreement under Trump—would threaten to violate it again unless Iran made additional concessions, thus further undermining America’s reputation as a nation that keeps its promises. Bloomberg has also distinguished himself from some of his Democratic presidential opponents with his openness to waging war against Tehran. When The New York Times recently asked candidates whether they would “consider military force to pre-empt an Iranian or North Korean nuclear or missile test,” Elizabeth Warren said no. By contrast, Bloomberg—along with Joe Biden, Pete Buttigieg, and (surprisingly) Sanders—answered yes.

To his credit, Bloomberg has not allowed his support for the Israeli government to undermine his support for the free speech rights of its American detractors. While there are serious concerns about Bloomberg’s overall record on civil liberties—both in regards to stop-and-frisk policing and the surveillance of Muslim New Yorkers—he has been a surprisingly staunch defender of the right to criticize Israel on campus. In a 2006 convocation address at the University of Chicago, he praised the university’s “support of Professor [John] Mearsheimer’s right to criticize the Israel lobby’s influence on US foreign policy.” In 2013, when numerous New York politicians—along with Alan Dershowitz and the Zionist Organization of America—attacked Brooklyn College for sponsoring a panel featuring intellectuals who support boycotting Israel, Bloomberg replied, “If you want to go to a university where the government decides what kind of subjects are fit for discussion, I suggest you apply to a school in North Korea.” It was among his finest moments as mayor.

Tragically, however, Bloomberg doesn’t recognize that the principles of individual freedom he defended at Brooklyn College also need defending inside Israel itself. “If I am elected,” he told the Aventura Jewish Center, “you will never have to choose between supporting Israel and supporting our values here at home.” But shouldn’t the values American Jews cherish at home also govern American policy toward the Jewish state? For decades, the American Jewish establishment has encouraged American Jews to embrace a moral double standard: support human rights and legal equality in the US while dismissing such ideals in Israel. Sanders—powered by a progressive, younger generation of American Jews—is challenging that dichotomy. If elected president, Bloomberg would likely enshrine it in US policy for years to come.

Analysis
For the Biden Administration, There Are No Red Lines On Israel
At the J Street Conference this past weekend, Secretary of State Antony Blinken delivered a speech fit for AIPAC.
Peter Beinart
Analysis
Israel’s Ascendant Far Right Can’t Be Understood by Analogy
In other countries, the right clashes with the center over the basic nature of the state—but Israel’s Itamar Ben-Gvir and his rivals are on the same page about ethnocracy.
Peter Beinart
Sign up for our email newsletter, featuring exclusive original content
Want original reporting and analysis on Israel/Palestine?
Sign up for the Tuesday News Bulletin.