The Limitations of the Scream 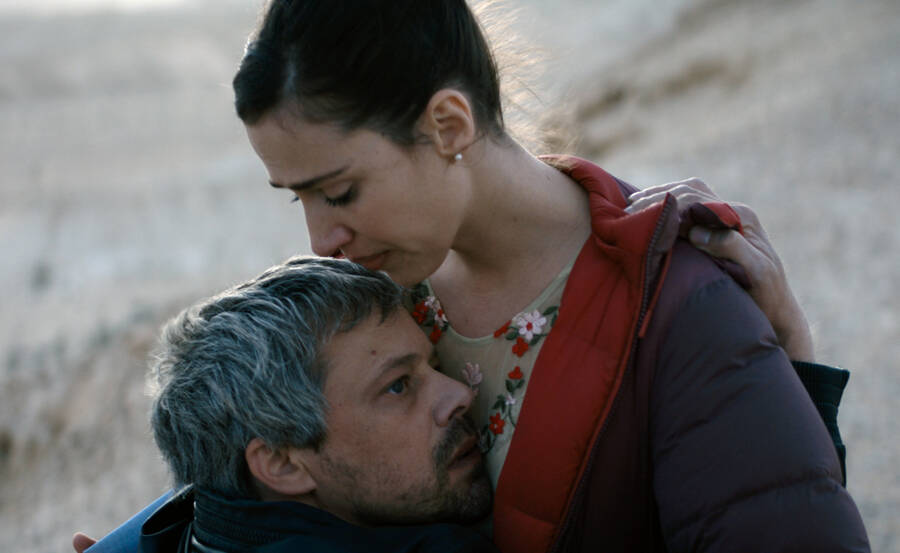 Nadav Lapid, who has earned a reputation as one of Israel’s most confrontational filmmakers, first moved to France after completing his military service, in a state of deep disillusionment with his homeland. He tells a version of this story in his award-winning 2019 film Synonyms, in which a young Israeli ventures to Paris to escape his country of birth, refusing to speak Hebrew and wrestling with feelings of complicity in a state whose politics he abhors.

In his latest film, Ahed’s Knee, which shared the Jury Prize at Cannes last year and is out this week in cities across the US and Canada, Lapid returns to Israeli soil with his most direct and personal statement about the ills of Israeli society. The film’s title is a reference to a tweet by the deputy knesset speaker and Kahanist agitator Bezalel Smotrich about the young Palestinian activist Ahed Tamimi, who slapped an Israeli soldier in a video that went viral: “In my opinion, she should have gotten a bullet, at least in the kneecap.” But Tamimi is not the film’s focus. Inspired by frustrations with former Minister of Culture Miri Regev, who antagonized Israeli artists by making loyalty to the state a condition for arts funding, the film centers on a moral conflict between a filmmaker called Y and a representative from the Ministry of Culture named Yahalom, who is tasked with getting Y to sign a form agreeing to censor himself in a talk following a screening of his new movie in a small village in the desert. Y in turn antagonizes the adoring-but-complicit Yahalom, tormenting her with angry, righteous, unfiltered and highly polemical rants about the state of the nation. Lapid deploys wild camera moves, musical interludes, and moments of jarring surrealism in order to confront viewers with the contradictions of being a principled Israeli.

I recently sat down with Lapid over Zoom to talk about Ahed’s Knee and his complicated relationship with Israel. This conversation has been edited.

Corey Atad: This is a film in many ways about censorship. How do you think your battles with the political apparatus in Israel have affected the way that you go about making movies and what shows up on screen?

Nadav Lapid: You know, it’s like a duel that we began with guns and now we’re on the level of F-16s, or, I don’t know, nuclear submarines. It’s aggravating. I feel that as time passes, I become weaker and weaker, even as my films have gained a certain authority. In general, with the state of cinema, my belief that films can change something has weakened. So in a way, I have no choice but to scream louder. This is the privilege of the weak.

CA: So the film is kind of your pushback?

NL: Yeah. There’s something about the political apparatus in Israel, it thinks itself very righteous. The sentence that Israelis love most on Earth is that their army is the most moral army on the planet. You wonder, how can they say this with such confidence? It’s based on belief. It gives you this uncontrollable desire to force them to open their eyes, even if you have to hold open their eyelids like in A Clockwork Orange.

In Israel, there is no distinction between the political apparatus and the essence, the heart of the nation. The movie talks about censorship, but I always think the worst censorship in Israel is the internal censorship, this small censor that lies in the mind and in the soul of almost every Israeli, including myself. For instance, I think that Israel is one of the only places where even artists critical of the state will justify their art by saying things like, “Ultimately, we are the best ambassadors of Israel.” As if the task of an artist is to be the UN ambassador! Can you imagine Bertolt Brecht saying, “Ultimately, I’m the best ambassador of Germany”? In Israel, you don’t have to throw an artist in prison to force them into proximity with the state. You can’t really mark a clear line between the oppressive apparatus and the oppressed mass. It’s the opposite, I think: There’s a kind of disgusting harmony between them. In this sense, Israel is a democratic state. But save us from this democracy.

CA: Your film deals with the central character’s antagonism to Israeli society, but it struck me that it’s also about his feeling of connection to the land itself, the connection to the idea of Israel as a home for the Jewish people.

NL: It goes back to a word that is so overused it’s become kind of empty: identity. On the one hand, it’s totally abstract. And yet it’s very present, concrete. It’s really hard to grasp, but you feel it in all sorts of small, daily gestures. At worst you feel a little bit like Rosemary’s Baby, it’s inside you. Which means that if you think there’s something demonic and devilish or perverted about this identity, then of course the real pervert is you. These demons are not only inside you, you’re part of the demon. So in a way, the film is an act of exorcism. But the problem is that this fantasy of becoming identity-less comes with a fear that nothing will remain of you. You’ll be like a balloon filled with helium.

CA: The movie is largely kind of a battle between the filmmaker and Yahalom. I’m curious how you view the parallels between that storyline and the story Y tells her about an incident during his military service in which—without giving anything away—there’s an open question about whether Y was playing the role of the tormentor or the victim.

NL: I mean, thematically, there’s a clear parallel, in these sick realities that give you only bad choices: You can be the tormentor, you can be the victim, you can be the one who observes from a distance and doesn’t intervene. But there isn’t the option for a kind of healthy normalcy, to be the one who would have said, “Hey, let’s stop. This isn’t a decent thing to do.” In the heart of the movie there’s this duel with this vivid, charismatic, clever, courageous young woman and the only problem is that in order to do the work that she’s so devoted to, she has to collaborate with this evil and oppressive system, making people sign this form, which she knows is immoral. On the other hand there is the filmmaker, who is taking the noble path of resisting, refusing, battling. But you know, it’s like Nietzsche said: “Battle not with monsters, lest ye become a monster, and if you gaze into the abyss, the abyss gazes also into you.” This is exactly this guy, who, from resisting and fighting all the time, treats everyone as an enemy and loses his basic relationship to humanity, his basic empathy. In the process of being so right, he becomes terrible.

CA: My parents are Israeli, and my mom moved back to Israel a few years ago because her father was sick. She thought she might make a go of it there, but in the end she came back to Canada because she couldn’t hack it. There were a variety of reasons, it was too expensive for one, but also, as she would tell me, you get on the bus and you feel a kind of hatred just hanging there in the air, and she couldn’t really handle it. I wonder how you feel about life in Israel, what it means to live with those kinds of feelings.

NL: I live in Paris now.

CA: It’s one thing to have Israelis like my parents as your audience, who have this tortured relationship to Israel, but I wonder about the response that you get from Israelis who haven’t asked themselves some of these questions about complicity or the psychic toll of the occupation. Are you able to reach them?

NL: Unfortunately, especially in this age of greater sociological divisions, people can easily avoid works of art that they disagree with, or that they feel they might disagree with. With all this talk about trigger warnings, people should consider that movies are also made to shift disagreement and contradictions onto a different plane—a plane of colors, movement, faces.

If you take out the conflictual dimension, you reduce the power of the movie to function as a kind of declaration of war, as a provocation, which I think is one of the vocations of art. With Ahed’s Knee, the movie was extremely talked-about in Israel, particularly because of the Cannes award, but a lot of people voiced negative opinions about the movie without watching it. In a way, I think they prefer it this way. All sorts of important figures in Israel called to boycott the movie or to boycott me. But they never watched the movie, and I think it’s a pity, because I don’t think of what I’m doing as making “left-wing” movies. The movies are supposed to create conflicts and confusion in the mind of the spectators, whether they’re from the left or the right. And that’s more or less what’s been happening. Sometimes people totally agree with the ideas of the movie, but still feel terrible fury after watching it.

CA: You basically end the film with Y being confronted with his own awfulness. Though you could say he’s being righteous in threatening to expose her hypocrisy, he’s reduced to tears by a confrontation with exactly what he’s been doing to another person. In that sense, though the movie represents a lot of polemics, I don’t know that it is a polemic.

NL: I agree, and in this sense I think, strangely, it’s my most, I don’t know if I’d say optimistic, but let’s say humanistic movie. While Synonyms ends with with someone throwing himself against a closed door, this movie ends with a hand caressing a person’s face. So in a way, there’s this option—of course, it’s not the solution, but there’s at least an option—for this most basic and fundamental human contact, as an avenue, despite all the contradictions, to small moments of redemption.

CA: Do you think you’d like to make movies that aren’t about Israel?

NL: I guess in the end, I only know how to sing one song. But let’s just say that now that it’s become a kind of terrible scream, I’d like to try to sing it maybe a little bit differently.

Corey Atad is a freelance writer based in Toronto. He has written for publications such as Esquire, Slate, Hazlitt, and The Baffler.