In Nadav Lapid’s new film, Synonyms, a young Israeli attempts to outrun his own Israeliness. 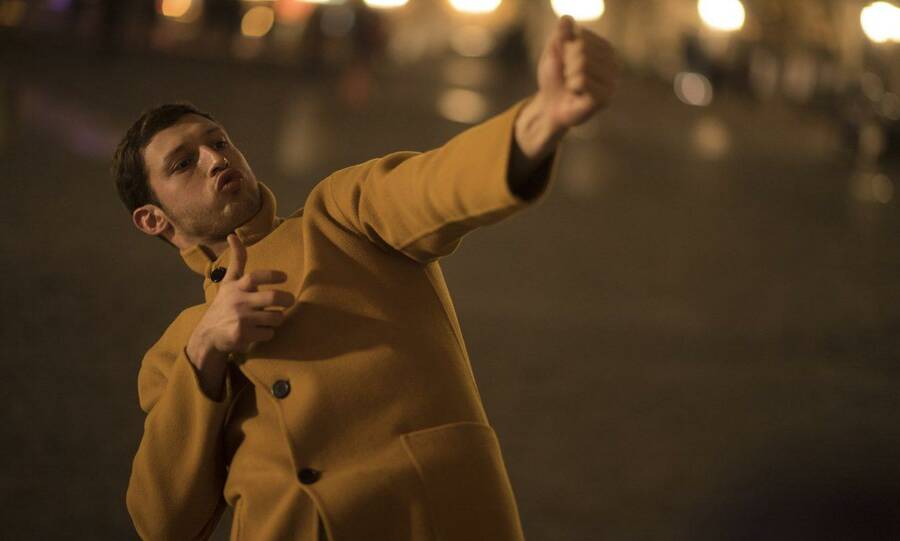 ON HIS FIRST MORNING in Paris, Yoav—a young Israeli—emerges from a shower only to discover that all of his belongings have been stolen from the huge, vacant apartment he’s been loaned for his first night in the city. He grunts in inarticulate rage and, after taking another shower, falls asleep in the bathtub. He is nude, cleansed, stripped of all his possessions: he’s been reborn into a new life. This is, in fact, exactly why he’s in Paris, for he has decided to jettison Israel, his Israeli past, and even the Hebrew language.

So begins Synonyms, winner of the Golden Bear at the Berlinale, directed by Nadav Lapid, best known for his 2014 film The Kindergarten Teacher (more widely available in the US in its English-language Netflix version, released last year). Synonyms is a largely autobiographical film, Lapid himself having left Israel for France, where he lived for two-and-a-half years. Like Lapid, Yoav has abandoned the nation where he was born and raised out of disgust with his homeland. His hatred of Israel is boundless. Shortly after his arrival he goes into a bookstore, purchases a dictionary, and looks up the French words for “sordid,” “repugnant,” “fetid,” “ignorant,” and “mean-spirited,” along with many other derisive adjectives—all so he can apply them to Israel. Former judoka and dancer Tom Mercier plays Yoav with total commitment, rendering even the character’s most extreme sentiments unsettlingly believable. The intensity of Mercier’s performance is further heightened by Lapid’s use of a constantly moving handheld camera, which gives the film a frenetic feel.

Looking for work, Yoav meets some Israelis who run a security company, with whom he refuses to speak Hebrew. When his father, who follows him to France to attempt to haul him back home, warns him that losing his language means losing his past, he is unconcerned: Didn’t his family lose their Yiddish when they immigrated to Palestine from Lithuania? Who is any Israeli to condemn him for casting aside his native language in the name of a fresh start? Isn’t that the very basis of Israel’s linguistic being?

Having divested himself of his Israeliness, Yoav settles into his new home, though not in the manner one might expect. Lapid has said that he discovered the cinema during his time in Paris, but Yoav never goes to see films, nor does he visit museums or any other Parisian attractions. Instead, he spends most of his time with the strange young couple who live in his building, who rescued him on his first morning by providing him replacement clothing, money, and lodging. Both members of the couple—Emile and Caroline, played with startling erotic ambiguity by Quentin Dolmaire and Louise Chevillote—fall in love with the strange interloper. Most of the little time Yoav spends apart from them he spends alone, in cafés, or making himself the same cheap pasta dinner, or with the Israelis he meets at the security company, who mostly cannot fathom what Yoav is up to.

Yoav finds in his France—“the France of legend,” as Lapid has called it in interviews, one that exists in Yoav’s imagination—the antithesis of Israel. In this mythical France, all that is despised in Israel is worshiped, and vice versa. In the integration class Yoav attends to prepare him for French life, the teacher tells the students that if they remember only one date in French history, it should be 1905, when the separation of church and state was established. No religion is recognized by the French Republic, she tells them, none receives funding from the government, and moreover, no one discusses their religion. “Secularism, secularism, secularism,” she intones. The difference between France and Israel—a country held hostage to religious zealotry—could not be more stark.

Yet there is a worm in the French apple that calls this distance into question. Members of the class are told to read the lyrics to “La Marseillaise” while the music plays, and Yoav’s recitation of the anthem, particularly the immortal chorus, serves as a reminder of the martial heart of both countries’ nationhood: “Let us march, let us march, may impure blood flow in our furrows.” Purity of blood might seem alien to the universal values France claims to embody, but there it is, sung out loud and with pride. Lapid seems to be asking: Is the French nation—the real one—really that far from bellicose Israel?

Though Yoav attempts to leave all that is Israeli behind, confident that, as he says at one point, “Israel will die before I do,” the company he continues to keep demonstrates the futility of his quest. Yoram, another young Israeli tough in Paris who is fiercely and belligerently proud of being Israeli—Yoav sarcastically introduces him to his security colleagues as someone who “came to save the Jews”—loves to confront and provoke the average Frenchman on the street with his Israeliness. Yoav accompanies his friend on a trip on the metro, where Yoram dons a yarmulke and hums “Hatikva” in passengers’ faces in a failed effort to get a rise out of them. Though Yoav doesn’t participate in these shenanigans, he also does nothing to stop them. For all of the hatred he expresses for his homeland, Yoav remains Israeli in the very core of his being. A barely repressed violence lurks within him—as do significant anger and pride in isolation—that makes him essentially a synecdoche for Israel.

Yoav is constantly on a knife edge between madness and sanity. In a manic state, he takes it on himself to open the barriers to the Israeli embassy so the line of people—potential immigrants to Israel?—huddled in the rain can enter, shouting “there are no borders!” Near the end of the film, when Yoav, all but driven insane by his struggles to survive in France, attacks a neighborhood orchestra in which his French lover and now-wife Caroline—whom he marries in the hope of being granted residency status—plays, shouting his mockery of the French values, like the equality of the sexes, that he’s been learning about in the integration class. In the film’s final scene, he batters against the door of Caroline and Emile’s apartment, attempting to gain admission one last time. “They’re sending me back to a country whose fate is sealed!” he screams. Yoav’s quest has been to evade that sealed fate. What makes him most Israeli—native to a country that remains mired in the conflict of its founding—is his inability to do so.