Though the JDA improves upon the IHRA definition of antisemitism, it falters in preserving a link between antisemitism and speech about Israel/Palestine. 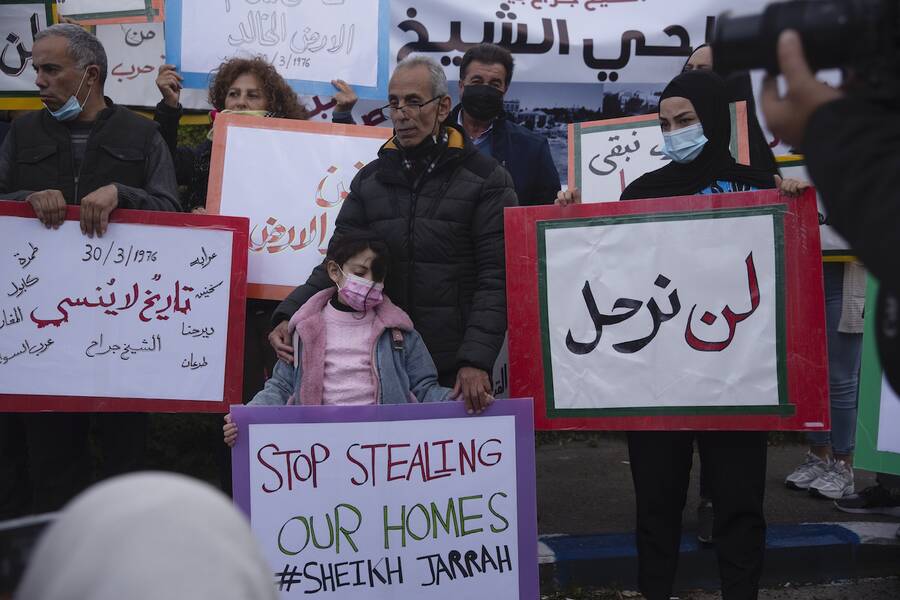 A protest in the Sheikh Jarrah district of Jerusalem, where Palestinians are under threat of eviction from their homes, March 30th, 2021. Photo: Maya Alleruzzo/AP Photo
Tweet Copy Link Email Print

LAST MONTH, an international group of scholars released the Jerusalem Declaration on Antisemitism (JDA), a proposal meant to challenge the International Holocaust Remembrance Alliance (IHRA) “working definition” of antisemitism, which conflates certain criticisms of Israel and Zionism with anti-Jewish discrimination. The JDA, which has been endorsed by more than 200 scholars, offers a definition of antisemitism that recognizes the importance of protecting advocates for Palestinian human rights from accusations of antisemitism when criticizing Israel. Pushing back on the IHRA definition is an urgent task, given that it continues to be adopted by Western governments, universities, and cultural institutions, and is actively used to stifle pro-Palestinian activism. But while the JDA represents a significant improvement over the IHRA definition—for instance, in its explicit recognition of the legitimacy of the Palestinian Boycott, Divestment, and Sanctions (BDS) movement, which critics often accuse of antisemitism—the proposal remains problematic in ways that should be of great concern to those engaged in both the fight against antisemitism and the struggle for Palestinian freedom.

The central flaw of the JDA is that it accepts the premise of the IHRA definition that there is any direct relationship between antisemitism and speech about Israel/Palestine. As Barry Trachtenberg, one of the signatories of the JDA, acknowledged in a piece for this magazine, the “heavy focus on Israel has raised legitimate concerns that the JDA inadvertently reinforces the false association of criticism of Israel or Zionism with antisemitism.” Though I understand the reasons why the authors of the JDA chose to focus explicitly on the contested terrain of speech about Israel/Palestine, I believe the risks of this approach outweigh the benefits. To truly undermine the IHRA definition, the JDA could have reframed the definition away from Israel/Palestine, and instead focused on white supremacy and other well-established sources of anti-Jewish racism and violence. Such a definition would be entirely capable of determining why a given statement about Jews might be antisemitic, without putting people, particularly Palestinians, in the position of having to defend why a statement about Israel/Palestine is not antisemitic—a dangerous position in which victims of oppression are treated like perpetrators. But in framing the definition around Israel/Palestine, the authors, whatever their intentions may be, have kept the door open for bad-faith actors to police what acceptable speech on Israel/Palestine looks like.

Trachtenberg argues that by focusing on speech about Israel/Palestine, the JDA “opens up space for Palestinians to speak about their oppression and to confront their oppressors.” But the document still leaves a significant window of opportunity for those who would strategically conflate Palestine advocacy with antisemitism. The most concerning part of the JDA is Point 10 of Section B, which includes this example of antisemitism: “Denying the right of Jews in the State of Israel to exist and flourish, collectively and individually, as Jews, in accordance with the principle of equality.” This is likely intended to replace a more restrictive example of antisemitism given by the IHRA definition—“Denying the Jewish people their right to self-determination”—which is often taken to mean that opposition to the existence of a Jewish state is antisemitic. Yet the vagueness of the JDA’s language still risks silencing criticism of Israel. After all, what exactly does “exist and flourish” mean?

The definition discusses Jewish flourishing without any acknowledgment that since the inception of Israel until the present day, this flourishing is tied to privileges that stem from our dispossession and military occupation, and the denial of our collective freedom and right of return—that is, our right to exist and flourish. It cites “the principle of equality” while ignoring the fact that Israel has, since its founding, dominated Palestinians in ways that reject this principle. The JDA thus falters by attempting to classify certain kinds of speech about Israel/Palestine as antisemitic without situating its claims in the historical or contemporary experience of Palestinians. What exactly does “in accordance with the principle of equality” mean in the context of settler-colonialism and apartheid? In the context of a state that was built and thrives on violence, exclusion, and deep inequality?

The more one reflects on the JDA’s language, the more questions it raises: Might some interpret the JDA as legitimating Israel’s nation-state law? What about Israel’s Law of Return—which guarantees Jews the right to emigrate to Israel and attain citizenship? Does this extend to Israel’s “lone soldiers”—Jews who do not normally reside in Israel, but serve in the military—or to settlers, who claim the right to establish and expand settlements by virtue of being Jewish? Does the JDA refer to a hypothetical future state or states where all Israelis and Palestinians live in accordance with the principle of equality? Or does it refer to the status quo, in which any Jewish person from anywhere in the world has the right to exist and flourish at the expense of indigenous Palestinians who are denied those very same rights?

To speak about Israel in terms of rights and privileges without recognizing the violence inflicted on Palestinians by Israel is itself a form of exclusion—an exclusion also reflected in the JDA’s title. Trachtenberg explains that the name references Jerusalem because it is where the group behind the document intended to convene before the pandemic disrupted their plans. But as he acknowledges, the use of the title for a proposal outlining a definition of antisemitism “has signaled to some that it reinforces Zionist claims that the city is an increasingly Jewish space.” Indeed, this use of the city in a document focused exclusively on anti-Jewish discrimination implicitly evokes the ongoing Judaization of Jerusalem, which is part of a longstanding effort to ethnically cleanse Palestinians through various legal and physical forms of discrimination and violence. Trachtenberg argues instead that the name functions “as a refutation of the idea that the city is exclusively Jewish” by “casting Jerusalem as a shared space where well-intentioned people of different perspectives and backgrounds can reach mutual understanding over how to combat systemic hatred.” But for the JDA to really function this way, it would need to explicitly recognize the ubiquitous racism and violence Palestinians face in the city, as the displacement that began in 1948—an injustice that affected my own family—continues to this day.

The JDA’s insistence on functioning as a referendum on speech about Israel/Palestine means it raises essential political questions that it then declines to answer. For instance, the document never defines the boundaries of Israel. Does the JDA conceive of Israel according to the 1947 Partition Plan or the 1967 borders? Does this Israel stretch “from the river to the sea,” meaning that ever-expanding settlements are included within its boundaries? Does the right to exist and flourish include the Palestinian right of return or reparations? I am certain that many of the respected authors and signatories of the JDA regularly reflect on these questions, but would understandably not want to engage with them within the scope of a definition of antisemitism, because they have little if anything to do with anti-Jewish racism. The fact that the language of the declaration can’t be fully understood without answers to these questions shows that the JDA rests on a faulty premise.

If the JDA is simply a definition of antisemitism, it could place no restrictions on speech about Israel/Palestine, and would not need to speak to questions of anti-Palestinian discrimination. But in its attempt to define antisemitism in terms of Israel/Palestine without addressing discrimination against Palestinians, it raises far more questions than it answers: What does “in accordance with the principle of equality” mean in the context of a state that was built and thrives on deep inequality and exclusion? Must we accept anyone’s right to flourish within a nation, when the ability to flourish is tied to the domination of others? Shouldn’t we condition the right to flourish on the principle of radical equality for everyone? By focusing on Israel/Palestine, the JDA cannot avoid becoming a statement about racism and exclusion in Israel/Palestine—one that ignores the experiences of Palestinians and fails to confront the history or present reality of Israel. I encourage the authors and signatories of the JDA to listen to Palestinians’ criticisms of the document—from those offered by the BDS movement to my own—as they work to bring much-needed clarity to the muddled discourse around antisemitism, so that we can together continue to fight against racism in all forms and for Palestinian equality, freedom, and return.

Samer Abdelnour is an academic and activist. He co-founded Al-Shabaka, The Palestinian Policy Network, and occasionally writes and speaks on Palestine.

Opinion
Why I Signed the Jerusalem Declaration on Antisemitism
Despite my worry that any definition of antisemitism reinforces beliefs in Jewish exceptionalism, the flawed and widely adopted IHRA definition needs outright replacement.
Barry Trachtenberg
Opinion
Why I’m Traveling to Alabama
Unions built our country. Now, we need to build them.
Jamaal Bowman