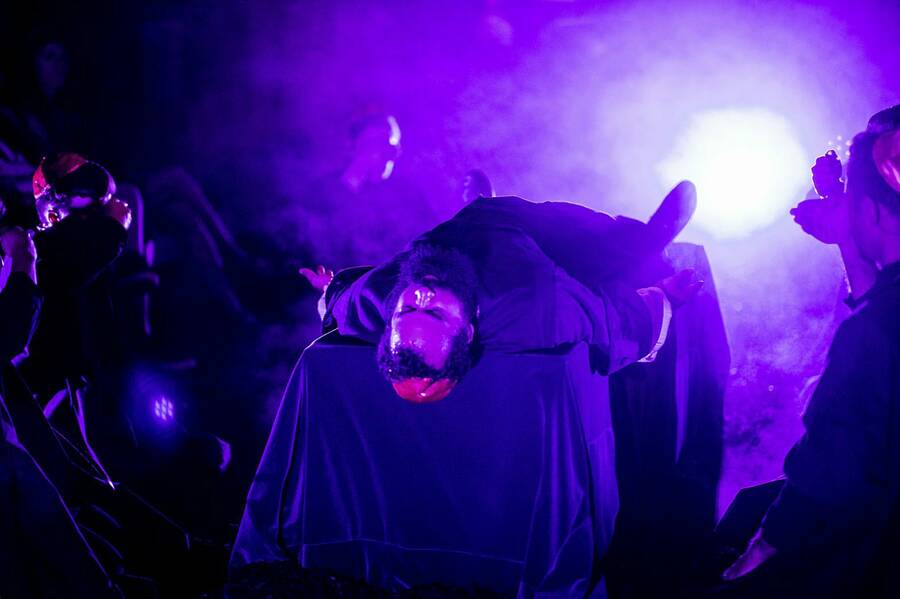 theatre dybbuk, led by artistic director Aaron Henne, explores the rich world of Jewish folklore, rituals, and history, building lyrical performances that illuminate the human experience. The group’s latest work, conceived in collaboration with Erith Jaffe-Berg, Professor of Theatre at the University of California, Riverside, is hell prepared, which theatre dybbuk describes as “a ritual exorcism inspired by Kabbalistic principles, performed within a dominant cultural context.”

The performance, which premiered this summer at the Philosophical Research Society in Los Angeles, was inspired by the 17th-century narrative poem Tofteh Arukh, written by the rabbi and Kabbalist Moses Zacuto in the Jewish ghettos of Venice and Mantua in what is now Northern Italy, and depicting a descent into Hell from a Jewish perspective. The piece features a landscape of choreographed movement, poetic text, shadow play, and choral scoring, following a spiritual leader as he attempts to exorcise the dominant culture and its influence on his world.

I spoke with Aaron Henne and Erith Jaffe-Berg about the process of adapting this complicated source text and the ways it speaks to our contemporary context.

Leora Blum: How did your collaboration on this project come about?

Erith Jaffe-Berg: This project came to me in an unexpected way. At an academic conference put on by the Renaissance Society of America, I went to a session that included Michela Andreatta, whose work I didn't know at the time. Among her incredible scholarly works was her translation—into Italian, from Hebrew—of this esoteric text called Tofteh Arukh, by a rabbi named Moses Zacuto, which was new to me. Through Michela’s translation, I went back to the original, which is written in a very dense, almost jungle-like Hebrew. Very hard to make sense of—and very rich. It’s very onomatopoeic, really relying on the sounds and physicality of words. It came crashing down on me. It was like an explosion.

Aaron Henne: As I learned from Erith and Michela, we don't know exactly when Zacuto wrote this text, but it was likely later in his life, when he lived mostly in Mantua. And in the Jewish ghettos there were what are called “confraternities,” which were groups of men who would gather late at night or early in the morning to study, to perform Kabbalistic rituals, to pray, and to contemplate. During this time, there was a proliferation of new liturgy and new poetry being written for these groups to work with. Tofteh Arukh was part of that, probably originally intended to help members of these groups to contemplate death from a Kabbalistic perspective.

EJB: I wanted to invite Michela to give a talk at UC Riverside. And I knew that if it wasn’t just a scholarly talk—if it also had a theatrical element—the audience would be better able to appreciate this text for what it was. Zacuto’s life had spanned the circuitous journeys taken by many Jews at the time. In 1492, his ancestors were expelled from Spain to Portugal, where they lived as conversos, secretly carrying on many of the Jewish traditions while outwardly converting to Catholicism. Then his family migrated to Amsterdam, where he was born around 1625. He wanted to study Kabbalah, so he ended up in Poland for a time. On his quest to reach Palestine, he got marooned in Italy, eventually settling in the town of Mantova. I thought, well, he was living in all these languages—Ladino, Spanish, Portuguese, Dutch, Italian, Hebrew. So I got involved with the Latino Play Project on our campus, working with two students from that group, Irais Cardenas and Estefania Garcia, who helped me to explore the Ladino and Spanish roots that were undergirding the Hebrew text. We created this theatrical retranslation of the monolingual Hebrew text into a multilingual text that fused Spanish and Hebrew and English and Italian, and we performed a very short concert reading of this before Michela’s lecture. That was the first time I realized this might be a great bridge to theatre dybbuk.

LB: Aaron, what attracted you to Tofteh Arukhas a source text for theatre dybbuk? And what was the process of adapting it for the theatre?

AH: Tofteh Arukh is what we might call a descent into Gehenna—this Jewish, hellish, afterworld space. It’s obviously in conversation with Dante’s Inferno, written a few hundred years previously, which dealt with nine circles of Hell and was this major text in the dominant cultural context. So when Erith brought this to me, that artist’s voice in me said, right away: “Jewish descent into Hell, fantastic!”

I’ve been really interested in questions of cultural dominance, subjugation, and exchange—questions of assimilation, integration, and the resulting conflicts. And I thought: this clearly touches on these points. You have a people living in a ghetto within a larger community—we often think of ghettos as being closed off, but in fact there’s a ton of cultural exchange going on. And you have this rabbi, Zacuto, trying to write the definitive Kabbalistic vision of the afterworld—a specifically Jewish vision—but he can’t help but pull from and respond to the dominant Christian narrative about that.

One other thing I’ll add into the mix is that we discovered fairly late in the research that Zacuto was not only an accomplished mystic and rabbi, but he was also essentially the Jewish exorcist of Venice. While Tofteh Arukh is a complicated, beautiful text, it’s not inherently dramatic. Its emotional landscape is fairly static—which makes sense, given that it was originally intended for contemplation. What I discovered was that, if we wanted to look at these questions of cultural exchange and dominance and subjugation provoked by the text, we had to largely abandon the source text. Thinking of Zacuto as an exorcist became our entry point for thinking about how this new theatrical work would operate. What does an exorcist do? He tries to rid a patient of something that is invading them. He tries to free them, to heal them of their ailment.

EJB: Knowing that, he becomes a more complicated personality, and that opens the door to thinking of him as a dramatic subject.

LB: It seems some of the drama in the text also comes from the particular upheavals of the time period.

AH: Exactly. Zacuto was likely in a moment of great spiritual crisis when performing these exorcisms and writing this text: Many Jews, Zacuto possibly included, believed that a man named Shabbetai Tzvi was the messiah and that, after years of Inquisition, of being killed, of living in uncertainty, of being taxed above other members of society, the time was coming when they’d be free of their marginalized position. But then Shabbetai Tzvi converted to Islam and was revealed as a “false messiah.”

EJB: We can only imagine the disappointment—disappointment seems like too trite a word . . . the heart crush of it, the devastation of the failed Shabbetai Tzvi promise. And Zacuto experienced that. It was, too, a period of broader unease, occasioned by the conflicts the European powers had at the time. Zacuto was born in Amsterdam, which, in the mid-1600s, had all of these waves of migrants coming over from England, because of the civil wars there. And from the north, there are Jewish communities coming south seeking refuge in places like Amsterdam, Northern Italy, Venice, Mantua—in addition to earlier waves of Jews coming from the Iberian Peninsula, seeking asylum and refuge. So this was a really volatile period, from so many different angles, within the Jewish community. People were asking questions about who to follow, who to listen to, what to hope for, the meaning of all this unrest and suffering.

AH: Once I came to understand from my learning with Erith and Michela that society was in an active period of asking these questions, I thought that perhaps Zacuto could be a character attempting to provide that meaning. As you taught me, Erith, one of the apocryphal, legendary narratives about Zacuto is that, in order to rid himself of the dominant culture, he fasted for 40 days in an attempt to unlearn Latin. Somehow purging himself of food, he believed, would allow him to purge himself of the dominant cultural context. I thought: what if this theatrical work is a ritual exorcism? What if it’s Zacuto attempting to remove the dominant cultural context from his community—and by extension, from himself?

The piece then comes to ask this bigger question: Can you rid yourself of something without destroying that which is at your core? Because of course, if you go back in Jewish history—or any history—exchange is always happening, and questions of dominance and subjugation are always present. We’re looking at this in our moment today: where are we permeable, and where are we keeping our boundaries?

LB: What about those boundaries as they manifest within theatre dybbuk? How does theatre dybbuk position itself in relationship to Jewish and non-Jewish content and collaboration?

AH: When people hear that theatre dybbuk does work from a Jewish perspective, they often assume, understandably, that everyone involved is Jewish, and that it’s for a Jewish audience. But that’s not the case. What we are attempting to do is to utilize Jewish thought, Jewish history, Jewish texts, to look at our society at large. And how can we do that unless we are engaging with people from a variety of backgrounds? We’re taking something fundamentally Jewish, and then surrounding it with conversation and commentary that comes from a variety of perspectives. I often say to people that we are most successful with our theatrical work when half of the audience, if not more, is not Jewish, so that we are not having a conversation by and for Jews—looking at questions of Jewish continuity, for instance, or how we continue as an independent people. We are saying we are in this society, intersecting, integrated—both privileged and not—and saying, let us have a conversation that includes the larger patchwork of which we are a part.

Leora Blum is a writer and illustrator.