The Dangers of a “New Cold War” with Russia

A conversation with the historian and foreign policy expert Stephen Wertheim. 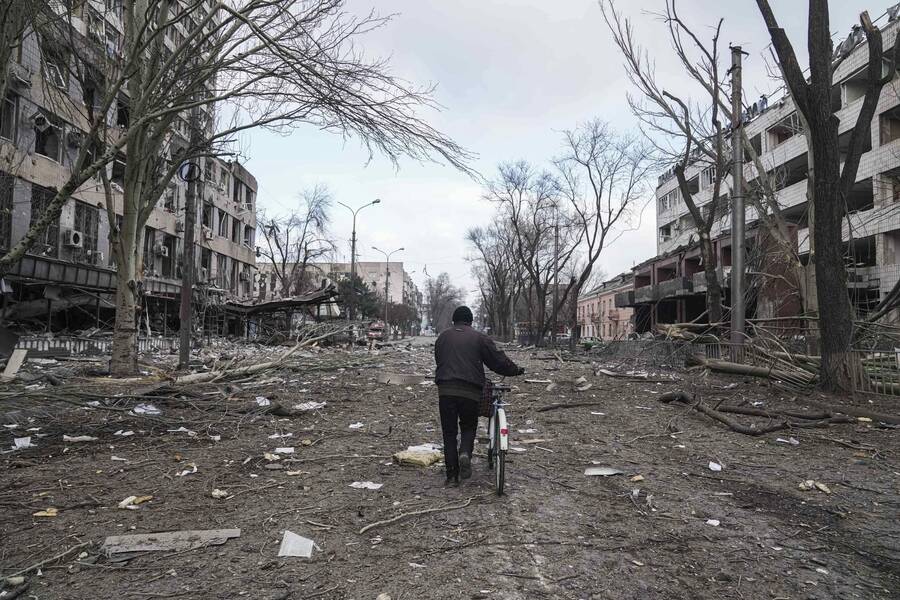 A man walks with a bicycle down a street damaged by Russian shelling in Mariupol, Ukraine, March 10th, 2022.

One month into the war in Ukraine, it’s clear that the conflict’s geopolitical ramifications will be wide-ranging, and many are warning of a revived cold war between the United States and Russia—a prospect that some analysts and authors were raising even before last month. But historical analogies are never exact, and there are many important distinctions to be drawn between the Cold War and the present confrontation, not all of which are reassuring.

For this week’s newsletter (subscribe here), I called up Stephen Wertheim, who is a senior fellow in the American Statecraft Program at the Carnegie Endowment for International Peace, the author of Tomorrow the World: The Growth of U.S. Global Supremacy, and a leading critic of interventionist foreign policy. We discussed how today’s situation compares to the Cold War, and the various unsettling scenarios that might play out. Our conversation has been condensed and edited.

David Klion: How appropriate is the term “new cold war” to describe the current geopolitical standoff surrounding the war in Ukraine?

Stephen Wertheim: I think the Cold War is a pretty poor metaphor if it’s meant to draw similarities between then and now. It’s more powerful if it’s used to raise a warning about where we may be heading: toward a state of permanent and open-ended hostility, where no meaningful diplomacy can take place and outstanding differences can’t be resolved. If you look at a map of which countries worldwide have imposed these sanctions on Russia, it’s quite similar to a map of the so-called free world that sought to contain the Soviet bloc.

That said, those of us who warned against a cold war prior to Russia’s full-scale invasion of Ukraine now find ourselves in a very different position. Now that Russia has committed this act of aggression, one that warrants significant punishment by the West, any near-term prospect of decent relations between the US and Russia is gone. The West will undertake a serious effort to counterbalance Russian military and economic power for some time. So although the value of warning against a new cold war is minimal, there are still productive questions to ask about what the US should be doing relative to Europe, and to what extent countering Russia should be one of the foremost priorities of US foreign policy.

DK: Where do you come down on that? What priorities do you see as competing with this renewed focus on containing Russia?

SW: I think there’s a clear effort underway in Washington to seize on the war in Ukraine in order to make the case that the US should continue to be the indispensable nation. Before, the Biden administration had been trying to prioritize security in Asia and the prosperity and well-being of the American middle class, but now the administration may be tempted to add to those goals a more intensive mission to contain Russia.

DK: And those missions are possibly contradictory, right? There’s a very plausible argument that we’re delivering Russia into China’s hands, that Western sanctions are encouraging a much closer relationship between these two powers, as opposed to pitting them against each other.

SW: Yes. This is one reason why some people in Washington are concerned about imposing such severe sanctions on Russia—for example, by freezing the assets of the Russian Central Bank. While serious costs need to be imposed on Russia, the record of broad-based sanctions against other countries doesn’t suggest a high likelihood of changing their behavior. The sanctions are a gamble. And if the sanctions are maintained over the long term, the effect will be to make Russia more dependent on China. Some argue that this shift has already taken place—that Xi Jinping and Vladimir Putin have forged a close relationship, and now the US has to respond to that reality. I think that’s somewhat misguided; China’s still trying to work out exactly what its position will be, and China does have a significant economic interest in remaining engaged with the US and the West more broadly. So I don’t think it makes sense to just resign ourselves to a lockstep Sino-Russian alliance for the foreseeable future.

Note that most of the recent discussion of a “new cold war” prior to last month had been in reference to China, not Russia. The United States will not stop viewing China as a major threat and competitor. So now we are potentially facing a very intense security competition against both Russia and China. And as proponents of this vision admit, such a competition would require US defense spending to increase significantly for the indefinite future, and would put US forces on the front lines of two potential great-power wars. Taking that approach would involve much higher costs, and much greater risks, than anything we’ve seen over the past three decades.

Anyway, that’s one of several reasons why, if we get to the point where Ukraine seeks to reach a peace settlement, and one condition is that we lift some of the sanctions on Russia, that would be a difficult thing for the West to do, but also a necessary one. If we don’t tie specific sanctions to actions that Russia could take in order to get them lifted, we don’t have a strategy at all—we just have punishment. That’s what so many people, including members of the Biden administration, have argued against the Trump administration’s “maximum pressure” sanctions on Iran, which was in effect punished for complying with the Obama administration’s nuclear agreement.

DK: How concerned should we be right now about the prospect of nuclear weapons being used?

SW: I’m concerned! It’s hard to know how concerned to be. The situation today is in some ways less predictable than during much of the Cold War, when the two sides came to understand how the other would behave.

What most worries me is the possibility that Putin could come to believe that the survival of his regime is at stake, and that the tools available to him are diminishing. His conventional forces have struggled in Ukraine far more than he seems to have expected. Russia is now being sanctioned, really embargoed, by a good portion of the world, and Europe is trying to wean itself off Russian oil and gas. In that context, if Putin feels that he’s losing the war and that his regime is in danger, one thing he does have is a formidable nuclear weapons stockpile. The US government has conducted war games in which Russia sometimes uses nuclear weapons under such conditions.

I think Putin is still acting according to a certain rationality, even if it’s difficult for us to understand. He knows the difference between a nuclear weapon and a non-nuclear weapon, and between a NATO country and a non-NATO country, for example. But at some point, could he become so desperate that he might want to change the strategic situation in a drastic way that would appear to give him some chance of survival, as opposed to no chance? It is imaginable, not least because Putin has a history of fearing that the West seeks his overthrow.

DK: When we typically think of nuclear weapons, we might imagine that all the world’s major cities just instantly get destroyed. But there has been talk of smaller-yield tactical nuclear weapons designed to be used on the battlefield; Putin might, for instance, try to take out a Ukrainian army column.

SW: Yeah, that’s a more likely prospect. There are nuclear weapons that have a small blast radius, maybe the size of an airport, but which would nevertheless break the taboo against using nuclear weapons. Such an attack might be meant more as a warning than anything else, and it might be less deadly than conventional attacks that are ongoing in Ukraine. It’s an open question what the US response would then be.

DK: Nuclear terror aside, what are the larger risks and implications of a prolonged Cold War-like confrontation between the US and Russia (or the US and China, for that matter)?

SW: A cold war would lock both sides into a security dilemma in which a gain for one seems like a loss for the other. It would stifle meaningful cooperation and diplomacy in areas where leaders on both sides might otherwise think they have an interest in cooperating—for instance, on climate change. And it could have negative effects on our domestic politics, akin to McCarthyism during the original Cold War.

A cold war could also mean dividing the world along economic and cultural lines. Throughout the Cold War, the communist world didn’t do much trade with the “free world.” But over the past three decades, for all the downsides of globalization, most countries’ economic interests have been substantially delinked from their strategic and military interests. So if military competition continues to intensify, another danger is that we might start to see a messy economic decoupling from China that dwarfs the one that has suddenly occurred between the West and Russia. Then the world would start to more closely resemble that of the original Cold War, and the risk of armed conflict would probably increase, because the value of bringing new territory under one’s control would rise.

I wouldn’t have said this a month ago, but there’s now a tail risk of the world dividing into economic blocs. The West has just shown that in a geopolitical contingency, it can cut off a major power like Russia from much of the global financial system. Now other countries have to consider that the same thing might happen to them, or to their major trading partners, under certain circumstances. So they may want to make plans to align economically with certain states, and abandon others, when the chips are down. And preparing for such an eventuality may actually help to bring that eventuality into being, as states become less reliant on certain trading partners and make strategic partnerships with others. The risk, then, is of a global turn not so much toward national autarky as toward international economic blocs, although we still have a long way to go before we get there.

DK: So to sum up: How scared should we be?

SW: I mean, there’s only bad news. It’s difficult for me to see why some people seem to be kind of excited about how the West has come together against a common enemy. This is a tragedy, and Vladimir Putin is mainly responsible for it, but the world that will emerge from this war in Ukraine will be poorer, more divided, and more heavily armed.