New legislation would criminalize the display of the colors of “any enemy state” at public institutions. 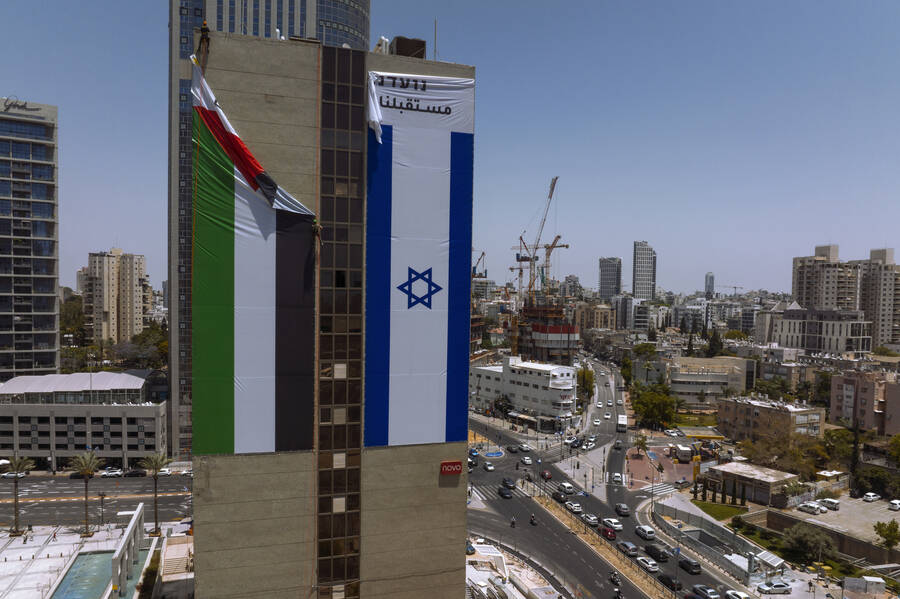 A Palestinian flag is removed from a building by Israeli authorities after being put up by an advocacy group that promotes coexistence between Palestinians and Israelis, in Ramat Gan, Israel, June 1st, 2022.

ON JUNE 1ST, a member of the Likud party introduced a bill in the Israeli Knesset outlawing the display of the Palestinian flag at institutions that receive funds from the Israeli government. It passed an initial vote that day by a wide margin—63 members, most of them right-wingers, voted in favor, while just 16 voted against. Few center-left Knesset members were present for the vote, the first of four before the bill can become law.

According to the text of the bill, at most public institutions, displaying the flag of “any enemy state” would be illegal under the legislation, though only the Palestinian flag is specifically mentioned. “Flying such flags will be considered an illegal gathering that will be dealt with like a riot that can be dispersed,” the bill reads. “The state of Israel, as a democracy, allows its citizens to protest against issues where they disagree with the authorities. However, this bill draws a red line between legitimate protest and protests during which flags are flown of those who do not recognize the state of Israel or pose a threat to its existence at state-funded bodies.”

Though the bill’s chances of becoming law are unclear, its introduction is part and parcel of Israel’s wider effort to more fully embed Jewish supremacy in its legal codes: In 2018, for example, the Knesset passed a quasi-constitutional law, known as the Nation-State Law, which formally classifies the right to “self-determination” as the sole province of Israeli Jews. The bill to ban the flag further codifies the repression of Palestinian national identity. “This is another manifestation of Israel not being a state for all its citizens, even by law,” Dana El Kurd, a political scientist at the University of Richmond, told Jewish Currents. “I wouldn’t say Israel is slipping further into fascism. But it’s revealing its fascism more clearly.”

The flying of the Palestinian flag has frequently been under some form of official sanction in Israel. In the first days of Israel’s 1967 occupation of Gaza and the West Bank, Israel criminalized displays of the flag or its colors. A 1981 military order forbade artists under occupation from rendering any amalgam of red, black, white, and green in their works. The Palestinian painter Nabil Anani recalled being told by an Israeli intelligence official that he could not portray even “a flower with the different petals showing each color of the flag.” In 2001, the Israeli Attorney General’s office argued that waving the Palestinian flag could be illegal if “criminal intent” was proven, or if the flag-waver identified “with the [Palestine Liberation Organization] as a terrorist organization.” In the last decade, Israeli lawmakers have tried several times to pass bills curtailing the display of the flag, though none of the efforts succeeded.

This time, the proximate cause of the push to ban the flag was a series of student demonstrations at several universities on Nakba Day, the annual May 15th commemoration of the systematic ethnic cleansing of Palestinians that accompanied and facilitated the establishment of the State of Israel in 1948. About 18% of university students in Israel are Palestinian, roughly tracking with the proportion of Israeli citizens who are Palestinian. During Nakba Day last month, students rallied at Ben-Gurion and Tel Aviv universities, holding picket signs and flags. The demonstrations were met with swift police backlash; some students were detained, and others were beaten. The bill’s author, a Likudnik named Eli Cohen, accused the students of attempting to incite antisemitic violence, and suggested that the Palestinian flag symbolized terrorism. The students’ flag-waving “represents the aspirations of those that want to eliminate the Jewish state,” he said. “Imagine to yourself that in America, they would raise the flag of al-Qaeda, imagine that they would fly [Irish Republican Army] flags in a British hospital . . . it is inconceivable.”

The proposed ban also responds to government instability. For the Israeli right, the current attempt to criminalize the flag could be a strategic political move, as the ruling coalition—a fractious set of Palestinian and Israeli Jewish parties spanning the political spectrum—teeters on the edge of dissolution. “The bill drives a wedge between this very fragile coalition,” said Yousef Munayyer, a political scientist and a contributor to Jewish Currents. He noted that on the Israeli far right, the ruling coalition is seen as too soft on Palestinians. If the bill fails, the right could “rile up a nationalist anger that pushes this government out and bring a solidly right-wing constellation into government.” (A second bill, to maintain the status quo in which Israeli civil law extends to Jewish settlers living illegally in the West Bank, also threatens to fatally destabilize the coalition.)

Even if the bill doesn’t become law, its introduction underscores the dominance of the Jewish-supremacist right. Days before the bill was introduced, thousands of Israeli nationalists stormed through occupied East Jerusalem for an annual “Flag March.” Police forces shot Palestinians in the area with rubber-tipped bullets and live rounds, shutting down the city for Jewish demonstrators who yelled “Death to Arabs” and other chants. The march has intensified in recent years along with the legal repression of Palestinians. Ultimately, the dynamic is “making it so that there’s no other trajectory but violence,” El Kurd said. Israel “is not even attempting to extend piecemeal liberal human rights. It’s going the opposite direction.”

This piece has been updated.

Newsletter
Balancing the Scales
How much did AIPAC affect a close Democratic primary in Texas?
Isaac Scher
Report
Progressive Lawmakers Demand Stop to Israeli “War Crime” in Masafer Yatta
In a letter to the Secretary of State, 15 House Democrats urged the administration to intervene against the expulsion of Palestinians from West Bank villages.
Isaac Scher
Sign up for our email newsletter, featuring exclusive original content
Want original reporting and analysis on Israel/Palestine?
Sign up for the Tuesday News Bulletin.