The End of Nonviolent Resistance

The recent wave of Palestinian attacks on Israelis come as other options have been delegitimized. 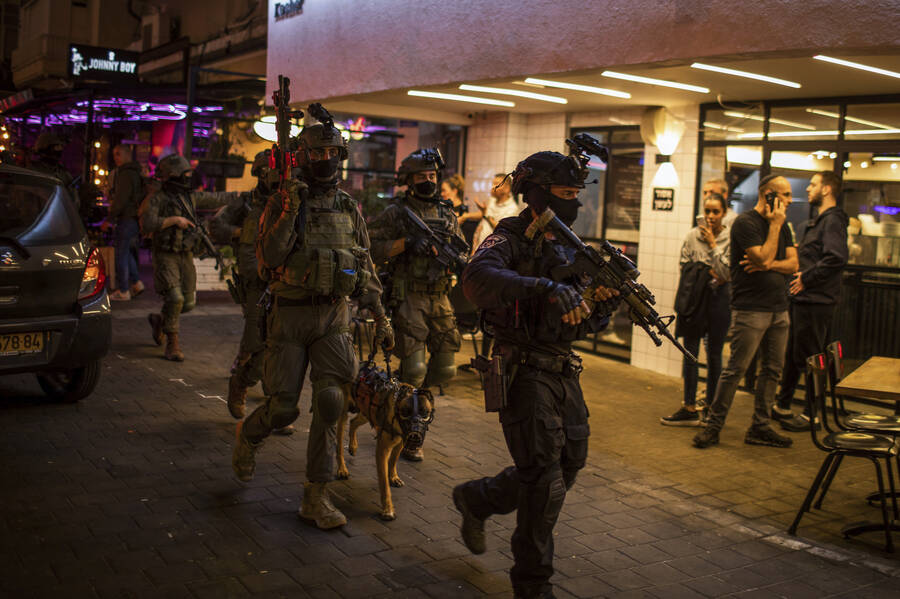 SINCE MARCH 22ND, five Palestinian assailants have killed 14 people in Israel in four separate attacks. Two of the attackers lived in the West Bank, the other three in Israel. The Islamic State, or ISIS, claimed responsibility for one of the attacks; the attacker in a separate incident was affiliated with the group. A member of Islamic Jihad, a militant group in the West Bank, carried out the most recent attack, in Tel Aviv. “The city shut down when he was on the loose,” Dahlia Scheindlin, a political scientist and a member of the Jewish Currents advisory board, said. “Thursday is usually a party night, but the city was totally empty. It was swarming with officers, helicopters, and cop cars in all directions.” The next morning, the attacker was found and killed.

Israel’s retributive violence has been swift. Since the first of the four attacks, the Israeli government has allocated $56 million to Israeli police in “emergency” funds and $112 million to construct a new stretch of separation wall dividing the West Bank from Israel. According to Defense Minister Benny Gantz, the military has arrested 200 people and could arrest “thousands” more. Military raids in the West Bank continue at a record-high clip. When Israeli settlers threw stones at residents of the Palestinian town of Tuba and destroyed some of their property last week, Israeli authorities instead arrested a Palestinian resident, who they charged with throwing stones, fined, and temporarily banned from the town.

On April 10th, the Israeli military killed four Palestinians. One was a woman near Bethlehem who was shot while crossing the street; the military claimed she had approached soldiers in a “suspicious manner.” Another woman was killed after stabbing a Border Police officer in Hebron. A man from Hebron, protesting southwest of Bethlehem, was killed for hurling a firebomb at a motorist on a Jews-only road that connects Jerusalem to an Israeli settlement. The same day, a 17-year-old Palestinian boy from Jenin shot at soldiers from his motorbike. A soldier shot back with expanding bullets, which balloon on impact and are prohibited by international law. The boy was hit and hospitalized; he died the next day. A second Palestinian boy, 16, died the same day after being shot while “looking on the ground for stones” to throw at Israeli soldiers, according to the human rights group Defense for Children International–Palestine. “It’s all escalation,” Scheindlin said. “This is a tit-for-tat conflict. When people are dying, you have anger and revenge. That’s the cycle.”

Palestinian violence is a reaction to the “incessant pressure on Palestinians from so many different sources,” Khaled Elgindy, director of the Middle East Institute’s program on Palestine and Israeli–Palestinian affairs, told Jewish Currents. Among the sources of pressure, he said, are military operations and settler raids in the West Bank and regular internal displacement. Further, Palestinians find little political representation in the Palestinian Authority or Hamas—or in once-allied states in the Middle East, several of which attended the recent Negev Summit cementing “normalized” relations with Israel. “Asymmetry is driving the conflict. One side can impose its will, and the other cannot,” Elgindy said.

Israel, for its part, cites security as the prime motivation for its responses to Palestinian violence. When Raad Hazem shot and killed two people at a bar in Tel Aviv on April 7th, the Israeli government sanctioned Jenin, where Hazem lived. The city of 40,000 is now almost totally locked down during the holy month of Ramadan. Residents with jobs in Israel will be allowed to travel to and from Jenin for their shifts, but Israel has revoked the travel permits of 5,000 residents, preventing them from crossing the Green Line. Palestinian citizens of Israel have also been barred from visiting the city, as they frequently do. The al-Aqsa Martyrs’ Brigade, an armed group affiliated with the governing Fatah party, reportedly deployed militants to Jenin the day after Israel leveled sanctions on the city. Locals are barricading the city in advance of a possible military operation, according to social media reports. Akram Rajoub, the governor of the Jenin district, described the sanctions as collective punishment. “Israel takes security measures against the Palestinians every day, including harming innocents, and there’s no judge and no justice,” he told Haaretz. “Instead of creating deterrence, it will cause escalation.”

As violence escalates, Elgindy points out that Israel, in its quest for control, has delegitimized nonviolent resistance by Palestinians. Israeli leaders have long vilified the nonviolent Boycott, Divestment, Sanctions (BDS) movement as antisemitic, for example, and Israeli soldiers have regularly shot and killed unarmed protesters at weekly events in the West Bank and Gaza. Last year, the Israeli government officially designated six Palestinian human rights groups as “terrorist organizations.” This limiting of dissent, Elgindy said, has lessened “​​the costs of engaging in violence” in the eyes of many Palestinians.

Young Palestinians, in particular, have turned away from nonviolence, Dana El Kurd, a political scientist at the University of Richmond, told Jewish Currents. “After the Second Intifada, there were a number of attempts to create nonviolent mobilization around a number of issues. All of those fizzled out,” she said. Simultaneously, “the Palestinian territories experienced worsening conditions and less of an ability to coherently face them,” both at the level of grassroots activism and, given the corruption of the Palestinian Authority, that of electoral politics. Although last year’s Palestinian uprising against Israel, known as the Unity Intifada, briefly appeared to revive mass mobilizations, it was “not as sustained as people wanted,” El Kurd said, increasing the perception that strategies of nonviolence “are complete dead ends.” Even before the Unity Intifada, according to El Kurd’s polling research, Palestinians in the occupied territories preferred strategic violence to strategic nonviolence. “They’re not Islamists and they’re not pro-Hamas,” she said. “They are often on the left. Ideologically they are very opposed to the groups putting up these attacks. If even the most ideologically opposed people support violence, that says something about the broader society.”