In the UK, Jews and Indians on the left are joining forces against the right’s Islamophobia and bigotry. 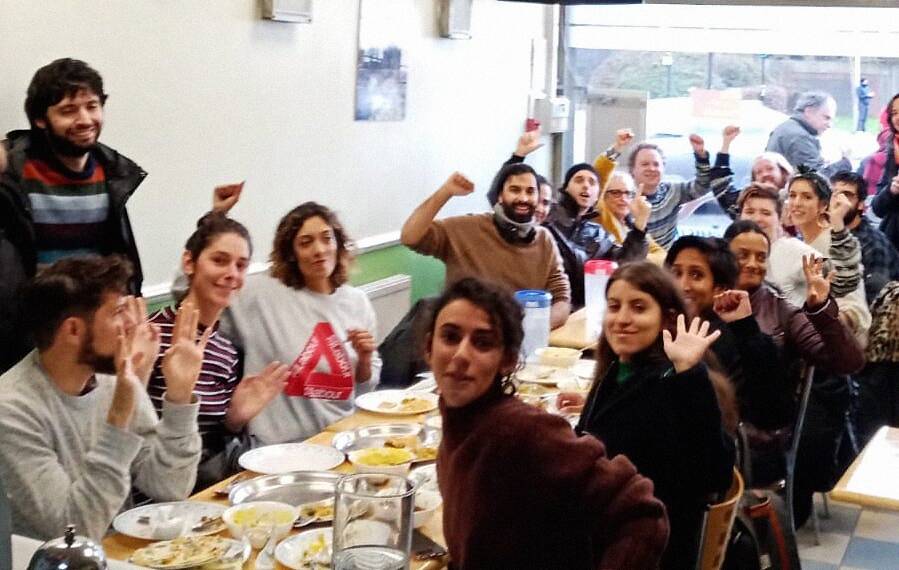 IN NOVEMBER, amid the most divisive British general election in a generation, a group of activists convened at a Shabbat dinner in East London to discuss how we could tackle the challenges facing our communities. The two of us—Ilyas, an Indian Muslim, and Imogen, an Ashkenazi Jew—met there. While the Jews davened, Ilyas performed the evening prayer Isha next door—beside, of all things, a Christmas tree.

This was not, however, a fluffy interfaith event. This was a solidarity gathering of Jews, Muslims, and communities of color campaigning against the Conservative Party’s insidious links to the far right. Hosted by the newly formed group Jews Against Boris, whose name refers to the United Kingdom’s vulgar, bigoted Conservative Prime Minister Boris Johnson, the “Solidarity Shabbat” created a space where different minority groups could join in a common struggle.

Jews and Indians on the British left are both dealing with a similar problem: our self-styled communal representatives have been railing against the left—whether as anti-Indian and anti-Hindu or as antisemitic—while implicitly allying themselves with the right. For several years, British political discourse has pinned the UK’s trans-partisan, deeply rooted antisemitism almost entirely on the Labour Party. Last year, the right-wing Jewish Chronicle editorialized that Labour leader Jeremy Corbyn poses an “existential threat” to Jewish life in Britain. While drastically less publicized, the Indian Hindu establishment has accused Labour of being anti-Indian because of its declaration of support for Kashmir at its annual conference and its failure to appoint enough Indian-heritage MPs. Both communities have been urged by their communal leaders not to vote Labour. It’s true that Labour’s leadership has made mistakes in its handling of antisemitism, and has often lacked sensitivity and empathy in its approach to valid concerns. But right now, on the eve of the election, Jews and Indians simply cannot afford to be deterred from organizing on the left.

Under Johnson, the Conservative Party has increasingly promoted hard-right nationalist policies that disproportionately threaten minorities and communities of color. Johnson’s unabashed Islamophobia has helped catalyze a 375% rise in hate crimes against Muslim Women; his government’s callous “hostile environment” policies have targeted migrants and refugees; and black British citizens have been deported. Meanwhile, white supremacy is blossoming: Counter-terror police warned in September that the far-right is the UK’s fastest growing terrorist threat. Such elements in British society are emboldened by the normalization of far-right discourse in the upper echelons of British politics: senior MP Jacob Rees-Mogg, a staunch ally of Johnson, recently referred to two Jewish MPs as members of the Illuminati and accused George Soros of funding the anti-Brexit Remain campaign.

For the past century, the British left has stood alongside minorities in solidarity against antisemitism and racism. At the famous Battle of Cable Street in 1936, socialists, Irish workers, and communists fought with Jews against the fascist (and former Conservative MP) Oswald Mosley, and it was left-wing anti-racist and antifascist organizers who stood with Indians at the Southall Riots in the late 1970s following the rise of the far-right National Front.

The Conservatives, meanwhile, have been engaged in whitewashing their own racist history. Winston Churchill allowed 4 million people to die in India because they were a “beastly people with a beastly religion,” while dismissing the rights of Palestinian Arabs in the 1937 Peel Commission (citing support for racial hierarchies and white supremacy). Margaret Thatcher was a staunch defender of the apartheid regime in South Africa. Boris Johnson’s unsavory views are well-documented. While Johnson continually depicts himself as the savior of the Jewish community, his 2004 novel, Seventy-Two Virgins, includes a character named Sammy Katz, a “shady money-grabbing businessman” with a “proud nose and curly hair,” and the “unblinking eyes of a snake.” The book also wheels out the age-old antisemitic trope of Jews controlling the media. The Tories are not—and never have been—friends to migrants, Indians, Muslims, Jews, or any person of color.

Still, today, self-appointed leaders of the UK’s Indian and Jewish communities predominantly denounce the left while ignoring the blatant racism and insidious antisemitism of the Conservative Party. The Hindu Council enthusiastically supports Jewish communal representatives’ reproach of Labour, labeling the party “fascist” for its allegedly “anti-Hindu” and “pro-Muslim” sentiments. Through ads in newspapers, messages over WhatsApp, and sermons in mandirs and synagogues, leaders in both communities are instructing Hindus and Jews to vote against Labour, despite the historical and current dangers they face from Conservative rule.

Both communities are also divided along foreign policy lines. Many Jews are wary of working with people of color who espouse “anti-Israel” views, while Indians are fiercly divided over the crackdown in the disputed, predominantly Muslim territory of Kashmir—where the Hindu nationalist government under Narendra Modi has imposed draconian security measures. The far right in both countries operate in perfect harmony, celebrating the special military alliance between “strong men” Netanyahu and Modi (Israel is India’s biggest single arms seller, providing $2.6 billion worth of defense equipment in 2018). Indian politicians have also taken inspiration in Israel’s occupation of Palestine, calling for an “Israeli model” in Kashmir. The parallels between India/Kashmir and Israel/Palestine are inescapable: two non-Muslim govenments, occupying majority Muslim territories, with Jewish and Hindu establishment allies in the UK who support their policies and share in their Islamophobia.

The British media’s coverage of antisemitism and racism has played a key role in exacerbating these existing tensions. Most analysis has focused on the left’s supposedly unique antisemitism and anti-Indianism, cynically pitting minority communities against each other. The approach was most recently adopted by Chief Rabbi Ephraim Mirvis in his widely cited article on the Labour Party’s antisemitism for The Times. (Mirvis is not “Chief Rabbi” of all British Jews, as commonly assumed, but of central Orthodoxy—a strand constituting only half of the UK’s synagogue membership). Mirvis condemned Labour as irredeemably antisemitic and urged readers to vote against the party, while wholly ignoring the frightening rise of the extreme right and its physical threat to all minorities, including Jews. The op-ed propagates a narrative of antisemitism that ignores its connection to Islamophobia, xenophobia, and racism, as well as their common structural roots.

Every minority—from the visibly Muslim woman, to the undocumented queer migrant, to the Jewish family on the subway—will suffer at the hands of a Conservative government. But as we are attacked together, we will resist together. Light-hearted interfaith dinners are a start, but defeating the far right and supporting the most marginalized will require more direct action.

That’s the alternative we’ve been building in the last few weeks leading up to the General Election. Jews Against Boris and newly formed Indians Against Tory Division have been canvassing in two marginal constituencies: Harrow East and Uxbridge. Both areas are currently represented by hard-right Conservative MPs—Bob Blackman and Prime Minister Boris Johnson himself, respectively. Blackman and Johnson have spewed racism and Islamophobia, shamelessly stoking ethnic and religious tensions for electoral gain. We’ve been meeting in cafes and chatting over dosas and tea, and door-knocking in our communities and beyond to proudly demonstrate an alternative future—one rooted is justice, hope, and solidarity with all.

Too often, Jews, Hindus, Muslims, people of color, and other minority groups on the left resist working together—and with the broader left—over legitimate concerns of antisemitism, racism, and Islamophobia in our respective communities. We must recognize anxieties with empathy and humility, cast out defensiveness, and work hard to create space for everyone to learn and improve as anti-racists. We must resist being divided: there is only safety in solidarity.

Imogen Rez is an organizer with Jews Against Boris and co-founder of Vashti, a new media platform for the British Jewish left.

Ilyas Nagdee is an activist, writer and organizer with Indians Against Tory Division.