Some Notes on Jewish Lesbian Identity

“A poor Jew trying to climb out of her class learns to associate her lower-classness with her Jewishness (also her femaleness).” 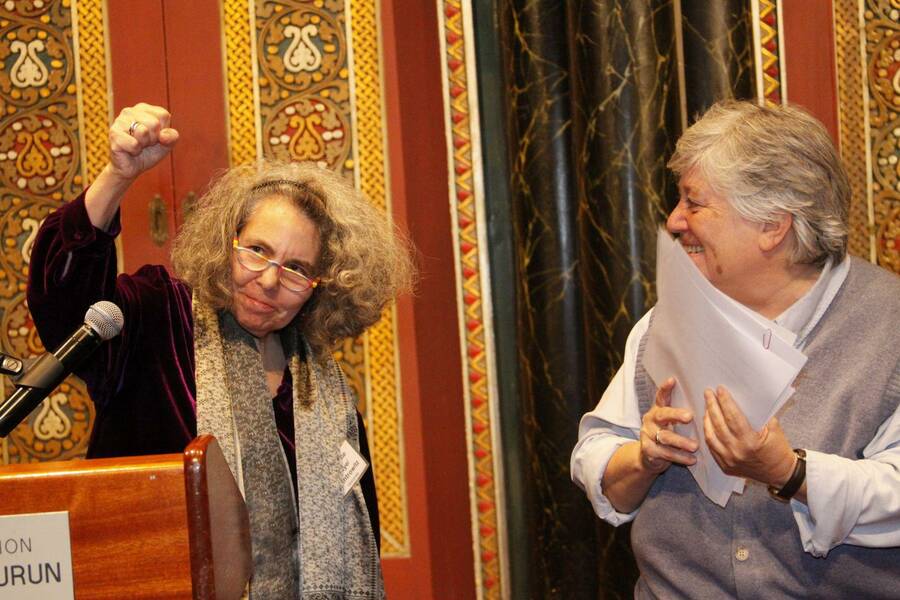 When Melanie Kaye/Kantrowitz became the founding executive director of Jews For Racial & Economic Justice (JFREJ) in 1990, she was continuing more than 20 years of work as an organizer and activist in lesbian-feminist and civil rights circles, from New York to Oregon to Vermont to New Mexico. While organizing in solidarity with Chinese restaurant workers, editing a lesbian-feminist literary journal, and working to end domestic violence, she had been contributing fundamental insights to conversations about links between forms of oppression—what Kimberlé Crenshaw synthesized as “intersectionality.”

In the 1990s and 2000s, she brought this intersectional perspective to Jewish communal organizing through JFREJ, where she served as the founding executive director from 1990–1995 and as a board member from 1995–2004. The campaigns that JFREJ operates today—Freedom to Thrive, Caring Majority, Organizing Against Antisemitism, and Let My People Go—still bear her influence in their approach to addressing police violence, the needs of low-wage workers, antisemitic violence stemming from the contemporary rise of white nationalism, and mass incarceration, among other vital issues.

In addition to co-editing the Jewish feminist anthology The Tribe of Dina with Irena Klepfisz, Kaye/Kantrowitz wrote four books: We Speak in Code, My Jewish Face & Other Stories, The Color of Jews, and The Issue Is Power—originally released in 1992 and now available in a new edition, to which I had the pleasure of contributing a foreword. This groundbreaking volume gathers some of Kaye/Kantrowitz’s most important writings articulating an intersectional queer feminist analysis. Rereading the book shortly after Kaye/Kantrowitz’s death in 2018, I was reminded how formative her analysis was to me, reading it as a young activist when it was first published nearly 30 years ago. I’m thrilled at the prospect of another generation of readers encountering her ideas now, as the Black Lives Matter movement teaches us new ways to challenge racism and white supremacy.

In this exerpt from her essay “Some Notes on Jewish Lesbian Identity,” featured in The Issue is Power, Kaye/Kantrowitz uses personal stories from her family to explore the complexities of antisemitism and its entanglement with sexism, classism, and education.

SOME NOTES ON JEWISH LESBIAN IDENTITY

Jews have always had to exist “behind the name.” In the new world too, many of us, like other immigrants, lost our names or heard them mutilated, out of gentile ignorance, laziness, or hostility. Some of us shed our names like a ragged coat.

My father’s name is Kantrowitz, my mother’s Wolfgang (I slip over the ordinary erasure of female to male name). He changed his name to Kaye just before the first child—my sister—was born in 1942. My mother tells how she threatened to name the baby Forsythia if he didn’t change it, Forsythia Kantrowitz. I have heard her tell this story a dozen times at least; always there is an assumed comicality about the name. My father says everyone called him Mr. K. anyway, at the vacuum cleaner store where he did sales and repair. For business, because Kantrowitz was too long, too hard to say.

At the dyke bar in Portland I tell Amy Kesselman, my best Jewish friend, that I’m thinking about taking back my mother’s maiden name—as far back as I can go through the women—or my father’s name—or both. “Kaye is a made-up name,” I say, “It has no history.” Amy, historian, tells me, “Just because a history isn’t pretty doesn’t mean it isn’t history.”

Kaye is both history and closet. History of a kind of closet. Kaye is Kantrowitz Kaminsky Keminetsky Kowalsky Klutz Korelowich Ka. . . .

(think about asking every Jew you know: what was your name?)

I recently met a woman who knew me through my written work. “Oh,” she said, “I expected you to be tall and blonde.” I joked, “I must be doing something wrong”—but it made me feel funny.

But whatever the name, if you looked like a Jew, you couldn’t hide.

In the Jewish resistance, women did much of the courier, weapon-gathering, smuggling, communication, and guide work—in part because they could pass more surely than the men, who might be asked at any moment to drop their pants. The many Jews—women and men—who did pass testify to how many Jews look “Aryan.”

Yet at least one woman resistance fighter was stopped leaving the Warsaw Ghetto because she had a Jewish nose.

This historical flash may put into perspective the painful, expensive operation which men (often Jewish ones) make jokes about—the nose job. In the heyday of Barbra Streisand, it’s hard to remember that every Jewish teenage girl of my generation whose nose “looked Jewish” longed for another chance. Parents who could pay, paid. When my cousin Susan turned 15, she got a nose job. When I saw her a week later, she still looked like someone had beat the shit out of her—her face bruised, puffy—and a swollen nose which, a few months later, “reverted.” More money, more nose-breaking, more pain. Again, it reverted. She had her nose re-done three times. I can’t remember what it looks like now, whether or not the nose job was “successful.”

We all knew Jewish noses were ugly. Never asking, “why ugly?” or answering, “because Jewish.”

When I was a tiny girl, my aunt Edna said of me, “look at that, a nose like a shiksa.” I snuck into the bathroom to stare in the mirror, sobbing, “I don’t look like a shiksa, I don’t”—this, before I knew what a shiksa was. But later I took a strange sickish pleasure in “my nose” and would tell people what my aunt had said, partly to make them notice my nose.

Through my teens and halfway through my twenties I was setting and sometimes bleaching, sometimes straightening my hair. What I did to my eyebrows will be understood only by those women who also have black bushy eyebrows. I was not trying to look like a shiksa—I was trying to look pretty.

(why ugly? because Jewish.)

I was also trying to sound pretty (cultured).

Sometime around ninth grade, words like yenta, shmate, bubbe began to embarrass me. I—as I thought of it then—aimed higher. What I meant by this was vague but included museums, foreign films, and an escape from Brooklyn—dates, engagement parties, weddings at temples with booze and cocktail franks and longline bras and girdles and dyed-to-match shoes and a band playing Anniversary Waltz while uncles made cracks about wedding nights. It also meant escape from a six-days-plus-two-nights work week selling longline bras and girdles in “the store”—my father’s and his sister’s business, where all of us worked, full-time, part-time, summers, Christmas, at various times in our lives.

And words like shmate trapped me—no matter who said them—marked, stripped, and revealed me. I came from people who talked like that. I came from them and would be stuck with their lives. In case I needed proof of the connection between their lives and that accent, I had only to attend C.C.N.Y. and discover that in order to graduate, I had to learn NOT to talk like that.

But last night I sang Yiddish songs with a dozen Jewish women. L., a woman in her twenties was teaching us the words, I was moved by her pleasure in the words, the sound and lilt—pretty. She seemed like a daughter I might raise, braver and less scarred—the sounds she speaks, her inflections are the very sounds I grew up trying not to make:

In these songs the ways words sound good is to sound like that, not “uneducated English,” but Yiddish, a language.

I borrow from L. a book, Der Yidisher Lerer (The Yiddish Teacher). My eyes have always wobbled at the sight of Hebrew or Arabic letters, but the first word in this book is bubbe; the second is mame. These words leap from my blood, my mouth knows how to say them. At two letters a day I’ll have the alphabet in a couple of weeks. shvester. zogt. vaser. vos vil di bubbe? di bubbe est a zeml. My tongue.

In the Jewish Women’s Group I have felt ashamed of my ignorance—of Hebrew, of religion. I’ve muffled words to songs rather than ask anyone to slow down. Passover with these women, each of us reads something from the service, adding something of her own. I talked about my grandmother Helen Wolfgang who had just died that week—how she had left Poland as a teenager and was rebellious against religion because Jewish orthodoxy had been stifling to her freedom—how we always had a seder at her house, but with bread on the table as well as matzoh. One woman—bless her—said, “let’s drink to her—what was her name?” But from many others there, I felt disapproval so clear it was visceral. I thought, many of these women were raised by professional parents, sent to Hebrew school, taught cultural pride. A poor Jew trying to climb out of her class learns to associate her lower-classness with her Jewishness (also her femaleness).

I notice in the group that P. who knows Hebrew commands much respect. She’s been researching Jewish ceremony, looking to create a matriarchal religion, and she performs an evening prayer for us, closing the Shabbos, something to do with the new moon. All the while she holds and rocks and tips the glass of wine (which is really grape juice, none of these women drinks) she has poured very full; and L. whose house it is and whose rug it is not keeps bending over P. to steady the glass, her face showing anxiety about the juice and the rug but P. will not sip off the top, she keeps waving her arms and the juice slops dangerously to the edge and some drops spill on the blanket, yes, on the rug, but there’s no stopping P. as she performs the ritual—

(and I think, this is why I don’t like religion, she is wonderful in the rabbi role, absorbed and holy, but she won’t have to clean up the spilled juice)

I also notice that P., in her knowledge of Hebrew and religion, those arenas of Jewish male activity, is more heeded than L. who is younger, softer, and knows Yiddish and hundreds of songs, and worries about her friend’s rug. The hierarchy of Hebrew over Yiddish, male over female, rich over poor replicates here. If you’re going to be Jewish, at least be refined; not female, especially not Jewish female.

From The Issue Is Power: Essays on Women, Jews, Violence and Resistance. Copyright © 1992 by Melanie Kaye/Kantrowitz. Reprinted by permission of Aunt Lute Books.

Melanie Kaye/​Kantrowitz (1945 – 2018) was a writer, activist, and professor who helped initiate a diverse, complex radical Jewish feminism in the late 20th century. She was the author or editor of five books.

Julie R. Enszer is a scholar and poet. She is the author of four poetry collections and the editor of Sinister Wisdom.