Rallies won’t save abortion rights. What will? 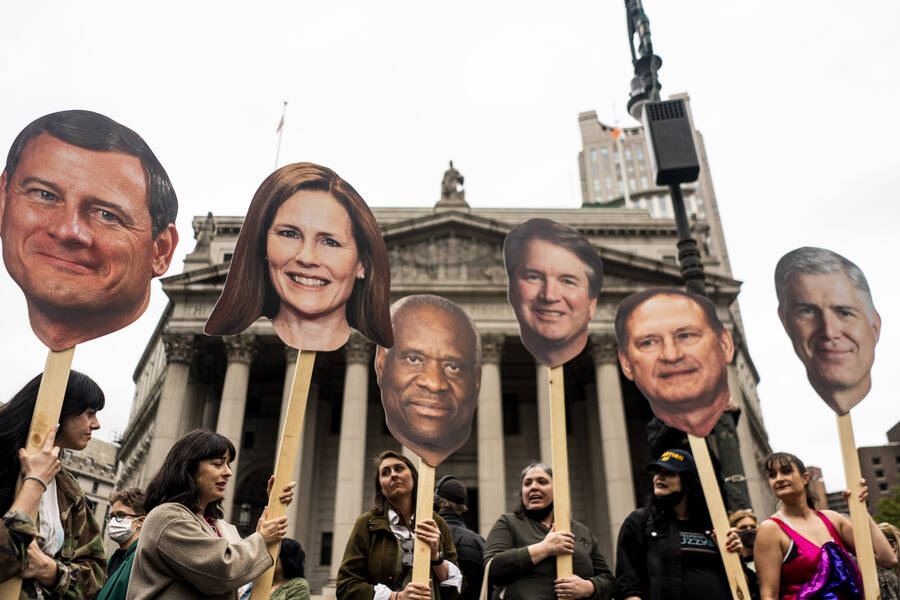 AS IT TURNS OUT, there is no way to prepare yourself for this kind of loss. So many of us knew it was coming; we harbored no faith in the court or in the illusion of “American progress.” And yet, when Justice Samuel Alito’s draft opinion overturning Roe v. Wade leaked on Monday night, I broke down in sobs—heavy, noisy cries the likes of which usually elude me.

My mother has been a reproductive rights activist for decades. She had an abortion in 1970 at the age of 16. It was illegal in Florida, so my grandmother flew with her to New York to have the procedure. Several years later, my mother was one of the founders of the Women’s Emergency Network, a South Florida-based abortion fund which is still in existence (and which you should give to right now because Florida is fucked; a 15-week ban will go into effect July 1st). It feels gratuitous to offer this story as evidence of some personal connection to the issue. There is nothing remarkable about it, except perhaps that my mother could afford to fly out of state for her abortion, or that she had the support of her mother to make the trip. This issue turns on its ubiquity (one in four women have had an abortion), and also its very personalness. But all to say: I grew up listening to the stories of the women who fought for abortion access before Roe. These were the only activists I knew for many years, and this was the only issue that mattered. Before I could reliably hold a cup without a sippy lid, I was holding those big, round, blue “Keep Abortion Legal” signs. In photos, I peek out over them, my little fingers barely visible on their edges.

The rallies I attended as a child in the late ’80s and early ’90s were essentially pep rallies. Though the speakers stressed vigilance against the advances of the anti-choice movement, I don’t recall that there was any sense Roe could actually be overturned. I was reminded of the almost cheerful nature of those marches—victory laps too superstitious to entirely announce themselves as such—on Tuesday evening at a rapid-response rally in New York’s Foley Square. Despite the grim news, the impending revocation of reproductive healthcare and bodily autonomy, we were once again having a pep rally. I stood on the grass across the street from the New York Supreme Court—chosen for its resemblance to the federal Supreme Court in Washington—too far from the speakers to hear anything but the applause. People brought witty signs. I didn’t encounter anyone who asked me to do anything, or who tried to pull me in to further organizing, and then I left. I was told later that Amy Schumer spoke? Mayor Eric Adams’s lieutenant was booed? That’s all I heard.

I admit I almost didn’t go to the rally for this very reason. I admit if I had my way I’d never go to a rally again. Too many of them are exercises in futility, demonstrations of nothing but our powerlessness, and I often leave feeling worse than when I arrived. In his essay “The Nature of Mass Demonstrations,” John Berger recognizes the modesty of protests, even those with broad participation. Distinguishing the protest form from riots or revolutionary uprisings—which are meant to address desperate need and to take over state power, respectively—Berger writes that the aim of a demonstration is “symbolic: it demonstrates a force that is scarcely used.” In this regard, even the best mass demonstrations are exercises—Berger calls them “rehearsals for revolution.” Their function is to prime the consciousness of the participant—to create “revolutionary awareness”—while provoking the state into a response. For many of us, the airport protests that followed Donald Trump’s 2017 Muslim Ban embodied the potential of a mass demonstration to effect such revolutionary awareness, to help the participant realize the feeling of collective power. As I’ve written, the location of these protests and the boldness of the crowd presented as a credible threat to the usual order. (The 2020 George Floyd uprisings were something different; their power seemed inextricable from the power of the riot.) But Berger recognizes that there are demonstrations that fail even at the level of metaphor: “[A]ny demonstration which lacks this element of rehearsal is better described as an officially encouraged public spectacle.” The rally this week at Foley Square, taking place as it did in a state which enjoys broad support for abortion rights and faces no threats of curtailed access, felt like the latter.

Though I have organized in the past, I’m not an organizer; journalism has demanded too much of me these past few years, and if I’m being honest, I feel happier here. Which is to say I don’t mean to be a backseat driver to the activists doing their best to organize amid terrible conditions—and particularly the repro activists who have been tirelessly responding to the five-alarm fire that’s been raging for years. The left is in a tough place. The resolve to “resist!” during the Trump years has in many places given way to resignation or exhaustion. Bernie and the Squad seemed to telegraph an opening, and many left groups shifted their strategy to electoral work, only to be thwarted by the absurd workings of the Senate and the recalcitrance of a complacent, aging party leadership. The DSA, so far the only group to present as a viable address for building power on a national scale, is beset by ideological fractures largely relating to the question of electorialism versus more outsider strategies. We have spent years on the streets, “rehearsing,” with no indication that we’re getting closer to opening night.

On the specific question of a constitutional right to abortion, the debate about strategy seems to be settled, as the GOP dominates the majority of statehouses; the Supreme Court is a fundamentally unaccountable, anti-democratic body; and Democrats who control the White House and Congress are responding to this catastrophe by telling us to vote. Meanwhile, there is incredible, often POC-led organizing happening in red states, and particularly in the South, to expand access to reproductive healthcare—regardless of legality—and to link those efforts to broader community defense and mutual aid networks. The only hope is there, in the people mounting a challenge to the sovereignty of the state by building a new material reality. Earlier this week, we published a brilliant interview with the philosopher Olúfẹ́mi O. Táíwò in which he placed his faith in the power of these world-building acts over the capacities of protest: “​​I don’t think we can protest our way to a better social structure . . . I don’t think we can destroy our way to a better world. I’m encouraged by the work people are doing to build things: workers building unions, people building resilient food systems outside the control of corporations, communities building non-carceral strategies for preventing and responding to harm.”

The groups doing this work deserve all our money. At the same time, I refuse to believe that clicking “donate” is the only role for those of us feeling relatively secure in blue states. The rollback of abortion rights seems to be a reliable measure of democratic backsliding, and the language of Alito’s decision opens the door to regression on LGBT rights as well. On top of the GOP’s cruel legislative attacks on trans kids, the anti-protester laws, and the anti-CRT laws, we seem to be entering a new phase of repression. For as long as I can remember, abortion access has been the only thing credibly promised to us by Democratic politicians, and also, it seems to me, one of the few issues where liberals—especially women—have expressed some proclivity to greater militancy. On the face of it, now seems like an opportunity for mass mobilization. I am nursing a fantasy in which leftists and liberals band together to suspend business as usual. Clinic defense, yes, but also, offense. Occupy the statehouses in all 50 states! Withhold our labor—a general strike! Not to pressure electeds in the conventional sense, but to destabilize the presumption of their power in the first place.

Activists I have been in touch with in the last few days have responded to this fantasy with despondence. People deep in reproductive justice struggles feel burned out and taken for granted. People who have long organized direct action campaigns in response to every other political emergency have no faith in the capacity for mass movement while the left is so weak. Everyone is doing the best they can and everyone knows it’s not enough. Perhaps the only thing left to do is to protect each other, to follow that directive wherever it leads, to trust that the vines we plant will encircle the current system and eventually arrest it entirely. But I suppose at the end of the day, I disagree slightly with Táíwò. I don’t think there can be any real building without at least some tearing down. I’d like to see our mass gatherings take that prospect seriously.

Read 1 letter to the editor about “Rehearsing Defeat”

Responsa
Beyond Grievance
Though it may be a potent political tool, grievance can also maintain our investment in our own oppression.
Arielle Angel
Responsa
On Loving Jews
For Jews engaged in Palestine solidarity work, what might be gained by refusing excommunication from our own communities?
Arielle Angel
Sign up for our email newsletter, featuring exclusive original content
Want original reporting and analysis on Israel/Palestine?
Sign up for the Tuesday News Bulletin.