In a recent essay on the state of abortion and reproductive justice organizing, Arielle Angel bemoans a depressingly tame rally held at Foley Square the day after the leak of the Supreme Court memo, offering up a “fantasy in which leftists and liberals band together to suspend business as usual. Clinic defense, yes, but also, offense. Occupy the statehouses in all 50 states! Withhold our labor—a general strike!” From Foley Square to general strike—and what of the steps in between? Angel briefly mentions the work of grassroots reproductive justice organizations in red states to point to the fact that things are indeed happening, but is conspicuously silent about the substance of this organizing and the fact that it is present in blue states as well. Despite her concern for questions of left-wing renewal, she ends up overlooking a key question that the reproductive justice movement is grappling with: How, along with other militant struggles confronting repressive state and class power, can we constitute an emergent bloc that could in fact break through the liberal holding pattern?

For decades, the grassroots reproductive justice movement has been challenging the narrow framework that understands abortion as a matter of individual privacy, arguing instead that attacks on abortion and reproductive freedom are about social and political control. There is no “right to choose” without the material and political capacities to nourish those choices. There is no “right to choose” without the autonomy of women, Black, Indigenous, and people of color, queer and trans people, young people, and other groups whose empowerment threatens a heteropatriarchal, racist, capitalist order. As SisterSong originally put it, reproductive justice is the right “to maintain personal bodily autonomy, have children, not have children, and parent the children we have in safe and sustainable communities.” This expansive framework also encompasses the right to vote; access to health care, decent work, affordable housing, and education; freedom from racist violence; and more.

Challenges to mainstream abortion and reproductive health institutions have always been part of the movement. Recently, these have included unionization efforts among reproductive healthcare and domestic violence workers at places such as Planned Parenthood, the Guttmacher Institute, and Sanctuary for Families. Grassroots organizing has taken many other forms, among them the creation and maintainance of independent clinics and abortion funds, the development of strategies to resist clinic invasions, and the launch of mass trainings in self-managed abortion, as well as campaigns to raise awareness around accessing abortion pills even in states with bans, and to defend people prosecuted for ending their pregnancies. This plurality of approaches constitutes a more comprehensive challenge to the power of the right and the state than the establishment strategy of simply encouraging the disaffected masses to vote blue. Ultimately, the autonomy of grassroots movements—their independence from both the liberal institutions that dominate the abortion discussion and what is often considered the “traditional” left—serves as a strategic strength in the wider project of left mobilization, holding space for building the very capacities that can regenerate a mass street politic, which in turn can sustain and radicalize our steady base-building work.

Here in New York, the grassroots group that one of us is part of, NYC for Abortion Rights, can offer concrete examples of how reproductive justice organizing serves to foster mass street politics rather than acting solely as a form of defense, as Angel claims. For these organizers, the work of defending abortion clinics is part of an offensive strategy. Last summer, for example, they were successful in pressuring a church in Brooklyn to stop hosting the Archdiocese’s monthly anti-abortion procession to the neighborhood Planned Parenthood, and, only several days after Angel’s piece was published, they halted the procession in its tracks and prevented it from arriving at the clinic at all. Through its clinic defense work, the group has also, over the course of many years, developed a power analysis of the Catholic Church, the largest real estate holder in the city. This strategic focus on the ideological and material base of the anti-abortion movement’s ultra-right wing also involves an analysis of the police, who not only protect the antis and arrest clinic defenders (as they did two NYCFAR members last year) but also criminalize people who have abortions.

In getting to the root issue of criminalization—in identifying the interests that the state is captured by, capitulates to, and enacts social control on behalf of—we can see the common material base of our own side, of feminist and abolitionist struggles in the city. And in standing with other groups that are galvanizing opposition to the authoritarian administration of Eric Adams, we can see that organizing against abortion criminalization is “an opportunity to upend carceral logics and the culture of criminalization and punishment that materially impacts all of our movements,” as the abolitionist project Interrupting Criminalization has argued in coalition with reproductive justice groups. We can perceive these shared material concerns in the efforts of the Crown Heights CARE Collective to agitate with and support sanitation workers in refusing to carry out homeless sweeps, or the call of Coast to Coast Chinatowns Against Displacement and Red Canary Song to reject heightened policing as a solution to anti-Asian violence, particularly when massage and sex workers face extreme surveillance from the NYPD. Our movement is likewise connected to the struggles of taxi workers, delivery workers, warehouse workers, transit workers, service workers, teachers, students, tenants, community organizers, and others who necessarily confront racist police rule in their efforts to build power. As our comrades in Latin America have taught us in articulating the various class dimensions of criminalized struggles, we can collectively and directly counter a ruling class that—in these last two years marked by a pandemic, uprising, and counterinsurgency—has escalated what Ruth Wilson Gilmore calls “organized abandonment” and the repression of anyone challenging its enforcement.

To that end, those of us who identify on the left here in New York, especially those working in media, have a role to play in exposing and challenging the concentrated property and power of anti-abortion institutions and their allies, and in highlighting connections to other oppositional struggles. With an eye to cohering coalitions that share a power analysis of city and state politics, this work can inform political strategies around eroding the power of landlords, bosses, and cops, and thus can enhance our political capacity for solidarity with embattled organizers and clinic workers in red states. New York need not be just an abortion haven, as liberals would have it. Nor do we need to internalize their dominant influence by treating powerful mass mobilizations as a distant fantasy while missing the more present potential of antifascist, feminist, and abolitionist struggles—struggles that we must all have a hand in nurturing and spreading across our neighborhoods, our workplaces, and, yes, our streets.

As we enter the harsher terrain that will follow the fall of Roe, we need to take stock of these movement dynamics far more closely—and we need journalists on the left to stand with us at every step.

Camila Valle is an organizer with NYC for Abortion Rights. 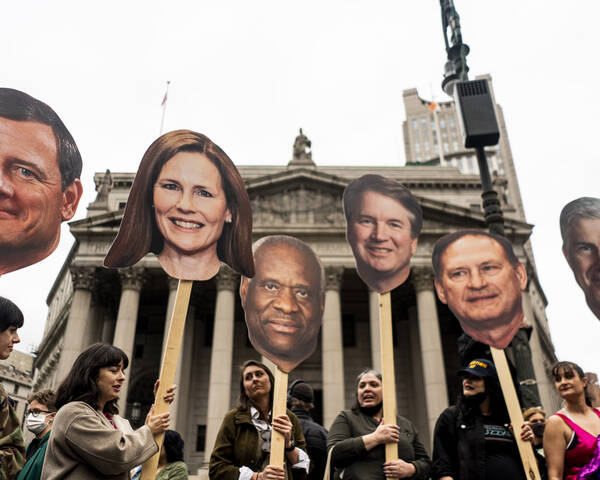 Newsletter
Rehearsing Defeat
Rallies won’t save abortion rights. What will?
Arielle Angel May 5, 2022