Princeton Students Voted to Boycott Machinery Used by Israel. Proponents of Israel Are Countering with Misinformation.

On and off campus, advocates for Israel have publicized falsehoods about the vote. 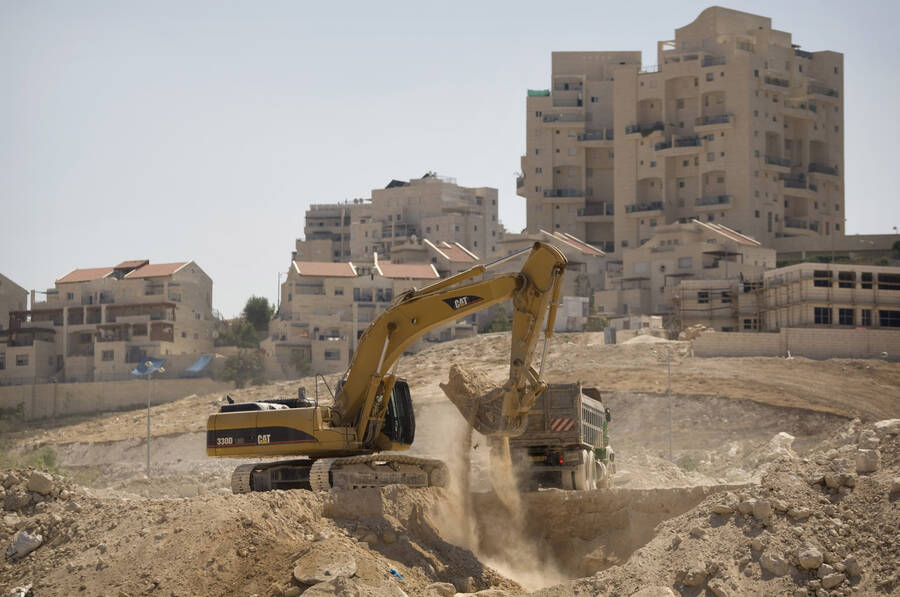 A bulldozer operates at a construction site in the Jewish settlement of Maaleh Adumim, near Jerusalem, August 31st, 2010.

AT PRINCETON UNIVERSITY last week, undergraduates voted on a referendum to boycott Caterpillar, a manufacturer of machinery used by the Israeli government. A majority of votes were cast in favor of the referendum—52% to 47% against—but the results have not been certified.

Instead, an opposition bloc has stalled the process, claiming that the election was conducted improperly and calling for the vote to be tossed. National Israel-advocacy groups have aligned themselves with the opposition effort, first by making ad buys on Facebook in the lead-up to the vote, and afterward by claiming incorrectly that the referendum had failed. In the national and international media, coverage of the referendum has either pushed the falsehood that the referendum failed, or obscured the victorious vote by describing it as a “debate.” The vote has become a lightning rod for Israel-advocacy groups and ideologically aligned media outlets, who have used smear campaigns and misinformation to shape campus politics from without.

Referendum Question No. 3, sponsored by the president of the Princeton Committee on Palestine (PCP), seeks the expulsion of “all Caterpillar machinery” from the university’s many construction sites—including a quad, a campus extension, and a new art museum. Caterpillar’s equipment, the referendum says, has been used by the Israeli government for “the mass demolition of Palestinian homes, [and] the murder of Palestinians and other innocent people,” like the American activist Rachel Corrie, who was killed by an Israeli military bulldozer in Gaza in 2003. Among its stipulations are the renegotiation or cancellation of university business with contractors who use the machinery, and a prohibition on the school’s future use of it.

The school’s paper of record, The Daily Princetonian, reported that the advocacy groups Israel War Room (IWR) and Alums for Campus Fairness (ACF) spent at least $1,100 on Facebook advertisements challenging the referendum in the weeks before voting began on April 11th. IWR, whose self-styled mission is to “fact check lies and give context to expose misleading narratives about Israel,” described the referendum as “racist” in an ad. ACF, an organization focused on Israel on campus, said in one of its ads, “Jewish Students are at risk at Princeton University. Stop ANTISEMITISM at Princeton.” ACF also circulated a petition on Facebook condemning “a nefarious resolution that would foment antisemitism and threaten Jewish students.” The petition called on Princeton to codify the International Holocaust Remembrance Alliance’s definition of antisemitism, which deems some criticism of Israel antisemitic. According to tax filings, ACF is a project of StandWithUs, a prominent right-wing advocacy group focused primarily on campus BDS efforts.

When voting ended on April 13th, students opposing the referendum mounted their challenge. Myles McKnight, president of the conservative Open Campus Coalition, told Jewish Currents that his objection, the first delivered to leaders of student government, turns on what he described as “misinformation” spread before the voting period began. “The chief elections manager, the highest ranking individual of the Undergraduate Student Government, misinformed the opposition before the campaign period as to how abstentions would be handled,” McKnight said. On March 28th, elections manager Brian Li told the president of Tigers for Israel, Jared Stone, that abstentions would count toward the voting total, raising the threshold for the referendum to succeed. On April 13th, hours after voting ended, Li rescinded his guidance and affirmed to Stone that abstentions are excluded from the final tally, citing the student government constitution. (Li did not respond to a press inquiry.)

McKnight and Stone claim that Li’s miscommunication had a material impact on the opposition’s strategy, and they want the vote thrown out. According to McKnight, the student government should “make explicitly clear that the referendum neither passes nor fails without declaring a victor or a failing party.” Any final decision on the vote, he said, “would be horribly unfair given that the campaign was conducted on the terms of misinformation.” Stone, a leader of the referendum’s opposition, told Jewish Currents that he and his allies had urged voters to abstain directly because of Li’s guidance. He said the opposition promoted abstentions “to be empathetic to students who did not want to take a firm stance,” while still earning “votes favorable for the opposition.” (On the Instagram of Stone’s organization, Tigers for Israel, there are no mentions of abstentions, but seven different posts urging students to “vote no” on the referendum. Similar posters appeared around the campus.)

Harshini Abbaraju, a member of the PCP, told Jewish Currents that the opposition’s challenge to the result was presented in “bad faith,” but it has become fodder for right-leaning media outlets and Israel-advocacy groups, which have used it for their own misinformation. StopAntisemitism.org, a right-wing monitoring group that routinely labels Palestine advocates antisemitic, claimed victory and explicitly accused the election manager of “trying to throw out all the absentee votes,” according to a screenshot of a deleted Instagram post reviewed by Jewish Currents. The Times of Israel reported that students “rejected an anti-Israel referendum,” as did Jewish Insider and B’nai B’rith. The fracas has gained enough momentum that the Academic Engagement Network, an Israel-advocacy group focused on Israel in academia, condemned the referendum for its “unbridled hatred of Israel.” Among its board members is Deborah Lipstadt, the newly confirmed US special envoy to monitor and combat antisemitism.

As is common in campus politics, a successful referendum will function only as a recommendation to the university’s administrators. “We hope to use it as a tool for starting a dialogue with them,” Eric Periman, the author of the referendum and president of the PCP, told Jewish Currents. “We need the cooperation of the administration in order to chart a plan to boycott Caterpillar.”

With enough advocacy against the plan, however, the referendum may not be brought to the administration. Since voting ended, IWR has purchased another $800 at minimum in Facebook ads, wrongly announcing the defeat of the referendum to more than 100,000 followers, the Princetonian reported. “The Princeton University referendum question targeting Israel and Caterpillar equipment has been defeated,” the ad said. “Thank you to all the students who rejected the hateful BDS-affiliated measure.”

Palestine activists at Princeton have frequently been subject to attacks from Israel advocacy groups. In the past, members of the PCP “have had to take out no-contact orders from the university because of the level of harassment” from students who support Israel, Abbaraju said. This time, the opposition, media outlets, and outside advocacy groups have “steered the narrative into this murky area where anti-Zionism is antisemitism, maligning people, including Jewish progressives, as hateful bigots.” Proponents of Israel, she said, “can’t believe that the tides have been turning.” Periman agreed. “The other side spent thousands of dollars on the campaign,” he said. “We didn’t spend a single dollar. We spoke with people one-on-one, and that’s how we won.”

Update, 4/20/22: On Wednesday afternoon, Princeton’s undergraduate student government announced that it voided the result of the referendum, upholding the opposition’s appeal which objected to Li’s inconsistent guidance on the function of abstention votes. In its account of the decision, the undergraduate Senate acknowledged that “[u]nder the provisions of the USG Constitution, with a majority of student votes, Referendum No. 3 passes,” but still “voted to uphold the appeal.” Fifteen members of the Senate voted in favor of the appeal, five voted against it, and four others abstained. The Senate also produced multiple prescriptions: the student government will acknowledge neither the success nor failure of the vote; it will clarify the constitution’s position on abstentions; it will consider expanding its team of election managers; and it will carry out a review of the constitution and election policies, with an eye toward further amendments. Importantly, the Senate will transmit to the school’s administrators a “Paper on Referendum 3,” detailing the substance of the referendum, the appeals process, and the decision-making calculus of the Senate. Stone, the president of Tigers for Israel, did not respond to a request for comment. McKnight, an opponent of the referendum, declined to comment. Periman said, “It is disappointing to see the Undergraduate Student Government act in violation and contradiction of their constitution by not declaring a clear winner in this referendum election.” Abbaraju said the overturned election was the result of “the opposition’s rhetoric . . . maligning us as bigots.”