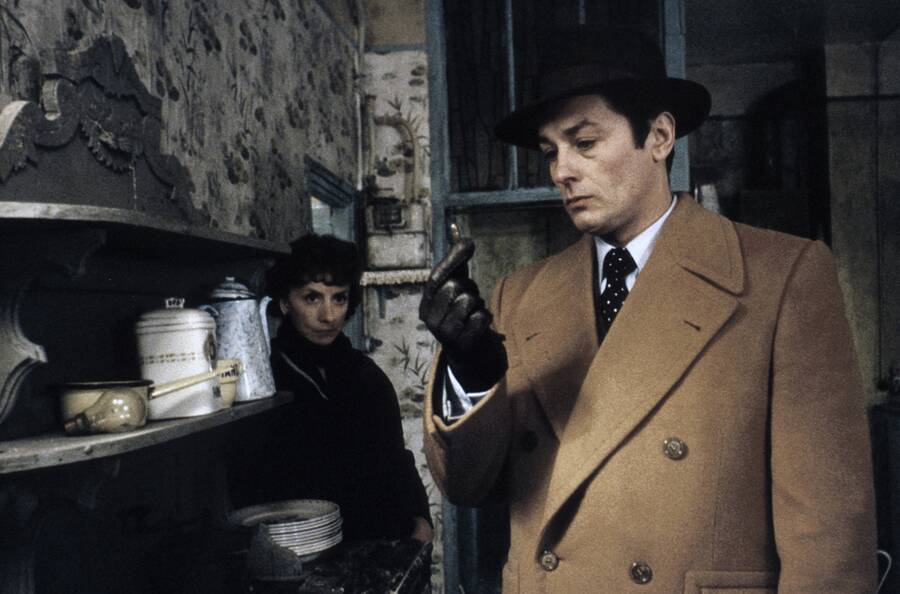 WHEN JOSEPH LOSEY’S FILM Mr. Klein was released in France in 1976, the country still hadn’t faced up to the reality of its conduct toward the Jews during World War II. Its art reflected this absence. In the world of literature, there had been Andre Schwarz-Bart’s 1959 novel The Last of the Just, and in film there had been, most notably, Claude Berri’s charming The Two of Us in 1967—but the real reckoning was still to come. Claude Lanzmann’s Shoah was nine years away. President Jacques Chirac’s acknowledgement of French guilt in the “rafle du Vel d’Hiv”—the roundup of Jews that took place on July 16th, 1942—would not occur until 1995. This mass arrest, named for the bicycle racing track in which the Jews were held, is the event that brings Mr. Klein to a close.

It is difficult for us to appreciate how unique and how path-breaking Mr. Klein was—and, in many ways, remains. Mr. Klein is part of the series of masterpieces Losey directed in his final years; these also include Accident, The Go-Between, and The Servant. It was not his only foray into historical drama: Losey, a former Communist forced to flee the US during the McCarthy era, made The Assassination of Leon Trotsky in 1972 (casting Richard Burton as the great revolutionary). This film is one best left forgotten. Mr. Klein, on the other hand, remains as strong and thought-provoking a film today as it was over 40 years ago.

The film’s forthcoming two-week run at Film Forum in New York City provides a welcome occasion to revisit the work. This complex tale of Robert Klein (played coldly and clinically by Alain Delon)—a wealthy gentile who exploits Jews in peril, only to find himself mistaken for a Jew—remains an outlier in the genre of Holocaust films. It stands out for the way it refuses the easy paths of pure villainy and simple redemption. The titular Mr. Klein is far from an attractive character—he’s unconcerned about the fates of the Jews he’s “assisting,” abusive and dismissive toward his mistress, and enraged not by the anti-Jewish laws, but by the injustice of having them applied to him—yet he’s not presented as a villain. Neither is he a man who ultimately sees the error of his ways or his own moral weakness. He is, in his way, a perfect stand-in for Vichy France.

Fundamentally, Mr. Klein is a film about the absence of heroism. Fittingly, it’s also one that makes it impossible for the French to absolve themselves of their country’s part in the deaths of over 70,000 Jews. The film quietly makes clear the active role the French played in the roundup of its Jews, as well as its collaboration with the occupier. The radio broadcasts poems in praise of the Legion of French Volunteers Against Bolshevism, who fought alongside the Germans on the Eastern Front; cabarets present antisemitic shows; the walls are plastered with posters attacking Jews and Communists; and the portrait of Marshal Pétain, the Chief of State of Vichy France, hangs on office walls everywhere. Germans appear as extras, visible only in the background of scenes. The preparations for the roundup of 13,000 of Paris’s Jews, which begin to intersect with the main plotline, reveal that those planning, reviewing files, carrying out practice runs and then the actual raids, were French. Everywhere, Mr. Klein emphasizes, the French were complicit: not just among the police, or at the genocidal Commissariat of Jewish Affairs, but even within the public transport system, which provided the buses to carry the Jews from their homes to the bicycle racing track where their Gehenna was to begin.

Klein is himself a minor cog in this machine. An art dealer living in a stylish apartment in the 7th arrondissement, he is one of those who found a way to profit from the misery, purchasing, for knockdown prices, works of art sold by Jews hoping to flee the fate awaiting them in France. His business card has been spread across Paris, which leads to his notoriety—and ironically, his downfall, for if Robert Klein is not a Jew (his father heatedly claims that the family has been French and Catholic since Louis XIV), then there is another Robert Klein who is, and who intends to make use of the opportunity provided by his double.

The Klein we know has two quests: proving he is not a Jew and tracking down the man responsible for the misinterpretation. The latter hunt occupies him to the detriment of the former. Missing one document that would seal the proof that he is four-quarters Aryan and so has nothing to fear, Klein makes no special effort to speed up its delivery, preferring to concentrate on the hunt for the Jewish Robert Klein who is the source of his woes. He finds it inconceivable that he should be treated like a Jew, and even more, he has complete faith in the workings of the Collaborationist government—a faith that never wanes as he stoically and silently boards a bus loaded with Jews being taken to the Vel d’Hiv. The only reservation he shows is in his refusal to submit to the absurd measurements of face, skull, and gait that were used to prove or disprove Aryan-ness.

Klein remains doggedly obsessed with locating and understanding this alternate self who has occupied his identity. It seems they are, at least physically, very much alike. In a photography shop where Klein has a photo of his alter ego developed, the shop owner mistakes him for his doppelgänger. But there’s more: in the Jewish Klein’s apartment can be found the same edition of Moby Dick the Aryan Klein has in his own posh flat; both men are involved with similar women. The two Kleins are inverted images of each other: Jew and non-Jew; profiteer and resister; bourgeois and Communist. In the end, they are headed to the same fate.