Welcome to the Tuesday (or in this case, Wednesday) News Bulletin! Jewish Currents is constantly getting quotes and scooplets from our network of sources, and every Tuesday, we release small stories exclusive to our newsletter subscribers in emails like this one. In addition to original reporting, the Tuesday News Bulletin serves as a forum for aggregating stories Jewish Currents staffers are tracking, with plenty of links to other publications so you can keep up with everything happening on our beats. 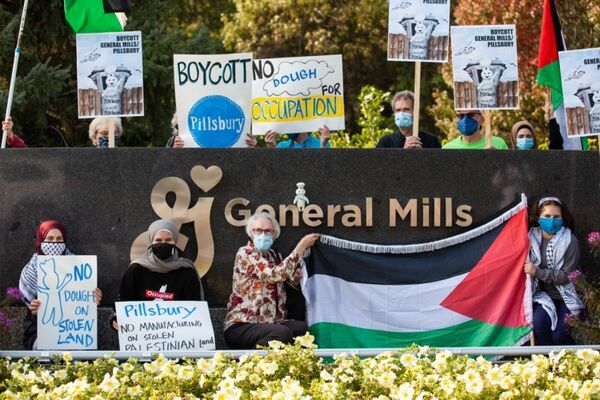 Protesters call on General Mills to stop manufacturing Pillsbury products on an illegal settlement in the occupied Palestinian territory. The demonstration took place at the corporation’s Minneapolis headquarters on the eve of its annual board meeting.

For the past two years, the American Friends Service Committee (AFSC), American Muslims for Palestine, and other Boycott, Divestment, and Sanctions (BDS) activists have lobbied General Mills to quit producing Pillsbury dough in a factory in the East Jerusalem industrial settlement of Atarot, which, AFSC campaign directors have written, exploits “land, water, and other resources that were captured by force from their legal Palestinian owners, in violation of international law.” Activists picketed grocery stores, protested shareholder meetings, and even got the living heirs of the Pillsbury family to speak out in favor of divestment. General Mills had been one of the last remaining multinational corporations to operate a factory in the occupied territories after other companies—including the French-Belgian bank Dexia, the French telecom company Orange, and even the global security firm G4S—have quietly backed out of their enterprises in the settlements in recent years. So when General Mills announced on May 31st that it was not just leaving the factory, but selling off its dough-marketing joint venture in Israel entirely, BDS activists celebrated: “VICTORY! General Mills to divest from apartheid Israel,” the BDS movement wrote on its website.

General Mills, however, quickly moved to clarify that the decision was purely economic, part of a larger strategic shift that has also included selling its dough business in Europe. “We have made clear the global business strategy that drove this decision. Any claims by others taking credit for this decision are false,” a spokesperson for the company told the Jewish Telegraphic Agency shortly after the announcement, a claim picked up widely by Jewish and Israeli publications. The backlash, accordingly, has been relatively muted. Organizations and commentators that oppose BDS have praised and amplified General Mills’s economic motivations for the division, eager to refute BDS supporters’ claims to have secured a win. While many states have anti-boycott laws that require them to divest from companies that boycott or divest from Israel, none have announced plans to divest from General Mills. It’s a stark contrast to the response that greeted Ben & Jerry’s last year when they announced they would cut ties with their ice cream distributor in the West Bank explicitly due to concerns about Israel’s human rights abuses. In response, states including Florida, Texas, Arizona, New Jersey, New York, Colorado, and Illinois have ended contracts with or divested from Ben & Jerry’s parent company Unilever, or have announced plans to do so.

“I’m sure that General Mills had [the Ben & Jerry’s backlash] in mind when they were planning their announcement and strategy. I think it was very cleverly done,” said Dov Baum, director of the economic activism project at the AFSC. Baum argues that it’s likely that General Mills was responding to pressure from BDS activists, especially since the company has been visibly linked to its settlement activity: It was one of just seven US companies listed in a 2020 UN report of firms doing business in the settlements. “Israel/Palestine is a big controversy with a small market. So it’s really not worth it for a company like General Mills to become a symbol of Israeli occupation,” said Baum. “I think they didn’t have a choice and they found a good way forward.”

The fact that Ben & Jerry’s decision leaves the company vulnerable to anti-BDS legislation while General Mills’s does not underscores how such legislation targets company speech, not just company activities. When I wrote about New York anti-BDS legislation’s targeting of Ben & Jerry’s in this newsletter last fall, Brian Hauss, a staff attorney with the ACLU Speech, Privacy, and Technology Project, told me, “The government is essentially punishing Ben & Jerry’s for speech. If they pulled out of the West Bank for economic reasons, the government wouldn’t be doing anything about it. It’s only because Ben & Jerry’s said ‘We have moral concerns’ that the action is triggered.” Lara Friedman, president of the Foundation for Middle East Peace (and a Jewish Currents contributing writer), said that anti-BDS advocates, including supporters of anti-BDS legislation, are clearly concerned when companies take an explicit political position. “They care about the political implications of a statement that says, ‘We have a disagreement with Israel and its politics in its West Bank,’” she said. Often, Friedman noted, companies attempt to boycott only the occupied territories while continuing their operations in the rest of Israel, but anti-BDS campaigners seem to find that especially enraging. “The act of making a distinction is what pisses people off,” she said. Airbnb, for example, was forced to reverse its policy of not listing rentals in the settlements in 2019 after facing global backlash.

Indeed, Israel’s own anti-boycott legislation, which sanctions companies and citizens that promote boycotting the West Bank, makes it particularly difficult for companies to continue to do business within Israel’s 1948 borders while pulling out of the settlements. Even if General Mills decided to cut ties only with its settlement factory while maintaining its stake in the rest of its Israeli venture, Israeli regulations might make that difficult if the company was perceived as boycotting the settlements, Baum said. (General Mills has said it will continue to sell its products in Israel, even if it will not produce anything there.) “Many of these laws were pushed by the settler lobby to present all criticism of settlements as an attack on Israel and its legitimacy,” said Baum. “They have been very successful. Any act that would be seen as distinguishing between Israel and the occupied territories is considered to be a discriminatory attack and is penalized in Israel.”

In Kansas, Arizona, and Texas, courts have struck down anti-BDS legislation requiring public employees to pledge not to boycott Israel on the precise grounds that such legislation violates the First Amendment right to political speech. In response, the states have amended their legislation to apply only to companies employing more than ten people whose state contracts are worth more than $100,000, so that the laws no longer apply to the independent contractors that had successfully challenged the legislation in court. Lawsuits challenging prohibitions on larger companies’ ability to boycott and divest from Israel are still making their way through the courts. In February, a federal judge in Texas ruled that an engineering firm’s free speech rights would be violated if a state contract required them to pledge not to boycott Israel. Today, however, in an Arkansas case, the full Eighth Circuit Appeals court appeals panel ruled that anti-BDS legislation does not violate the First Amendment because companies’ commercial decisions are not considered “expressive conduct.” The ACLU has announced its intention to appeal the latter case to the Supreme Court.

Baum said that even if General Mills isn’t taking a vocal public stance in support of BDS, the company’s actions are still a win for the movement: “That sends a very clear message to other companies that in the end it is not profitable to do business on occupied land. It’s okay that it is not a moral decision—it might be even better.” 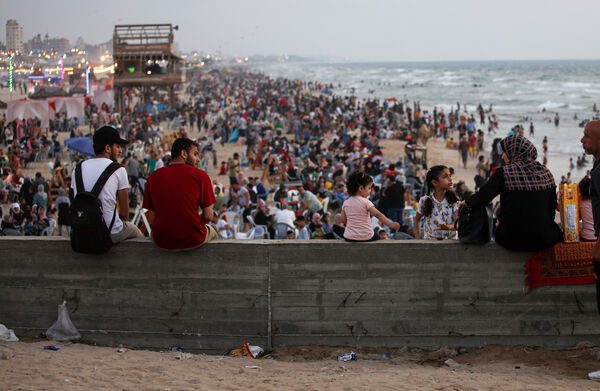 June 17th, 2022: Hundreds of Palestinians gather on Gaza’s beach to cool off. This is the first summer in years in which Gazans have full access to the beach. Previous years brought restrictions due to the Covid-19 pandemic and the 11-day Israeli offensive last year. The water provides welcome relief from the heat in the besieged Gaza Strip, where residents suffer from a chronic electricity shortage and poor housing.