For this week’s newsletter, we wanted to share two items with you, both of which were posted to the Jewish Currents website this afternoon. The first is a reaction to the horrific massacre in Buffalo on Saturday from JC Contributing Writer Rebecca Pierce, who challenges American Jewish institutions to move beyond expressions of solidarity with Black victims of white supremacist violence and to take active responsibility for their own complicity. The second is a letter from a group of reproductive rights organizers in New York responding to Editor-in-Chief Arielle Angel’s newsletter from two weeks ago in the wake of the leaked draft Supreme Court opinion overturning Roe v. Wade. Both are linked below, and I encourage you to click through! 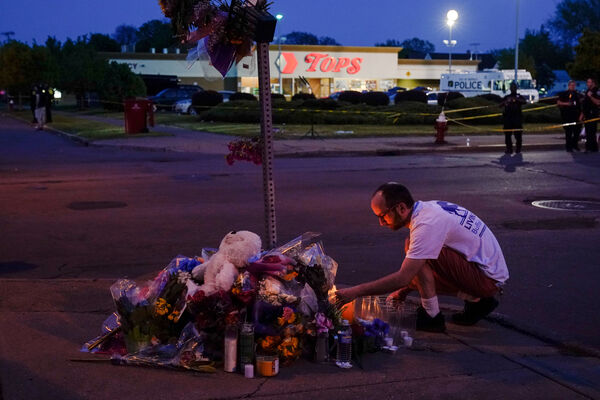 A person pays his respects at a makeshift memorial outside the scene of a shooting at a supermarket in Buffalo, New York, May 15th, 2022.

Shared Grief Is Not Enough

After the Buffalo massacre, Jewish institutions must confront their own complicity with white supremacy.

Over the weekend, a white supremacist murdered ten people in a mass shooting at a grocery store in a predominately Black and low-income neighborhood in Buffalo—a chilling reminder of the constant threat of racial violence that underpins American society. For Black Americans, the killing of Ruth Whitfield, Roberta Drury, Aaron Salter, Heyward Patterson, Pearl Young, Geraldine Talley, Celestine Chaney, Katherine Massey, Margus Morrison, and Andre Mackneil reflects an unspeakable grief that has endured for our entire time on this continent. It is the grief of Tulsa’s Greenwood neighborhood, burned to the ground in 1921; it is the grief the 2015 Emanuel African Methodist Episcopal Church shooting in Charleston; it is the grief of loved ones stolen by slavery, prisons, gun violence, police brutality, and lynching. It is a grief unique to our experience in this country, and yet simultaneously shared by every other marginalized group that finds itself in the crosshairs of white nationalist violence. For many Jewish Americans, the antisemitism also inherent in these incidents is undeniable. The shooter not only espoused “great replacement theory”—a white nationalist ideology that blames Jews for encouraging nonwhite immigration to subvert the white race—he also scrawled the name of the shooter who massacred 11 Jews at the Tree of Life synagogue in Pittsburgh in 2018 on the barrel of his gun.

The anti-Black massacre comes at a time when the Republican Party, which at this point is all but openly far-right, is turning up the heat on many marginalized communities—banning critical race theory in schools, suppressing Black and Brown voters, dismantling reproductive rights, and passing anti-trans legislation in a number of states. Ideas like replacement theory aren’t only the province of avowed white nationalists; by now, they have been embraced by almost half of rank-and-file Republicans, fueled by anxieties over demographic changes in the United States and espoused by high-profile right-wing media voices like Fox News’s Tucker Carlson. Even with a Democrat in the White House, white nationalism is no less a threat than it was when Donald Trump was president, and systems of oppression seem to be coalescing faster than the movements against them can come together in opposition. 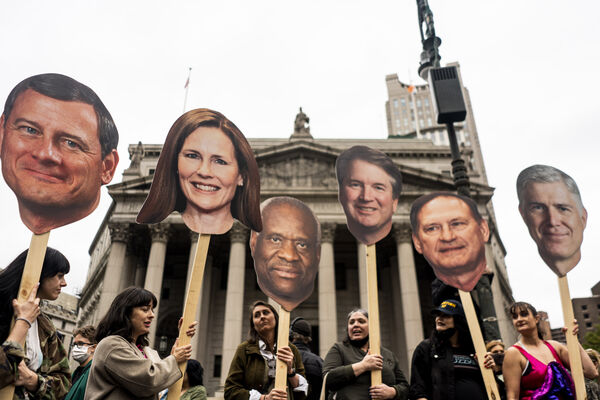 In a recent essay on the state of abortion and reproductive justice organizing, Arielle Angel bemoans a depressingly tame rally held at Foley Square the day after the leak of the Supreme Court memo, offering up a “fantasy in which leftists and liberals band together to suspend business as usual. Clinic defense, yes, but also, offense. Occupy the statehouses in all 50 states! Withhold our labor—a general strike!” From Foley Square to general strike—and what of the steps in between? Angel briefly mentions the work of grassroots reproductive justice organizations in red states to point to the fact that things are indeed happening, but is conspicuously silent about the substance of this organizing and the fact that it is present in blue states as well. Despite her concern for questions of left-wing renewal, she ends up overlooking a key question that the reproductive justice movement is grappling with: How, along with other militant struggles confronting repressive state and class power, can we constitute an emergent bloc that could in fact break through the liberal holding pattern?

For decades, the grassroots reproductive justice movement has been challenging the narrow framework that understands abortion as a matter of individual privacy, arguing instead that attacks on abortion and reproductive freedom are about social and political control. There is no “right to choose” without the material and political capacities to nourish those choices. There is no “right to choose” without the autonomy of women, Black, Indigenous, and people of color, queer and trans people, young people, and other groups whose empowerment threatens a heteropatriarchal, racist, capitalist order. As SisterSong originally put it, reproductive justice is the right “to maintain personal bodily autonomy, have children, not have children, and parent the children we have in safe and sustainable communities.” This expansive framework also encompasses the right to vote; access to health care, decent work, affordable housing, and education; freedom from racist violence; and more.

Click here to read the full letter to the editor