The embattled prime minister hopes a strike on Gaza will help him form a unity government. 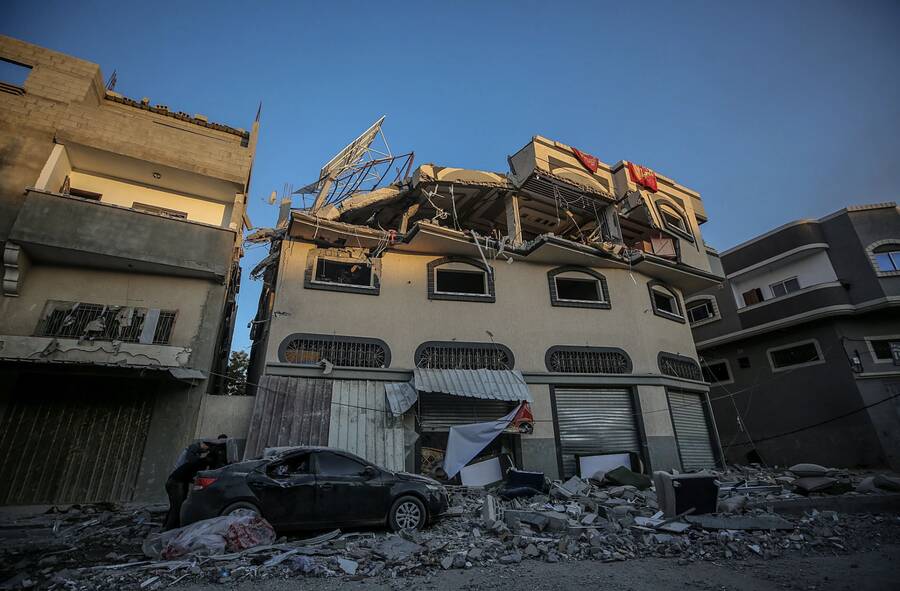 THERE IS NO military solution in Gaza. But Israel’s leaders, who are too much at loggerheads to sit in a government together, are somehow able to agree that when it comes to maintaining Israel’s 12-year siege, there is only room for violent tinkering.

That violence was on full display early Tuesday morning, when Israel assassinated Islamic Jihad commander Baha Abu al-Ata in his Gaza home while he slept; the projectile also killed his wife and wounded his four children. Meanwhile, the son of another Islamic Jihad leader was killed in a separate strike, widely attributed to Israel, in Damascus overnight. Prime Minister Netanyahu said the targeted assassination of Abu al-Ata, which Israel refers to as a “surgical strike,” was a necessary pre-emptive measure to stop what he termed a “ticking time bomb.”

Few Israelis were aware of Abu al-Ata until a few months ago, when military intelligence accused him of orchestrating a number of rocket attacks on southern Israel and of planning several more, breaching the ceasefire agreements negotiated between Israel and Islamic Jihad’s rival political group, Hamas.

The Israeli army rarely takes credit for initiating a military confrontation with Gaza. Usually, the political and defense establishments pin the blame on Palestinian terror groups for firing rockets indiscriminately into Israeli territory. Israel, according to its own narrative, retaliates only when provoked.

Islamic Jihad militants responded to al-Ata’s assassination by firing over 190 rockets into southern and central Israel, paralyzing nearly half the country. The Israeli Air Force launched attacks on what it said were a number of Islamic Jihad targets, killing at least six Palestinians and wounding 30. As of this writing, Hamas and Islamic Jihad announced that the “real response” to al-Ata’s killing had yet to begin.

Israeli commentators were quick to point out that al-Ata’s assassination was reminiscent of that of Ahmed Jabari, the former second-in-command of Hamas’ armed wing who was killed by Israel seven years ago this week. Jabari’s killing was also followed by rocket attacks, which precipitated Operation Pillar of Defense. More than 100 Palestinians and two Israeli soldiers were killed in that military operation.

At a press conference held Tuesday morning, IDF Chief of Staff Aviv Kochavi, flanked by Netanyahu and Shin Bet head Nadav Argaman, said that al-Ata was responsible for undermining Israel’s ceasefire efforts with Hamas, and that they had chosen to carry out a targeted killing only after previous efforts to stop him had failed. In September, the security establishment and Attorney General Avichai Mendelblit blocked Netanyahu’s order to carry out a targeted assassination of a then-unknown figure during the run-up to the election.

“We are not interested in an escalation, but we are ready—on the ground, in the air, and at sea. If necessary we will return to our policy of targeted assassinations,” Kochavi told the reporters.

Al-Ata is the second Palestinian militia commander to die in an extrajudicial killing this year alone. In May, the IDF assassinated Hamed Ahmed Khudary, a Hamas field commander who was allegedly responsible for transferring funds from outside Gaza to militant groups inside the strip. After refraining for years from using aerial attacks to assassinate Palestinian leaders in the occupied territories, the unanswered question is why the security establishment suddenly decided to eliminate two “ticking time bombs” in less than six months, and whether al-Ata posed such a threat that killing him was worth the price of another cycle of violence.

The timing of this assassination also raises questions. Netanyahu has long been accused by critics of exacerbating or initiating military operations as an escape route from his political or legal quagmires. He is facing indictments for corruption, and probably prefers the prospect of dealing with that as the prime minister of a unity government, rather than during a third election campaign or while sitting in the opposition. That’s where his political rival Benny Gantz, head of the Blue and White party and former IDF Chief of Staff, comes in.

Gantz is facing enormous pressure to form a unity government with Netanyahu in order to avoid a third election, while simultaneously trying to dodge criticism by the Israeli right over the possibility that he might form a minority government backed by the Joint List. (Less than 24 hours before al-Ata’s assassination, Netanyahu tweeted a three-month old video of Palestinian MK Ahmad Tibi saying that his party would leave the government if Israel started bombing Gaza). Netanyahu, then, hopes the security situation will be the key to the former IDF chief of staff’s heart.

Gantz sees eye-to-eye with the prime minister on security issues, particularly on Gaza. When he launched his election campaign earlier this year, the Blue and White leader presented as one of his credentials a boast about how many Palestinians he killed during the 2014 war. Few, then, were surprised when he released a statement on Tuesday praising the IDF for making “the right decision,” adding that he had received updates on the strike before it was carried out. “Blue and White will support any justified action taken to keep Israel safe, and we place the security of our residents above politics,” Gantz said.

Even as Israel is becoming chronically unable to form a government, the “Gaza consensus”—the endless pounding of the strip into oblivion—persists, and could tip the scales in Netanyahu’s favor.

But try as they might to create consensus, Israel’s leadership will sooner or later have to reconcile with the fact that there is no military solution to the siege. The notion that Israel can simply take out militants, bomb people into submission, cut down hundreds of protesters on the Gaza fence, or turn the blockade into the most excruciatingly permanent feature of Israel’s five-decade military dictatorship, is a chimeric one. And it is precisely the kind of deceit that is dangerous for both Palestinians who are cut off from the world and relegated to a life of perpetual violence and destitution, and Israelis who want to live and make sure their children come home safe.

Edo Konrad is the editor-in-chief of +972 Magazine.