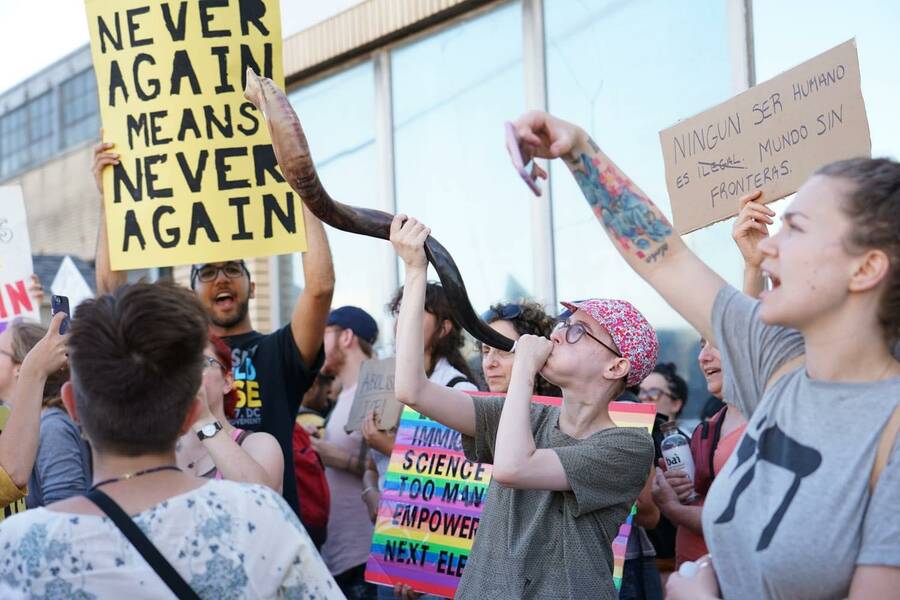 ON JUNE 30TH, a group of around 200 protesters—most of them Jewish—blockaded an ICE detention center in Elizabeth, New Jersey. In the week that followed, similar protests sprung up in cities around the country, from Philadelphia to San Francisco, decrying the unsanitary and deadly conditions in the detention centers along the US–Mexico border. The protests were rooted in the language of Holocaust memory—protesters carried signs with messages like “Never again means now,” and “Never Again Para Nadie” (“never again for anyone”). To date, the decentralized effort, organizing under the banner of Never Again Action, has held affiliated protests in Los Angeles, New York, Rhode Island, Philadelphia, Boston, Chicago, San Francisco, and Washington, DC, with upcoming events planned for Grand Rapids, New Hampshire, Atlanta, and on the National Mall. Hundreds of participants showed up at many of these rallies—Boston alone drew over a thousand—and in at least five separate actions, dozens were arrested for civil disobedience.

The protests were set off, in part, by what some organizers call the “weaponizing of Jewish trauma” after politicians and Jewish organizations such as the Republican Jewish Committee, the Anti-Defamation League, and even the United States Holocaust Memorial Museum condemned Rep. Alexandria Ocasio-Cortez for referring to the ICE facilities as “concentration camps.” In response, organizers on the Jewish left felt the need to express support for ICE detainees, and began to brainstorm possible actions. To hear the organizers tell it, the initial rallying cry came from a simple Facebook status.

“One person, Serena [Adlerstein], who is a volunteer organizer with [immigrant-rights group] Cosecha and is Jewish, posted a status on Facebook basically saying, ‘Hey, Jews, what are we going to do about the concentration camps at the border,’” says activist Alyssa Rubin. Rubin, one of the organizers of the first Never Again action in New Jersey, had experience organizing with immigrant rights groups and activists on the Jewish left, but still seemed surprised by the strength of the initial response: “We decided to post a Google form and 650 people signed it. We realized, ‘Wow, there’s a lot of energy here.’” This led to the creation of a Facebook event heralding a “Jews Against ICE Week of Action.” The page reads: “As Jews, we’ve been taught to never let anything like the Holocaust happen again.”

Social media has been crucial to galvanizing and orchestrating this decentralized effort. For many of the activists involved in the actions that followed the rally in New Jersey, those first few posts were a lightning rod, setting off a wave of local organizing. “I saw a lot of different friends posting about wanting to do an action around the crisis, not only at the border, but everywhere, in our communities,” says Rebecca Oliver, an activist involved in Monday’s Chicago rally. “I got pulled in pretty quickly.”

But as Michaela Caplan, a Boston-based activist who was involved in both the New Jersey and Boston actions, points out, the success of the initial call to action is indebted to preexisting networks of Jewish and immigrant activists. “We’re organized already, because of other movements that we’re involved with,” she says.

Rubin notes that a formal connection between activists on the Jewish left and immigrant rights activists existed long before Adlerstein’s Facebook post: Many of the activists initially met through Momentum, a movement incubator and training institute, which provided support to Cosecha as well as the anti-occupation group IfNotNow. “The movements were founded around the same time, and we often talk about Cosecha as being our sister movement,” she says. “Even when we’re not working on the same issues, we often support each other in material, tangible ways.”

The first communications between local organizers happened over conference calls, with organizers sharing resources including suggested talking points and potential press release formats—what Elliya Cutler, one organizer of the Bay Area action, called a “centralized toolkit.” But despite common messaging and the resonant framing of “never again,” organizers are loathe to define themselves organizationally. “‘Never again’ was never supposed to be a national movement,” Caplan says, “as much as something that resonates deep within Jewish collective consciousness.”

Many of the organizers come from a background of decentralized organizing, says Sophie Ellman-Golan, a New York-based activist who was involved in organizing the Elizabeth action. “We’re not an organization,” she corrects me when I use the term to describe the “Never Again” actions during our phone call. “We don’t really know what we are, but we’re not an organization.” Ellman-Golan herself is versed in decentralized organizing from her involvement in groups like the Women’s March, and she and others have used momentum-building tactics like mass recruitment calls that they learned through organizing with similarly distributed movements.

Organizers told me that the decentralized nature of the movement is essential to demonstrating that ICE, and the draconian immigration policy it enforces, is present throughout the country, not just on the US–Mexico border. The distributed actions also allow for flexibility within local organizing; multiple organizers emphasized that the ability to focus on regional demands strengthens their message.

In Rhode Island, for example, the Never Again action targeted a local, privately run detention center, the Donald W. Wyatt Detention Facility, which had recently renewed its contract with ICE and is currently holding over 100 ICE detainees in its custody. New York Jewish activists joined with the local chapter of Mijente, a Latinx and Chicanx organizing group, to protest in front of the local offices of the surveillance company Palantir, which has contracts with ICE. At the Bay Area action, rather than protest at a detention center (the nearest one, according to ICE’s online materials, is 120 miles east of San Francisco in Yuba City), local organizers decided to protest at the offices of House Speaker Nancy Pelosi, who represents San Francisco, after she and other House Democrats approved a $4.5 billion emergency funding package for the border crisis, effectively providing additional funding for ICE. Chicago’s action targeted Mayor Lori Lightfoot, asking her to declare Chicago a “welcoming city” for immigrants, as well as Illinois Sens. Tammy Duckworth and Dick Durbin, who voted in favor of the emergency spending bill.

“There’s been a lot of resource sharing across the different actions, but I think it was mainly folks that were trying to build from the ground up in Chicago and make sure the action was going to be relevant to Jewish and immigrant communities here,” says Oliver.

Despite the varied goals of the organizers, they were largely united in their desire to support local immigrant-led movements in their region. “We asked the immigrant leaders in Cosecha, ‘What can we do in this moment of energy within the Jewish community to take action? What do you want us to do?’” says Rubin. Asked why her group chose Elizabeth as their first action location, Ellman-Golan notes that a local Cosecha chapter in Elizabeth has been holding actions at that facility for a long time.

Natalie Lerner, a co-organizer of the Rhode Island action, had previously worked with AMOR, a coalition of grassroots immigrant rights organizations across the state, and saw an opportunity to strengthen their message. “We really wanted to build on the work AMOR has already been doing,” she says, “and recognize that this group of Jewish-led folks who protested on Tuesday is not the first group of people that was going to have a protest in this space.”

Though many activists are planning to participate in upcoming Jewish-led protests, such as T’ruah’s annual movement of immigrant solidarity on Tisha B’Av or Jews For Racial and Economic Justice’s (JFREJ) #JewsAgainstICE campaign, the Never Again movement has no plans to centralize, according to Ellman-Golan.

Instead, she and others emphasize that these rallies should be a catalyst to support local immigrant-led actions. Multiple Jewish organizers note that their privilege puts them in a position to reinvigorate a national conversation on these issues. “Given our unique position as Jews, where our trauma is for whatever reason more legible than other groups’ trauma, we will keep using our position to uplift the voices of immigrant leaders,” says Caplan.

Arielle Gordon is a writer based in New York. Her work focuses on cultural criticism and the intersection between popular culture and social justice.