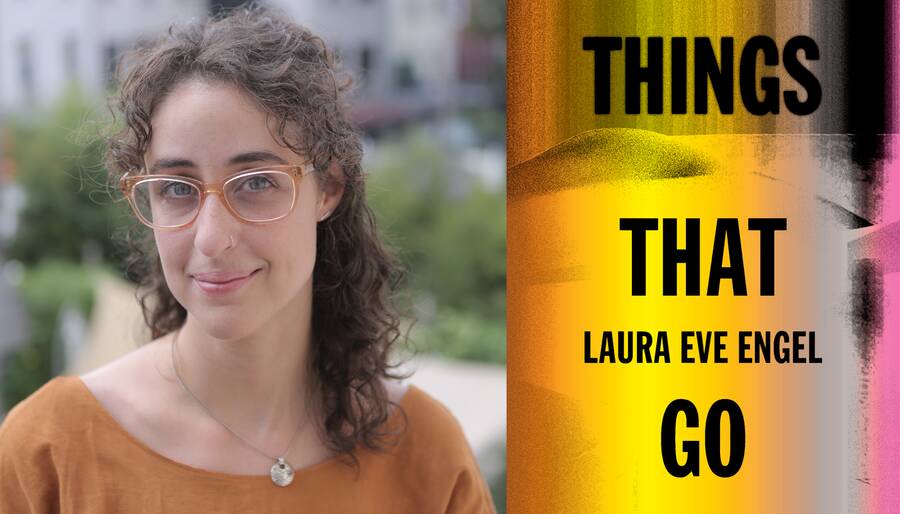 LAURA EVE ENGEL’S DEBUT POETRY COLLECTION Things that Go (Octopus Books, 2018) takes as a point of departure a moment from the Book of Genesis, in which Lot’s wife turns back to see the destruction of Sodom and is turned into a pillar of salt. Through the prism of this ancient and formative story, Engel contemplates the act of looking and its ethics in compact and combustible language, while also addressing our present moment of media oversaturation and the startling nearness of livestreamed, clickable tragedy.

We live in a time—Engel explains in “I Can Watch a Man in a Cage Get Burned Alive,” about Muath Safi Yousef al-Kasasbeh’s 2015 murder by ISIS—where at the press of a button, “I can watch the orange of his jumpsuit go up. / His face, I can make comparisons. I can turn the sound up or off.” The act of watching is fleeting, momentary, but nevertheless indelible: “If I can watch an orange prayer go up in a man’s body / I can never unwatch it.” Engel returns to this video in “Spectator,” demonstrating how “the invasion of a man’s / dying face in my home” is both a startling imposition and an ethical obligation, which one may choose not to take up or one may live with, and through. Informed by the image of Lot’s wife, punished for her attention to devastation, Engel speaks from within the pillar of salt that is a woman horrified, numbed, present for and broken by catastrophe. In Engel’s retelling, Lot’s Wife has become a calcified tear, “a cataract of ideas” that stares at unspeakable destruction and tries to find words for it.

Engel reconstructs our world, abstracting and instrumentalizing elements of natural and built American environments to address moral concerns. Throughout, she introduces other kinds of pillars—skyscrapers, museums and monuments, each cold and static yet teeming with life, each evidence of human ingenuity and folly. At times, her descriptions are almost cubist in their abstraction, as everyday objects become spare geometrical shapes, opening a space for new meanings: “the new billboard / divides the sky from itself.” The buildings in this work do not simply stand firm—they ripple as reflections in water, they split the sky into parts. In this splitting, they resist the phallological urge to read them only as monuments to power or progress.

Trains, cars, and other “things that go” interest Engel for similar reasons; she uses them to subvert the narrative of freedom, movement and progress they so often represent. In Engel’s work, trains and cars speed so steadily that they are like fixed objects, buildings lying flat. And yet, Engel also asserts the greater possibility in these modes of transport, likening their movement to the steady flow of language and time. In this way, Engel offers a critique of things that are stagnant but should be able to move forward, as well as an account of things that do, in fact, go, though perhaps in surprising ways. Throughout the work, Engel contemplates the embodied experience of human thought: “There come with the body and the moment of course all kinds of limitations / Having only one of them, for example,” she writes in “The Lightning Field” with a cool and surprising humor. In this way the body, too, in all its limitations is a vehicle propelled by human reflection.

Engel’s work, though it opens in the ancient desert outside of Sodom, is a reflection of America in our current political and social moment. The stark mundanity of taking out the trash, of working in an office building, gives way to open skies and vast deserts in a dizzying, seemingly effortless attempt to explain an American experience or way of being. For Engel, Americanness today is an experience of living in a divided nation, where the divisions aren’t so much political as they are ethical and existential. In “Burden of Belonging” she writes, “what we are really saying is we’re scared / about how many of us / choose not to recognize / we depend on one another.”

In Things that Go, catastrophe looms, but so does hope. Most of all Engel conveys a humble sense of being present and alive, of trying to find a language of gratitude even when gratitude feels senseless and catastrophe singes the edges of human existence. “Wherever I go I find myself / on my knees before a feeling so big / it’s already been annexed / by the military,” Engel writes in “Home on the Range.” This sense of awe is potent—it is the “thing” that can “go” when everything else seems to have screeched to a halt. This is no small feat; it is the emotional work from which all progress emerges. In this tightly constructed debut, Engel offers startling and brave poetry that does not shrink from the disturbing truths of our time.

Fiction
Father of the Whole World
“So it seemed that I was the only man left in the world.”
Elyash
History
New York’s First-Time Women Voters
A 1918 dispatch from a Yiddish newspaper documents the experiences of women legally voting for the first time.
Miriam Karpilove
Sign up for our email newsletter, featuring exclusive original content
What’s good?
Signup for our weekly Shabbat Reading List for recs on what to read—and why.