Lessons From Across the Pond

What British Jews can learn from the American Jewish left. 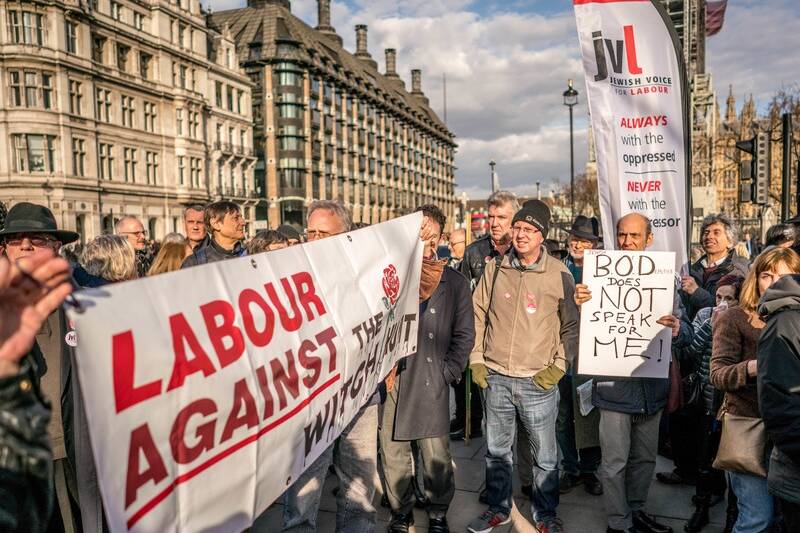 THERE IS A LOT OF ANXIETY in the British Jewish community right now. British Jews are concerned and divided over the growing perception of antisemitism on the left, particularly in the leadership of the Labour Party. While many of our communal conversations parallel those being held in the United States—regarding Israel’s place in our communal identity, the rise of the far right, and the place of Jews in leftist movements—there are also important differences. In the first place, the history of antisemitism in Britain runs far deeper than in the US, and is far more entrenched in the political culture, speaking to a critical need for political education around antisemitism. But there are also vital new left-wing Jewish movements undertaking this work in the US that, as yet, have no real counterparts in Britain. These movements offer British Jews a model for how to prevent fears of persecution from being weaponized against us, and against the progressive political landscape we want to create.

When Jeremy Corbyn was elected leader of the Labour Party in 2015, there was almost instant concern within the Jewish community. Some of this concern is justified. Corbyn has defended a mural painted in east London which depicted stereotypically Jewish-looking bankers playing poker on a table supported by workers; he once commented that British Zionists have “no sense of English irony despite having lived here all their lives”; and just recently, he made headlines for writing the foreword for the new edition of J.A. Hobson’s Imperialism: A Study, which has numerous antisemitic passages. In addition, Corbyn has been an outspoken critic of Israel for most of his career, and while his criticisms are generally legitimate, some of his most emphatic supporters have been known to express antisemitic tropes in the context of defending Palestine.

British Jews overwhelmingly feel that Labour’s response to addressing antisemitism within the party has been woefully inadequate, and that Jews are being made to feel unwelcome in a party that has a long tradition of standing up to antisemitism and racism. In a recent poll by Survation and the Jewish Leadership Council, 86% of Jewish adults felt that there was a “serious antisemitism problem” in the party. The official Labour affiliate Jewish Labour Movement (JLM) passed a no confidence motion regarding Corbyn’s leadership during their most recent annual general meeting.

It has also provided an opportunity for Tory and centrist members of Parliament to present themselves as “friends of the Jews” for their own political gain. Watching right-leaning politicians and communal institutions cynically manipulate the real fears of Jews about our place in British society has done nothing to quell our discomfort and frustration. The passion with which so many politicians seem to be speaking about the scourge of antisemitism on the left is born of politically expediency, not genuine concern for our wellbeing.

At the same time, the British Jewish establishment has taken Labour’s controversies as an opportunity to reassert itself as the sole voice of the community. They have held “Enough is Enough” rallies in Parliament Square; they have used the International Holocaust Remembrance Alliance’s definition of antisemitism, which contains language that conflates antisemitism with legitimate criticism of Israel, as a litmus test for members of Parliament; and they have released dozens of public statements over the last three years condemning Labour’s antisemitism problem. Organizations like the Board of Deputies of British Jews, much like the Jewish Federations in the US, are enabling an environment within the community that holds supporting Labour or leftist values as incompatible with being part of the Jewish community—encouraging a toxic communal discourse that regards Jews who remain in the Labour Party or on the left generally as self-hating “court Jews.”

But the current political chaos over Israel, antisemitism, and the left presents a long overdue opportunity for British Jews to do the work of reexamining our relationship to Israel, disentangling Zionism and Judaism, and deconstructing how contemporary antisemitism works in order to more effectively fight it. To this end, looking across the pond at the work of progressive American Jewish organizations provides a welcome model.

Both from observing the types of actions taking place in America, and from speaking to Jewish leftist activists and academics in the US, I have identified some key lessons for British Jews. Organizations like IfNotNow, Jews for Racial and Economic Justice (JFREJ), Jewish Community Action (JCA) and other American Jewish leftist organizations have clearly identified the right’s weaponization of antisemitism to further an agenda that attacks the issues and values Jews on the left hold dear. To them, combating antisemitism is not just about making Jews safer; it’s about recognizing how antisemitism is used to delegitimize the left.

While these groups do not yet represent the mainstream, they have made crucial headway in challenging the American Jewish community—and its stagnant institutional leadership—on established norms in public discourse about Israel and antisemitism. By unapologetically positioning themselves on the side of justice, they have drawn clear links with other social movements—as they did this past weekend at a solidarity action at an ICE detention center in New Jersey—thus investing Jews in the struggle for the rights of all minority groups.

Many of the young Jewish left-wing activists in the US have shown strong support for Ilhan Omar, the Somali-American congresswoman who has been targeted both by Republicans and fellow Democrats due to her criticism of Israel. Their analysis makes room for an understanding that Islamophobia and antisemitism are linked; situating antisemitism within the wider struggle of dismantling white supremacy has given these young Jewish activists the tools to build durable political alliances and to break with the unjust status quo. It’s a conversation desperately needed in the United Kingdom, where our own Jewish establishment is so focused on the Labour Party that it is virtually ignoring the urgent threat of right-wing white nationalism that is growing in strength across Britain and the rest of Europe.

While left-wing antisemitism dominates the news, racism toward Muslim communities remains a huge problem across all parts of British society. Given our shared experiences with discrimination and oppression, the Jewish community should feel solidarity with our Muslim siblings who continue to be targeted both by mainstream government policies like Prevent (which places a legal duty on public institutions to report individuals they consider at risk of extremism, and which disproportionately targets Muslim communities), and by populist grassroots racist movements like UKIP and the English Defence League.

This is not to say that the British Jewish community is not engaged in goodwill efforts regarding its Muslim neighbors—several social action programs already exist in the British Jewish community, with a particular focus on refugee support programs. Many shuls operate asylum-seeker drop-in centers, and vulnerable adults’ shelters and food drives are also commonplace. There are also a number of examples of positive interfaith dialogue and engagement between Muslim and Jewish community groups in Britain. But what is lacking is a political analysis that identifies the core issues—racist immigration policies, austerity, and misogyny—that underlie the need for these programs in the first place.

That’s why JFREJ’s work on ending police violence, for example, strikes a chord with those of us in Britain who feel politically homeless when it comes to justice work. Recent initiatives like asylum-seeker drop-in centers or homeless shelters have only a limited efficacy when they fail to challenge the oppressive and violent ideology that underpins the Tory government’s policies. For many young Jews, the liberal tendency to depoliticize what are inherently political issues is at best annoying and at worst ostracizing.

Of course, there are exceptions to the vacuum in British Jewish political organizing. Jewdas, a Jewish diasporist, anarchist collective that made headlines last year after inviting Corbyn to their annual seder, has consistently been committed to anti-racist campaigning, regularly participating in anti-fascist demonstrations or supporting migrant justice inititiatives over the years. Yet their views are largely condemned by the Jewish establishment because of their commitment to non-Zionism, which threatens the core identity of the Jewish establishment. While this is true of non-Zionist groups in the US as well, the British Jewish community is much smaller and less secure than the American Jewish community, and has far less space for new progressive movements to flourish.

The mainstream British Jewish community must work to build networks of solidarity with other minority communities in the UK. It must also account for the intersecting experiences of members of our own communities: Jews of color, queer Jews, and Jews with different abilities are all left behind when the establishment allies with politicians who have systematically eroded legal rights, slashed welfare benefits, and locked migrants up in detention centers.

Earlier this month, a Tory leadership candidate (and potential future prime minister) thought it appropriate to compare Corbyn to Hitler. With Steve Bannon and UKIP’s Nigel Farage working closely together to advance the far right across Europe, now is the time for the British Jewish community to be more vigilant and more discerning about who we see as our allies.

Spreading fear and division among minority communities is one of the oldest tricks of the right. Progressive Jewish groups in the US are showing us how to successfully develop greater solidarity with other minority communities across the UK. If we’re going to prevent the toxic discourse surrounding antisemitism from being used to derail and delegitimize the left’s work, we must begin organizing toward powerful left-wing Jewish movements.

Emily Hilton is a Jewish activist and writer based in London. She is a co-founder of Na’amod UK: British Jews Against Occupation, as well as a trip leader and organizer with the Centre for Jewish Non-Violence. She has written for The Independent and +972 Magazine.