Justifications for Destroying a People 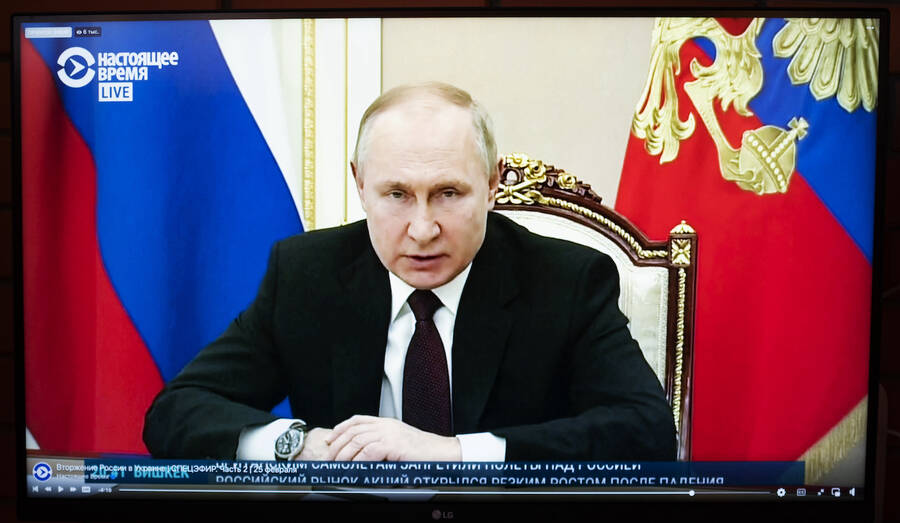 In the days since Russia launched its full-scale invasion, Ukrainians and their supporters have been lionized for the same forms of resistance to oppression for which Palestinians are routinely condemned. Western television networks have approvingly broadcast video of Ukrainians assembling Molotov cocktails. Governors who signed legislation penalizing boycotts of Israel have promoted boycotts of Russia. When Secretary of State Antony Blinken announced last month that he would join a session of the United Nations Human Rights Council because “Russia’s invasion of Ukraine underscores the Council’s mission to promote human rights and respond when they are violated or abused,” the Palestinian American writer Yousef Munayyer noted that the US had left the Council because it “didn’t want to see accountability for human rights abuses and violations of law committed by Israel.”

Late last month, a tweet circulated that purported to show a Ukrainian girl confronting a Russian soldier. It called the girl’s behavior “courageous” and included the words “Pray for Ukraine.” The Palestinian American journalist Mariam Barghouti noticed the error. “This is Ahed Tamimi,” she wrote, “a Palestinian standing up to an Israeli settler soldier trying to steal the lands of her family in Nabi Saleh . . . She is indeed brave. Just not Ukrainian.”

In mainstream American discourse, Ukrainians, a mostly white and Christian people battling an American foe, are viewed as fully human, and thus entitled to fight for their freedom. Palestinians, a mostly nonwhite and non-Christian people battling an American ally, are not. The irony is that the arguments Russia’s government deploys to dehumanize Ukrainians are strikingly similar to the ones Israel’s government uses to dehumanize Palestinians. For Vladimir Putin, Ukrainian peoplehood is invented, weaponized, and genocidal, which is how Israeli leaders have long described Palestinian peoplehood. In both cases, this three-part claim—that a neighboring people is not really a people, that it is controlled by foreign foes, and that it seeks your extermination—justifies aggression and the brutal denial of human rights.

In Putin’s recent speeches and essays about Ukraine, a narrative emerges. It starts with the assertion that Ukrainians are not a genuine people. On February 21st, in the speech in which he formally recognized the independence of the separatist enclaves that Russia cleaved from Ukraine in 2014, Putin insisted that Ukraine “never had stable traditions of real statehood.” To the contrary, “since time immemorial, the people living in the south-west of what has historically been Russian land [i.e. Ukraine] have called themselves Russians,” he claimed.

For Putin, Ukrainian identity is a fiction created to menace Russia. In his now-notorious 2021 essay, “On the Historical Unity of Russians and Ukrainians,” Putin alleges that, today, the “patriot of Ukraine is only the one who hates Russia. Moreover, the entire Ukrainian statehood, as we understand it, is proposed to be further built exclusively on this idea.” As Putin tells it, Ukrainian is an entirely negative identity, built entirely on hostility to Russia.

In Putin’s view, most so-called “Ukrainians” oppose this artificial and hateful nationalism. “Ukrainization,” he writes in the essay, “was often imposed on those who did not see themselves as Ukrainians.” Who masterminded this fabrication? Russia’s enemies in the West, especially the United States. The current government in Kyiv, Putin argues, is under “direct external control” and serves as “a tool in someone else’s hands to fight against us.”

Putin’s final claim is that this American-led plot poses an existential danger. In his February 24th speech declaring a “special military operation” in Ukraine, he argued that America’s control over Ukraine “is not only a very real threat to our interests but to the very existence of our state.” As evidence, he cited the current “genocide of the millions of people” in Ukraine who oppose this Washington-backed conspiracy. History, he insisted, is repeating itself: In manufacturing an independent Ukraine, the US is reviving the ideology that threatened to eliminate Russia in the 20th century: Nazism. “The leading NATO countries,” he argued, “are supporting the far-right nationalists and neo-Nazis in Ukraine.” Putin accuses Ukraine’s neo-Nazi government of seeking “to kill innocent people just as members of the punitive units of Ukrainian nationalists and Hitler’s accomplices did during the Great Patriotic War,” the Russian name for World War II. And he tells Ukrainian soldiers that “Your fathers, grandfathers and great-grandfathers did not fight the Nazi occupiers and did not defend our common Motherland to allow today’s neo-Nazis to seize power in Ukraine.”

For Putin, then, Ukrainian peoplehood is artificial, manipulated by foreign foes, and annihilationist. This is also how Israeli leaders have long described Palestinian peoplehood. In 1969, then prime minister Golda Meir declared that historically, “There were no such thing as Palestinians.” Benjamin Netanyahu echoed that in his 2000 book, A Durable Peace, in which he argued that before Zionism, “there was no such people as Palestinians, with a national consciousness, or a national identity, or a conception of national interests.” Yair Wallach, a Senior Lecturer in Israeli Studies at SOAS University of London, told me that after Israel recognized the Palestine Liberation Organization (PLO) at the beginning of the Oslo Accords, Israeli leaders grew more comfortable using the term “Palestinian”—as opposed to “Palestinian Arab” or merely “Arab”—to describe Palestinians in the West Bank and Gaza Strip. But according to a 2018 article in Haaretz, Jewish Israelis still “refer to Palestinians as ‘Arabs’ more than they do as ‘Palestinians’” in popular discourse. And barely any Israeli leaders apply the term “Palestinian” to the Palestinian citizens of Israel, who they generally call “Israeli Arabs.”

Official Russian and Israeli discourse differs in at least one important way. Putin argues that Ukrainians are really Russians, who must be dominated and absorbed. Meir and Netanyahu never argued that Palestinians are really Israelis or Jews. They argued instead that Palestinians are generic Arabs, who Israel could thus encourage to resettle elsewhere in the Arab world. This difference notwithstanding, Israeli leaders depict Palestinian identity as not merely fake, but manipulated by Israel’s enemies, which is what Putin says about Ukrainian identity. For decades, prominent Israelis accused Arab regimes of creating a fictitious Palestinian people to wield against the Jewish state. In 1989, Prime Minister Yitzhak Shamir argued that, “The Arab countries . . . used to talk about throwing us into the sea.” Now “they have become more sophisticated” and talk about “self-determination for the Palestinians.” In A Durable Peace, Netanyahu calls the PLO “a Pan-Arab Trojan horse.” These days, with Arab governments less hostile to Israel, Israeli leaders finger Iran as the outside power that weaponizes Palestinian identity for its own nefarious ends. Israel’s current prime minister, Naftali Bennett, often uses the metaphor of an octopus, whose head is in Tehran. The Palestinians in Gaza are merely one of the “Iranian tentacles.”

Finally, Israeli leaders, like Putin, describe this process, in which foreign powers construct and manipulate an invented nation, as an existential threat to their country. Not only is Ukrainian nationalism a neo-Nazi project; Palestinian nationalism is too. From referring to Israel’s retreat to the pre-1967 lines as “Auschwitz borders” to describing a Palestinian state that expelled Jewish settlers as “Judenrein” to claiming that the Mufti of Jerusalem convinced Hitler to launch the Holocaust, Israeli politicians and commentators routinely link Palestinianism and Nazism. In 2018, as Palestinians marched towards Gaza’s borders in an attempt to return to the lands from which their families were expelled, Yair Lapid, Israel’s current foreign minister, declared that “The Hamas charter repeatedly calls for the genocide of the Jews, and these riots were another element in Hamas’ attempts to destroy the State of Israel.” Hamas’ original 1988 charter did call for a “struggle against the Jews” in which the “enemy” must be “vanquished.” And the group, like other Palestinian factions, has launched violent attacks, thus stoking Israeli fears. But Hamas has neither carried out, nor tried to carry out, an anti-Jewish genocide. Jews like Haaretz reporter Amira Hass and Harvard scholar Sara Roy have lived for long stretches of time under its rule, disproving claims that what motivates Hamas is simply a desire to kill Jews. The group revised its charter in 2017 to declare that its “conflict is with the Zionist project not with the Jews because of their religion.”

There’s a similarly miniscule kernel of truth in Putin’s claim that neo-Nazis run Ukraine. Until 2015, the US banned aid to the Azov Battalion, a militia integrated into the Ukrainian military, on the grounds that it welcomes neo-Nazis. A report last year by Human Rights Watch warned that “Ukrainian authorities and security services frequently ignore or minimize the threat of violence by far-right nationalist groups.” But it’s a grotesque distortion to claim that Ukraine, a liberal democracy with a Jewish, Russian-speaking, president, is run by neo-Nazis seeking to exterminate anyone who identifies as Russian.

What makes both the Russian and Israeli government’s narratives so Orwellian is that they depict as genocidal the very populations on which they are inflicting massive violence. The historian Timothy Snyder has suggested that by providing a pretext for his government’s invasion, “Putin’s atrocity talk leads to atrocities.” The same could be said of Yair Lapid. In 2018, while Lapid was warning that the mostly unarmed Palestinians marching to Gaza’s borders were planning a genocide, Israeli forces killed more than 150 of them and injured more than 10,000. Baselessly accusing a people of committing genocide creates the pretext for horrendous violence.

Recognizing the parallels between Putin’s language about Ukrainians and official Israeli discourse about Palestinians can help Americans recognize that Russians aren’t the only ones susceptible to propaganda that legitimizes aggression. We are too. American Jewish commentators frequently cast arguments for Palestinian equality as calls for Jewish genocide. Prominent Republicans like Newt Gingrich and Rick Santorum have parroted the claim that there are no Palestinians. This denial extends beyond the right-wing and into mainstream thought: To this day, the style guides of America’s most prominent news organizations deny there is a nation called “Palestine,” even though, as The Los Angeles Times’ Adam Elmahrek has noted, Palestine has been a non-member observer state at the UN for more than a decade.

The point of acknowledging the similarities between the Russian and Israeli government’s dehumanizing narratives is not to diminish the empathy many Americans rightly feel toward the brutalized people of Ukraine. It is to extend that empathy to Palestinians, whose brutalization the US government subsidizes. It’s easier to see how Russians fall prey to myths that make them cheerleaders for oppression. It’s harder, but even more essential, to see how Americans do as well.