The Jewish Group Near the Heart of the Canadian Far Right

How the Jewish Defence League found common cause with raging antisemites. 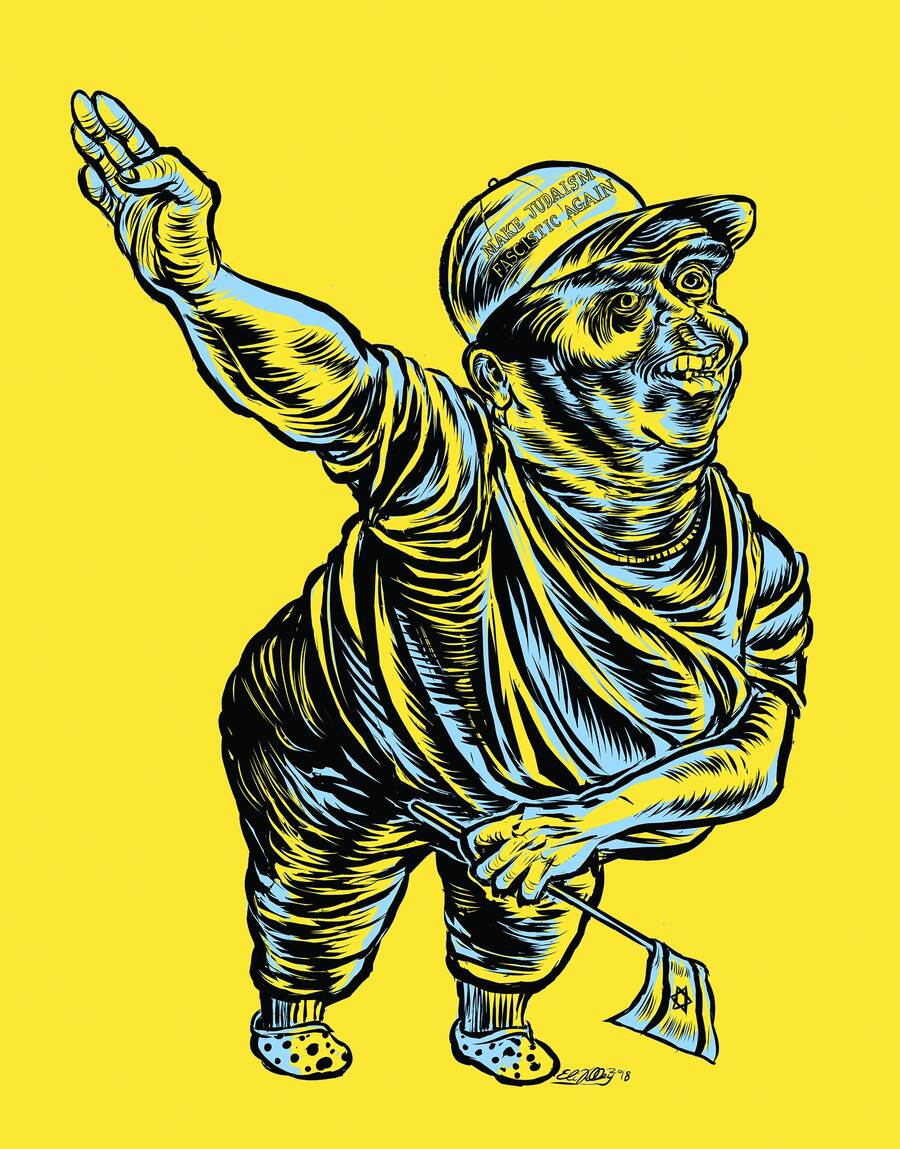 This article appears in our Spring 2018 issue.

IN FRONT OF Toronto City Hall, more than a hundred anti-fascists encircle a Muslim woman who’s holding a microphone. It’s fall, but it’s warm enough for t-shirts. The anti-fascists are anarchists, communists, socialists, labor activists, Jews, and Muslims from several different groups. Some are wearing masks. They have shown up early to counter a rally hosted by far-right organizer Ronny Cameron. It’s being called an anti-Trudeau rally, but it’s put on by the same groups that hold regular anti-Muslim demonstrations (they’re trying to rebrand).

These scenes will be at least somewhat familiar to anyone aware of the rejuvenated far right active across North America, especially since the 2016 American election. From Berkeley to Charlottesville to Toronto, tussles between fascists and anti-fascists act out in miniature the political struggles defining our societies today. The United States has a white nationalist movement and an alt-right movement that hate people of color, women, Jews, Muslims, liberals, LGBTQ+ (particularly trans people), and the media. It’s different in Canada, where the new far right is primarily an anti-Muslim movement. At the center of that movement is the belief that there’s a Muslim conspiracy to take over the West and impose Sharia (Islamic) law through multiculturalism, immigration, and demographic change, and that the Liberal government is either complicit or ignorant of this takeover. The far-right rallies and counter-rallies at City Hall in Toronto—beginning with anti-Muslim provocation and met by anti-fascist activists—occur so often that they’ve become routine.

An American scanning the Canadian scene above would encounter familiar symbols: Christian flags, Make America Great Again hats belonging to both visiting pro-Trump supporters and alt-right Canadians, and even the “Kekistan” flag (Kekistan is an alt-right meme of a make-believe country). But perhaps jarring for one unfamiliar with Canada’s far right is that often, shirts bearing Jewish stars can be seen amidst these other symbols.

It may come as a surprise that a Jewish group holds an influential role in the Canadian far-right movement, which overlaps with the alt-right and antisemitism. The Jewish Defence League (JDL) was founded in the United States by Rabbi Meir Kahane, an extreme nationalist who later became an Israeli parliamentarian, and who infamously called Arabs “dogs” and argued for their mass expulsion. His Kach Party was banned in Israel, and in 1990, Israeli police arrested Kahane for inciting a crowd to try to lynch two Arabs in retaliation for a Palestinian knife attack that killed two Israelis. Later that year, an Egyptian American who would be linked to the 1993 bombing of the World Trade Center shot Kahane to death in a Manhattan hotel.

Less well known than Kahane’s personal story is the JDL’s work in North America. In 2001, two members of the JDL were arrested for planning to bomb a California mosque and a congressman’s office. An FBI report published in 2001 identified the JDL as a “right-wing terrorist group,” though currently the JDL lacks any meaningful public presence in the United States. In Canada, where its members are a common sight at right-wing events, the JDL is not considered a terrorist group by the Canadian government, in large part due to a savvy relaunch.

Back in the 1990s and early 2000s, the JDL primarily targeted neo-Nazis. In 2006, the organization reformed in Canada with the stated purpose of countering anti-Israel groups and demonstrations. The JDL’s new lens is global more than domestic, and it believes that Islam and its practitioners pose the greatest threat to the Jewish people.

The JDL’s relationship with Canadian far-right groups hasn’t always been frictionless. Antisemitism is the fault line in Canada’s anti-Muslim movement. The JDL has some staunchly pro-Israel allies, but many of the leaders and members of the largest and most militant groups in the movement have been exposed as antisemites, and some are tied to neo-Nazism. The alt-right element is often both pro-Israel and antisemitic, arguing that Israel is an ethnostate, and that the white race deserves its own such ethnostate.

In addition to the alt-right, there are also fundamentalist Christians who belong to anti-Muslim groups. They sometimes use the slogan “Deus Vult,” or “God wills it,” a reference to the First Crusade and a call for another crusade in the Middle East—an event that historically touched off mass persecution of Europe’s Jews.

The antisemitism of the Canadian far right has largely gone under the radar because the primary focus of most far-right groups in Canada is fomenting hatred of Muslims. Most groups in the anti-Muslim movement disavow neo-Nazism publically, but they are either unaware of the true beliefs of their allies or turn a blind eye to it. When confronted, they often deny it or cut ties with specific members.

Last spring, photos began circulating that showed the JDL providing “security” at a demonstration alongside neo-Nazi-aligned Soldiers of Odin (SOO), a global, street-level anti-immigrant organization founded by a Finnish neo-Nazi who’d been previously convicted for assaulting immigrants in 2005. When confronted with the photos, Meir Weinstein, the head of the JDL, told a reporter that the SOO had “disowned racism” and instead stood “against radical Islam.”

In spite of the obvious contradictions, the JDL’s involvement has surpassed speech into actual violence. Late last year, a Canadian member of the JDL was charged with a hate crime for an assault that led to the hospitalization of a Palestinian professor protesting at the AIPAC Policy Conference in Washington, DC.

The JDL’s role as a connector for the far right is less violent, but potentially even more significant. As early as 2011, the group was forming relationships with key players in European anti-Muslim street movements like PEGIDA, which now has multiple Canadian chapters, and other think tanks, pseudo-media outlets, and individuals that are influential in the international Islamophobia industry. That year, the JDL held a rally featuring a live video from Tommy Robinson, leader of the English Defence League and founder of PEGIDA UK. The Canadian Jewish Congress, a then-prominent but now defunct Canadian Jewish organization, called the invitation to Robinson “disappointing.” The JDL further hosted an event in 2016 with Paul Weston, a current leader of PEGIDA UK, and in January 2018 it held an event with Pamela Geller, perhaps America’s most well-known anti-Muslim activist.

As the Canadian far right becomes more connected and powerful as a movement, a so-called "lone wolf" has already carried out a horrific act of violence. On January 29th, 2017, Alexandre Bissonnette walked into the Quebec Islamic Cultural Centre and opened fire, killing Ibrahima Barry, Mamadou Tanou Barry, Khaled Belkacemi, Abdelkrim Hassane, Azzedine Soufiane, and Aboubaker Thabti, and wounding 19 others. A student who knows Bissonnette describes him as far-right or alt-right, making this the first murder associated with those groups in Canada and Canada’s first mass shooting at a place of worship.

But Bissonnette is far from a lone wolf, as Canada today has over 100 active right-wing extremist groups. Several newer ones, active on the fringes of the anti-Muslim movement, have strong ties to the white power movement and established neo-Nazi groups. A new generation of self-identifying fascists and so-called nationalists in the alt-right movement are recruiting and radicalizing young men and encouraging them to take real-world action. For now, thankfully, that means putting up posters and going to anti-Muslim demonstrations, but who’s to say this radicalization won’t turn violent?

A year after the mosque shooting, Canada’s Muslim community still feels threatened, and with good reason. A Quebec town has voted against a proposed Muslim cemetery, street-level anti-Muslim groups still hold regular demonstrations, and the Quebec government refused requests to name the anniversary of the mosque shooting as a day of action against Islamophobia.

Both the alt-right and anti-Muslim movements are mainstreaming their hate, pushing discrimination and racism into regular discourse, and in turn creating more opportunities for radicalization. Including the Quebec mosque shooting, the alt-right ideology is responsible for 43 murders and 67 injuries in the USA and Canada between 2014 and the end of 2017, according to a new report published by the Southern Poverty Law Center.

The normalization of hateful attitudes doesn’t just subject our neighbors to repeated discrimination, it has a body count.

A robust government response to this rising tide of bile is necessary, but instead this political period is marked by both the outright embrace of hateful ideologies from the White House and insufficient action from Ottawa. In the absence of support from their governments,  local communities and activists are stepping up to the challenge of confronting the far right and demonstrating to minority communities that they have allies who will defend them. These faith and ethnic community institutions can be powerful deterrents to radicalization amongst a particular community’s vulnerable young men. But without Canada's civil society stepping up to counter these ideologies—and, as importantly, to diminish the economic accelerants of inequality and deprivation—it is difficult to imagine stamping them
out completely.

Evan Balgord is a journalist and researcher on the rise of the new far-right movements in Canada.