Bowman’s reversal on the Israel Relations Normalization Act points toward growing opposition to the diplomatic agreements within the broader progressive movement. 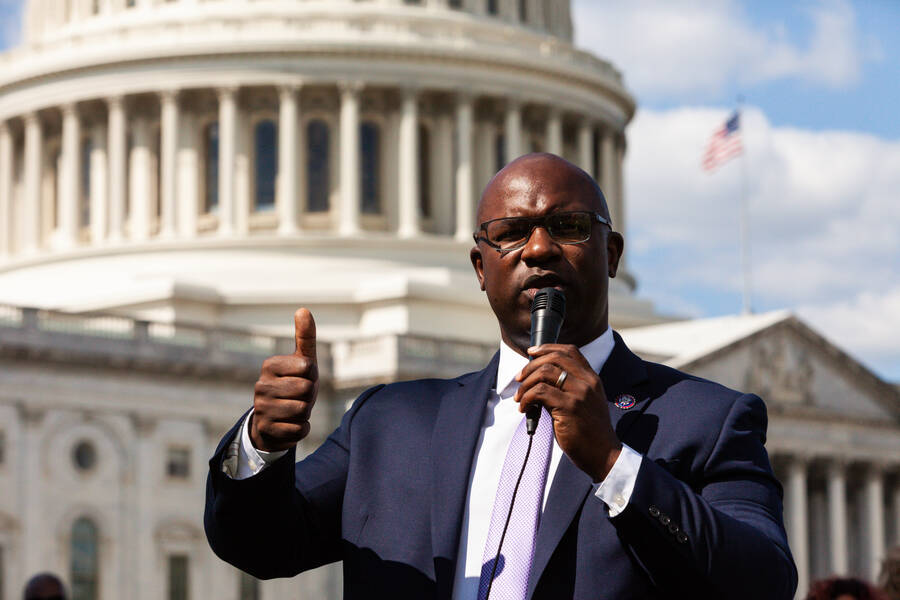 Rep. Jamaal Bowman speaking at the US Capitol on September 27th, 2021.

New York Congressman Jamaal Bowman plans to withdraw his co-sponsorship of legislation supporting Israel’s normalization agreements with Arab states, and will vote “no” when the bill comes up for consideration in the House of Representatives, according to a letter Bowman sent to his constituents today that was obtained by Jewish Currents. The bill in question, titled the Israel Relations Normalization Act, is supported by Israel lobby groups across the political spectrum, including the conservative AIPAC and the liberal J Street. The legislation directs the State Department to publicly outline a strategy to strengthen the normalization deals, known as the Abraham Accords, that were forged during the last year of the Trump administration, and which establish official diplomatic and trade relations between Israel and the countries of Sudan, Bahrain, Morocco, and the United Arab Emirates.

Bowman’s decision points toward a growing split in the Democratic Party over the question of the Abraham Accords. Like most legislation that affirms and strengthens the US–Israel relationship, the bill has overwhelming bipartisan support: So far, 330 representatives—about 75% of the chamber—have signed on as co-sponsors, guaranteeing that Bowman’s reversal will not prevent it from passing the House. But while 55 members of the House Progressive Caucus are co-sponsors of the bill (not counting Bowman, who cannot officially withdraw until he returns to Washington in person at the end of the month), 42 lawmakers have withheld their names, including all of Bowman’s fellow members of “The Squad.” Squad member Rep. Cori Bush, a Democrat from Missouri, told Jewish Currents she is opposing the bill because it “incentivizes neighboring nations to isolate the Palestinian people and ignore Israel’s apartheid rule.” The reversal from Bowman is especially revealing because, as a lawmaker with a substantial Jewish population in his district as well as ties to the Palestinian rights movement, he often straddles a fault line between the progressive edge of a mainstream consensus supportive of Israel and the left’s full-throated advocacy for the Palestinian cause. His about-face on the Israel Relations Normalization Act suggests the presence of growing opposition to the Abraham Accords within the broader progressive movement.

In the letter to constituents, Bowman wrote that, while he originally supported the legislation because he saw it “as an opportunity to make progress toward justice and healing in the Middle East as well as a path to a two state solution,” his recent trip to the region as part of a J Street delegation convinced him otherwise. “My experience on the ground and further conversation with constituents led me to see that it is not the right step to fulfill these goals,” he wrote. “Furthermore, I became aware that the deals that this bill supports and seeks to pursue, have included deals at odds with human rights and safety for everyday people in the region.”

The Abraham Accords capped a major shift in Israel’s regional position. Neighboring Arab states have historically maintained a boycott of Israel, though relations began to improve after the Jewish state signed peace deals with Egypt in 1979 and Jordan in 1993. During the presidency of Barack Obama, the Arab states that border the Persian Gulf covertly thawed diplomatic relations with Israel. Alarmed by the Arab Spring uprisings and the subsequent rise of political Islamist movements linked to the Muslim Brotherhood, the authoritarian monarchies of Saudi Arabia, Bahrain, and the UAE sought to buy surveillance technology from Israel to monitor internal dissent. The Persian Gulf states also drew closer to Israel over a shared opposition to both Iran’s nuclear program and the 2015 US–Iran nuclear deal. In 2020, some of those previously clandestine diplomatic relationships moved into the open with the signing of the Abraham Accords. That August, then-Prime Minister Benjamin Netanyahu dropped his plan to annex West Bank settlements to Israel in exchange for the UAE’s agreement to a “full normalization of relations,” including the opening of embassies in Tel Aviv and Abu Dhabi, the institution of direct flights from Israel to the UAE, and the strengthening of economic ties. Normalization agreements between Israel and the governments of Bahrain, Sudan, and Morocco soon followed.

In Washington, the agreements were overwhelmingly welcomed as historic peace agreements by both Democrats and Republicans. But some regional experts and progressive activists argue that the real purpose of the agreements was to strengthen an anti-democratic regional alliance between the US, Israel, and the gulf states’ authoritarian governments for the primary purpose of opposing Iran. The Trump administration doled out rewards to countries that normalized relations with Israel: It green lit the UAE’s purchase of sophisticated fighter jets, recognized Morocco’s sovereignty over the annexed Western Sahara, and removed Sudan from the US list of state sponsors of terrorism. “This bill is an endorsement of Trump-era business deals with authoritarian regimes that masquerade as ‘diplomacy’ and ‘peace,’” said Beth Miller, senior government affairs manager at Jewish Voice for Peace Action. “Simply put, it’s bad foreign policy and at odds with everything progressives in Congress are fighting for.”

Democrats and Republicans alike have argued that the Abraham Accords pave the way toward a future agreement between the Israeli government and Palestinians. But progressives argue that, contrary to the Washington consensus, the accords only put a Palestinian state further out of reach. The deals “reward Israel for maintaining a status quo that is harmful to peace and harmful to Palestinian rights,” said Khaled Elgindy, a senior fellow at the Middle East Institute. “One of the points of leverage to make progress [on two states] was other countries withholding their recognition [of Israel].” Now, he warned, “There are even fewer incentives.”

Bowman’s withdrawal of sponsorship suggests that the Palestinian rights movement’s argument against the accords is gaining at least a small amount of traction within the Democratic Party. Elected in 2020 with the backing of a coalition of progressive groups, Bowman—who replaced top AIPAC ally Eliot Engel—represents New York’s 16th District, a majority-Black and Latino swath of the northern Bronx and southern Westchester County that is about 11% Jewish. (Under new district lines signed by New York Governor Kathy Hochul earlier this month, Bowman is losing the heavily Jewish community of Riverdale, in the Bronx, but gaining locales in northern Westchester and Putnam counties that include Jewish communities as well.) Since arriving in Washington, he has navigated often-contradictory demands from his progressive supporters and his Jewish constituents, many of whom hold favorable views of Israel. His voting record reflects this tension: Last year, he co-sponsored Rep. Betty McCollum’s bill to bar US aid from being used by Israel’s army to perpetrate certain human rights abuses against Palestinians, and joined an effort led by Rep. Alexandria Ocasio-Cortez and other progressives to block the sale of $735 million in bombs to Israel during its May assault on Gaza. But, in September, Bowman also voted “yes” on sending Israel an extra $1 billion in military aid to fund the anti-rocket Iron Dome system, a move sharply criticized by Palestinian rights activists. In November, he participated in a J Street-sponsored delegation to Israel, which led some chapters of the DSA to call for his expulsion from the organization. In December, the DSA’s National Political Committee declined to expel Bowman, but said DSA would not endorse him for re-election in 2022 unless “he is able to demonstrate solidarity with Palestine in alignment with expectations we have set.”

In removing his name from the Abraham Accords bill, Bowman is breaking ranks with J Street, which endorsed his re-election campaign, and joining progressives who have taken a harsher line on Israel. Political opponents will likely seize on the change; Bowman is already facing multiple primary challengers, including at least one with more hawkish views on Israel. His change of heart will also likely lead to backlash from some Jewish leaders in his district, who have previously protested his support for bills to advance Palestinian rights. At the same time, the decision to oppose a bill embracing Israel’s diplomatic deals with Arab states could help Bowman solidify his relationship with DSA and the broader left. Justin Charles, a member of DSA’s National Political Committee, said it’s too soon to say whether the vote will impact Bowman’s chances of being re-endorsed by the group, but that “it does signal movement in the right direction.”

In his letter to constituents, Bowman expressed concern that the normalization agreements could threaten human rights in the Middle East, emphasizing the dangers of the US’s “recognition of Morocco’s control over Western Sahara, and conversations about arms sales with the United Arab Emirates.” US support for the accords “unhelpfully isolates Palestine and Western Sahara when what we need is a process that engages them,” Bowman wrote. “In the end, it is my estimation that these actions will only escalate violence in the Middle East and make already vulnerable communities less safe.”