How Jewish Organizations Are Responding to the Kurdish Crisis

Jews and Kurds share histories of exile and persecution, but the US and Israel’s geopolitical interests complicate solidarity. 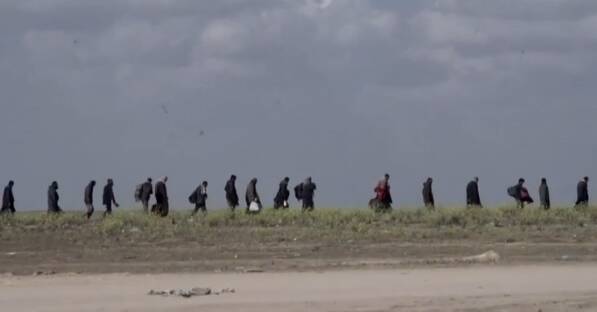 LAST MONTH, during a call with Turkish President Recep Tayyip Erdoğan, Donald Trump greenlit Turkey’s invasion of Kurdish-controlled territory along its southern border by agreeing to unilaterally withdraw US troops from northern Syria, forcing tens of thousands of refugees to flee Turkish attacks. Meanwhile, Syrian government forces are moving to reclaim Kurdish territory amid reports of the mass escape of ISIS prisoners, abandoned by Kurdish guards forced to desert their posts. In short, the de facto Kurdish socialist state of Rojava that emerged out of Syria’s brutal civil war, and which served as a loyal and improbable US ally, has been abandoned.

Long persecuted and spurned by their neighbors amid the shifting geopolitics of the Middle East, the Kurds now once again face ethnic cleansing and removal from their ancestral homeland. It’s a story that in many respects mirrors that of the Jews, another diasporic people that has survived centuries of persecution and attempted genocide. American Jewish commentators, from conservatives like the late William Safire to left-wingers like Noam Chomsky, have long championed and expressed solidarity with the Kurds, and Israel has long provided them with training and support. But how are Jewish organizations in the United States responding to Trump’s troop withdrawal?

Whether the objections come on humanitarian or national security grounds, it’s clear that Trump’s decision is unpopular with both American and Israeli Jews. From hawkish neoconservatives set on maintaining geopolitical control, to leftists inspired by Kurdistan’s egalitarian democratic confederalism, the overnight withdrawal of American forces has shaken broad swaths of the Jewish community.

Out of the eight leading Jewish organizations contacted for this piece, five—the Anti-Defamation League (ADL), the Zionist Organization of America (ZOA), the American Jewish Committee (AJC), the Jewish Federations of North America (JFNA), and the American Israel Public Affairs Committee (AIPAC)—all declined multiple requests for comment. Only some of these groups have commented publicly on the situation in Rojava.

On the right, Jewish organizations have been quick to point out the increased security risk to Israel that a destabilized northern Syrian could bring. “A US troop withdrawal from Syria would embolden Iran’s hold on Syria, endangering Israel and US interests,” Mort Klein, president of the right-wing ZOA, told the Jewish News Syndicate last month. “In addition to empowering Iran on Israel’s northwest border, the dangers of withdrawal include sending a message that the United States may be willing to abandon allies who are also a strong supporter of Israel.”

Klein’s statements mirror those of Israel's embattled Prime Minister Benjamin Netanyahu, who has pledged to “extend humanitarian aid to the gallant Kurdish people” while also condemning Erdoğan’s invasion as a serious threat to the stability of the region and to Israel.

David Harris, the CEO of the center-right AJC, has described watching the events affecting the Kurdish community “with horror and anguish,” adding, “Innocent lives are being lost as we speak, while the U.S. government turns its back and the U.N. Security Council is rendered impotent by Turkey and Syria’s friends.”

The ADL’s response was more vague, and declined to assign explicit blame. A statement released in response to the recent death of ISIS leader Abu Bakr al-Baghdadi concludes: “Unfortunately . . . minority groups in Syria are still threatened by violence from both the Islamic State and other military actors, and it is therefore imperative that the U.S. and others do more to ensure they are not targeted.” The organization’s decision not to advocate for the Kurds by name is in line with its having long listed the Kurdistan Workers Party (PKK)—the Turkey-based Kurdish faction ideologically aligned with their Syrian counterparts—as a terrorist organization.

Unusually, the organized Jewish left seems to broadly agree with these right-wing and centrist organizations on the catastrophic nature of Trump’s unilateral withdrawal from Syria. At a solidarity rally for the Kurds held in New York last month, Jewish Voice for Peace (JVP) member Rosalind Petchesky condemned the mortal hypocrisy of abandoning the Kurds. “Like Palestine and Kashmir, the Kurds of Rojava have had to battle not just their immediate fascist oppressor—whether Israel, India or Turkey—but also the life-destroying consequences of imperialist ‘deals’ that put power, money and arms over people,” Petchesky said.

A spokesperson for JVP told me something similar: “Jewish Voice for Peace joins in solidarity with stateless people and indigenous communities across the world . . . We are devastated by the latest violence inflicted by the Assad and Erdoğan regimes on the Kurdish people, and by our own government’s continued exacerbation of this violence.”

Emily Mayer, co-founder and political director of IfNotNow, expressed sympathy for the Kurds and called on Jewish organizations to recognize the danger of allying with Trump, whose treatment of the Kurds suggests that he might be a similarly unreliable ally to Jews. “Our primary concern is with the Kurdish people and all in Syria who long for a better and brighter future,” Mayer told me. “This is just another example of the horrific Middle East policy of the Trump Administration, from pulling out of the Iran Deal to moving the American embassy to Jerusalem. Jewish institutional leaders who align themselves with Trump because of his support for Israel should take note: there is no safety with Trump, he is not our friend. He is only interested in himself and his business interests.”

J Street's vice president of Government Affairs, Dylan Williams, also condemned Trump’s role in stoking the conflict unfolding in Syria while emphasizing the strategic damage his actions will incur. “The abandonment of the Kurdish people is emblematic of Trump’s reckless, unstable and self-serving foreign policy,” Williams told me by email. “It shows again that U.S. interests and those of our closest allies don't factor into his venal, incompetent decision making, even on matters of life and death.”

It’s worth noting that Trump’s troop withdrawal is not the first time the Kurds have been betrayed by the US or its Israeli allies. Despite offering training and material support to Kurdish militias during the 2000s, Israel simultaneously sold more than $500 million worth of heavy weapons to the Turkish government during the same time period. Some of these weapons are now being used against the very Kurds Netanyahu hailed last week as “gallant.”

Last month, the International Legal Forum (ILF) launched a Kickstarter campaign, aided by both Jewish and Kurdish NGOs, to raise money for Kurdish people displaced by fighting. Speaking to the Jerusalem Post, Yifa Segal, director of the ILF, reflected on the similarities between the plight of Jews and the Kurdish population of Syria.

“What happened with the Jews 70 years ago [the founding of the state of Israel] should have happened for the Kurds 100 years ago,” Segal said. “It didn’t. And there have not been too many opportunities for the Kurds to gain some form of independence, or at least safety or autonomy—or even living freely in the countries in which they reside.”

For the most part, however, Jewish organizations are refraining from drawing the obvious parallels between Jewish and Kurdish history. It’s one thing to condemn a strategic decision that non-Jewish observers also widely see as disastrous; it’s another to commit to a deeper and more principled alliance that Israel itself has been all too willing to betray.

At least for some of those who have fought on the frontlines in Syria, the link between the Kurdish and Jewish struggles is a central motivator. A Jewish American anarchist fighting in Rojava recently told Jewish Currents that “among the Americans going to Rojava today, a lot of them are Jewish.”

“[I]t’s about having empathy for what the Kurds are going through in the first place,” he added. “There are so many similarities to Jews who were restricted to the ghettos or to the Pale. You’d have to be blind not to see them.”

Daniel Boguslaw is a writer and researcher living in New York.

Report
Progressives Introduce Legislation to Force US Investigation into Israel’s Killing of Shireen Abu Akleh
The amendment comes after the State Department released a waffling statement on the death of the Palestinian American journalist.
Alex Kane
Report
Progressive Lawmakers Demand Stop to Israeli “War Crime” in Masafer Yatta
In a letter to the Secretary of State, 15 House Democrats urged the administration to intervene against the expulsion of Palestinians from West Bank villages.
Isaac Scher