An excerpt from the novel SADNESS IS A WHITE BIRD by Moriel Rothman-Zecher. 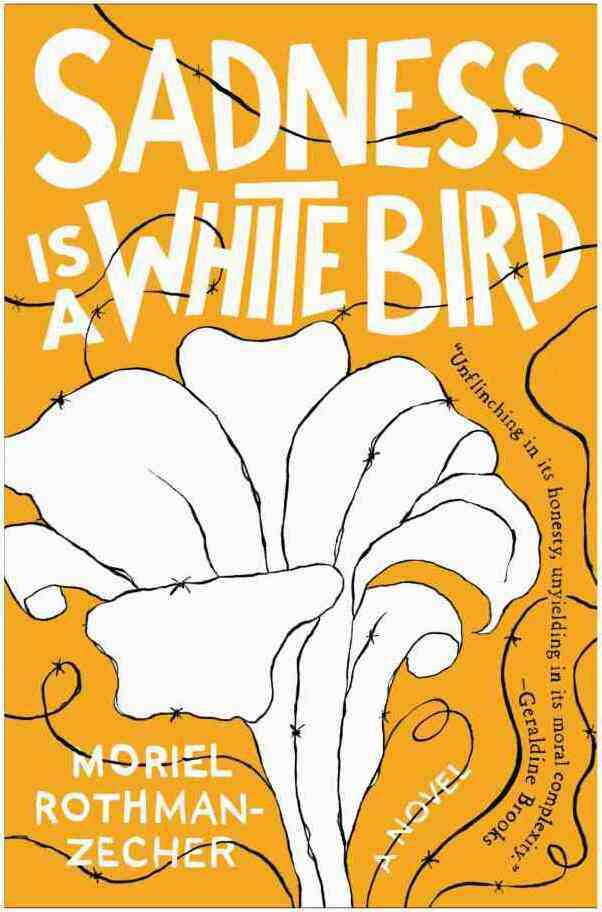 THE WALK was exhausting. It was well after noon and so hot out, and we barely made it a third of the way up before you stopped, lit a cigarette, and suggested we go back to the pool.

Nimreen glared at you, took your cigarette from between your fingers, and threw it down the side of the mountain.

I watched as the little orange ember tumbled at the end of the white stick, and cringed as I thought of forest fires, but there were barely any shrubs even, out here, it was all baldness and hardness, and the ember extinguished, and nothing caught on fire that day, or maybe everything did and we just didn’t notice. Thirty minutes later, we were back in the pool, floating and splashing and laughing.

And then I remembered. “Oh fuck, you guys!”

“What?” you both said, at once, your four identical eyes trained on my face.

I didn’t answer but instead swam over, quickly, to where the lifeguard was seated.

“It’s all right,” he said, “you should just hitchhike. It’s cool. Everyone does. There aren’t really any Arabs down here, nothing to worry about, bro.”

I was glad that you and Nimreen were out of earshot, didn’t hear my silence, my obsequious “Thank you, bro,” the splash of shame as I dunked underwater and swam back toward you.

“What was that about?” Nimreen said. “Were you reporting two Arabs spotted lurking in the shallow end?”

“No reports,” I said, pushing my hair off my forehead and to the side, in a motion I’d picked up from you over the past months. “We just missed the last bus, because of Shabbat.”

“Oh God of Moses and Ben Gurion,” you said, raising your hands above your head and looking skyward, “we are but two lowly gentiles, who know nothing of your ways. Spare us! Give us a bus home! And we’ll sacrifice this one, out of gratitude.”

“The lifeguard said that we should hitchhike,” I said.

“Hitchhike?” Nimreen said, furrowing her eyebrows, the piercing catching a glint of sun refracted off the blue chlorine clearness of the water. “Mm-hm. Are you all right, Jonathan? Sunstroke, maybe?” She placed her hands on either side of my face and peered exaggeratedly into my eyes, and I wanted her hands never to leave, wanted her lips to move just a few centimeters forward. Instead, I laughed and squiggled out of her grip.

You shook your head. “If we get chopped up into little pieces…”

“Then I’ll make sure to collect all of them and put them back together. Come on, guys, what are you so worried about? Relax!”

You and Nimreen exchanged a look, one of those looks, one of your looks.

“It doesn’t work like that, Jonathan. We don’t hitchhike,” Nimreen said. “This is not a safe country for us like it is for you.”

“What?” I said. “Come on. That’s what everyone says to Jews too, like, ‘Don’t hitchhike because you might get picked up and murdered by an Arab.’ Anyway, I’m with you. I’ll protect you!”

I flexed my biceps and made a scowling face, and then leapt into your arms, Laith, and you almost didn’t catch me, but then you did, and held me like a baby, supported by the buoyancy of the water, and I felt the heat of your chest, rising and falling with laughter, and Nimreen laughed too, and it was agreed that we’d try, because fuck it, so we put our clothes on and trudged down the hill, toward the crystal shimmering blue of the Dead Sea and the bus stop across the street from where we’d been dropped off, and within thirty seconds, a black jeep appeared down the road, and I stuck out my thumb and ignored your eyes and the car slowed and then stopped.

The passenger window rolled down, and I saw a very pretty woman smiling at me from the shotgun seat. She had dark eyes and heavy eyelashes and looked to be in her early twenties.

Past her, holding the wheel, was a dark-skinned guy. I glanced at him and noticed that he had a small kippah on his head.

“Will you, uh, make it before Shabbat?” I asked.

“That’s the plan,” the guy said, smiling with all his teeth. He must have been about my age, maybe a year older. He was wearing a sleeveless shirt, and his arms were thin and covered with dark helices of hair. “Hop in.”

“You have room for three?” I said.

“Of course!” the woman said.

“Come on,” I said, in English, to you and Nimreen. I noticed now that both your faces looked strained, but there was nothing to be done at this point, right? We needed to get home, and these two were clearly not the type to chop us up into pieces.

Nimreen walked slowly around to the other side of the car and got in behind the driver. I slid into the middle, and you got in on my right. I liked feeling each of your thighs pressed against mine, but I could also sense the subterranean discomfort radiating from your bodies.

We started moving, and the woman introduced herself, in Hebrew, as Yael.

“And this is my brother, Shimon.”

“Nice to meet you,” I said quickly, skipping past the stage where we might say our names, eyeing Shimon’s kippah a little warily, as if it were a creature that might lunge at us. I knew that this wasn’t fair: my own father wore a kippah sometimes, and he was nothing but gentle. But still. You and Nimreen didn’t say anything.

“What were you doing down here?” I asked.

“Amazing!” Yael said. “It was like being connected to two giant birds.”

“What are your—” Yael started.

I swallowed. Givat Avinu, as in the Israeli settlement of Givat Avinu in the West Bank. Speaking of which, I realized that as Yael had said that, we had just crossed over the checkpoint, into the West Bank, from the South. On the way down to Ein Tzvi, which is on the Israeli side of the border, the bus from Jerusalem had glided through the West Bank, as was its route, but none of us mentioned it: somehow, being on a bus made us feel removed from the world around us. It had its path, and we could either join or not. Now, though, the crossing felt different.

“Oh, uh, what are you doing in Akko, Shimon?” I said, changing the subject again.

“It’s the Jewish military yeshiva in the middle of an Arab neighborhood that is trying to turn Akka into a place for Jews only,” a fourth voice joined in, in Hebrew, low and familiar: Nimreen. The air in the car froze like dry ice, fragile and chemically strange.

Yael twisted around in her seat, and words began to pour out of her mouth. “Oh, wow, you, uh, you speak Hebrew? I thought you were tourists…I heard…Weren’t you speaking English earlier?”

“I’m originally from the US,” I said quickly, glancing over to Nimreen, trying to speak to her with my eyes, without words, the way the two of you always did, but she wouldn’t return my gaze. I looked over to you, to ask for help, but your eyes were focused on something else also. Your eyes were exactly your sister’s eyes, in that moment.

“We speak Hebrew,” you said, your voice soft, your r s rolling like the hills on the Jordanian side of the Dead Sea. Medabrrrim ivrrrit.

“Where are you f-f-f-from?” Shimon asked.

I peered over his shoulder at the speedometer. We’d hit 140 kph. I didn’t know what that was in miles per hour exactly, but it felt a little fast.

“Us?” Nimreen said, her voice too calm, which I recognized, by this point, as a sign that she was angry. Akka was to Akko as al-Birwa was to Ahihud, except that Arabs still lived in Akko/Akka. And this Yeshivat Hesder was implanted there, according to Nimreen, to make that not the case. Shimon and Yael didn’t contradict her. I couldn’t blame her for what she said next, but still I cringed, thinking, Nimreen, there’s so much left for us to live for, thinking, Nimreen, I adore you, thinking, Nimreen, let’s move to Akka, teach our babies Arabic and Hebrew and English and Espanyol, for good measure, thinking, Nimreen, we’re doomed.

“I’m Jewish,” I said, my voice as gentle as I could make it.

“I wish I’d had a bar mitzvah,” you said, chuckling as if nothing were amiss.

We were now going 160 kph down this thin ribbon of road.

“We are definitely Arabs,” Nimreen said, “very much so. Is there a problem with that?”

“I think it-it-it-it-it is a prob-prob-prob-prob…” Shimon’s stutter had grown heavier; he sounded like he was on the brink of tears. I felt a strange urge to climb up into the front seat and kiss both his eyelids.

The car had started shaking.

“It’s cool, my friend,” you said, your voice steady. “Everything is cool.”

“I promise you everything is cool,” you said, and even I felt calmer, hearing your voice, Laith. “I promise.”

Then there was a squeal of brakes, and the car wobbled and skidded and eventually pulled to a stop on the side of the road. There was a heavy silence in the cabin. I thought, for a moment, that Shimon might pull out a weapon and execute us, all three of us, right there, and the headlines would read, “Arab Brother, Arab Sister, Arab-Lover Found Dead in West Bank Desert.” Sad, but not too sad.

He didn’t move, though. It was as if he were frozen. A statue, but one from which pain and confusion emanated like static from an old radio.

“It’s okay,” Nimreen said, in Hebrew. “We wanted to get out here anyway. In fact, this was exactly where we’d hoped to go. Really, thanks so much.”

“I’m sorry,” Yael said. She sounded like she was on the verge of tears also. “It’s just…”

You tugged your large frame out of the right side of the car, humming to yourself. I climbed out after you, quickly, just as Nimreen slammed the other door. I tried to close my door gently, but the Jeep sped off down the road, and I barely had a chance to shut it, and we were left standing there, in a patch of dust and scratchy bushes, our small backpacks in hand, stunned.

“Fuck you!” Nimreen yelled, in English, after the car. “I hope you fucking crash!”

I didn’t. I didn’t hope they’d crash. I hoped that they’d turn around and say that they were sorry and take us to Haifa, and that we’d have such a nice drive together that sweet, skinny Shimon would convince the others in his yeshiva that bigotry was not the way toward spiritual enlightenment after all. They didn’t turn around. The sun was starting to set.

Moriel Rothman-Zecher is the author of the novels Sadness Is a White Bird, for which he received the National Book Foundation’s ​“5 Under 35” honor, and Before All the World, which will be published by Farrar, Straus and Giroux in November. His poetry has been published or is forthcoming in Zyzzyva, Barrelhouse, The Common, Paper Brigade, Colorado Review, and elsewhere.

Fiction
An Artist’s Revenge
“Scowling, he grumbled to himself: It’s no wonder the rich view artists as their pawns, and art as their plaything . . . No one makes real art anymore!”
Wolf Wieviorka
Fiction
Baruch Hashem
I’m white trash. Jew trash. Immigrant trash. Girl-boy trash. I’m a Casanova without a cause.
Yelena Moskovich

Poetry
I Need My Blood
“I will not lock my blood inside my heart, / neither will I shed my blood for naught”
Itzik Feffer
Sign up for our email newsletter, featuring exclusive original content