A bad judge and a worse writer leaves American democracy with a political organizing crisis. 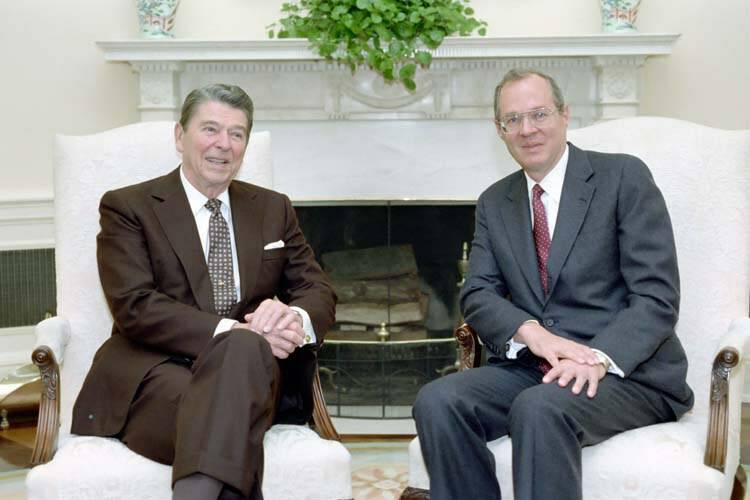 JUSTICE KENNEDY WAS NOT a good writer, and I dare you to find anyone who disagrees. One of his colleagues, Justice Antonin Scalia, wrote—in a published opinion in 2013—that Kennedy’s writing was essentially “legalistic argle-bargle.” (In another, he described Kennedy’s style as being “as pretentious as it is egoistic.”) Nor did Kennedy have any real judicial philosophy—larger ideas about the law that would permit him to be admired as a thinker, if not as a writer. Kennedy seemed to like the concept of “dignity” a lot, requiring pliant lawyers to litter their briefs with references to it, but how exactly it worked and what role it was supposed to play in constitutional theory were never really explained. Kennedy pretty much just went with whatever his gut told him was right.

And what his gut told him was generally awful. He was fanatically hostile to labor unions, criminal defendants, campaign-finance regulation, consumer-protection laws, and anti-discrimination statutes, to pick just a few examples. He dedicated the final dissent of his judicial career to a passionate argument that the police had the right to observe the location of every person in the country using their cell phone, with no Fourth Amendment restrictions. A few days later, he voted to uphold President Trump’s Muslim ban and (in a vote I am certain he deeply relished) deprive public-sector unions of agency fees in Janus. About 18 years ago, he cast the deciding vote that made George W. Bush president. A few weeks ago, he relied on the flimsiest imaginable evidence to conclude that a Colorado civil-rights commission had been hostile to religion when it required a baker to serve gay customers on the same terms as straight ones. He wrote—wrote!—Citizens United. He voted to strike down the entire Affordable Care Act—not just the now-repealed-anyway individual mandate, but everything: the Medicaid expansion, guaranteed-issue, community rating . . . root and branch, if he’d had his way, it would have been destroyed. He voted to strike down the Voting Rights Act’s preclearance provisions, which prevented places with long histories of racial discrimination from changing election rules without getting permission first. (As soon as he did, many such places immediately started changing election rules to disenfranchise people.) I could go on (and on and on and on). If Kennedy was a bad writer and a worse theorist, he was an execrable picker of outcomes.

I know what you’re going to say, of course. What about Obergefell? What about gay rights? It’s true that Kennedy’s gut did seem to sympathize with the rights of gay people. And while I have never heard anyone say that Obergefell is a particularly well-executed opinion, at least it meant that gay people could get married in all 50 states. (Well, sort of—try pulling that off in a community where you can lose your job for being out, or be refused service at every local shop, two things Kennedy didn’t seem to care about, as he demonstrated in his Masterpiece Cakeshop opinion.) And there are a small handful of other cases like that: while the opinions are not much to admire in terms of a judge’s work, hey, at least we aren’t (for example) executing children anymore after Roper v. Simmons. And didn’t he vote against overruling Roe v. Wade in Casey v. Planned Parenthood? Yes—although in a manner that trashed the relatively clear rules of Roe and replaced them with ones vague and open-ended enough to permit the present state of affairs in America, where abortion is, as a practical matter, illegal in many parts of the country. Still, for believers in abortion rights, Casey was—just barely—better than nothing.

But here lies the problem. Everything that was good about the results in those cases was achievable through conventional democratic organizing and politicking. Most people already supported same-sex marriage by the time Kennedy got around to saying he did, and many states had already recognized it. So while Obergefell probably accelerated same-sex marriage rights somewhat, in the end it was simply a response to political muscle that had organized on the issue, on the ground, and was going to win. (You could tell a similar story about abortion.) When he was “good,” Kennedy gave us nothing we couldn’t have gotten on our own.

But where Kennedy was bad, he left us far worse off—in need of a Constitutional amendment to repair the damage he did. If you want a halfway sane campaign-finance system or strong public-sector unions or for those married gay couples to be treated equally as a practical matter, you now have to organize a nationwide campaign in three-fourths of state legislatures (which is what it takes) because Anthony Kennedy weaponized the First Amendment to kill them. What Kennedy took from us, over and over, were things we can’t easily organize to get back; what he gave us were things we didn’t need him for. That is a poor legacy, even if one only cares about the results in particular cases—and as I noted above, there is no other conceivable ground on which to praise Kennedy’s work as a judge.

What Kennedy, more than anything, has left behind is a political organizing crisis—and that extends to the process of naming his replacement. His retirement will prompt another round of confirmation hearings, during which the Democratic Party will demand that the Republican Senate hold off consideration of a nominee to replace him until after the midterm elections. (The idea is that Mitch McConnell said that Merrick Garland, Obama’s nominee to replace Scalia, shouldn’t receive a vote because the vacancy arose near an election. This is even nearer to an election. So, fair’s fair, right?) And when the Republicans confirm Kennedy’s replacement anyway, they will be accused of procedural hypocrisy—possibly the least-effective political attack ever devised, and one that will not deprive Kennedy’s replacement of one iota of actual power.

The better way to react to Kennedy’s retirement, his miserable legacy, and the coming tilt of the Supreme Court even further to the right, is to begin organizing now for a bigger and more promising idea to change the federal courts. There have been many developed over the years, like eliminating life tenure for federal judges and replacing them with fixed terms, ensuring each president picks a standard number—so that we will not have the preposterous situation in which the Republican Party can lose the popular vote in six out of the last seven presidential elections and yet durably control the federal courts. Those are good ideas.

But an even better one is to correct that imbalance immediately by just increasing the size of the Supreme Court, also known as “court-packing.” The size of the Court has been changed several times in history—the Republican Party de facto reduced it in size after the death of Justice Scalia, when the Court operated with only eight members for a year and a half. When it was created in the late 18th century, it had six members. Now it’s nine. But it could be 13, or 15—and it wouldn’t take a Constitutional amendment to do it. Just an ordinary law passed by Congress and signed by President Whoever. (Eliminating life tenure, by contrast, would require a Constitutional amendment.) Filling up those seats with a half-dozen well-qualified young progressives would make Kennedy’s replacement basically irrelevant.

This plan will sound radical to the ears of most liberals, but it’s no more so than Medicare for All, abolishing ICE, or a federal jobs guarantee—and even if one’s tastes are more cautious, it’s likely still necessary for a more modest Democratic agenda. Imagine that President Kamala Harris ushers in a few more years of Obama-esque incremental progress—maybe a public option for the Affordable Care Act. Do you want to take your chances on a Supreme Court packed with Trump nominees upholding even that modest agenda (to say nothing of a far bolder one)? Are you sure?

People will criticize whomever Trump picks to replace Kennedy, who was himself an objectively bad justice. But let’s not forget that politics isn’t about being right—it’s about power. So, good riddance, Justice Kennedy—and #PackTheCourts.

Ian Samuel is a former law clerk for Justice Antonin Scalia and the co-host of the Supreme Court podcast “First Mondays.” He is currently a lecturer at Harvard Law School, and will join Indiana University as an associate professor of law this fall.