The pandemic exacerbates existing struggles for freelancers as the media landscape becomes even more precarious. 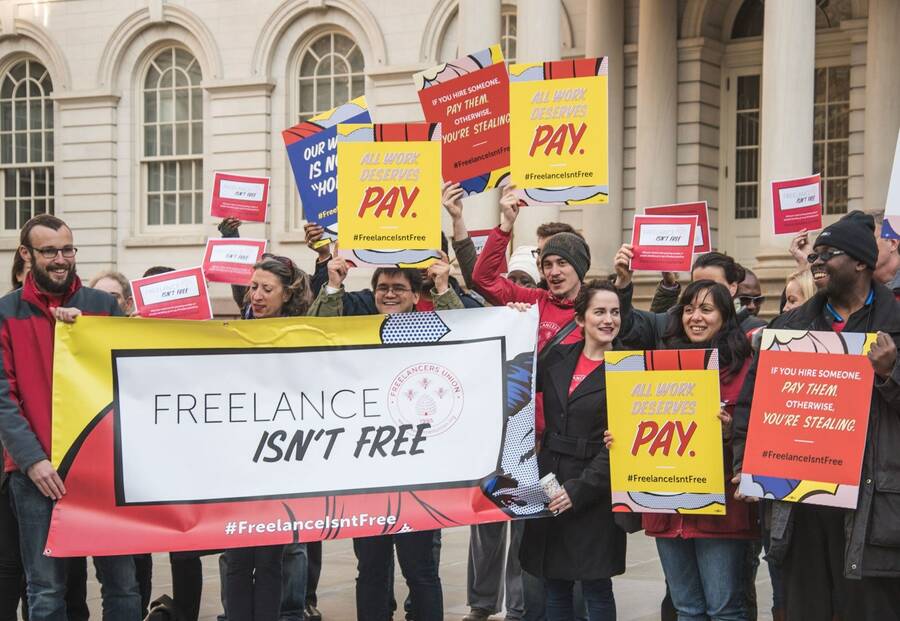 LAST WEEK, writer and journalist Erin Corbett noticed that she had been suddenly blocked from the editorial Slack channel at Fortune, where she’s been a regular contributor for two years. That’s how she learned that the magazine would no longer consider her pitches for the time being.

“It felt really shitty to find out like that,” she said. “I emailed my editor, who replied they had a meeting and decided they couldn't afford to have everyone on Slack and that they are freezing their freelance budget,” Corbett told me over the phone. She was told to keep in touch. Several other freelance journalists have also shared on Study Hall, an online freelance network, that editors at Fortune informed them via email that the freelance budget for new work had been frozen. (Editors at Fortune did not reply to my request for comment.)

Fortune is just one of many outlets that have turned away freelancers in recent weeks as the economic and cultural effects of the Covid-19 crisis have hit the already-distressed news business. Even as demand for quality media grows, the effects of a plummeting economy and locked-down society—including a steep decline in advertising revenue—are decimating media budgets. Many newspapers are cutting or scaling back their print editions; staff writers and editors at various publications have been laid off, given pay cuts, or put on furlough; and alternative weeklies are fighting just to see another day. At outlets that are managing to stay afloat, resources have been shifted to focus almost exclusively on crisis-related coverage. Freelancers, who rely on editors being consistently interested in diverse beats and having room in their budgets for commissions, are seeing opportunities dry up fast.

“I’ve been a freelancer since before the 2008 financial crisis. That was bad; this is worse,” said Noah Berlatsky, a Chicago-based freelance critic. “I’ve been doing this for a long time and I have never run out of work. But I haven’t gotten a commission in a week, and don't see prospects of getting any soon.”

Freelance journalists across the country have been sharing their experiences of editors turning their pitches down at alarming rates, and in some cases informing them that they will not be commissioning any freelance work in the foreseeable future. An ongoing Google Doc of outlets that have significantly reduced or simply aren’t taking freelance work has over 50 publications listed, among them Vox, Thrillist, Washingtonian, and TIME. Bustle Digital Media Group, which owns The Outline, Mic and Inverse, among others, froze its freelancer budget, and on Friday, it laid off the entire staff of The Outline, which it acquired only a year ago. VICE, a company with 3,000 employees and more than a dozen websites, has instituted a 90-day freeze on freelance contributions, according to five different journalists from Study Hall who received emails from different editors.

Britni de la Cretaz, a sports and culture writer based in Boston, told me she has already lost $15,000 worth of work that was already commissioned but has now been killed or indefinitely postponed by editors. She has had to quickly pivot from the longform, investigative sports features on sports she normally does to pitching quicker, more generalized stories for much lower rates. “I’m thinking short term, so my output has gone up but the rates have gone down, so I’m doing more work for less money,” she said.

Alex Blynn, a freelance writer and editor based in Brooklyn who writes about music and fashion, said that in the last couple of weeks his workload is down to a third of his usual output, primarily because music festivals and fashion shows are not taking place. “Culture is canceled for the foreseeable future,” Blynn said. “Everyone is so confused right now. It’s not that editors are ignoring me—I’m just not able to get the answers I'm looking for and I’m not sure they even know what they want to cover.” The situation is already impacting his ability to pay the bills, and he is worried the amount of pitches editors accept will continue to decline.

A features editor from a NY-based culture website who preferred not to be named for fear of not having his contract renewed told me the site is having a “company-wide freeze on the freelancer budget for the foreseeable future,” although they are honoring any work commissioned before the freeze was put in place. He said this is a loss for the publication: Virus related news is getting good traffic, but people are also looking for distractions, and losing freelance contributions has impacted “the diversity of voices that we have and the diversity of ideas coming from far afield.”

Most other editors I reached out to did not respond to repeated requests for comment on the reasons for their publications’ freelance freeze. But across the industry, one of the biggest causes of the media crisis is the drop in advertising revenue as businesses cancel programming or tighten their budgets. “Advertising, which has been doing a slow disappearing act since 2008, has been cut in half in the space of two weeks,” news industry analyst Ken Doctor wrote last week in Nieman Lab, a Harvard-affiliated site dedicated to journalism in the digital age. Alan Fisco, president of the Seattle Times in Washington State told Buzzfeed News on March 23rd that “virtually all entertainment advertising is gone, restaurants gone. Automobile advertising is starting to get impacted.”

“When you work in media and people start talking about a recession, you know that’s not good news for the industry,” said Brandy Jensen, who just lost her job as an editor with The Outline after two and a half years. “The paradox of how media is funded is that traffic numbers are up in most places. People are clicking and reading stories. But the business model perversely does not translate into more money,” she said, highlighting the fact that many sites owned by large media groups leave writers and editors with little to no power: “When you’ve got someone ten levels above you who is looking at you and your colleagues as a line item, it’s difficult to know how to advocate for yourselves,” she said. She believes it’s primarily the drop in advertising that led to the outlet’s closure, along with “a psychological signal that everyone needs to lockdown and start to be concerned.”

The situation is so dire that many newsrooms are considering turning to federal funding in the form of relief loans for businesses, breaking down a longstanding American notion that government support for the press compromises journalistic integrity. Other outlets are running fundraisers or taking advantage of new foundation money for coronavirus-related coverage. Independent journalists, meanwhile, have their own relief processes to navigate. While the government’s coronavirus stimulus package makes independent contractors, including freelance writers, newly eligible for unemployment benefits, many states have delayed the application process as they scramble to update their systems. Several organizations, among them National Geographic and the Pulitzer Center, have set up grants to help journalists who want to cover the coronavirus crisis. Some groups and foundations, including the Freelancers Union, PEN America, and the International Women’s Media Foundation are giving struggling writers the option to apply for relief money, generally in the form of one-time grants ranging from $500 to $2000.

The last few years have seen the emergence of a crop of organizations specifically designed to support freelancers—like Study Hall and the Freelance Solidarity Project (FSP), a division of the National Writers Union that organizes freelance media workers and helps educate freelancers on their rights. These groups are now being called to help their members navigate heightened obstacles.

“Even in a good economy, freelancers face struggles that people on staff don’t face,” said Daisy Alioto, the strategy co-chair for FSP. Alioto regularly deals with grievances from freelancers who don’t get paid on time for work they’ve done, or editors who sit on stories for years under pay-upon-publication freelance contracts. She says many outlets don’t prioritize paying freelancers when they do have money, so during a pandemic, that situation is severely exacerbated. “Outlets that are shuttering are going to default on payments. I’m already hearing some of that,” she said.

There have been organizing wins in recent years that may now prove crucial. For example, the Freelance Isn’t Free Act, passed locally in New York City in 2017 and considered a model for the rest of the country, guarantees any freelancers earning 1099 incomes the right to timely and full payments, and the protection from retaliation. The terms of this legislation prevents companies from using the current crisis to deny freelancers payments they are owed. But few other states—including the rest of New York—have such sweeping freelancer protections in place.

Alioto hopes the crisis will be a wake up call for the industry. “It’s an important paradigm shift for the country in recognizing how many people are struggling at no fault of their own. The media industry—like healthcare—has to go through these cataclysmic events for people to see how the model is broken,” she said. FSP, which has around 250 members, is continuing to provide guidance and resources for how freelancers can navigate this period, such as webinars on how to apply for unemployment. “Basic survival is the baseline of worker empowerment, so if the most we can do is to be a community for people who don’t have one, that is part of our mission as part of a labor movement,” Alioto said.