For the Biden Administration, There Are No Red Lines On Israel

At the J Street Conference this past weekend, Secretary of State Antony Blinken delivered a speech fit for AIPAC. 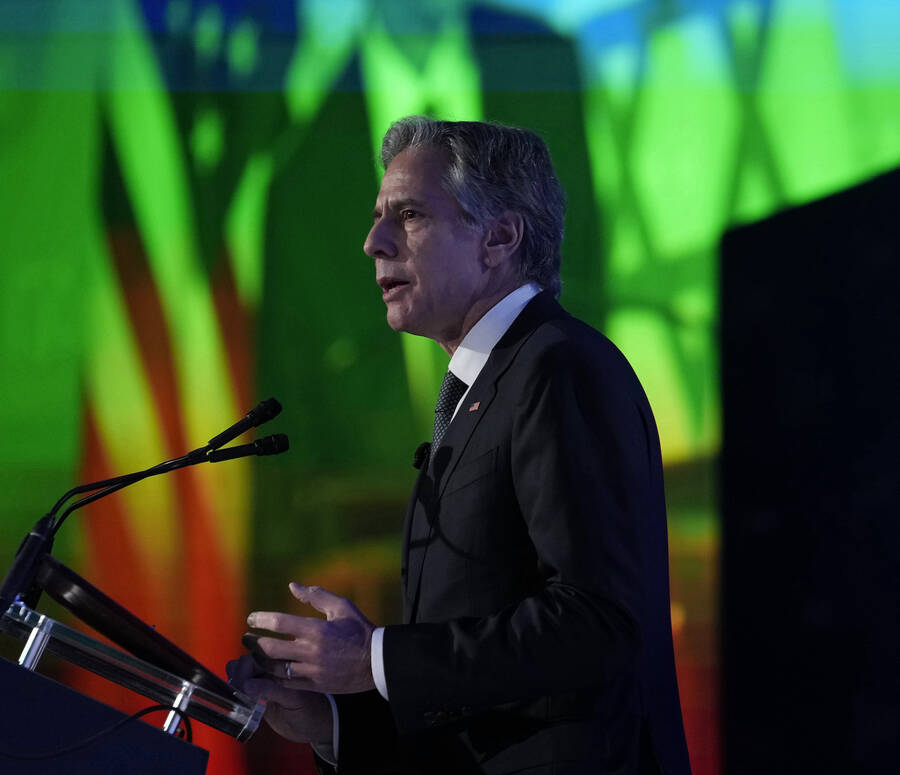 When J Street announced that Secretary of State Antony Blinken was speaking at its national conference, it raised the possibility that the Biden administration had finally had enough. Faced with an incoming Israeli government dedicated not merely to entrenching Israel’s control over millions of stateless Palestinians but willing to threaten those who resist with expulsion, perhaps the Biden administration finally found the contradiction between its words and its actions too great to bear. Since taking office, the president has repeatedly vowed that “human rights will be the center of our foreign policy”—even as his administration stood by while Israel criminalized Palestinian human rights groups and demolished homes in Masafer Yatta in the West Bank. Maybe when faced with the prospect of continuing to unconditionally subsidize a government that not only practiced apartheid but flirted with mass ethnic cleansing, the Biden administration would finally change course.

That hope has now been dashed. In his speech, Blinken didn’t part ways with Benjamin Netanyahu, Bezalel Smotrich, and Itamar Ben-Gvir. He parted ways with J Street. On Saturday night, when J Street President Jeremy Ben-Ami addressed the conference, he castigated AIPAC and other establishment Jewish groups that believe “the US should continue to provide billions of dollars without restrictions or oversight and protect Israel from any accountability in international institutions.” The next morning, from the same podium, Blinken endorsed AIPAC’s view. America’s “security assistance to Israel,” Blinken declared, “is sacrosanct.” He further boasted that “at the United Nations, we have consistently and vigorously pushed back against unjust anti-Israel bias.”

Why should the US feel a quasi-religious obligation to give Israel billions of dollars to buy US weapons irrespective of how it treats the Palestinians under its control? Why does the Biden administration—which often declares itself the defender of the “rules-based international order”—deem it unjust to apply international law to the Jewish state? Blinken didn’t answer these questions. Trying to do so would have led him into even deeper moral incoherence and strained the politeness of the J Street crowd. So instead, Blinken repeated the stock phrases without elaboration. Without any real justification, he committed a Democratic administration to unconditional support for an Israeli government filled with ministers so crudely racist that even AIPAC itself once declared them beyond the pale.
But it was even worse than that. Blinken didn’t even pledge to undo the gratuitous humiliations imposed on the Palestinians by Donald Trump. He didn’t promise to reopen the PLO mission in Washington or the US embassy in East Jerusalem, which was established in 1844 before being closed in 2019 by Secretary of State Mike Pompeo, a man who once called Barack Obama an ISIS sympathizer. Blinken didn’t say that settlements violate international law—another longstanding US position that Trump overturned and the Biden administration has failed to restore. Nor did Blinken repudiate the Trump administration’s embrace of the IHRA definition of antisemitism. The Biden administration still supports that definition, even though it could label as a bigot Palestinian Knesset member Ayman Odeh—who spoke at the J Street Conference a few hours after Blinken—for proposing that Israel be a “state for all its citizens” rather than one premised on the legal supremacy of Jews.

All this may not be entirely Blinken’s fault. His boss, Joe Biden, is a longtime AIPAC ally who as vice president resisted the Obama administration’s modest efforts to challenge Netanyahu. During the 2020 campaign, Biden called conditioning aid to Israel “outrageous.” But given that Blinken had so little to offer J Street’s audience, why did he come? The right-wing Washington Free Beacon quoted a state department official who called Blinken’s appearance “a blatant and obvious attempt to stick Bibi [Netanyahu] in the eye.” Perhaps some in the Biden administration felt that just appearing at J Street would send a message to Netanyahu and company that the Biden administration’s patience isn’t endless. But unfortunately, all the evidence suggests that it is. Never over the last two years have Israeli leaders even pretended that they were limiting settlement growth or seeking to negotiate a sovereign Palestinian state. Had those leaders paid a price for their intransigence, Israeli voters might have thought twice about electing figures like Ben-Gvir and Smotrich who would provoke additional US sanctions. But because US aid remains sacrosanct even when Ben-Gvir and Smotrich control top ministries, Netanyahu will feel less pressure to curb their efforts to effectively annex the West Bank. Nor is there much reason for Smotrich and Ben-Gvir to stop threatening Palestinians with expulsion.

No one familiar with Israel’s history—which involved mass expulsions in 1948 and 1967, and smaller expulsions ever since—can be sure that, if a full-scale war with the Palestinians erupted again, Smotrich and Ben-Gvir would not put their aspirations into practice. For years, polls have shown that large-scale ethnic cleaning enjoys significant popular support. At least two renowned Israeli historians, Tom Segev and Yehuda Bauer, have warned that it could happen. Another renowned Israeli historian, Benny Morris, has said he hopes it does. In his speech at J Street, Odeh recounted a conversation with the late Zeev Sternhell, Israel’s leading scholar of fascism, who wrote in 2019 that the demonization of Israel’s Palestinian citizens reminded him of the demonization of Jews at the beginning of the Nazi era. “Without democracy,” Sternhell warned, “it is not the failure, but rather the success of a minority that may trigger a deadly turn of events.” In the wake of Ben-Gvir and Smotrich’s election, Odeh echoed, “I fear we have already begun seeing another deadly turn of events.”

If such horrors transpired, would Blinken stop treating US aid and diplomatic protection as “sacrosanct”? It would be nice to think so. But the record doesn’t warrant such a view. It suggests that, when it comes to Israel, the Biden administration has no red lines, none at all.

Analysis
Antisemitic Zionists Aren’t a Contradiction in Terms
Pundits express surprise when antisemitism and Zionism overlap, but the ideologies share much in common—and many adherents.
Peter Beinart
Analysis
Israel’s Ascendant Far Right Can’t Be Understood by Analogy
In other countries, the right clashes with the center over the basic nature of the state—but Israel’s Itamar Ben-Gvir and his rivals are on the same page about ethnocracy.
Peter Beinart

Analysis
Antisemitic Zionists Aren’t a Contradiction in Terms
Pundits express surprise when antisemitism and Zionism overlap, but the ideologies share much in common—and many adherents.
Peter Beinart
Analysis
Israel’s Ascendant Far Right Can’t Be Understood by Analogy
In other countries, the right clashes with the center over the basic nature of the state—but Israel’s Itamar Ben-Gvir and his rivals are on the same page about ethnocracy.
Peter Beinart
Sign up for our email newsletter, featuring exclusive original content
Want original reporting and analysis on Israel/Palestine?
Sign up for the Tuesday News Bulletin.