Remembering a year of hell and devastation—the year of the Spanish flu. 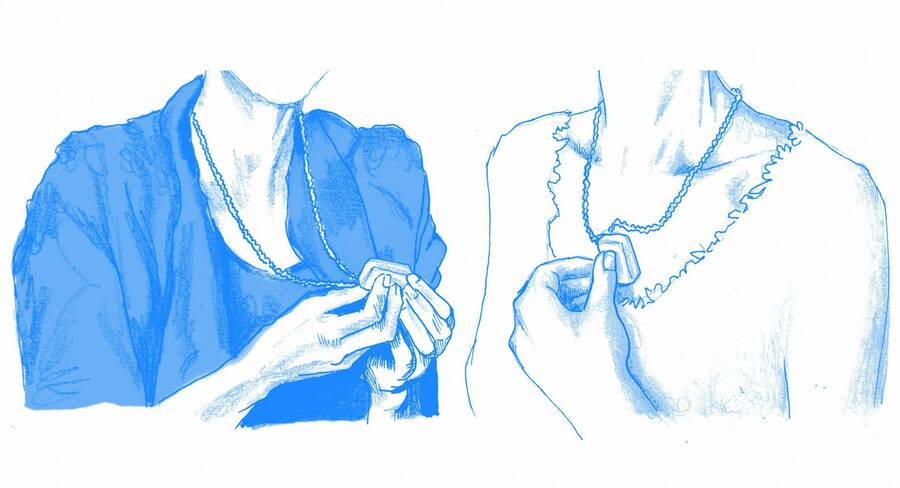 Rose Riegelhaupt (1906–1984) grew up in the Jewish community of Poughkeepsie, New York. She wrote this memoir, which was recently discovered in an old box of her papers, sometime in the late 1970s.

IT WAS THE YEAR 1918. It was a year of hell and devastation—the year of the Spanish flu.

I was 11 years old and had just moved to Poughkeepsie with my father and mother, my younger sister, and two baby brothers. By some good fortune we had all escaped any vestige of the flu, because the small town from which we came, in Washington County, on the border with Vermont, was free and clear of the bug which seemed to plague the big cities.

Convinced that it was the fresh air which protected us, my aunts who lived in Poughkeepsie rejoiced at our good health. To make doubly sure that the evil infection would stay away, they placed around each of our necks a cloth bag containing a large slab of camphor on a string. The camphor, they assured us, would ward off the bad germs.

After moving into our new apartment over the summer, my father opened his tailor shop. My sister and I tried to enroll at public school in the fall, but we attended for only a few short weeks. Hysteria had taken possession of the city. Ravaged by flu, the city closed its schools and movies and places of public gathering. Bars and restaurants closed. Fear clutched at everyone’s heart.

The disease, for some reason, seemed to strike at teenagers and the young. It hit with lightning speed. In a few days—often in 24 or 36 hours—it was all over, in spite of superhuman efforts by doctors. Pneumonia set in; there were no antibiotics. The death toll was high. We learned that it was a pandemic, sweeping the entire world, and that it had started with the soldiers in World War I and made its way through every country, like the Grim Reaper, cutting his swaths for harvest. Was it any wonder the people of Poughkeepsie trembled?

One day my friend Natalie met me in the street and told me the terrible news: “You know Bea Cohen, whose sister Gertie is in our class? Well, she died of flu, and was ill for only two days, believe it or not.” I burst into tears.

“Of course I knew Bea!” I exclaimed. I think she was just 18—a beautiful girl and so sweet. She had just graduated from high school and was engaged to be married to David Stein. Natalie wiped tears from her eyes.

“Can you imagine how David feels? How her parents feel?” she asked. “The funeral is today. They are taking her from the house to the synagogue right away. Do you want to go?”

“Do you think it’s safe, Natalie?” I wanted to go because I knew Bea—I’d been in the Cohens’ house many times with Gertie. But one couldn’t be too cautious in these matters.

“Of course it’s safe,” Natalie answered. “You’ll be out of doors in the street, won’t you?”

The Cohens lived on the third floor of a tenement with an exterior wooden staircase and a landing giving access to the apartment. When we approached the house we found that a hushed crowd of at least a thousand people had collected in the streets. What are all these people doing here? I wondered. Are they mourners or merely curious? I noticed classmates of Bea from the high school, the neighborhood butcher, the shoemaker, women from the synagogue with shawls over their heads. Not a murmur rose from this crowd—grim-faced and solemn they stood, as if by some signal assembling only on the sidewalks across from the building, leaving the hearse free access.

My friend and I joined the silent throng. Suddenly the door of the apartment opened and the rabbi came out onto the wooden landing. Then came the plain pine coffin borne on the shoulders of the girl’s father; her 16-year-old brother; her fiancé, David; his father; and two other men whom I did not know. The procession moved slowly down the stairs, followed by the girl’s weeping mother and her smaller brothers and sisters, among them my friend Gertie. “Death is her bridegroom now,” wailed one of the women in the crowd. “Death has chosen a beautiful partner,” cried another.

Hysteria spread through the multitude. We all wept audibly, as though a massive sigh emanated from us—wept for lost love, lost life, lost desire. We wept for the tragedy of dead babies who could not be saved; teenagers at the beginning of adult lives who ended up with ashes in their teeth; old people whose breath was snuffed out like candles on a birthday cake. Above all, we wept for ourselves, in our nameless terror and dread, our foreboding of evil to befall us. We wept for hopes that might never be realized, for dreams unfulfilled.

In unison we cried out, in our despair and grief, and I had the feeling that this expression of our anguish was in some sense a prayer for our own deliverance.

Rose Riegelhaupt (1906 – 1984) was an administrative assistant at the Graduate Center of the City University of New York, and a graduate of Cornell University.

Memoir
At Hutto
A lawyer reflects on his experience meeting with asylum seekers in a Texas detention center to prepare them for their credible fear interviews.
Michael Lieberman
Memoir
The Bookworm
When Yiddish books are destroyed, who will miss them?
Isaac Brosilow