Dozens of families occupied the Manhattan offices of the United States Immigration and Customs Enforcement on Thursday afternoon. 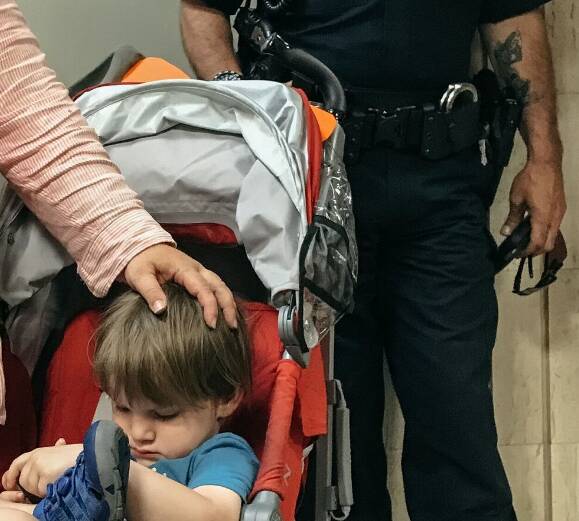 DOZENS OF FAMILIES occupied the Manhattan offices of United States Immigration and Customs Enforcement on Thursday afternoon, protesting the deportation of undocumented immigrants and demanding an end to the Trump Administration’s tactic of family separation at the US-Mexico border.

After cautiously moving through building security and a lobby guarded by Department of Homeland Security officers, the angry mass of parents, toddlers, strollers, and signs took over the 9th floor of 26 Federal Plaza just after 3 pm, filling a narrow hallway outside the office of New York ICE Field Office Director Thomas Decker. There they shouted in unison: “We are here today with our babies and families because we could not sit by and do nothing. Our children are here because they know the truth: locking up families is wrong.”

Thursday’s whole-family protest came barely 24 hours after New York City Mayor Bill de Blasio confirmed that 239 children previously separated from their parents at the border are currently being housed at a foster care facility in East Harlem. Since the beginning of May, the federal government has forced over 2,300 children out of the arms of their parents and into detention centers and the foster care system.

National uproar over the harsh treatment of families reached a breaking point last weekend after journalists were led on tours of detention facilities, and then printed what they saw. In Texas, 20 children were being kept in a single cage. In Arizona, some children attempted suicide.

Progressive organizers responded with a flurry of petitions and rallies. In Washington DC, Department of Homeland Security Secretary Kirstjen Nielsen was run out of a Mexican restaurant by the Democratic Socialists of America, and at this moment, a Portland, Oregon ICE facility sits empty—shut down by an occupy camp. Activists in New York took note.

“We’re definitely going to see more of that, and it’s totally necessary. People need to take matters into their own hands and hold their elected officials accountable,” Queens resident Felicia Martinez said Thursday. “We need to be doing these direct actions, and they need to be doing their jobs as electeds.”

Organizer Yotam Marom confirmed that no arrests were made during the Thursday occupation in New York.

While the chants and protest signs of Thursday’s rally bore familiar refrains (“We shall not be moved!”; “Families Belong Together!”), the protest at Federal Plaza was something new: it carried the weight of familial love. Couples and children shed tears as they voiced their horror at the effects of zero tolerance border policing. Whole families demanded justice for the separated.

At 2:30 pm, roughly 45 minutes before the occupation, Bethany Scott, 34, kneeled in Foley Square over a homemade sign that read “There Is No Such Thing As Other People’s Children.” Her two-year-old daughter Genie sat nearby with a marker, scribbling her own finishing touches.

“I want to be gathered with people who feel similarly and who think that there is hope for something better. That we deserve better and our children deserve better. The children who are in prison deserve better.” Scott told Jewish Currents she had contacted her congressman, Gregory Meeks, to do something about the Trump administration’s trampling of human rights at the border, only to hear him demur, speak about procedures, and claim his hands were tied.

“I’ve been looking for something to do, and [Meeks] really made me feel like we’re on our own,” Scott said. “As citizens, this is our project. We have to battle this on our own because no one’s here to save us.”

“I don’t give a shit about procedure. There’s children in cages. Shut up and do something,” she said.

A few feet from Scott and her daughter, nine-year-old Lucas played in a nearby fountain as his mother, Marrisa Senteno, waited for the right moment to enter the court building. The protest was deeply personal for them: Senton’s partner—Lucas’s father—is at risk for deportation.

“This is our everyday life—we live in fear but we try to have a normal family existence. What brings parents to bring their children across a series of borders is that you’re trying to ensure their survival,” Senteno said. That’s something that any of us will do.” Senteno works as an enforcement program manager at the National Domestic Workers Alliance, a non-profit that advocates for more inclusive labor protections for workers, regardless of their immigration status.

Senteno said she was unconvinced by the President’s day-old executive order ending family separations, calling it a hollow gesture meant to distract attention from ongoing indefinite detentions. When asked if ICE should be abolished, an increasingly popular position in left-leaning circles, Senteno quickly answered yes.

“As a system, [ICE] is built to criminalize and incarcerate. It’s functioned as a rogue entity for some time and is not protecting the United States at all.”

Felicia Martinez, who attended the occupation with her children, agreed. “ICE is a very recent entity. As a country we’ve forgotten that it’s possible to not have this type of internal enforcement,” she said.

As her phone’s alarm chimed at 3:15 pm, Senteno called out to her son and the two walked together toward the ICE offices. “It’s important that he sees his community and his family fighting for what is right, and fighting for his well being. It’s to make him strong and show him we’re not watching on the sidelines.”

Photo Essay
Portrait of a Movement
A photographer attempts to capture the face of contemporary socialism.
Scott Heins
Sign up for our email newsletter, featuring exclusive original content