Twin victories at the polls are a coming-out party for San Francisco socialists. Will more—and more radical—victories follow? 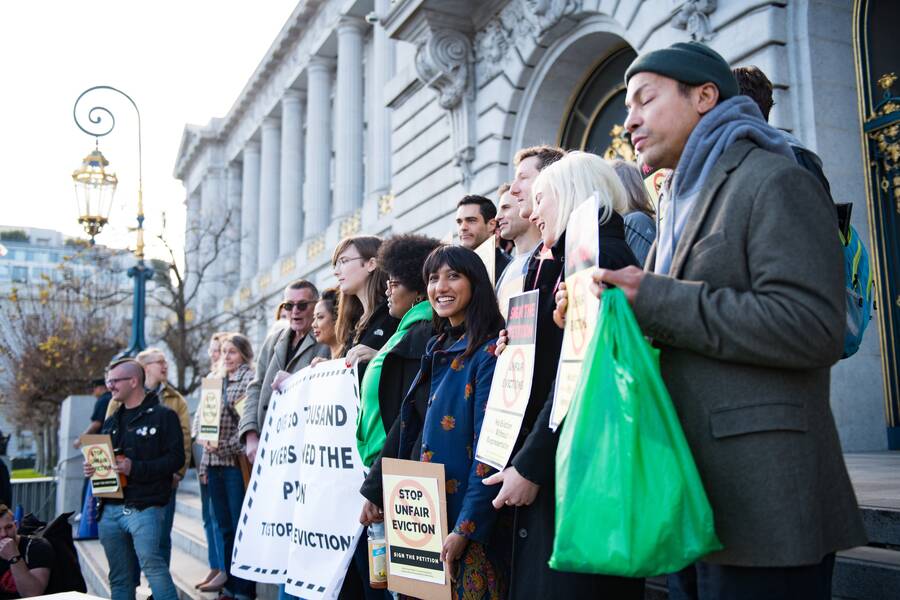 IN SPITE OF the city’s reputation, there was little reason to expect an effective leftist movement to develop in San Francisco after the election of Donald Trump.

The influence of nearby Silicon Valley and its stupendous riches steers towards a myopic, hyper-rational libertarianism. In the city, electoral politics has been dominated for generations by the billionaire-courting, centrist Democratic Party of Clintons and Feinsteins. (The last non-Democrat to hold elected office here was a Republican.) The “new” movements that draw national media attention are pro-housing, developer-aligned YIMBYs.

There is an argument to be made that the left-coast city’s whacked-out, far-left reputation was never really deserved, and exists only as a handy and lazy foil for Fox News. The legendary “capital of the hippies” was a military town that had, three years before the Summer of Love, hosted the Republican convention that nominated Barry Goldwater—and, a half-century before that, saw labor activists sentenced to death for a terrorist bombing in which they played no part, following a show trial rife with false testimony.

Ultra-expensive San Francisco is a bad place for socialists—for anyone, really, unless they are independently wealthy. And yet, during Tuesday night’s primary election, socialists won two major victories: over the California real estate industry and the police, two of the wealthiest, most powerful, and entrenched lobbies in state politics.

A voter initiative that grants tenants facing eviction the right to a city-funded real estate lawyer—Proposition F, the “right to counsel”—passed by more than 10 points. It is no exaggeration to say it is the biggest win for tenants in San Francisco since the institution of rent control 40 years ago. A second voter initiative, Proposition H, backed by the city’s reactionary police union, which would have removed restrictions on Taser use, failed by a 20-point margin.

These victories were not won by the popularity of socialist ideology alone: The police officers’ union has gone rogue often enough that it has become marginalized in city politics—it played virtually no role in the city’s mayoral election, which was held the same night. And two-thirds of city voters are renters, none of whom need a reminder of how precarious their positions are in the country’s most high-priced housing market.

But both successful campaigns—No on H, and Yes on F—were run by members of the San Francisco chapter of Democratic Socialists of America. Like the resurgence of DSA itself across the country, and its emergence for the first time in San Francisco, which had never had an active chapter before Trump’s election, you could say that the push towards Prop. F began on the night Donald Trump was elected.

That night, Dean Preston and Jen Snyder had two losses to ponder. Preston is an eviction-defense attorney and founder of the statewide renters’ group Tenants Together, who ran for a seat on the Board of Supervisors, San Francisco’s equivalent of a city council. Snyder left advertising to work in politics, first working on Bernie Sanders’ campaign in the California primary before joining Preston’s bid as deputy campaign manager.

On television, John Podesta was delivering Hillary Clinton’s not-quite-a-concession speech. And, closer to home, Preston was giving his own, after losing a bid by a narrow 52 to 48 percent margin, to Board President (and, after last week’s election, the likely next mayor) London Breed.

Right-to-counsel was one of the key promises in Preston’s campaign—and an obvious and sorely needed bulwark against the city’s growing homeless problem. On any given night, there are more people without homes in San Francisco than there are “sleeping rough” (the preferred euphemism) in all of the United Kingdom. And contradicting the well-trod myth that San Francisco is both magnet and catchment basin for the country’s unwanted, 69 percent of San Francisco’s homeless recently had homes in the nation’s most expensive city, according to the 2017 federal homeless count.

It was obvious something needed to be done—the most the city’s current mayor, Mark Farrell, has done, aside from make vague promises to build more temporary shelters, was to use the police to clear the streets of tent encampments. Preston campaign veterans wanted to use the network assembled during the failed Board of Supervisors campaign to organize around a “transformative policy to stop displacement.” But an equally necessary goal was to push the broader conversation in San Francisco towards “having your basic needs met by government,” said Snyder, who ran Prop. F along with other veterans of the Preston campaign, one of whom led her towards DSA in the months after November 2016.

Prop. F did have some inherent advantages. It had money: $10,000 in “seed funding” from Preston to kickstart the signature drive, and about $100,000 in total donations. There were also  endorsements from the local pro-development think-tank, the Democratic Party, and even the YIMBYs, who clash with DSA on nearly every other issue. Politics in San Francisco follow a “moderate-progressive” binary—meaning the most “conservative” politicians to hold office are moderates. “We had no shortage of moderate endorsements,” Snyder said.

Prop. F was also a one-sided campaign. No organized or well-funded opposition materialized—an indicator more of how dangerous it would be to anger renters than anything else. Future pushes for more “radical,” anti-capitalist housing policies, such as a vacancy tax, would likely trigger massive spending, blanketing the city with opposition messaging. (In this same recent election, cigarette giant R.J. Reynolds spent nearly $12 million on a failed effort to block a city ban on flavored tobacco products.)

Still, Prop. F served as “an incubator for us,” Snyder said. “It let us pop the hood of a campaign and see how it was run.”

“But this isn’t just about winning stuff,” she added. “This is about building a movement.”

Stiffer tests are coming down the pike almost immediately. In November, the first DSA SF-endorsed candidate will stand for a seat on the Board of Supervisors. At the same time, DSA is planning its first real, extended foray into a low-income community of color: organizing around the massive redevelopment project underway at a former Navy shipyard, the site of both a toxic EPA Superfund site and a massive, ongoing fraud scandal.

As a model to follow, Preston name-checks Ada Colau, who was elected mayor of Barcelona a mere 10 months after launching a socialist citizens’ platform.

But San Francisco is no Barcelona; it’s about half the size, far wealthier, and lacks a comparable tradition of left-wing political organizing. And how this nascent movement will perform matched against a powerful opponent actively fighting back remains to be seen. But at least, after Prop. F, “they know that we’re here,” Snyder said.

Chris Roberts is a writer based in San Francisco. He is a member of DSA SF, and worked (in a limited capacity) on the Prop. F campaign.