A trans interpretation of the story of Jacob and Esau. 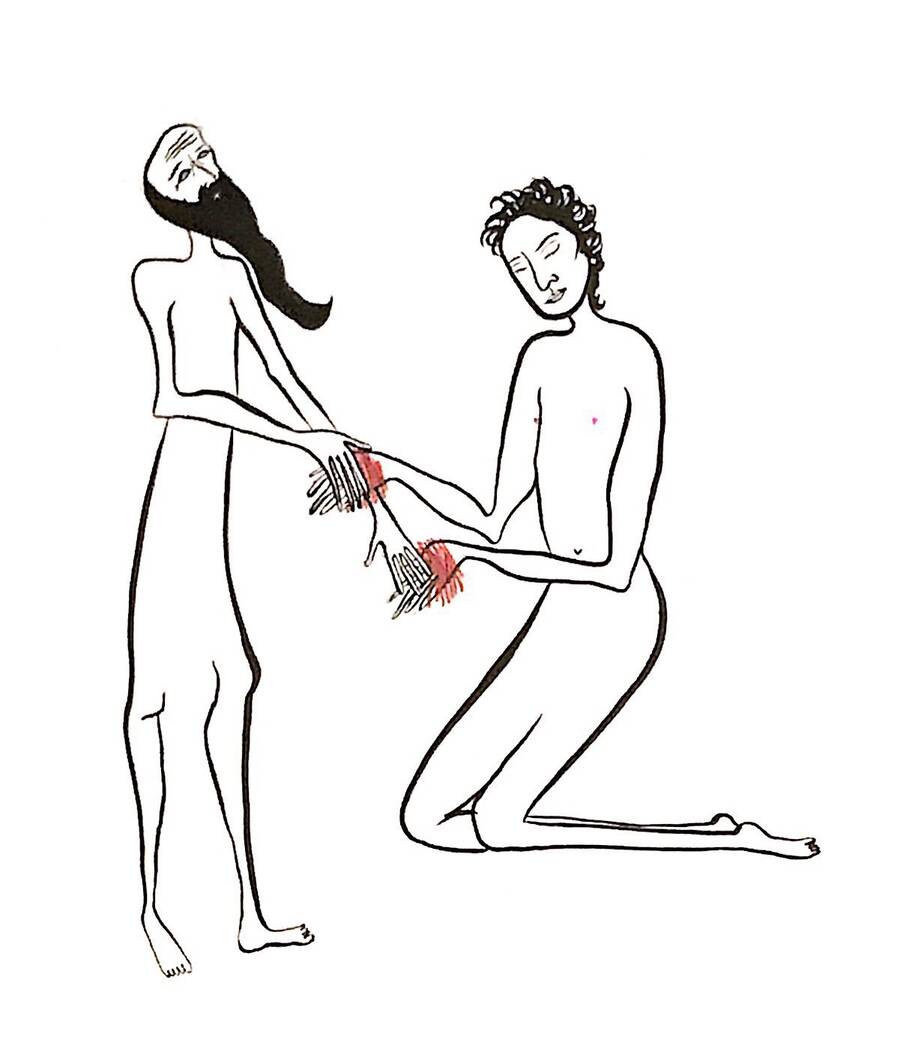 This essay was adapted from The Soul of the Stranger: Reading God and Torah from a Transgender Perspective (Brandeis University Press, 2018).

WHEN I WAS GROWING UP, my life was ruled by terror that my family would discover that I wasn't the boy they thought I was—that my male body and behavior were a disguise concealing the female gender identification I considered my true self. In the 1960s, the word “transgender” had not yet been adopted to describe people like me who do not identify with the gender we are assigned at birth, and it was years before I realized I wasn’t alone. But even as a child, every time I read Genesis' account of Jacob stealing his father's blessing by passing himself off as his more masculine brother Esau, I felt an uncomfortable twinge of recognition. I knew that, like Jacob's, the blessings I received from my family depended on me pretending to be a son I knew I wasn't.

I don't mean to suggest that the Torah portrays what we would now think of as transgender experiences. It doesn't describe anyone as being other than male or female, or as moving, as I have, from one side of the gender binary to another. But many of the stories in Genesis portray what I see as trans experiences, in which the patriarchs and matriarchs leave or disrupt their assigned gender roles. And in the case of Jacob's impersonation of his first-born brother Esau, one of these trans experiences becomes foundational for the Jewish people.

In the biblical story, the twins Jacob and Esau are both male, but as Genesis emphasizes, they are assigned at birth to very different male roles. Since Esau emerges from the womb first, he is considered the first-born, heir not only to Isaac's worldly possessions but to the relationship with God that Isaac inherited from his father Abraham. This law of inheritance, called primogeniture, creates a binary distinction between males who are first-born sons and those who aren't, a distinction so important that, like maleness and femaleness, it is determined at birth. Like the gender binary, primogeniture turns biology, in terms of birth order, into destiny, determining the way male children are raised and treated, the roles they are assigned, and the futures toward which they are steered. Esau, the first-born, is raised as the future head of the family, whose status and authority the second-born Jacob is expected to accept.

The Torah describes the brothers not only as different kinds of men, but as binary opposites, with Jacob in the position commonly thought of as “feminine” compared to the hypermasculine Esau: Jacob is “smooth,” Esau hairy; Jacob is domestic, Esau a hunter; Jacob is close to his mother, Esau to his father. None of these differences have anything to do with inheritance or birth order, but, like the social differences the gender binary attributes to men and women—differences that have nothing to do with physical sex—the Torah presents the differences between Jacob and Esau as though they were natural consequences of the roles they were assigned at birth.

And still, even before the twins are born, the Torah tells us that they will not ultimately be defined by their expected roles. Instead, God informs their mother Rebekah that “Two nations are in your womb . . . and the older shall serve the younger.” If the Torah embraced the view that human beings are permanently, inescapably defined by the biological roles into which we are born, Esau and Jacob would have performed their given roles as first- and second-born sons.

Jacob first tries to subvert his second-born role by insisting that Esau sell his birthright (the double share of inherited wealth to which he was entitled as first-born) for Jacob's stew. This outrageous demand, made on the spur of the moment, suggests that Jacob was ready and waiting for an opportunity to seize Esau's birthright, and thus that Jacob had for some time (perhaps all his life) had the trans experience of refusing to define himself in terms of the role he was assigned at birth. When he extorts the birthright from Esau, Jacob embarks on another form of trans experience, outwardly expressing his inward rejection of his born role: a male with the body of a second-born son but the birthright of a first-born. This culminates in his stealing of his father’s “innermost blessing,” which a blind and elderly Isaac wishes to bestow on the first-born Esau before he dies.

When Jacob impersonates his brother, he is not only trying to pass as Esau, but as a kind of man his birth, body, and upbringing say he isn't. Isaac is suspicious both of the way his son sounds and the way he talks, insisting on feeling Jacob's hands, to discern if he is really Esau. Anticipating her husband’s doubt, Rebekah wraps Jacob’s hands in goat skins to mimic Esau’s hairiness. While most of the Torah accepts the gender-binary assumption that people are defined by the gender to which we are assigned at birth, in this scene, the Torah portrays gender as something Jacob does, not something Jacob is. As gender theorists would say, in this scene, the Torah presents gender as performance rather than essence.

Torn between these conflicting signs of identity, Isaac decides to trust the hairiness of Jacob’s hands—the definitive sign that this is the hypermasculine Esau—and gives Jacob his blessing. By stealing this blessing, Jacob permanently changes his gender role to become a new kind of man; though still a second-born, he is now endowed with a first-born's spiritual legacy.

THOUGH THE TORAH doesn't portray Jacob as transgender, the scene in which he steals the blessing does portray one of the most painful forms of trans experience. In a feeling I knew well, Jacob fears that he won't pass, that his body will betray him, that he will be seen as a trickster, deceptively using gender signs (Esau's clothes, animal skins) to keep him from being identified with the body and role he was born into. As philosopher and transgender activist Talia Bettcher and others have noted, one of the most common transphobic stereotypes holds that transgender people are “deceivers,” using gender signs to manipulate others by fooling them into thinking we are someone other than we are. Of course, Jacob is a deceiver, trying to pass as someone he knows he isn't. But when I present myself as female despite being born and raised male, I do so to reveal, not to conceal, the person I know myself to be.

As many readers have noted, the scene in which Jacob presents himself as Esau to his father highlights not only Jacob's deception, but also Isaac's failure to recognize his son—a situation I related to acutely when I read it as a child. Even now, long after I’ve stopped pretending to be the son my parents believed me to be, I still feel sick when Jacob assures his blind father that he really is Esau, the son his father wants to bless. My heart breaks when Isaac says, “Come close and kiss me, my son,” and Jacob kisses him—when Isaac, inhaling the scent of Esau's clothes during Jacob's deceptive act of affection, exclaims, “Ah, the smell of my son is like the smell of the fields the Lord has blessed,” and Jacob silently accepts the blessing expressing his father's love for a son he knows he isn't.

But even though Isaac doesn't recognize his son, he knows something is wrong. Hearing Jacob's voice while touching Esau's hairiness gives Isaac a taste of gender dysphoria, the discomfort usually felt by those who experience a divergence between self-identification and external perception. But though it’s rarely named in these terms, gender dysphoria is not limited to transgender people; it can also be used to describe the confusion felt by someone trying to make sense of another’s gender. That is how Isaac seems to feel encountering Jacob dressed as Esau, saying, “The voice is the voice of Jacob, but the hands are the hands of Esau.” Isaac resolves this dysphoria by falling back on the belief that the physical markers of gender reveal who his son truly is: “He did not recognize [Jacob], because his hands were hairy, like his brother Esau's hands; and so he blessed him.”

Isaac's personal failure represents more than the danger of relying on gender markers to identify one another: it represents the triumph of God's will over the patriarchal system of binary gender, according to which biology (in this case, birth order) is destiny. No matter how strongly we may sympathize with Isaac's and Esau's sense of betrayal and disappointment, no matter how strongly we disapprove of Jacob's deception, if we identify ourselves as Jews or members of any of the many religions and cultures that grow out of the Torah, we have to root for Jacob to succeed. If he doesn't—if Isaac recognizes that Jacob is really a second-born “smooth” man rather than a hairy first-born hunter—Jacob will not inherit the relationship with God that makes him the father not only of a large family, but of the people to whom God gives the Torah.

The Torah presents gender roles as a means to God's ends, to be reinforced or disrupted as God pleases. God could easily have ensured that Jacob rather than Esau emerged first from Rebekah's womb. But in these stories, faithfulness to gender roles assigned at birth has little to do with faithfulness to God. The blessing Jacob receives depends on his willingness to go beyond the role to which he was born, to become a kind of person he was not supposed to be. God knows that we, like Jacob, are more than our biology, and in these stories, the Torah reminds us that like Jacob, we must sometimes follow God into the wilderness to find our true selves.

Joy Ladin is the author of 11 books, including The Soul of the Stranger: Reading God and Torah from a Transgender Perspective; a new book, Shekhinah Speaks, is forthcoming in 2022.